I always say, “If they can see it, they can be it.” Here’s my favorite illustration of that concept: A few years ago, I had the pleasure of meeting Vigdis Finnbogadottir, former president of Iceland. She told me that while in office, she would get letters from young boys asking, “Madam President, do you think a boy will ever become president?” Interesting, huh?

Turns out girls in the U.S. will have to keep wondering for a while.

The outcome of the recent presidential election has left many of us shocked and scared. We wonder how this could have happened. What do we tell our kids? How can we explain the depth of misogyny and bigotry in our culture, both the overt and the passively tolerated? Most importantly, what can we do to counteract it?

As you may know, for 10 years, the Geena Davis Institute on Gender in Media has commissioned in-depth analyses of family-rated films and children’s TV. For all of that time, I’ve been meeting with studios, networks, guilds and production companies — anyone who creates kids’ content — to share the research results and encourage a dramatic improvement in the number and quality of female characters. I may have even spoken at your place of work.

A Closer Look at Female Presidents in Movies, TV

We’ve been able to have an impact throughout the industry because the research so compellingly shows that female characters in kids’ media are often underdeveloped, sidelined or hypersexualized. They are used as plot devices, objects or eye candy. Or they are simply not there at all. Encouragingly, we have yet to leave a meeting without at least one person saying, “You just changed my project.”

So yes, we have seen some improvements, but we are not by any means done; we are nowhere near a tipping point. It’s urgent that we no longer create stories that teach children to view women and girls as second-class citizens — not when we’ve seen the level of sexism in our culture so egregiously put on display. 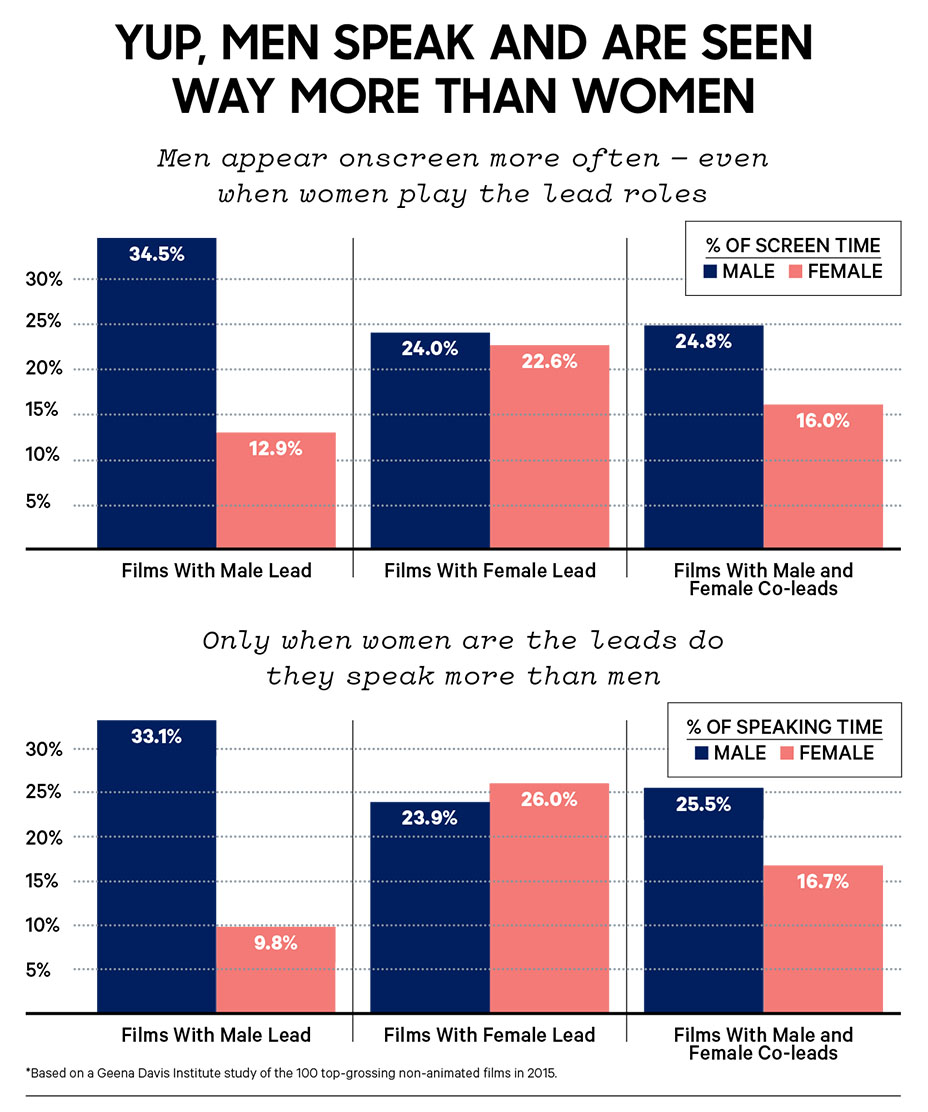 Movies and TV are artistic expressions, meant to entertain; I am not talking about adding a message. I’m asking you to take out the message in so much of children’s media, even for the youngest kids: that women and girls are less important than men and boys because they do less and there are far less of them. It’s creating unconscious gender bias from the beginning that’s nearly impossible to reverse because we don’t even know we have it.

My message always has been that gender inequality in entertainment can be fixed overnight. It doesn’t have to be done in stages or phases. The next movie or TV show you make can be gender-balanced with diverse females as leads, supporting characters and extras. We can easily create worlds where women are half of the characters and do half of the interesting things.

We Hollywood types are often generalized as being very progressive, and the majority of us probably agree with that assessment, but we are profoundly not so when it comes to female characters. Consider this: In the real world, we’re not seeing nearly enough women role models in top professions — not in C-suites, not as law partners, not in Silicon Valley, on boards, or as, um, presidents. But get this: However abysmally few women there are in positions of authority in the world, there are far fewer onscreen — where we get to make it up. We are far from progressive in this regard. We’re not even reflecting the embarrassing reality, let alone fueling girls’ aspirations.

A Closer Look at Female Presidents in Movies, TV

Thanks to a generous grant from Google, my institute has a new tool to use in our research, developed by the USC Viterbi School of Engineering, which allows us previously unheard of accuracy in our analyses, called GD-IQ. We learned that when female characters are present, they are onscreen for less time and speak less than their male counterparts — even as films with female leads made nearly 16 percent more at the box office in 2015 than those led by men. Look at Star Wars: The Force Awakens. Look at Moana.

We simply can’t do this anymore. Let’s not create one more movie or TV show that trains kids to see girls as “less than.” Is your current project balanced? Do the female characters have agency? If it’s not too late, do a gender pass — add female characters or simply cast women in roles written for men. It’s easy, and it works. No more missed opportunities to show that boys and girls share the sandbox equally.

We can create the future now. If they see it, they can be it. We don’t just need the first female president, we need it to be just as likely that our president will be a woman as a man. 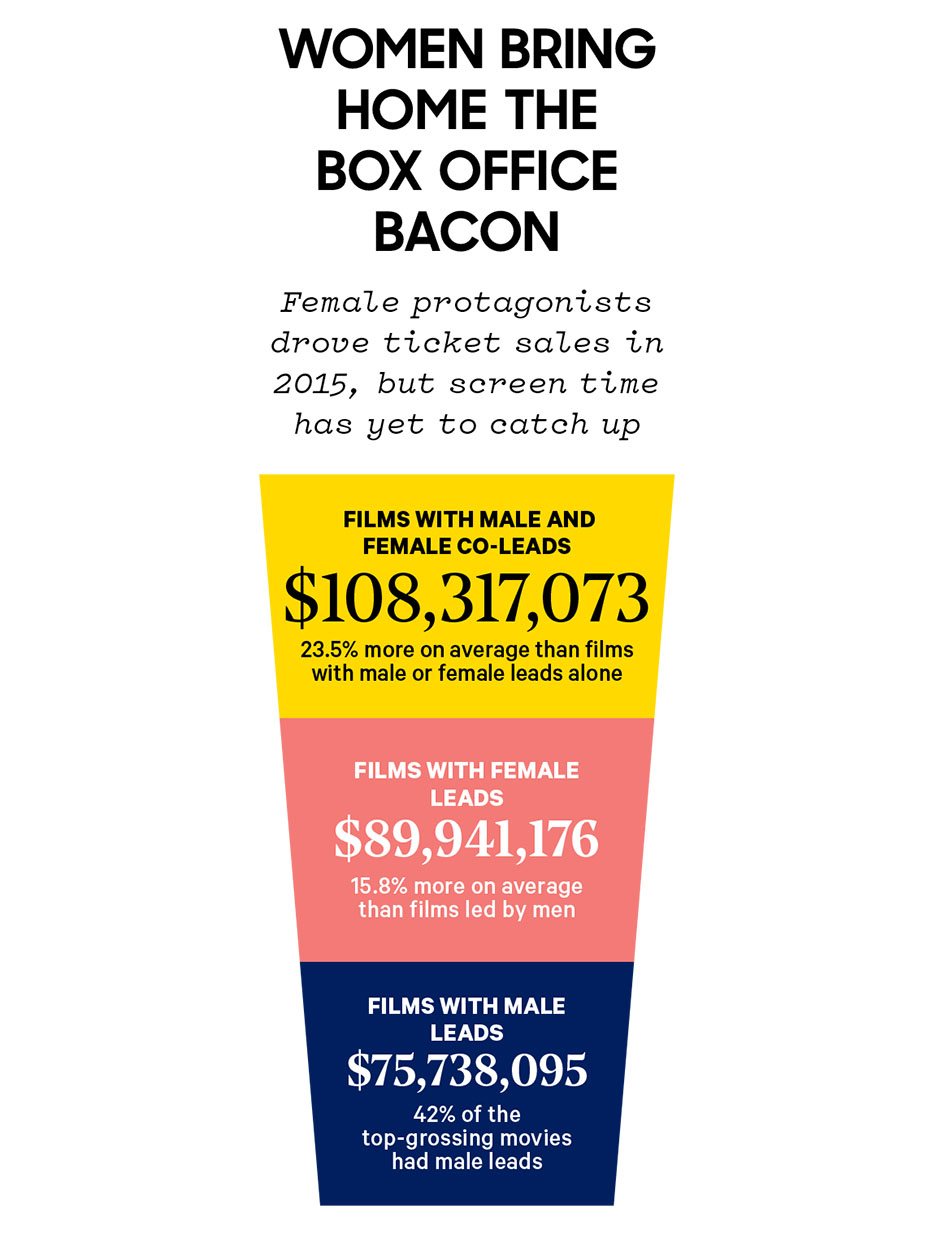