Mark Bradford based his acceptance speech, all two minutes of it, on those two words. His marked the shortest speech of the night during LACMA’s 7th annual Art+Film Gala — the museum’s elegant and always A-list fundraising event that honors an individual from each discipline — and he made use of every second. Plus, after an eloquent introduction from WME-IMG co-CEO Ari Emanuel, a touching and amusing video tribute from pal Anderson Cooper and a hip yet profound Dime Davis-directed tribute reel, Bradford admitted that he didn’t want to overdo his part and screw it all up.

“We always instruct children to share, but it seems like something happens as we get older. We don’t remind each other as much to share, or what we remind each other to share is all of our frustrations,” said the iconic L.A. artist, who then delivered a solution for moving forward. “What I would propose is that, although we’re all grown up now, that we share more than that with each other; that we communicate with more than just our frustrations. When children share, it’s almost instinctive but it’s also instructive. They are also telling us what we can do.”

And just like that, it was over. His speech, not the glamorous Gucci-sponsored evening. There’s much more to share about that.

From the start, it was clear there would be plenty to report on Saturday night with Bradford set to share the stage with the film side of the invite — honoree and fledgling museum founder George Lucas. However, even before one could get past the valet and move toward the check-in table, news presented itself. Protestors lined the sidewalk on the opposite side of 6th Street (a new entrance point this year) shouting “David Geffen make it right, support valet workers’ rights.” According to the L.A. Times, the protest served as a means for UCLA service and hospital workers to show their dissatisfaction over the treatment of valet workers at Ronald Reagan UCLA Medical Center.

The crowd dispersed just before 7 p.m. as guests continued to filter in to the pre-dinner cocktail party. There was news there, too. In previous years, the cocktail party was held in the museum’s main courtyard off Wilshire Boulevard and behind Chris Burden’s “Urban Light” installation. Instead, Saturday night guests were dropped off on 6th and spent more than an hour walking and toasting on the manicured lawn behind the museum among some of the trees from Robert Irwin’s “Primal Palm Garden.”

It was really not so much “walking” as it was standing and peering across the crowd to spot the who’s who of the nearly 600 attendees. “Have you seen Brad Pitt?” asked one veteran and very well-dressed guest. “I heard that Kim and Kris are also here,” said another, referring to daughter Kardashian and mom Jenner. It’s always that kind of night at LACMA’s Art+Film, where stars mingle with the art and charitable elite. Saturday, sponsored in part by Rolls-Royce Motor Cars and Laurent-Perrier bubbly, was particularly star-and-mogul-studded. 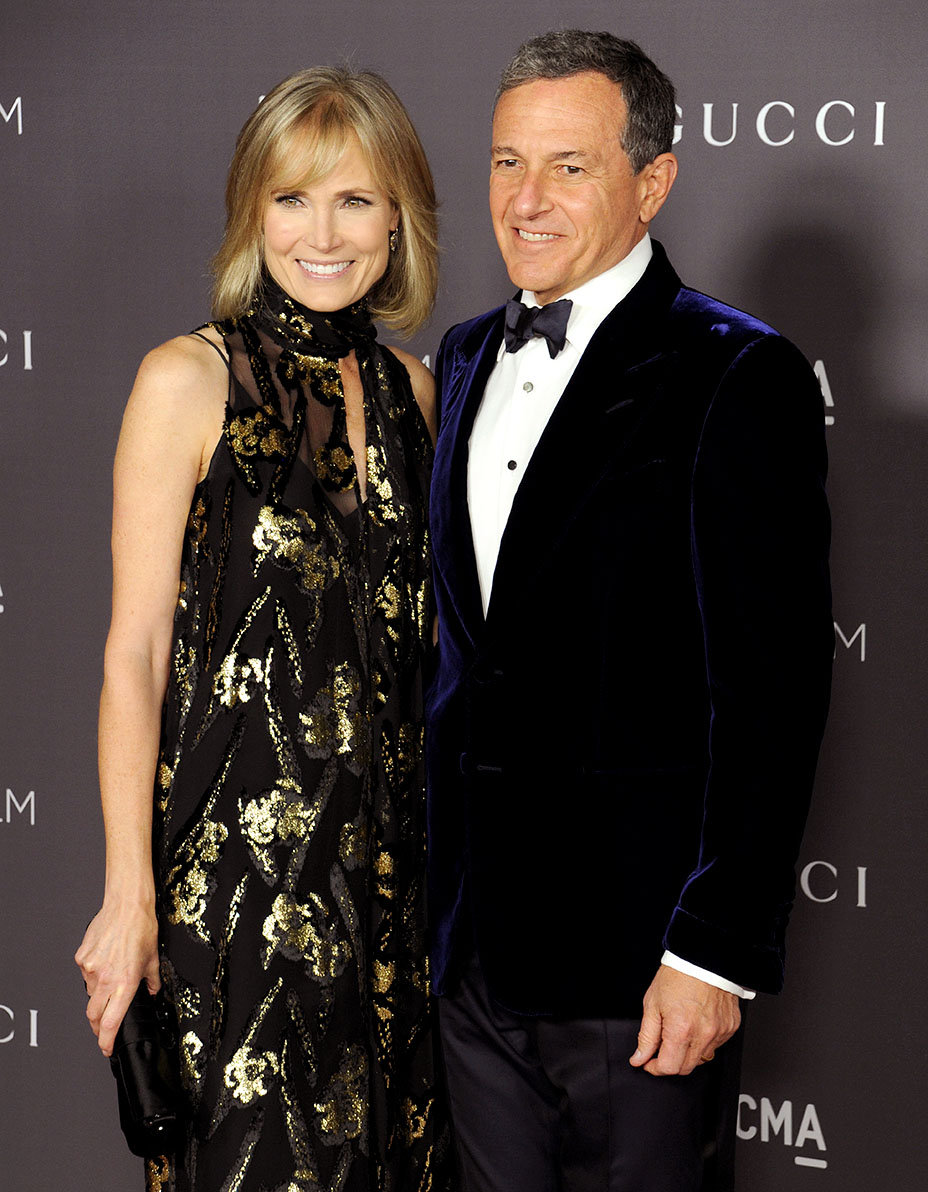 One person who was missing, however, was Gucci guru Alessandro Michele. Per WWD, the creative director was in Italy where he was focusing on a top-secret project. Standing in for him was Gucci CEO Marco Bizzarri, who made the rounds and sat next to Gucci muse Leto. The luxury house still dressed many of the night’s attendees, including Bradford, Govan and wife Katherine Ross, Adams, Rowan Blanchard, Charlotte Casiraghi, Chalamet, Gyllenhaal, Rosie Huntington-Whiteley, Billie Lourd, Pitt, Behati Prinsloo and Dasha Zhukova.

LACMA director Michael Govan opened the program, giving a nod to the many bold-faced names in attendance. He also praised Bradford and Lucas as “artistic visionaries” who have “helped transform Los Angeles into one of the most important creative centers in the world.” The event, which featured a menu by Patina’s Joachim Splichal, also helped transform the museum’s pockets with Govan adding that the event raised a record amount of money with more than $4.4 million. 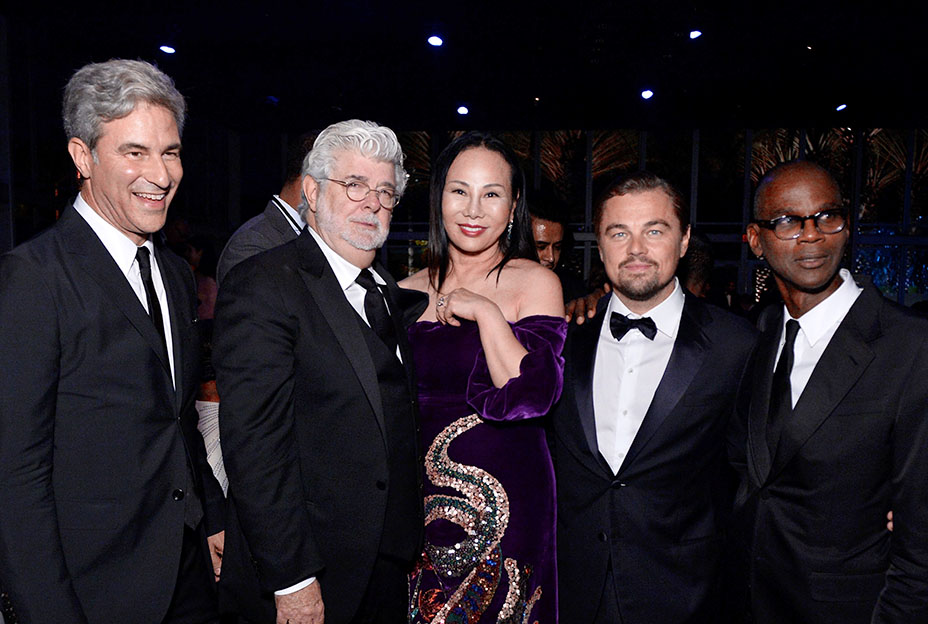 Govan also name-checked Geffen, who was in attendance. (Maybe the protestors saw the RSVPs ahead of time?) His presence — and Govan’s glowing reviews of Geffen’s ongoing contributions to the arts including the upcoming David Geffen Theatre at the Academy Museum next door — was enough to solicit a near standing ovation.

People got out of their seats several other times, for Bradford, Lucas and the night’s other headliner, Annie Lennox, who closed the show with a set of five songs including “Pavement Cracks,” “There Must Be An Angel,” “Here Comes The Rain Again,” “No More I Love You’s,” and “Sweet Dreams (Are Made of This).” The latter closed the show as fireworks set off on the massive rectangular screen that served as the stage’s backdrop. 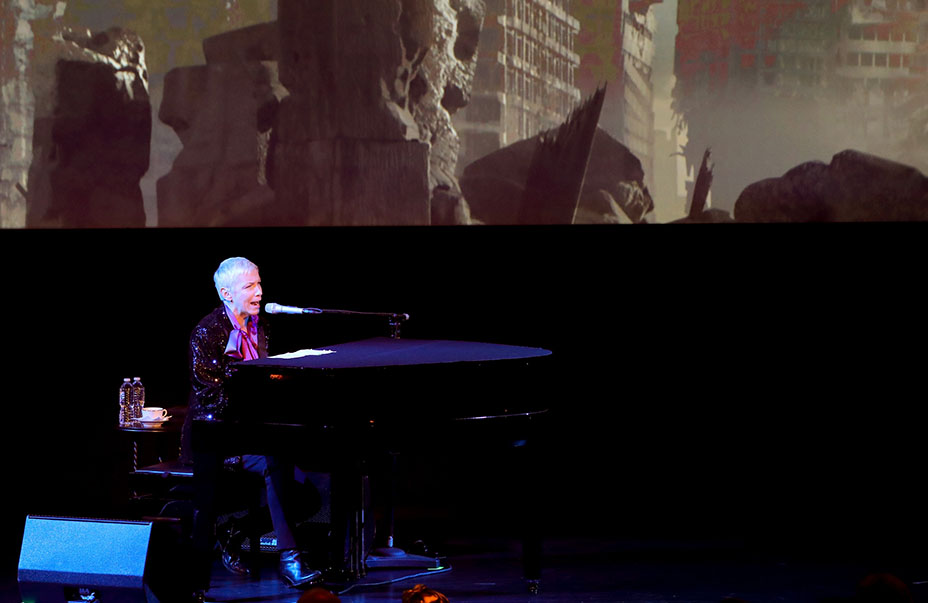 Another applause worthy moment: Govan noted that co-chair Leonardo DiCaprio and his foundation are responsible for a restoration project that will see “Urban Light” refitted with LED bulbs, reducing power by 90 percent. It is scheduled to be completed in February, Govan noted, in time for the 10th anniversary of the assembled sculpture (and Instagram hotspot).

After Govan and brief remarks by DiCaprio’s co-chair Eva Chow came Emanuel. The uber agent recounted meeting Bradford for the first time and becoming an instant fan. “Mark’s work hits you immediately with what one art critic called “rough hard-fought elegance.” As someone who has been known to play a little rough and fight a little hard, I feel for mark’s work right away,” Emanuel said. He then offered details of their friendship, explaining that they talk and text every week about everything from their personal lives to projects. “When the Venice Biennale was coming up, we traded notes and itineraries. When family members got sick we called each other to check in. When he was going to Chicago, I told him that if he ran into an extremely foul-mouthed mayor [Emanuel’s brother, Rahm Emanuel], I told him that I’d never met the guy. Mark is a great artist, you all know that, but he’s also a very sweet man and a good man.”

He’s also tall, at 6’8,’’ but that’s obvious. A lesser known fact came from Cooper during his surprise video tribute when the CNN newsman told the crowd that Bradford sends pretty great text messages containing some “motherly advice” like this: “Honey, you don’t want to be on a dance floor when the lights come up.” Cooper’s response? “I wish I had followed (that), because you are right. It is not pretty. I hope you are able to take in tonight, and don’t try to sneak out early like I know you want to. You deserve it all.”

Bradford has been taking his own advice to “please share.” In conjunction with LACMA’s gala, he created a new piece, “150 Portrait Tone,” currently on view in LACMA’s Resnick Pavilion. It is inspired by the 2016 police shooting of Philando Castile. Up next: Bradford will see his latest exhibition, “Pickett’s Charge,” open on Nov. 8 at the Hirshhorn Museum in Washington D.C. According to that museum, it will be one of his largest works to date, spanning 400 linear feet.

Kerry Washington took the assignment for introducing her friend, the legendary filmmaker Lucas. She joked that she wasn’t sure if her father loved Star Wars or his daughter more. So imagine her delight at being able to introduce her father to the man who married one of her best girlfriends, Mellody Hobson. Knowing him has been pretty cool for her, too. “Since meeting George myself, he has become more than just a hero, more than an icon. He is a friend, an adviser, a generous sage, a compassionate teacher, an example in so many spheres of life of who I want to be,” said Washington, wearing Gucci like so many of the A-list guests. “His life, not just his films, are a testament to his artistry. He gives and he gives and he gives in the way that the artists are called to do.” 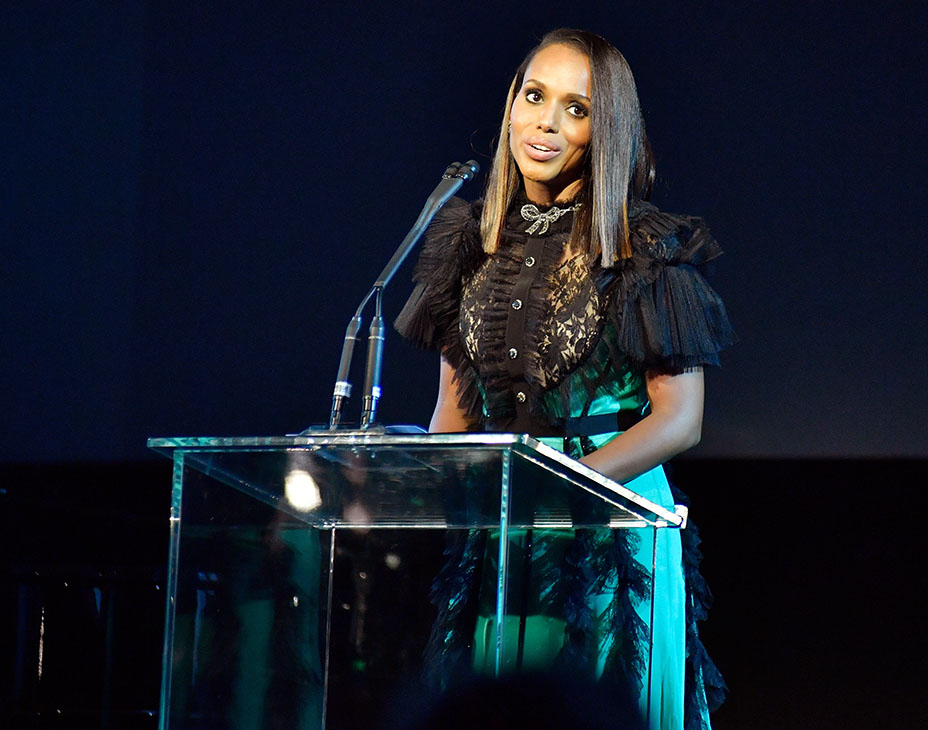 For his part, Lucas spent the bulk of his acceptance speech sharing why he has been called to form his own museum, The Lucas Museum of Narrative Art. And it wasn’t all positive. He noted the many rejections after having been turned down by cities including San Francisco and Chicago before landing in L.A. “I have discovered in trying to build a museum — I’ve been working on it for 10 years and been rejected by many cities — that a lot of people don’t like museums. They don’t really think of them as anything valuable. I was shocked beyond belief.”

Less shocking is that he didn’t give up, and he said it was because of the kids. “Art is important to our society and our culture. It is a window into a much larger world. That’s one of the reasons I’m doing it,” said Lucas of the museum, set to open in 2021 in Exposition Park near USC. “It was originally designed to inspire young people. To inspire people who live in an apartment where all they can see is a dreary street, maybe a burned-down car, they know where all the drug dealers are, they go to school, sorta half a school and they think that is the world. It’s not. The secret to get out of that, I’ve learned, with Star Wars and it actually works, if you give kids an inspiration and you say use your imagination, there’s no limits. You can imagine anything you want.”

Lucas got the loudest applause when he said that “all art is popular art.” He followed it up by sharing one last piece of wisdom about life that he’s learned, and it is that true artists, like the ones he rose through the ranks alongside follow their passions not for money or ego. 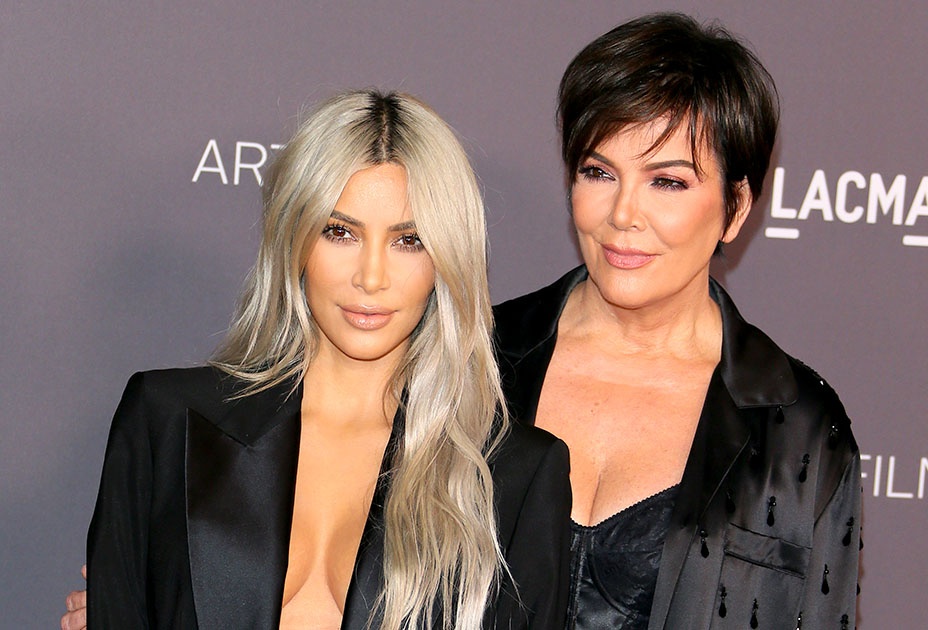 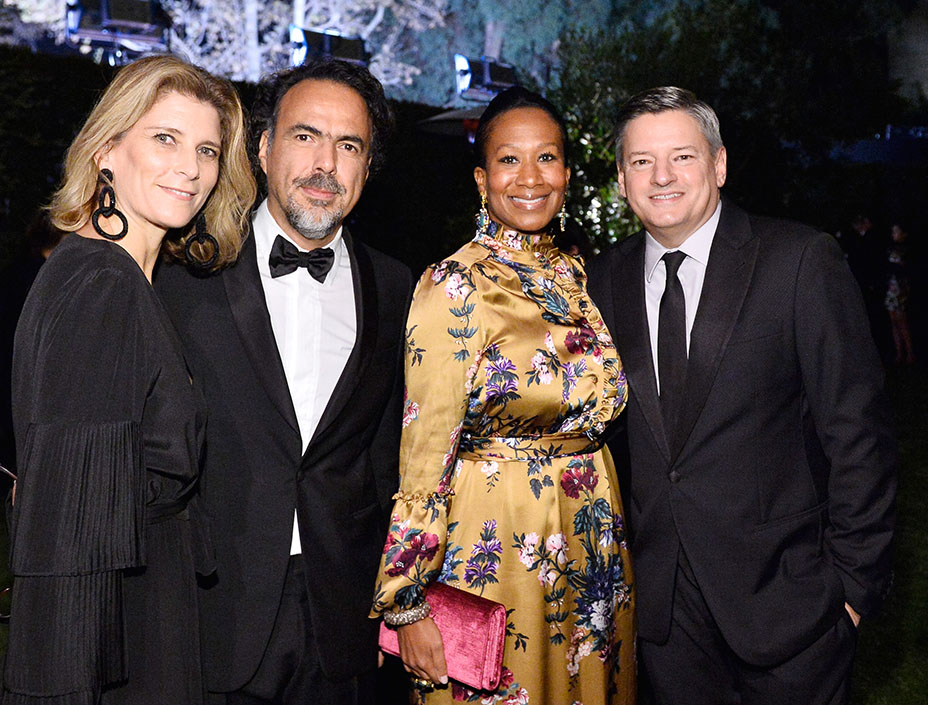 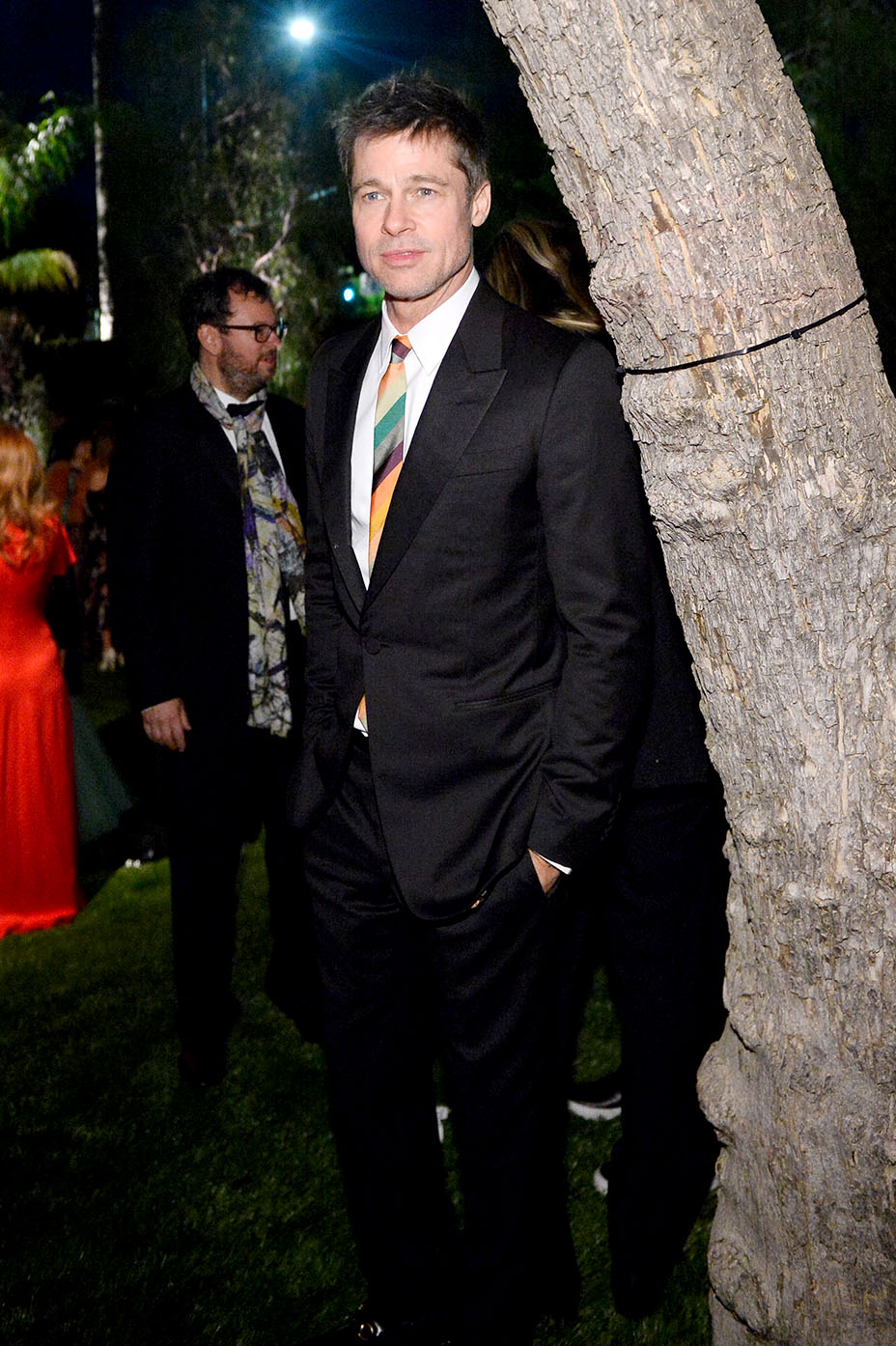