To learn more about the title, which chronicles the transformation of a traditional samurai warrior into a ghost fighter capable of defeating the Mongol empire with unconventional tactics, The Hollywood Reporter spoke with Jason Connell, art director and creative director for Ghost of Tsushima developer Sucker Punch, who spoke about the island setting that will guide players to thematic story points and the way that fear is emphasized and used in combat.

As he set out to create a “massive open world,” Connell and the creative team visited mainland Japan and Tsushima and were inspired by the overarching beauty of the locations they set foot in. “Whether it was old remnants of a castle that was overgrown with beautiful ivy or a giant pampas field — these things were very evocative to us and we wanted to faithfully create that feeling for people,” Connell tells THR.

Along the way, they drew upon the films of Japanese director Akira Kurosawa, who as Connell describes, includes a sense of motion and movement in every frame. “We created an art direction goal very early on that everything must move,” says Connell, giving the example of capes, bushes, grass, flowers and flags as elements that would move in the wind. “That’s quite a bit of a hurdle technically, but I’m glad it was one of our original goals because eventually it turned into something far greater — the way we actually let [players] move through the island,” he explains. “It’s almost like an arrow pointing you in a certain direction.”

The story of Jin, the young samurai at the center of the game, also fuels the decision to involve such movement. “This is [his] home, and in the story he is protecting his home at all costs,” says Connell. “By having those visual elements be more than just visual elements — they’re helpful as well — hopefully [players] care about his home.”

As Jin sets forth on his path from a samurai to a ghost, the character becomes quite feared, and the sense of fear itself is even used in combat to the player’s advantage, Connell explains. “In the trailer, we show [Jin] as a young boy being taught a lesson by someone who appears to be a samurai peer — this is his life, he’s always had this certain way of living,” he says. “When the invasion happens in the story and his world is turned upside down, he’s put into a situation where that doesn’t work anymore and he begins doing things that are a little bit unorthodox for the time or certainly against some of his teachings.” From there, the people around Jin start to behave differently, along with the protagonist.

“He has people reflecting this to him; friends and family who support him in doing what he has to do to save the island, even if it is a little messy, and then other people who live and die by the samurai code: death before dishonor,” continues Connell. “Both of these groups are weighing on him. But as he’s progressing into becoming the ghost, what he’s really becoming is a legendary warrior. People talk good about him, people talk bad about him, he’s becoming bigger than he would have ever imagined.” As Jin hunts enemies, some of them are frightening, and some are actually frightened.

Connell gives an example from the demo, where in the ghost section, Jin obliterates four or five people quickly with a smoke bomb and kunai — or throwing — knives, and then a guy falls. “He’s trying to get away from him, and that is a sense of fear,” says Connell. “Fear can be used to the player’s advantage in the sense that you’ve done something so scary that it literally took one of them off the playing field.” 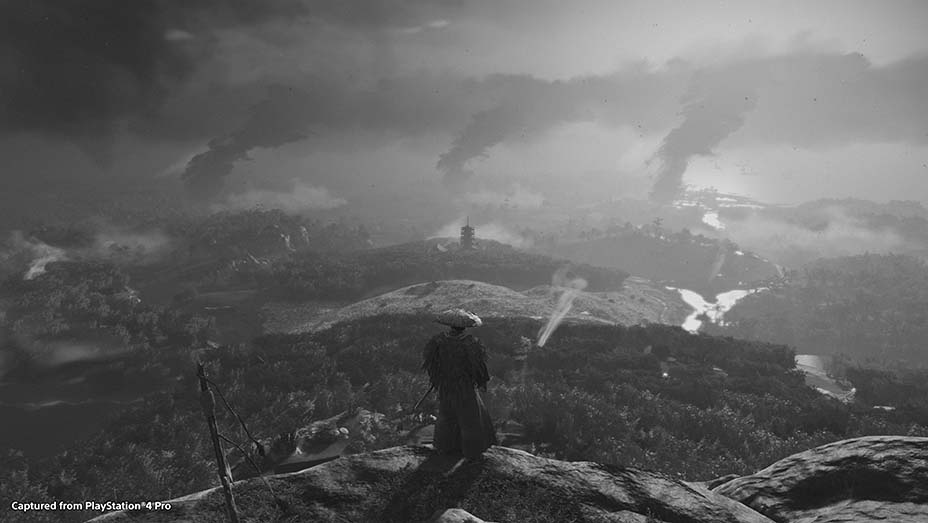 Fear is also represented in Jin’s physical transformation. He starts by wearing the traditional armor of a samurai and adopts a dark, sleek appearance when he becomes the ghost. “His style and the visuals become a little bit more unorthodox,” explains Connell, referencing the latter part of Jin’s journey. “He puts on the mask, and that’s the ultimate icon of the thing that people fear.”

In order to ensure accuracy in the cultural references throughout the game, the developers employed architectural historians to consult on religious structures from the time period and distinguish between the prayers that occur at different types of shrines. Sucker Punch also worked closely with Japan Studio, which captured foliage audio from the countryside, among its numerous contributions.

“All games are minor miracles that they even come out,” says Connell. “The way it looks and feels when you’re in the world is pretty surreal.”

The art director, whose favorite video game IP is the Legend of Zelda franchise, has been playing since childhood when his grandmother bought him his first Nintendo console. He cites Secret of Mana as one of his favorite titles from his formative years, when he also played many games on an Atari 2600 that his father gave him.

Connell says he is driven to create games by the opportunity to offer players something new, “something they haven’t necessarily experienced before.” In the case of Ghost of Tsushima, which comes out July 17 for PlayStation 4, Connell says the appeal was a game that lets players explore feudal Japan with such freedom: “Creating a cool place for people to escape that feels real — it’s not just the art, it’s not just the design, it’s the collection of every piece that comes together to create a good experience.”