Continue to The Hollywood Reporter SKIP AD
You will be redirected back to your article in seconds
Skip to main content
November 17, 2016 5:19pm

Pour yourself a hot cup of coffee because Lorelai and Rory Gilmore are returning to Stars Hollow.

Ten years after Gilmore Girls signed off, Lauren Graham and Alexis Bledel return for their famous mother-daughter roles for the Netflix revival Gilmore Girls: A Year in the Life, set to premiere Nov. 25. Of course, a lot changes in a decade — including their sense of style. And no one understands that better than Brenda Maben, the original show’s costume designer, who came back to work on the project after getting an email from series creator Amy Sherman-Palladino.

“She said, ‘You need to be in the States by the end of the year,'” Maben told The Hollywood Reporter, explaining that Sherman-Palladino knows that she tends to travel a lot. “I said, ‘OK.’ Then I got a text from a lot of my friends, saying, ‘Did you know Gilmore Girls was coming back?’ And I was like, ‘Wow, it is?’ That’s when I knew. I was pleasantly surprised.”

Ahead of the show’s return next week, we chatted with Maben about dressing Lorelai and Rory again (in more designer names, this time!) and the person whose wardrobe changed the most.

It was great. It was as if I had never left. The actors and Amy were just as excited to be back. Everyone shared the same excitement and enthusiasm. It was one big family reunion. It was just happiness.

Based on the trailer, Lorelai and Rory seem to have a more sophisticated style. How did you approach their look for the revival?

Rory has been traveling the world and writing and spending a lot of time in Europe — that’s reflected in her clothing. For Rory, I used a little bit of Burberry and Nanette Lepore, and Tory Burch shoes. Most importantly, she has a power bag that is blue, which is one of Rory’s favorite colors. It was manufactured by Jamah, a Los Angeles-based luxury handbag line. I used that bag specifically because she’s coming from Europe and the first time you see her, I think it’s important that she had something that says, “I’m going for it. I’m going to be successful in what I’m doing.” I thought that bag just summed that up.

For Lorelai, she has on black jeans because she’s more successful, so she doesn’t really need to wear blue jeans. She’s coming from somewhere else. She had on a Diane von Furstenberg blouse and the name of the blouse was Lorelei, which I thought was kind of great. And she has on a pink Guess coat. In the original series, she had a pink coat that was pretty famous. I just thought it was kind of fitting that it ties in with the previous episodes so that fans could get a first look and feel like there she is. She’s still Lorelai.

There are certain costume moments from the original series that stand out, like Rory’s polka dot dress from the dance marathon episode. What other clothing elements did you bring back?

In the trailer, Rory’s sitting at the kitchen table with her mom and she’s just in a t-shirt. I think that’s a little hint of how she is when she gets home. You know how you are when you get home — you’re in a familiar place, so you sort of shed what you’ve been like out in the world.

I also noticed some jewelry on Lorelai in the trailer. How did decide on the accessories?

She never was a huge jewelry person. In the beginning she always had her diamond earrings, which were sort of leftovers from her being at her mom’s when she was a teenager before she had Rory. Just very simple. There’s a necklace with her daughter’s initials and a brass cuff with a lapis stone on it.

All three boyfriends — Dean, Jess, Logan — appear in the trailer. How did you keep their style similar or different from the original series?

Dean [Jared Padalecki] is a little different — he’s more mature in his look. His outerwear is a better brand, more classic. You know when you’re a teenager and you have a certain style, but you can’t afford what you want until you’re an adult with a job and then you’re able to buy that one piece that is going to take you from your 20s to your 40s. He’s making money now, but he’s not a millionaire.

For Jess [Milo Ventimiglia], we didn’t want to use the leather jacket anymore because his character has changed somewhat.

Logan [Matt Czuchry] is basically the same, but now his suits are all custom-made because he’s a business man.

Out of everyone that you had to dress, whose wardrobe changed the most?

Emily Gilmore [Kelly Bishop]. The baseball shirt is a slight hint. I was a little surprised when they included that in the trailer because I thought it would be a nice surprise that maybe the fans wouldn’t be expecting because she’s always been a certain way. When I saw that I was like, “Oh, I guess we’ll be talking about that.” (Laughs.) We had the t-shirt made and then we had it printed with the word, “Candie’s.” 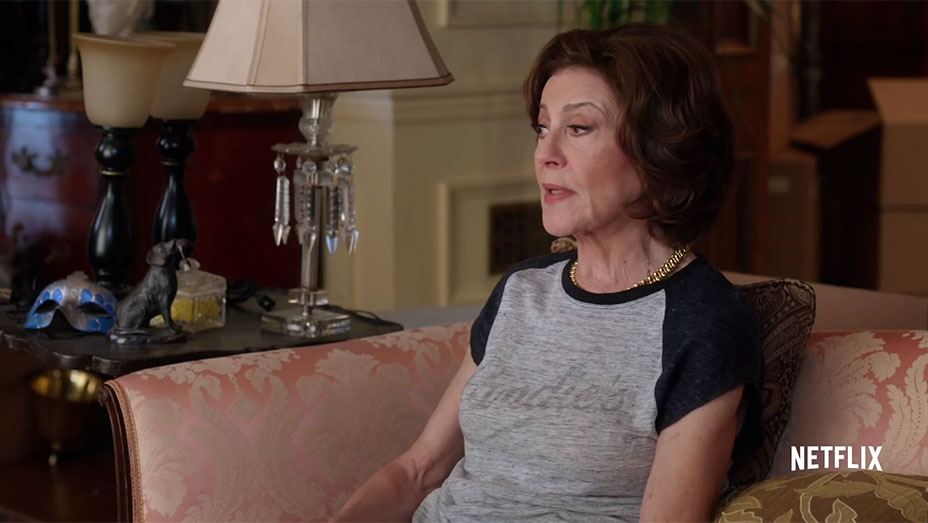 Gilmore Girls: A Year in the Life is set to premiere Friday, Nov. 25, on Netflix.