Gina Gershon has been sharing views of her summer in San Sebastian on Instagram for weeks now, posting pictures of the cast, crew and locations on Woody Allen’s next film, Rifkin’s Festival. But it was the image she posted two days ago — a black-and-white selfie of the actress smiling widely while touching heads with a bucket-hat-wearing Allen — that caused her comments to light up with fiery protests.

“Best Summer Camp ever,” Gershon wrote, tagging the experience a dream gig. “Thanks to Woody for including me, and for years and years of making some of my favorite moments ever. it’s been so much fun.”

By Tuesday afternoon, the post elicited close to 200 comments from her more than 326,000 followers, and Gershon was paying close attention to what they were writing. “Hmmmm. Wish I could like this … but nope,” typed a woman named Kristen. “He’s a sexual predator and people forgiving him [because] he is a filmmaker is twisted.”

Gershon replied directly to Kristen’s criticism by defending her choice to star in the film alongside Louis Garrel, Christoph Waltz, Elena Anaya, Wallace Shawn, Damian Chapa and Sergi Lopez: “I don’t believe that to be true. You should really do all of the research and read all of the articles before believing that. It’s really important to make up your own mind and not go by what the masses claim. I’ve done extensive research and I can say with very clear conscience that I’m so happy to be working with him. This man is not a sexual predator!”

Best Summer Camp ever. Thanks to Woody for including me , and for years and years of making some of my favorite movies ever. Its been so much fun. #wasp2019 #sansebastian #woodyallen #dreamgig

Allen, 83, was accused by his adopted daughter Dylan Farrow of molesting her when she was 7 years old. She is now 34, and has spoken up in recent years about the alleged crime, which has divided the family Allen shared with onetime wife Mia Farrow. It has also derailed his career in the wake of Hollywood’s #MeToo movement. “This is tough because of his daughter and all she has said,” wrote one user in reference to Dylan’s claims, to which Gershon replied, “Read what the other son and daughter said then make up your own mind.”

The actress is referencing the 2018 essay published by Allen and Farrow’s son, Moses Farrow, in which he defends his father and condemns his mother for allegedly forcing the lie upon Dylan. “Given the incredibly inaccurate and misleading attacks on my father, Woody Allen, I feel that I can no longer stay silent as he continues to be condemned for a crime he did not commit,” Moses wrote in the piece.

Another, Ronan Farrow, a leading writer covering the #MeToo movement — he won a Pulitzer Prize for his work in The New Yorker, which he shared with The New York Times reporters Megan Twohey and Jodi Kantor — has long stood behind his sister.

The complications of the story are reflected in Gershon’s space on Instagram. Not all of her followers protested the project or the photo. “Thank you so much for your shiny present! And the charming and hilarious report of your shooting and tour days here in [San Sebastian].” Another follower wrote, “I really love his films and always look forward to the new ones.”

Posted yet another: “It’s one thing doing the movie and keeping it on the down low, but the fact that you’re ignoring the blatant truth and openly supporting him is a disgrace. You’ve let down so many of your fans.”

Rifkin’s Festival, a romantic comedy, centers on a married American couple who go to the San Sebastian Film Festival and get caught up in the magic of the event and the beauty and charm of Spain. The woman has an affair with a French movie director, while her husband falls in love with a beautiful Spanish woman. The pic is being co-produced by Spain’s MediaPro Studio, along with Allen’s Gravier Productions.

This is not the first time Gershon has responded to the controversy surrounding Allen and his work in a post-#MeToo world. At a press conference in July ahead of filming, the actress joined her castmembers and Allen in the coastal city to announce the project and respond to reporters’ inquiries.

“I personally think that you really have to look at every single situation and really, between you and you, decide how you feel about this situation. And I can say with a very clear conscience and so much excitement that I am so thrilled to be here. This feels kind of like a dream come true,” said Gershon, who also posted an image of Allen’s wife, Soon-Yi Previn, during her time filming in Spain. “While I think there’s a lot of good that’s coming out of all these different movements, I just feel it’s really important that people really take a look at every situation and really make up their own minds about it.” 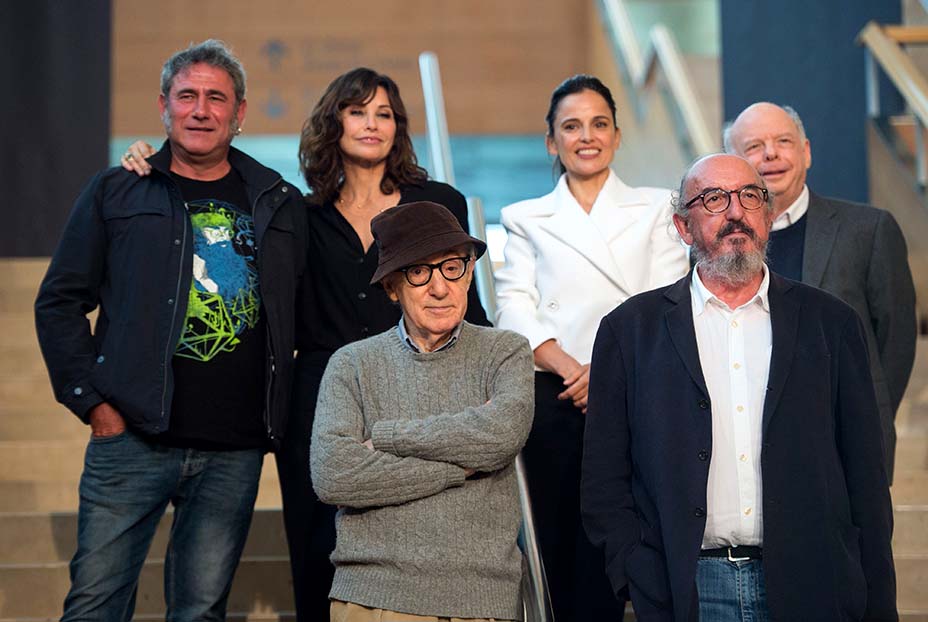