No disrespect to Bob Dylan, one of the greatest songwriters in modern American music, but hearing his tunes sung by the melodious voices in Girl From the North Country is a revelation — the second time even more than the first. Moving to Broadway after a hit 2018 run at the Public Theater, this brilliantly conceived project from Irish writer-director Conor McPherson could be called the anti-jukebox musical. Rather than being forcibly wedged into the narrative, the songs are used with imagination and a sweeping amplitude of feeling to deepen the mood, enrich the characters and liberate their inner voices. The result is a rapturous act of theatrical storytelling.

Unlike, say, Jagged Little Pill, to name another alt-musical that arrived on Broadway this season, North Country doesn’t clobber you over the head with its overstuffed bag of angst — despite being set in a rundown flophouse threatened with foreclosure in Duluth, Minnesota, in winter 1934, when the brooding storm clouds of the Great Depression remain thick in the air. Instead it conjures an enveloping sense of melancholy you want to linger in and savor.

There are flavorful literary shades of Steinbeck here and also O’Neill and Wilder, and although McPherson paints them as archetypes, every person on the stage remains full-blooded and vital, never veering into cliché. That seems even more true now with a cast dominated by holdovers from the downtown run, who have nestled into their roles with bone-deep ownership, setting the standard for a handful of terrific new additions. 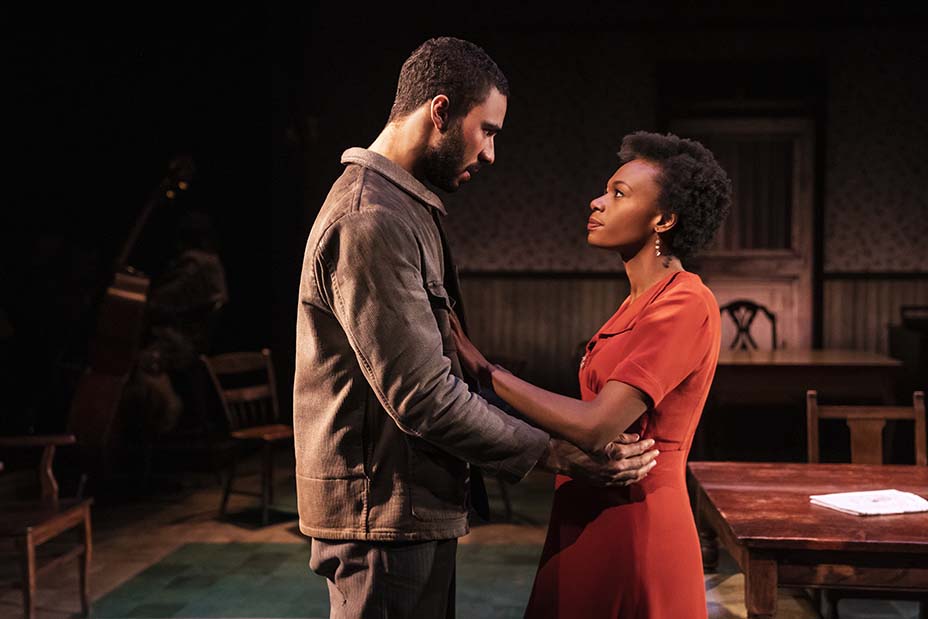 Notable among the latter is Austin Scott, coming off a stint in the title role of Hamilton and revealing a soulful presence and a voice both sweet and forceful as Joe Scott, the prize-fighter allegedly just released from prison on an overturned conviction. When he barrels into “Hurricane,” perhaps the most literally used song choice of the 22 tracks sampled here, spanning from 1963 to 2012, the performance is electrifying.

But no less invaluable is the new blood that comes from Public Theater stalwart Jay O. Sanders in the linchpin role of Nick Laine, whose mismanagement has reduced the family business he inherited to a boarding house barely scraping by. A man full of bitterness for his part in a childhood tragedy, he claims to be unable to love. But he cares in his gruff way for his neurologically impaired wife Elizabeth (Mare Winningham), even while carrying on an affair right under her nose with Mrs. Neilsen (Jeannette Bayardelle), an attractive widow waiting on the probate settlement of her late husband’s will.

The other residents include Nick and Elizabeth’s 20-year-old son Gene (Colton Ryan), an aspiring writer and budding alcoholic whose rancor is driving away his sweetheart Kate (Caitlin Houlahan); and Marianne (Kimber Elayne Sprawl), raised by the Laines since being left behind by guests as a foundling child 19 years earlier. An African American exposed to virulent racism from a young age, Marianne is now pregnant and refuses to name the father, prompting Nick to try to marry her off to crotchety shoe repairman Mr. Perry (Tom Nelis). 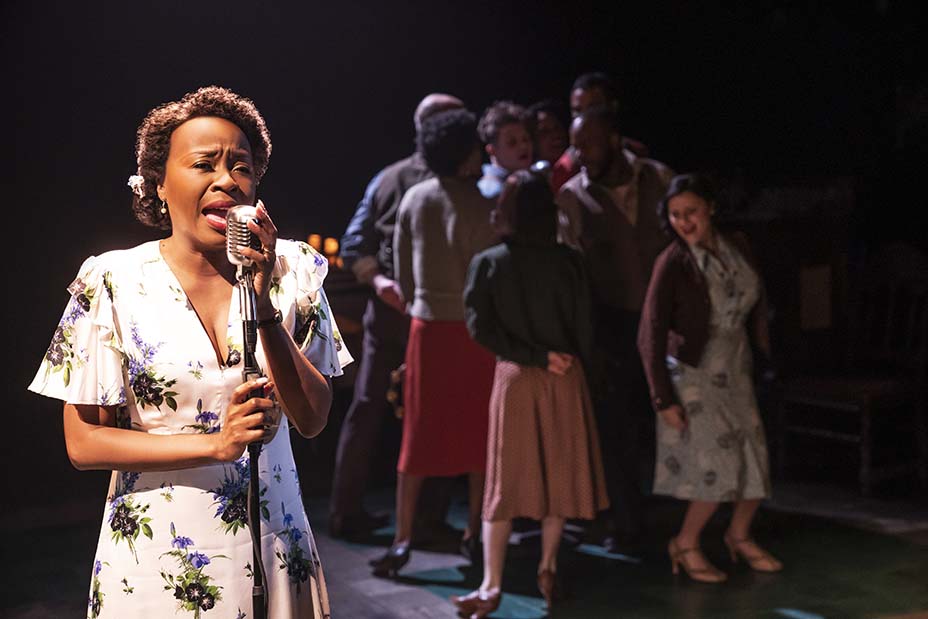 The local medic, Dr. Walker (Robert Joy), functions rather like the Stage Manager in Our Town, providing evocative linking narration at a period radio microphone. McPherson stages the play as a broadcast of the drama, with the actors frequently gathering around mics to sing harmonies or taking a seat at the piano or drums to play accompaniment. But that “performance” bleeds in and out of reality on stage, and reality often veers into dream as feelings the characters are unable to express are released in song.

Those fluid shifts in the narrative dimensions are beautifully navigated in McPherson’s direction and deftly echoed in Mark Henderson’s poetic lighting and designer Rae Smith’s sets. At times the boarding house interior is represented in timeworn detail, elsewhere it fades into transparent walls, and in emotionally soaring moments, backdrop images open out of Great Lakes region landscapes — lonely roads or vast, snow-banked bodies of water, suggesting a beckoning world beyond that appears and vanishes.

Among the lodgers are Franklin W.H. Burke II (Marc Kudisch), his wife Laura (Luba Mason) and their son Elias (Todd Almond), a rangy adult with the mind of a child, and no sense of his own strength. Frank, as his father likes to be called, is a conservative blowhard, a former factory owner who has brought his family south under shadowy circumstances. Threatening to expose his past is Reverend Marlowe (Matt McGrath, another strong newcomer to the cast), an unscrupulous bible salesman who arrives late one night with the boxer, Joe, looking for any chance to make a buck. 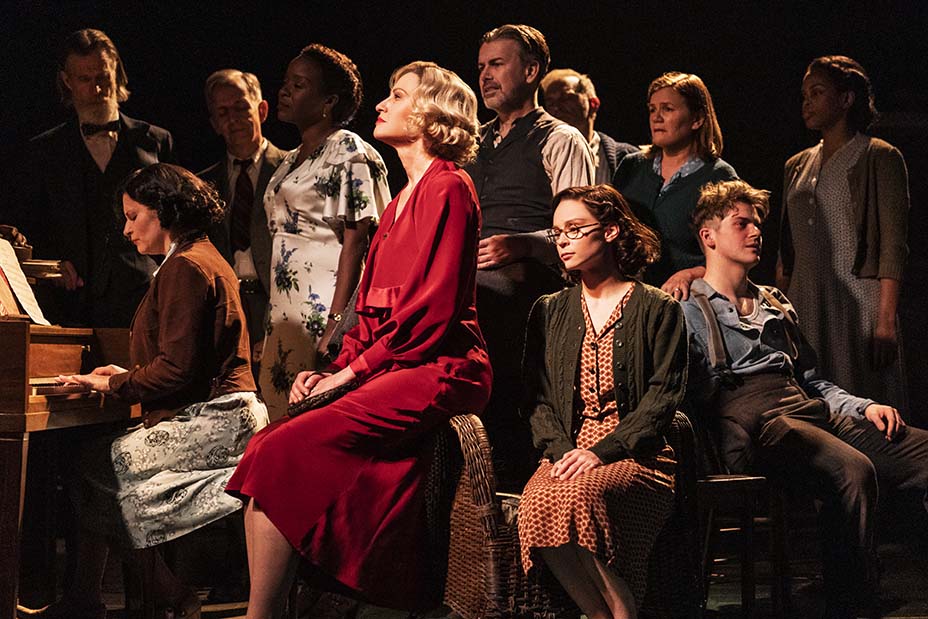 Considering the familiar Americana cloth from which these characters are cut, what’s remarkable about McPherson’s writing is the fine-grained textures woven into the drama. While it’s set in Dylan’s hometown six-and-a-half years before he was born, this is a period piece that resonates today with its depiction of poverty, hardship, anxiety and trauma. The lonely prairie here is a figurative state of mind in an America of broken dreams. It’s a story of heartache, longing, resignation, anger, tragedy and sorrowful endurance, also laced with spiritual and religious elements, as hinted in the instant attraction between Marianne and Joe, and the biblical destiny wound into their names.

Perhaps the biggest potential pitfall of prosaic familiarity is the stock character of the truth-telling crazy woman, and yet in Winningham’s ineffably fine performance, Elizabeth is an illuminating presence, perhaps the most powerful figure on the stage. She can seem broken and pathetic, but there’s steel and no-bullshit judgment beneath her girlish vulnerability, whether her clear-eyed gaze is trained on her weak husband, on a hypocrite like Marlowe or a self-serving old fool like Perry. She leads two of the best-known songs in the show, “Like a Rolling Stone” and “Forever Young,” with exhilarating passion, skittering off in playful dance breaks while rattling a tambourine.

Winningham also gets McPherson’s most haunting monologue, recounting her history with Nick — the process by which a love story becomes irrevocably tarnished, the demands of marriage become a burden and madness becomes a necessary escape — as a third-person narrative delivered with almost sardonic detachment. 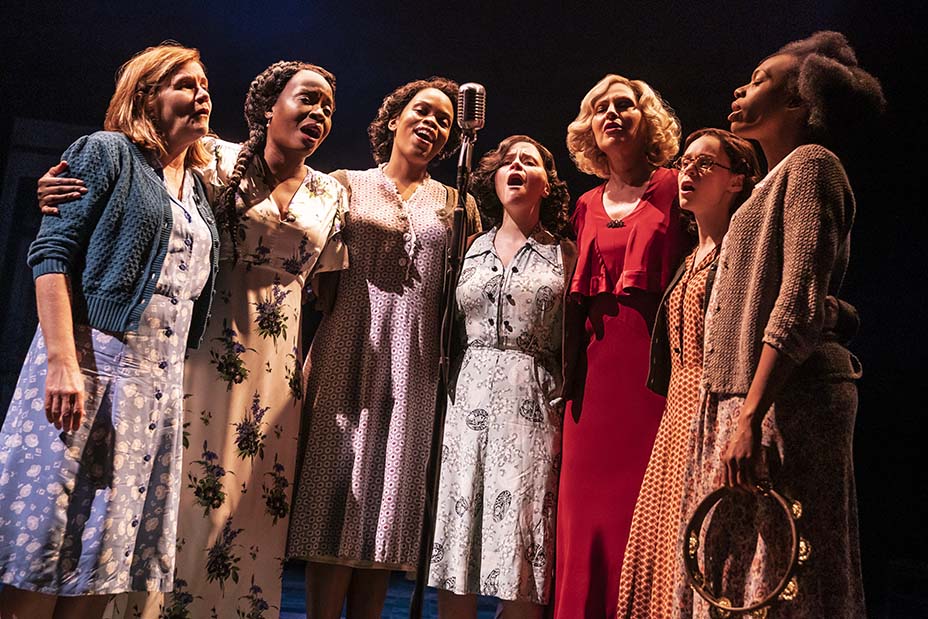 For such a large-scale ensemble piece it’s extraordinary that every character is so vividly etched — and all of them played with naturalistic brushstrokes; there’s none of the usual artificially big “musical-theater acting.” But it’s the women in particular who are wonderful, leaving indelible impressions. That makes their choral numbers especially stirring, like “Jokerman” with its cryptic trickster lyrics, or the embittered “License to Kill,” beguilingly mashed up with Joe’s “Slow Train.”

Bayardelle not only uses her powerhouse voice to tremendous emotional effect on songs like “Went to See the Gypsy,” “True Love Tends to Forget” and “Pressing On,” her Mrs. Neilsen shreds the stereotype of the “other woman” with grace, poise and humor. She may wield some champion side-eye, but there’s a warm, nurturing quality to her, evident when she’s tending to Elizabeth, that draws you in and makes you feel her pain as her hopes crumble.

The willowy Mason’s Laura moves like a floppy Olive Oyl, especially once she starts hitting the medicinal drops supplied by Doc Walker. She can be hilariously jaded, but that cynicism cuts deep, manifesting as impatience and frequent disgust with her husband. When she straddles the drum kit and launches into a boozy take on “Sweetheart Like You,” she seems to be asking how an elegant woman like herself ended up in such a dump. Lapsing into scratchy, Dylan-esque talk-singing in parts of the number is an inspired touch. And there’s wrenching sadness when Laura and Frank follow a devastating loss with “Is Your Love in Vain?” Mason makes the lines “Do you love me? / Or are you just extending goodwill?” perhaps the most shattering words in the show. 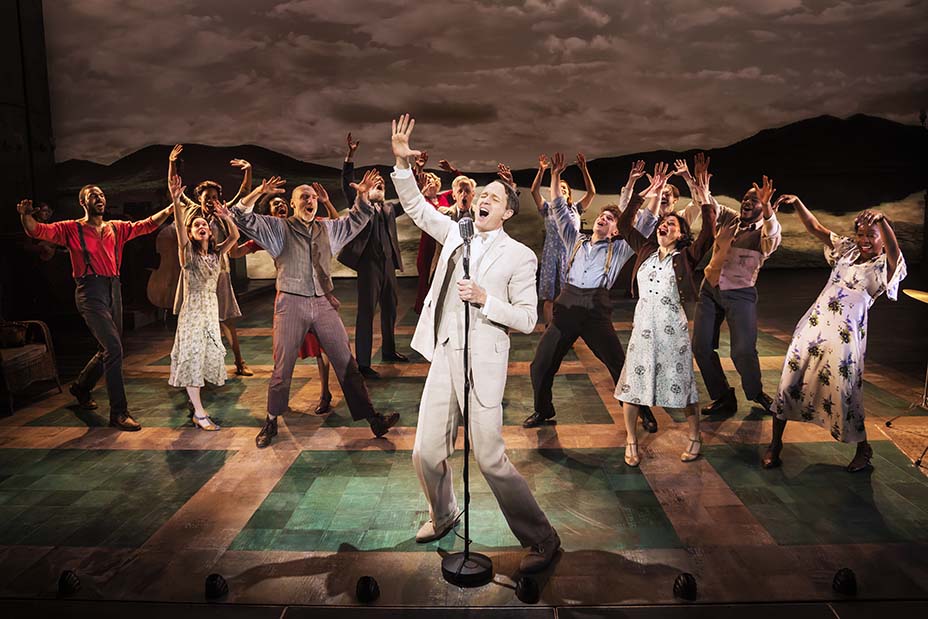 Sprawl, who already was a transfixing presence in the downtown run, has found even greater nuance in Marianne. Along with Gene and Kate singing the plaintive “I Want You,” which is slowed down into an aching ballad, Marianne’s “Tight Connection to My Heart” packs piercing expression of romantic yearning into the early scenes as she sings the refrain, “Has anybody seen my love?” But there’s toughness and intelligent self-possession in the character, too, in her brisk handling of Mr. Perry and the initial caution with which she responds to Joe’s advances in “Idiot Wind.”

There are too many outstanding musical moments to mention, though Almond’s roof-raising “Duquesne Whistle” is uplifting in every sense, and Elias’ occasional bursts of classic Dylan harmonica throughout the show are an invigorating link to the original artist’s work.

The contribution of Simon Hale’s ravishing orchestrations and arrangements cannot be overstated — the harmonies alone are glorious. He completely reinvents familiar songs to make you feel you’re hearing them for the first time, finding cohesion in a protean range of styles that encompasses folk, gospel, rock, blues and country, and embroiders the drama with gorgeous underscoring lifted both from the Dylan catalog and from period tunes. Simon Baker’s crystalline sound design maximizes the impact.

It feels simplistic to call Girl From the North Country a musical since it’s such a unique and unconventional project, yet no show on a New York stage since Fun Home has so inextricably integrated music and drama. As the songbooks of popular artists more frequently become fodder on Broadway for narrative patchworks, McPherson’s artistry, his evident connection to Dylan’s work and his grasp of the songs’ slippery storytelling power give you fresh hope for the genre.