Girls Trip, the raunchy, laugh-out-loud comedy directed by Malcolm D. Lee, earned positive reviews and $30.4 million at the box office on its opening weekend. Not too shabby.

Of course, a celebration of sisterhood about four lifelong girlfriends who travel to New Orleans for a wild weekend of debauchery requires plenty of outfit options, which is where L.A.-based costume designer Danielle Hollowell and Atlanta-based assistant costume designer Provi Fulp came in, dressing the film’s leading ladies — Regina Hall, Queen Latifah, Jada Pinkett Smith and breakout star Tiffany Haddish — for their nights on the town in the Crescent City.

New Orleans served as the primary costume inspiration, says Hollowell. “The color in the Crescent City was the great equalizer and we used that to our advantage. The minute we got there, we knew the city was full of life and bold people,” she tells The Hollywood Reporter.

Here, Hollowell and Fulp, who both previously worked with Lee on The Barbershop: The Next Cut, break down each character’s look, from Hall’s power style to Haddish’s bright, bold numbers. 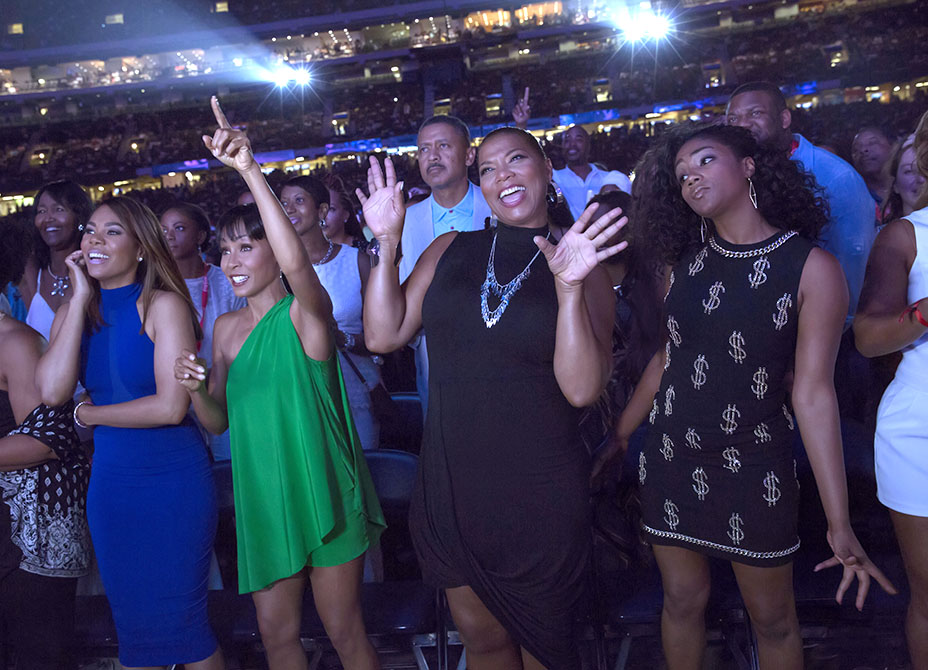 First of all, please tell me about those hilarious bedazzled denim vests that they brought from their college days on the trip.

Hollowell: On the page, it just said “vests” and we had to flesh out what that meant for these sisters. Also, it had to be something that Jada’s character could make at home. We researched the ‘90s and [thought about] something that could reunite them.

Fulp: We really wanted this to be authentic to the time and bring it back to the ‘90s [when they were] in college. As Danielle was saying, Lisa [Smith] has always been the artsy one and does the sewing.

When designing the #FlossyPosse vest, we wanted these denim “beauties” to reflect character #lisa played by #JadaPinkettSmith artsy ability, for years she always sewed, stitched, crafted things for the girls. This vest is the ulimate collection of vintage pins, patches, and 90s airbrush to signify the beginning of their clique the #flossyposse …@daniellehollowell and I wanted each vest to fit the different character personalities. If you watch closely you will see that #dina @tiffanyhaddish has a wild pin with the tounge out on her collar #sasha @queenlatifah #shoepatch for her fancy shoegame #ryan @morereginahall pearls and #lisa #JadaPinkettSmith “you cant buy sisterhood” patch. Lots of man hours on these vests but lots of fun touring #neworleans looking for unique items to put on them! #girlstrip @girlstripmovie #costumedesigners

Let’s start with Regina’s character, Ryan, and how you both established her wardrobe?

Hollowell: We knew she was a business woman and she’s very successful, so she has money. All her clothes reflect that. She’s the kind of girl that’s just a power woman and it reflects in the designers we chose for her, like some Stella McCartney, Victoria Beckham, the Misha Collection, Roland Mouret and Zhivago, who made the blush-colored dress she wore. Everything that we chose had to have some kind of power image behind it.

Fulp: Even down to the wedge shoe she wore in the airport. Even though we knew she was walking through the airport, she’s in an Aquazzura wedge with a Stella McCartney off-the-runway dress.

Hollowell: We didn’t want to let go of the construction of her clothes. That was the way we did her vision board — everything was very clean, streamlined and purposeful.

How about Queen Latifah’s character, Sasha?

Fulp: We looked at Claire Sulmers from Fashion Bomb Daily. We wanted Sasha to be fashion forward, which a lot of times, for plus-size women, it’s hard to pull off. Every trend is not for every body type, but it can be if it’s done correctly, and Danielle really wanted to capture Sasha in that light and make sure she mirrored Claire, who’s a very curvy girl. Claire always celebrates that she can wear a lot of the trends, so that was our muse.

Hollowell: We used brands like ASOS, Torrid, Missguided. If you see Queen’s character, she’s different from scene to scene, so we let her personality shine, depending on what she’s feeling that day. One day she’s the very casual, down-to-earth girl, [another] she’s like a ‘40s pin-up. I think that’s a very millennial trend right now where you never know what fashion is going to show up when it shows up in the room. It could be grunge girl one day and the next day could be your Vogue editor — I relate to that a lot because that’s actually how I dress.

Fulp: Yeah, me too. You dress how you feel.

Hollowell: When they went on the zipline, for example, we knew immediately that we wanted her to be in a jumpsuit because we knew she’d be running and jumping up and down. That actually informed that character.

Fulp: This story is really hilarious. As we talk about how we dress based on how we feel — I love vintage, so I walk into the office with this truly authentic Spanish dress. It has a huge hand-embroidered Toucan on the front; I used to live in Panama so it’s from there. I walk in and Danielle’s like, “That’s the ugly dress!” and I’m like “What are you talking about?” and she says, “What you’re wearing is the ugly dress, I’m going to remake that.” She took it to the producers, but they thought it was way too over-the-top, but Danielle loved the premise of it being humanitarian because an indigenous tribe really did make my dress, and we thought it would be cool for the character to have this backstory. But then we ended up finding this multicolor parrot dress at J. Crew and we were like, “This is it.” 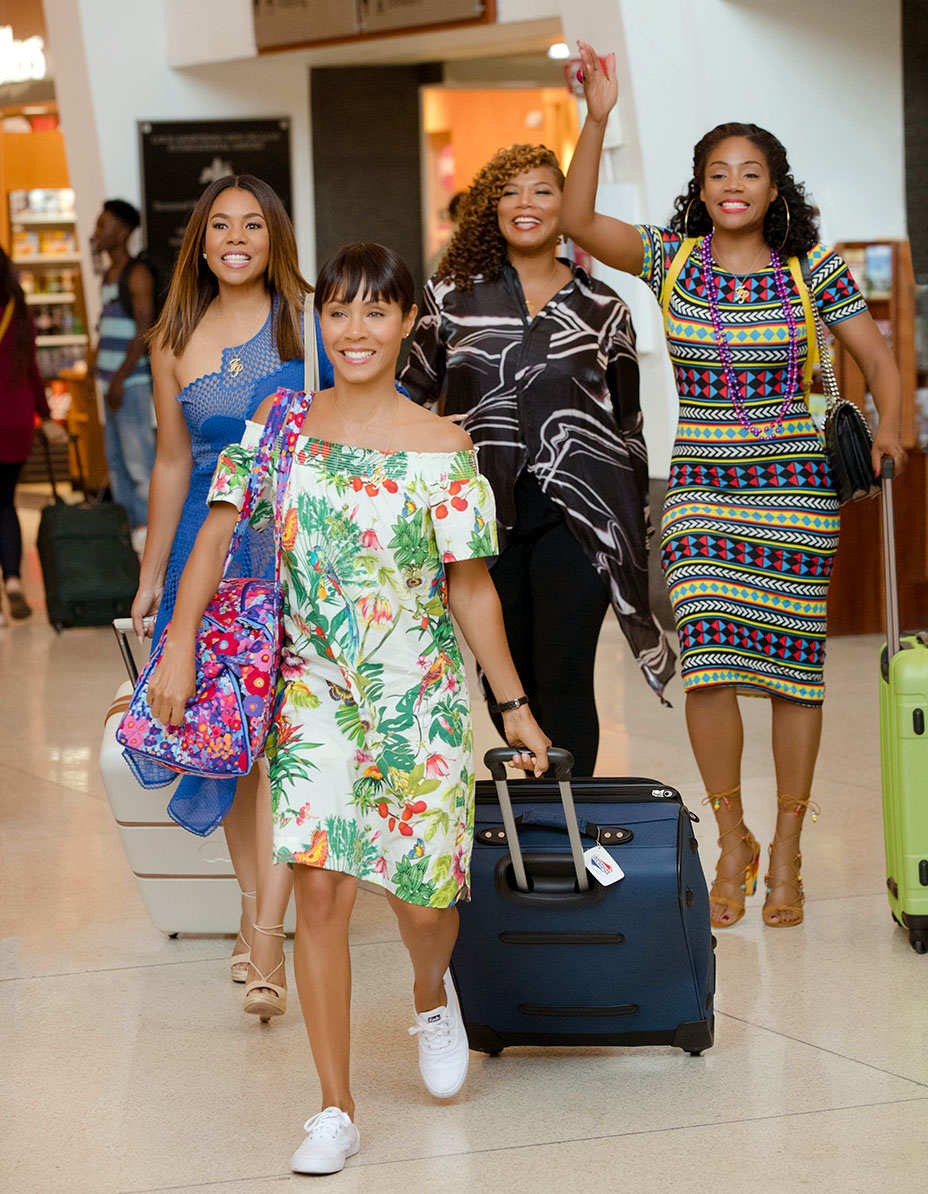 Hollowell: So my favorite dress is the one she wears when getting ready to go to the night club.

Fulp: There were two extremes: it went from the Dolce & Gabbana top with the daisies on it and the Alice & Olivia skirt that’s got fringe hand-stitched embroidery all over it, which doesn’t look good together even though Lisa thinks so, and then we looked for the sexiest dress ever. We wanted it to be expensive because Ryan gives Lisa the dress so it has to be from the Ryan collection of fabulousness. Bao Tranchi made this dress called “Ruby” and you can’t wear any underwear with that dress — it’s literally like a fishing net. But everyone knows Jada has a killer body. I also want to say we gave her that tag line about the Guatemalan tribe making her outfit. They took it further and called her a Puerto Rican grandmother.

Hollowell: She was the last person to be cast, so we had not shopped for her yet until the last second. We knew what we wanted her to look like, but she walked in and informed everything for us. We knew that was Dina and we just went for it with all her choices — bold, bright and everything that New Orleans stands for.

Fulp: When Danielle and I were collaborating and thinking about which designers we wanted to use, we thought about how there are certain things that designers make that you love but you would never dare to wear that in real life. We knew that Dina was that bold.

Hollowell: We put her in that money Moschino dress. That Anthony Vacarello dress, when she sees P. Diddy, was even shorter than that. We had to add a little bit more. (Laughs.). And then the pasties, we had all these different choices — Do we do hearts? Do we do stars? Or do we do tassels? We ended up choosing tassels with a glitter heart. This is how we knew this dress was perfect because it was cut so low.