For Universal’s R-rated comedy, Lee aimed to capture that magic — a notion popularized by a 2013 hashtag and disseminated by figures from Solange Knowles to Barack Obama — with an authentic rebuttal to reality shows like Love and Hip Hop and the Real Housewives franchise. “I wanted a counterbalance to women sniping at each other or throwing drinks in each other’s faces; I wanted some real relationships. And my wife’s book club watched the movie as one of my first audiences, and they laughed and loved it and said, ‘I love how soft they are with each other.’ If that’s part of the takeaway of this bold, outrageous comedy, that’s great.”

Producer Will Packer on 'Girls Trip,' Discovering Kevin Hart and the Myth of Black Films at the Box Office

Ahead of the Friday release of Girls Trip — which stars Regina Hall, Queen Latifah, Jada Pinkett Smith and Tiffany Haddish as four lifelong friends who behave badly while vacationing in New Orleans — Lee tells The Hollywood Reporter of Haddish’s incredibly juicy gag, those Set It Off Easter eggs and his potential Best Man sequels.

What do you hope women, especially black women, get from Girls Trip?

My wife watches a lot of reality TV — Love and Hip Hop, Real Housewives, Basketball Wives — and I don’t really like it. It’s just not for me, but there’s the desire to see yourself onscreen. Everybody wants to be represented in a way they feel is authentic. I’m hoping black women are gonna come out in droves for it, and prove to the industry that four black women can open a movie and it does not have to be about the space program, OK? Hidden Figures did extremely well and I’m extremely happy for that movie to have done that — it’s unprecedented! — but here we are for women who exist in real life and don’t get an opportunity to see themselves like this. I’ve always done movies with universal themes but with cultural specificity, and my dream to make so-called African American movies mainstream. I’d love for people who aren’t black women to give this movie a chance because it’s still a comedy and you’re gonna enjoy yourself.

How did this movie begin?

[Producer] Will Packer and I had been trying to work together, and he approached me at the end of 2013 to do a movie about black women going on a trip, behaving badly, getting away with it, and husbands are none the wiser, and just having some female empowerment. Right off that pitch, I was 100 percent in. Kenya Barris and Tracy Oliver pitched a take that was funny, wild and had heart, which is the combination I really like when making movies.

Pitching it to the studio, we had a couple different takes. There was one that was even more outrageous that we were leaning toward, but the two female executives on the movie said, “I like them both but I want to go on that trip; the other one feels a little bit more like a nightmare.” 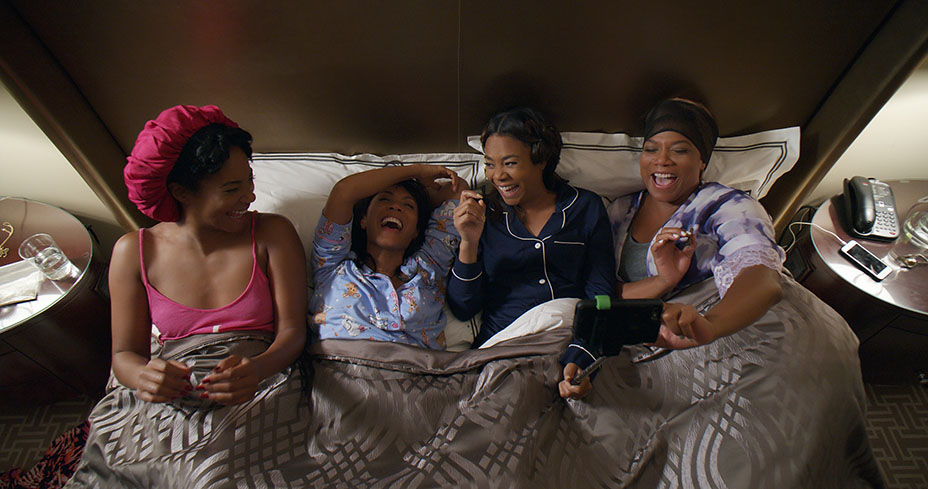 Was there ever a question that the movie was too raunchy?

It’s funny because we brought in all these great female writers who gave us ideas and jokes and things, and they were just always talking about penises. It’s like, we have enough penis jokes! We decided, let’s push the envelope, let’s not be afraid. And for me, comedy can be empty if you don’t care about the characters. I wanted you to care about them to make the laughs that much funnier.

In terms of sex talk, this is what women talk about and we’re getting an inside glimpse of that. When I did The Best Man, one of the most successful scenes is when they’re at the card table talking about women and relationships. For women, it was like being a fly on the wall; for men, it was like, that’s us, that’s our true authentic selves. We wanted the same thing here, and to not think about who is watching. Just, let’s be authentic and true to the characters. If it ever got too nasty, [the cast] always let us know. Like in the scene where they’re all arguing, Regina was very cognizant of not wanting to curse the other women out. I never necessarily advocated for them to call each other bitches or tramps or whatever, but I listened to how they wanted to play that scene.

This takes place at the Essence Festival in New Orleans. What’s the most difficult part of shooting a movie during a live event?

All of it. [Sigh] Gosh, it was tough. Celebrities come to these things and people want to shake their hands and take pictures with them, but our actors had to be characters! But there was no other way to get the production value we wanted, so the audience still has an immersive experience while seeing all the cameos. There was a lot of coordination with security — we wanted to surround our actresses with our own extras — and get cooperation from all the musical artists like Mariah Carey, Maxwell, MC Lyte, Common, everybody. And we had to coordinate with Diddy about what he was gonna do — all we really wanted was a look when [Haddish] exposed herself to him, and then he said, “Maybe I’ll bring her onstage with me.” It was all improvised: he reached down, Tiffany reached up, and there was a six- or seven-foot amplifier she had to scale over, and she’s in a short dress and high heels. Latifah — credit to her — ran in there and gave her a boost. Thank God Diddy allowed her to dance up on him and get her makeup on his white suit.

How did you cast the four women?

I put Regina in her first movie. She’s been the best friend, the sister, the wife — it was time for her to be the leading lady. I knew that even though the role wasn’t written funny, Regina would find pockets to be funny, because she’s so gifted and smart in that regard. Then we thought, maybe we can reunite the sisters of Set It Off, Jada and Latifah. They were both interested and weren’t gonna do the role without one another, and it’s the first time they’ve been onscreen together in 20 years.

For Dina, we saw a lot of people and Tiffany had the goods to be in the moment and improvise on the material. There were many times that Tiffany decided that she was just gonna go for it, and you have to let an actress like that have the freedom she needs to play. I didn’t know how she was gonna handle the grapefruiting technique — we thought, she should demonstrate it and not just talk about it. [Laughs] We had a few takes because I had to tell Jada and Latifah, “You gotta just bite the inside of your cheeks or something, because I don’t want you to laugh!” 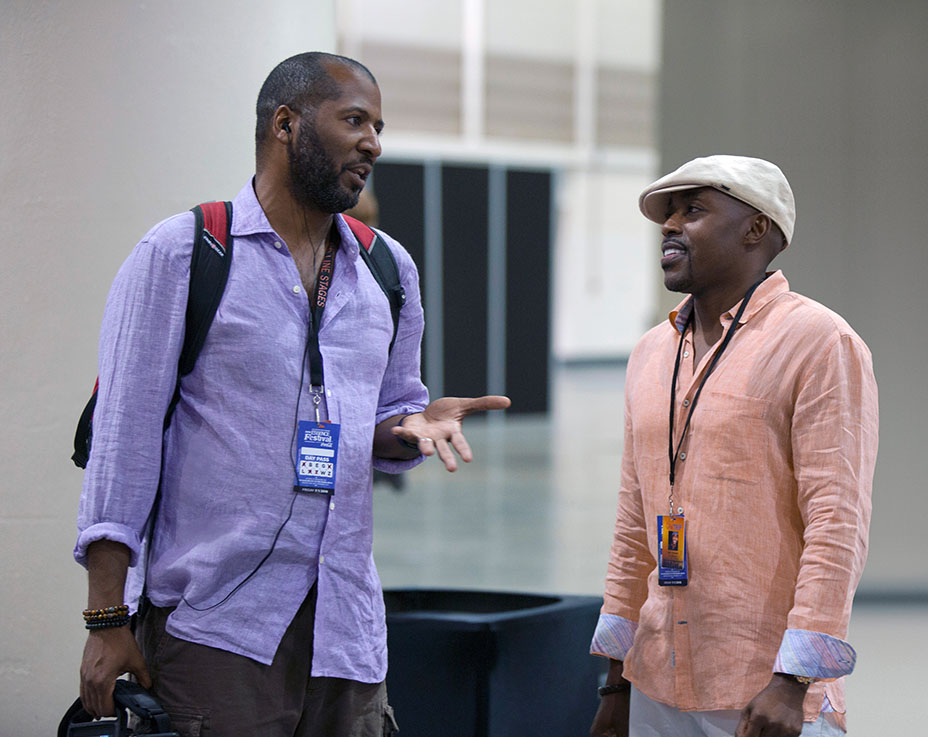 Let’s talk about those dance sequences.

One of these days, I’m gonna do a movie without a dance sequence!  [Laughs] But people seem to respond well to them. Jada Pinkett and Tiffany Haddish are amazing talents that can get down, and I brought in choreographer Jamal Sims. [The throwback line to Set It Off] was Will Packer, and we made sure we had wigs and the same sunglasses they had in Set It Off when they robbed the bank.

You’re teaming up with Packer again for Night School with Kevin Hart.

Yes. As soon as I get off this call, I’m going into a writer meeting. We’re about seven weeks out from shooting, and we gotta whip the script into shape and do casting. I certainly wasn’t planning on going back to work so soon, but it was a golden opportunity to make a movie that can say something about the education system in America. Not everybody learns the same way, and one size does not fit all. It’s also a movie about second chances and diagnosing learning issues. But at its core, it’s a comedy.

I would love to do it. The script is written, and there’s a desire on the studio’s part and the actors’ part. That movie helped us all, and they’re all doing other movies and shows and headlining things — they’re not just part of an ensemble. It’s hard to coordinate everybody’s schedules and get the right budget that we think would tell the right story. But in my mind, I’ve got two more to tell, including [Wedding]. In my heart of hearts, that’s what I would do, but that would be it. And yes, there will be a dance sequence.