“I give you truth in the pleasant disguise of illusion,” says Tom Wingfield, the thinly veiled stand-in for playwright Tennessee Williams in the opening monologue of his semi-autobiographical memory play, The Glass Menagerie. In a bold experiment that’s often riveting but seldom wholly satisfying, director Sam Gold rips away illusion like a bandage off a wound — along with other signatures of the playwright such as poetry, magic, artifice — in a forensic examination that fights against the text just as Tom clashes in his love-hate relationship with his domineering mother, Amanda. Despite some fine work from the actors, you end up being moved more by the sheer resilience of the writing than by the intrusive presentation.

That’s not to say this destined-to-be-divisive production doesn’t demand to be seen, not least for the chance to watch Sally Field uncover the raw, wrenching despair beneath the abrasive nagging of her tenacious Amanda. This is the seventh Broadway revival of The Glass Menagerie since its premiere in 1945, the most recent of them a revelatory 2013 production with Cherry Jones and Zachary Quinto. So it makes sense to take a risk on a radical new approach rather than regurgitate tradition. Nothing ventured, nothing gained.

Gold’s recent bare-bones production of Othello, staged in a plywood box that encased audience and performers alike, was a triumph of visceral dramatic storytelling that injected scalding contemporary urgency into a 400-year-old play. But in twisting Williams’ incomparable voice into the service of Director’s Theater, he has allowed the fresh insights to be overshadowed by the losses.

Williams was famously flexible about conceptual approaches to staging his plays, particularly this one, in which the abstract sphere of memory in itself can be read as a rejection of realistic conventions. Gold’s vision of memory is a harsh black void, an almost empty stage with a painted black brick rear wall, in which the past claws its way back into the present with no comforts and nowhere to hide. That applies to the audience as well. The house lights remain up through the early scenes, only gradually dimming long after we bear unsettling witness to the family’s arduous task of getting daughter Laura (Madison Ferris) onto the stage.

Ferris uses a wheelchair in real life as a result of muscular dystrophy, and is able to move independently of it only with strenuous use of her hands. Entering from audience level at the side of the theater, Amanda folds the chair and lifts it with visible effort onto the stage. She then returns to the bottom of the steps as Laura pulls herself up them, one by one, moving backwards as her mother tenderly lifts her legs to place them on each successive step. 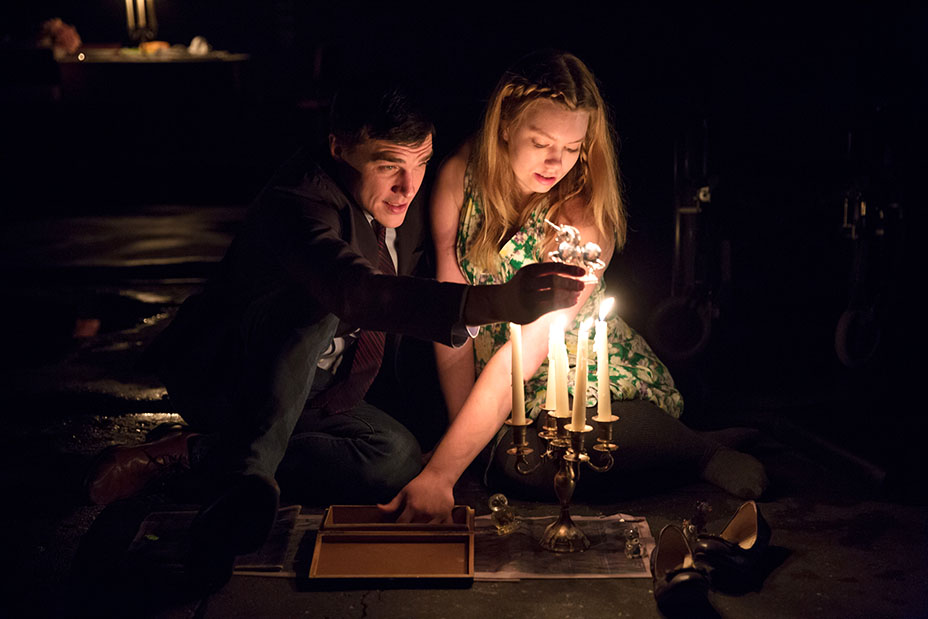 It’s an agonizing process, painful to watch, and a forceful symbol of the physical burden Amanda has had to shoulder — abandoned by her boozing husband during the Depression, and scraping by on the meager paycheck of her begrudging son Tom (Joe Mantello), who long ago would have followed his father’s example and fled if not for his loving concern for Laura.

But most of the vulnerability in Ferris’ performance is in the physical exertion. Elsewhere, her flat contemporary intonations seem like those of a bored young woman detached from her surroundings, rather than the fragile, terrified girl retreating into illusion that Williams wrote.

Gold’s intent appears to be to give Laura a will of her own, to make her more different than pathologically shy. This does eventually pay off in a transfixing take on the candlelight scene, partly set against an onstage downpour, in which she overcomes her awkwardness and sheds her inhibitions in an intimate conversation with Jim O’Connor (Finn Wittrock), the high school crush whom Tom has invited to dinner at Amanda’s insistence.

Wittrock is superb in the “Gentleman Caller” role — all handsome openness and plucky ambition hiding the disappointments of his diminished golden-boy promise. Ferris, in addition to being stronger than the standard Laura, is also more beautiful; the equalizing sweetness of their connection in that post-supper scene makes the dismantling of her moment of happiness all the more poignant. Likewise, the image of Tom, bathed in a separate pool of candlelight behind her on the otherwise dark stage, intently watching and listening to every word of their exchange, his apprehension etched deep into his face.

Mantello’s performance, however, is a mixed bag. There’s exquisite feeling in moments when he reaches out and touches Laura with a fraternal love steeped in guilt and remorse. But casting the role much older than the norm (the actor is only 16 years Field’s junior), coupled with his sardonic delivery, lessens Tom’s desperation to escape from this suffocating life — both the airless apartment and the closet of his inferred homosexuality. Clearly, this Tom has long since seized his freedom and is now cohabiting with his corrosive memories, but that undermines the tension of his participation in the play’s “present.” 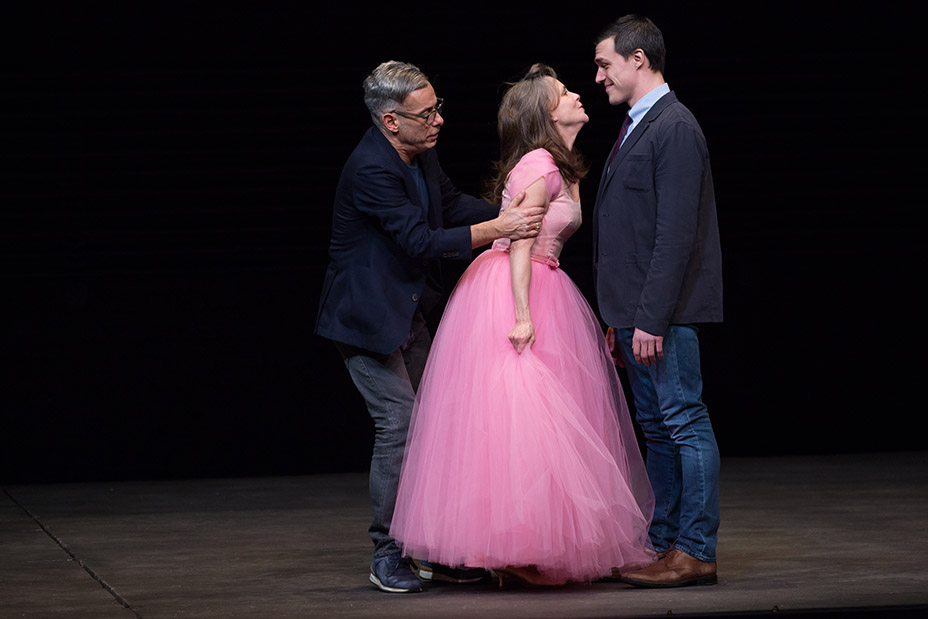 Like the rest of the cast, Field speaks in her natural voice, affecting no trace of a regional accent. She played Amanda in an acclaimed 2004 Kennedy Center production as part of a Tennessee Williams festival and has been hungry to take a bigger bite out of the role ever since. But this production tamps down many of the qualities that make the part the equivalent in American drama of a King Lear for actresses over a certain age. Her Amanda is brittle and shrill, fussy and annoying even when she’s busily scurrying back and forth from the props cart. So it’s a tribute to Field’s skill that she digs in and locates the well of pathos, the searing hurt and fear beneath the intractable grit.

Despite the girlish excesses of the pink tulle party frock that costumer Wojciech Dziedzic sticks her in for the dinner scene (when her flirtatiousness becomes so predatory she looks likely to wrap herself around manly young Jim at any minute), Amanda’s wistful reveries about her past are played almost straight. The humor does frequently surface, but in working hard to strip away any hint of campy grandiloquence from her embroidered recollections of her genteel youth, Gold and Field also render the character less interesting.

Her disconnect from reality comes across almost as willful cruelty when she chides Laura for using the word “cripple,” insisting that her “little defect” is hardly noticeable. Gold clearly has no interest in literal representation. But the incontrovertible reality of the wheelchair onstage constantly takes us out of the play when Amanda instructs her daughter to go sit on the (invisible) couch or go to the grocery store for butter. We have observed over and over just how much struggle such actions would require of her. Indeed, the revelation in the text that Laura has been spending her days strolling around the zoo when Amanda thought she was attending business college here becomes faintly ridiculous.

In this play, in particular, though perhaps in Williams’ work in general, the ornate music of the author’s language is an uneasy fit with Gold’s pared-down world. The director’s best work removes the barriers between actors and audience to thrust us into the characters’ reality. But the starkness of the theatrical concept here calls attention to itself and mostly keeps us shut out. Another of the great female Williams protagonists, Blanche DuBois in A Streetcar Named Desire, clung to the flattering fantasy of a pretty paper lampshade and shrank away in terror from the naked bulb. Gold places The Glass Menagerie for much of the time under interrogation lighting — metaphorically and often literally — minimizing a conflict that is quintessential Williams.

The result is one of the most hauntingly lyrical dramas in the American canon transformed into a blunt dysfunctional family play in which indelible melancholy gets trampled by anger and bitterness.