Last year Glenda Jackson joined the conversation about the dearth of meaty roles for actresses, adding that even Shakespeare failed to provide women with a spectrum to match that of Hamlet to Lear. So it seems appropriate that for her return to the stage, aged 80, she should appropriate the latter of those roles.

For its sheer sense of history, nothing quite compares in London theater this year to Jackson taking on King Lear. One of Britain’s greatest actresses, who turned her back on acting for a career in politics, returns after 25 years not with a supporting turn in the regions, but with the Everest of roles at the iconic Old Vic. Since she’s playing a man, it feels reasonable to say she’s certainly got balls.

And more than that, Jackson delivers, brilliantly — not a self-aggrandizing performance that seeks to leave us crumpled by the bellowing heights of Lear’s tragedy, but one which exerts the discomforting grip of familiarity. In Deborah Warner’s splendidly lucid, punchy, mordantly funny production, this is a Lear whose hubris and foible, and particularly his dotage, elicits a resonant pathos.

When Warner cast Fiona Shaw as Richard II in 1995, there was outrage; today, gender-blind productions of Shakespeare are common. What’s more interesting here than Jackson’s gender is what the actress is willing to share of her age, bravely hiding nothing of the unavoidable ravages of time. Lear is “four score and upward,” and for once we get a genuine, palpable sense of the vulnerability of old age.

Not for the first time, Warner keeps her staging to a minimum. There is no set as such, save for a row of blue plastic chairs for Lear’s ill-fated division of his kingdom, later some trestle tables that will double as Kent’s stocks, and a giant fridge stocked with beers for Lear’s “riotous” knights. The space is shaped by massive mobile panels, with markings such as ‘moveable wall.’ Along with the display of scene numbers, these have a minor Brechtian effect that focuses attention on the psyches and machinations at play.

Similarly, the approach of this modern-dress production is, with two notable exceptions, purely functional. With the sisters, for example, Celia Imrie’s conniving Goneril is in a prim trouser suit, Jane Horrocks‘ more flagrant bad girl in tight jeans and high heels and Morfydd Clark’s straight-forward Cordelia in jeans and blouse. 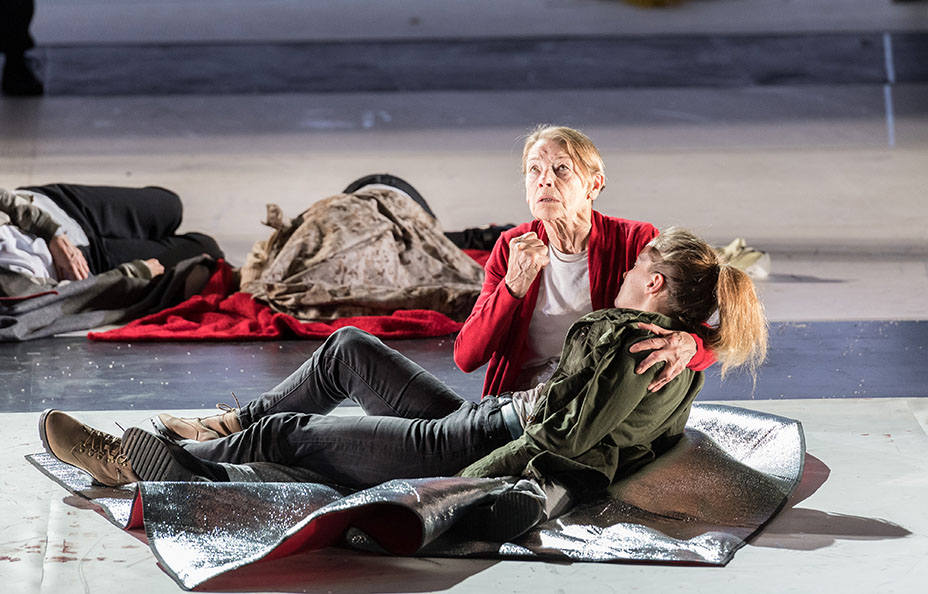 Lear is something else. Lear likes red. We’ll see Jackson variously in a flowing red shirt, a red waistcoat, a red fur coat and, when the king is trying to be one of the boys with his entourage, a red baseball cap. With her gaunt features and hair cut short, Jackson can pass well enough for a man, though that’s not really the point. More important is the contradictory image conveyed by this Lear, which is at once flashy and frail.

When Jackson voices the intention to “crawl towards death,” it is delivered as comic irony, yet with such an ancient growl that we can readily believe it. Similarly, Jackson’s hands tell conflicting stories: In repose, they are clenched, suggesting infirmity; but when Lear is enraged, she uses them like spears, jabbing at the air. The actress’ innate power — she still possesses that staccato intensity in her delivery — reminds us of the man Lear once may have been; she allows the reality of her aging body to constantly remind us of what he has become.

This Lear is unwilling to grow old gracefully, yet is about to be undone by decisions marked by senility. For once, those sudden mood swings have a fitting context. When Regan talks of “the infirmity of his age” and Goneril reminds her sister to “let his disposition have that scope that dotage gives it,” the lines now sing.

Warner crisply builds both the parallels between the king’s and Gloucester’s parental missteps, and the variations on madness in the play, which here seem more like a collective hysteria, as folly and politics combine to plunge the kingdom into chaos. In that sense, this is a production for the times; one of the night’s biggest laughs comes when Jackson, not long out of Parliament, speaks of “scurvy” politicians.

Alongside Jackson, the production’s other star turn is from Rhys Ifans as the Fool. The Welshman bounds on with his own sartorial flourish, a Superman shirt and cape, which suits the flamboyance of a highly inventive performance, as well as lending ironic piquancy to the Fool’s fearfulness of the world his king has created.

The actor’s variation on the Fool’s egg trick is hilarious, the Dylan-esque inflection on a song inspired; but the fun is accompanied by a tortured wisdom behind the eyes. The casting of Ifans is also canny for a purely visual reason, his great height alongside Jackson’s stooped and diminutive frame accentuating her vulnerability, particularly as the pair enter the storm — the one moment when Warner and co-designer Jean Kalman pull out the stops.

The evening isn’t without flaws. Imrie’s ill-at-ease Goneril and Simon Manyonda’s tame Edmund undercut the play’s malevolence. And the whole is so vigorous that the sense of loss, even Lear’s, isn’t particularly felt. That said, Jackson’s memorable return has already affected us in ways we simply didn’t expect.