Pacific Coast Highway was once the ultimate dividing line between prime and simply passable Malibu real estate. The beachside nabe, which recently joined the ranks of so-called sanctuary cities by a 3-2 vote of its City Council, remains a hot market (median home value is $2.9 million, up 5.7 percent during the past year). But these days, certain sections of inland real estate are luring buyers to migrate to the once-unimaginable side of the highway.

Nowhere is that land-side boom felt more than in Malibu Park, the gently sloping, bluff-side enclave perched above Zuma Beach and bracketed by Bonsall Drive and Guernsey Avenue. Originally developed in the late 1950s, the area was called Horizon Hills for its jaw-dropping coastal views from Palos Verdes to Leo Cabrillo beach. In the 1980s and ‘90s, the area, which has equestrian facilities and easy access to some of the best hiking trails in Malibu, attracted such high-profile types as Nick Nolte and Michael Landon, who purchased a 5-acre property and built a hacienda-style home with a stained-glass aviary, lilypond and stables. In recent years, however, Malibu Park has been luring a new wave of high-profile buyers and renters, drawn by large lot size, the potential for 180-degree beach views and the promise of paparazzi-proof coastal living.

“You still get the ocean views, but it’s incredibly private. That’s why Brad Pitt is renting there now — he wants to be left alone,” says Santiago Arana, managing partner at The Agency, who contrasts Malibu Park with nearby beachfront properties where “anyone can drive a boat or jet ski and get pictures.” And while escaping notice may not be as much of a concern to 74-year-old Sid Bass, the Texas billionaire philanthropist nonetheless paid $500,000 more than the $14.5 million asking price to acquire Patrick Dempsey’s 3-acre gated estate in 2015. Arguably the architectural jewel in Malibu Park’s crown, the corrugated metal compound was designed by Frank Gehry for abstract painter Ron Davis in 1972, when the area was considered a remote outpost of the Malibu real estate action.

“Most people used to think the end of the world was at The Colony, but now people are discovering Point Dume and Paradise Cove,” says Chris Cortazzo of Coldwell Banker International Previews. “Northern Malibu is really nice, and for people who fly privately, Camarillo is easier [than Santa Monica Airport].” 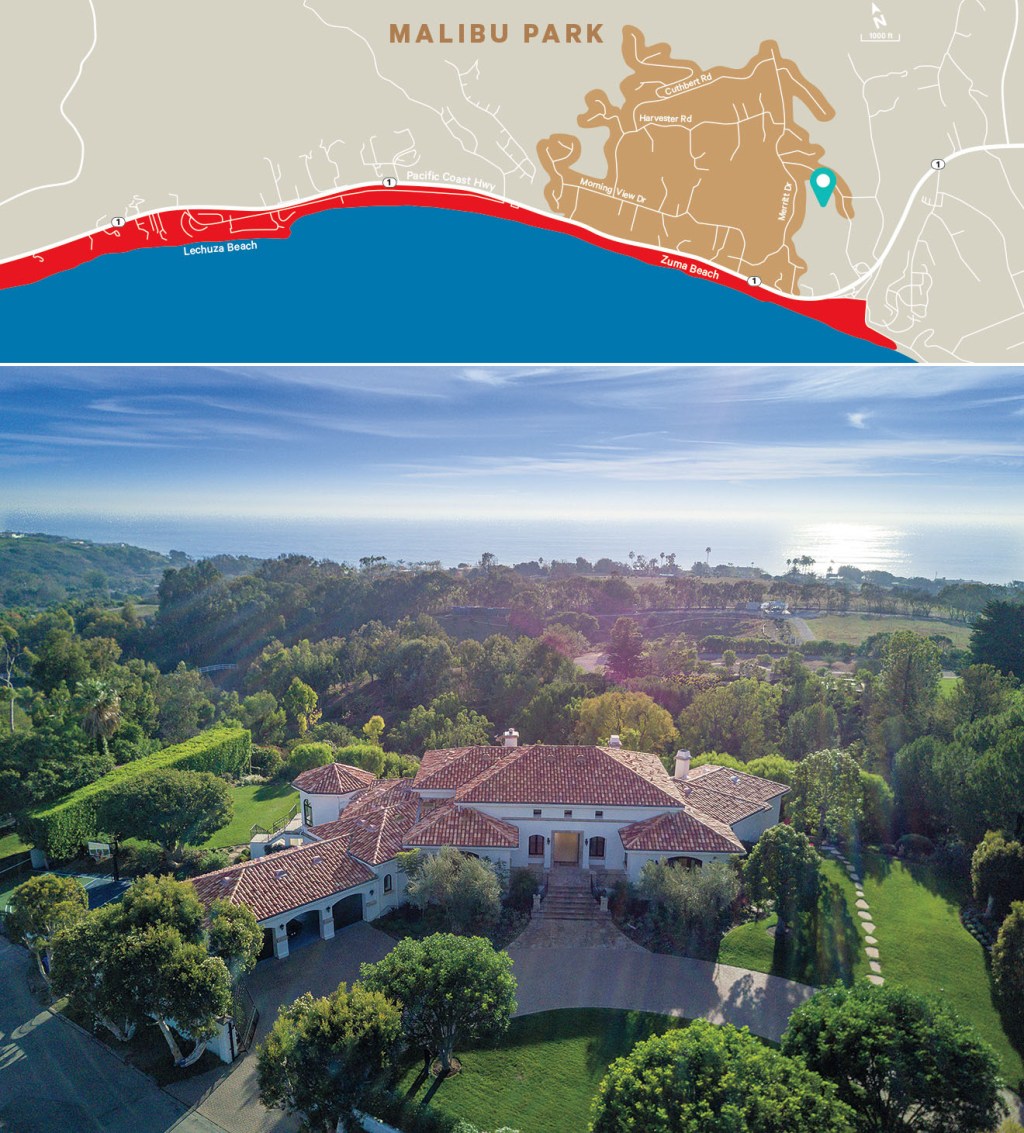 Beyond the stables, riding trails and gated homes, however, real estate insiders say a new variable is driving sales in the area to record levels: concerns over rising sea levels. “The whole ‘being on the beach’ thing has started to fade away in Malibu because of global warming and climate change,” says Sotheby’s International agent Anthony “TJ” Paradise. “Some people will buy on the land side because they’re fearful that ocean-side homes may disappear.” Arana sees a new market rising amid those concerns. “The smaller the beach gets at Broad Beach, the bigger the numbers are going to get here [in Malibu Park],” he says, adding, “Right now, prices are starting to move into the $15 million to $20 million range. Some of that has to do with the fact that in the last five years, people have started looking at beachfront differently.” Arana, along with Mauricio Umansky (also of The Agency), sold Lady Gaga her 10,000-square-foot villa for $23 million in 2014. Situated on 6 acres, the Mediterranean-style compound, previously owned by Warner Bros. exec Dan Romanelli, includes a bowling alley, home theater and 800-bottle wine cellar, along with an eight-stall stable and dressage ring.

Most important, it features sweeping ocean views without the worries of dry sand slipping away. “From Lady Gaga’s house, you actually feel like you’re on the beach — you can even see people walking on the sand — but you’re not on the beach,” says Arana, whose current Malibu Park listing offers a similar sense of beachfront living without the rising sea-level fears: The $13.95 million, ocean-view modern farmhouse sits on more than 4 acres. “It’s got acreage, a tennis court, barn and organic gardens. It’s also gated and extremely private.” 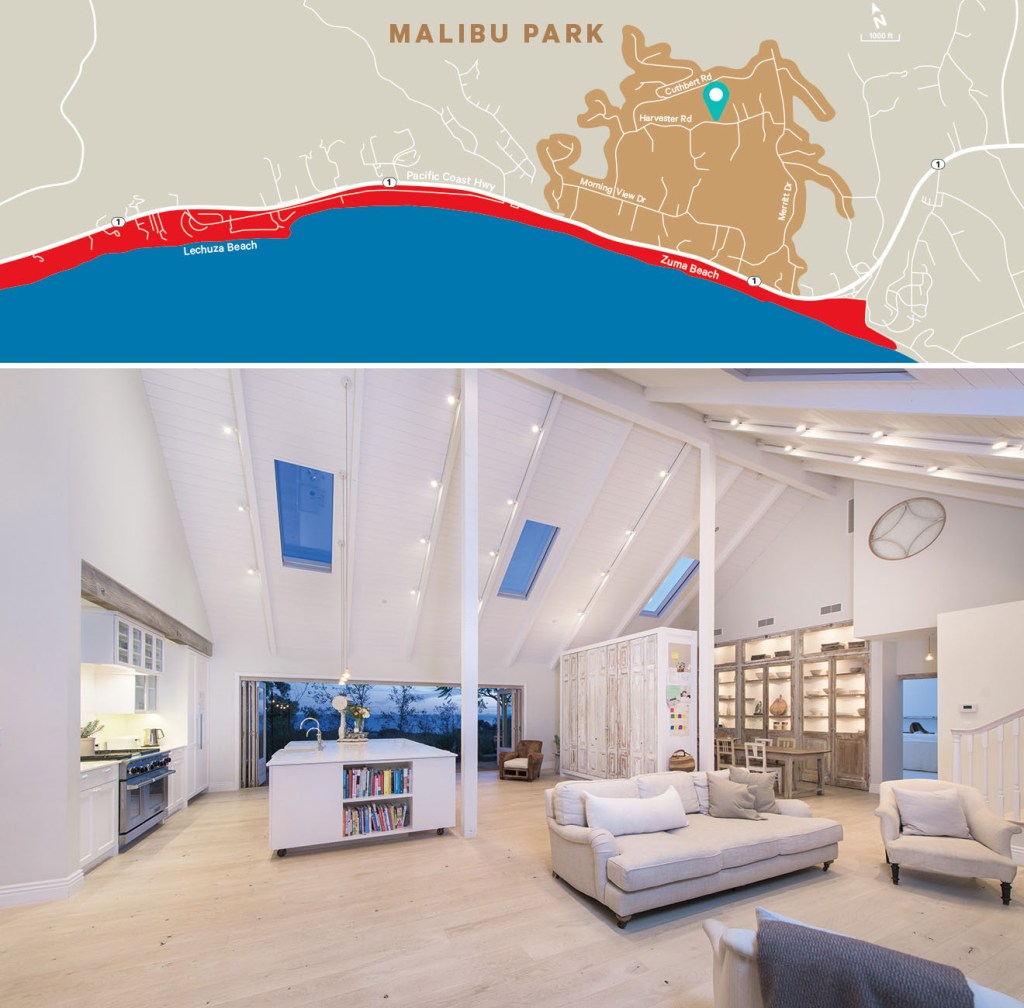 At $15 million, the highest-priced home now on the Malibu Park market is a 12,000-square-foot mansion that includes what may be the largest residential room in Malibu: The ballroom, inspired by New York’s Plaza hotel, holds more than 300 people and doubles as a recording studio. Built by its current owner, violinist Albert Stern, the studio has been used to record by Jason Mraz, Fergie and Incubus. “It’s rumored that Incubus’ album Morning View is named after the studio,” says Paradise.

And while prime Malibu spreads have yet to be swallowed up by rising sea levels, beaches have been. At Broad Beach, the 1-mile stretch of coastline where such A-listers as Steven Spielberg, Goldie Hawn and Kurt Russell, and Michael Ovitz own homes, the wide dunes that gave the area its name have all but disappeared over the past 20 years. In response, residents have spearheaded their own efforts to combat erosion with an ambitious $31 million plan to restore the beach’s vanishing sand. But even if approved, will a transplant of 600,000 cubic yards of sand to the decimated beach be sufficient to fight potentially permanently rising tides?

“The California coast [has] always experienced erosion from storm events, but sea level rise is exacerbating those natural forces. That is expected to become more intensive as time goes on over the next century,” says Steve Hudson, deputy director of the California Coastal Commission. “As the back of the beach gets fixed with permanent development, that will mean that the beach and the wetlands can’t migrate inland and will become permanently inundated over time.”

For now, however, beachfront home prices have not fallen proportionally to the rising waterline — although perched seafront properties, like Cindy Crawford and Rande Gerber’s four-bedroom villa, have especially elevated prices. Currently on the market for $60 million, the beachfront home nestled on a small bluff was purchased by the couple for $50 million in 2015. 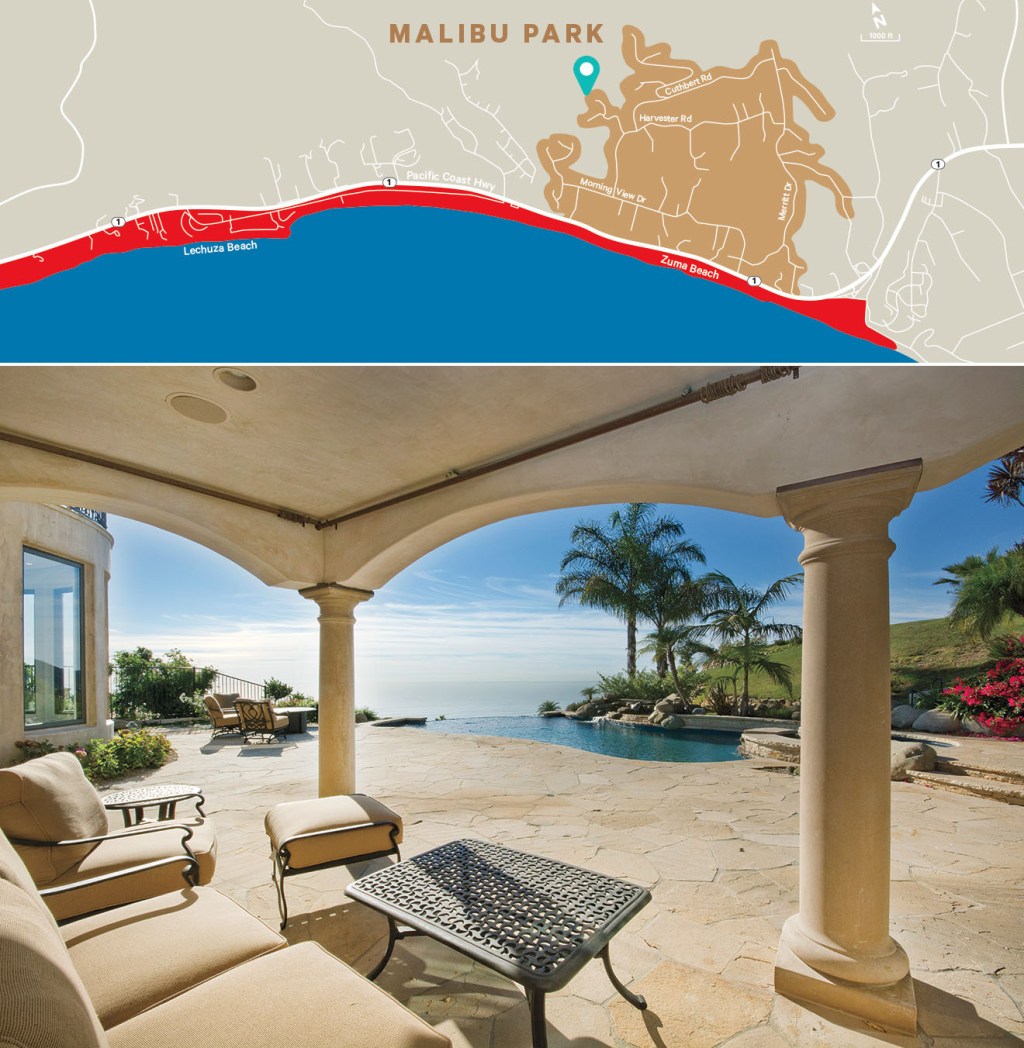 “I have not seen a perceptible difference as of yet,” says Paul Habibi, professor of real estate at UCLA Anderson Graduate School of Management, of the market’s response to climate change fears. “As conditions change, however, this will likely become more of a pressing issue. For better or worse, our myopic culture tends to be more concerned with the effects of interest rates rather than sea level increases.”

As many as 1 million Californians could be affected by rising sea levels by 2100, driving some home buyers to bluff-side areas like Malibu Park, perched 50 feet above PCH. 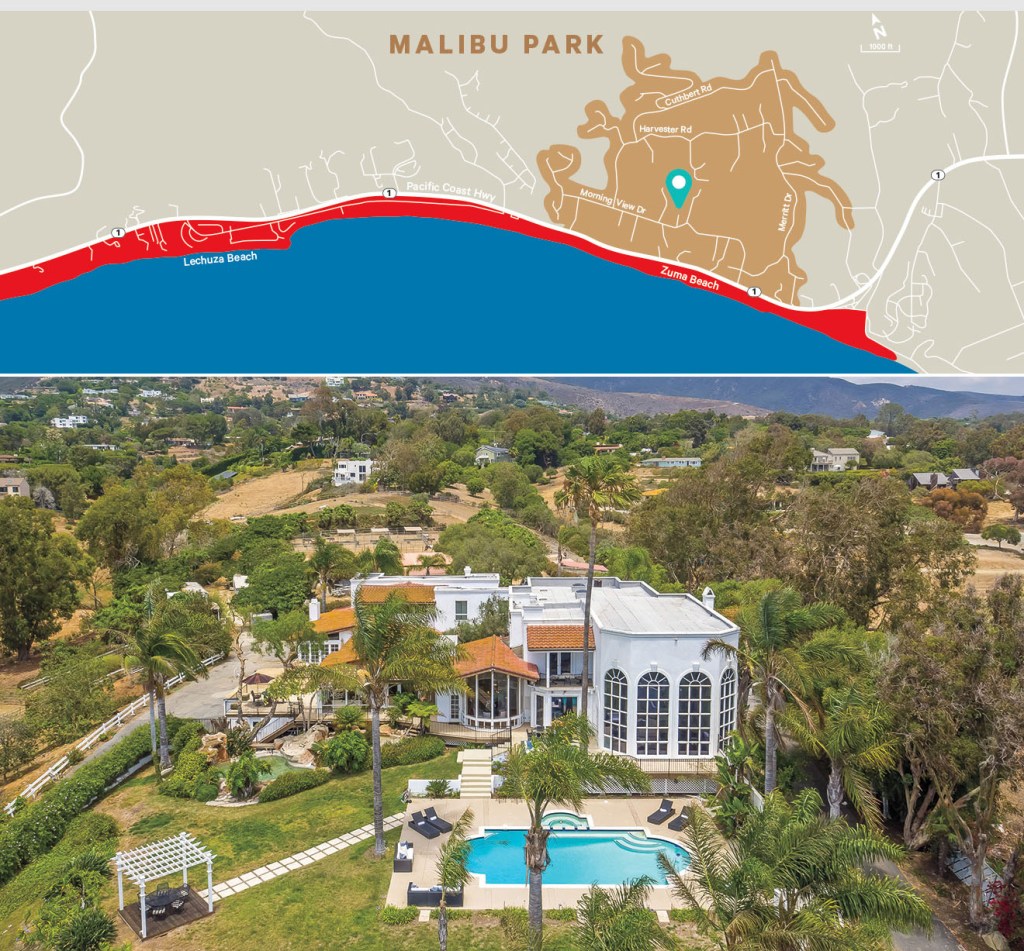 3 WAYS TO SPEND THE SUMMER

Forget worries about rising sea levels when it comes to scoring a Malibu summer rental. “Prices are still going up year-to-year, especially for the short-term-lease, amazing homes,” says The Agency’s David Parnes. The Million Dollar Listing Los Angeles star recently leased a Malibu Colony pool-less home for $275,000 a month. And that’s not even the market’s top dollar as THR highlights options for all takers, from royals to the rank and file. 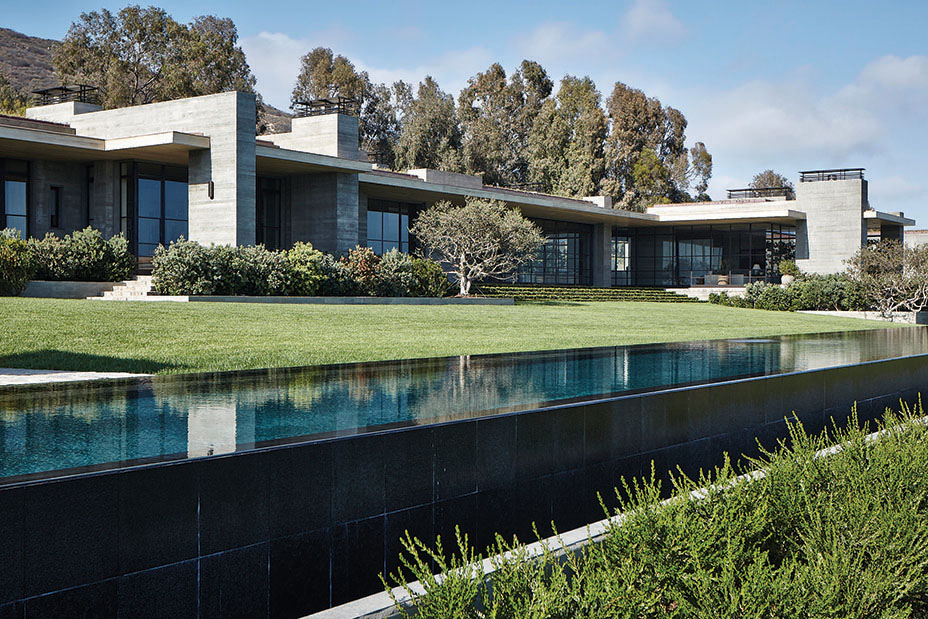 Westside Estate Agency’s Kurt Rappaport, a perennial on THR‘s top 25 agents list, has already booked out his own 6-acre, art-filled Malibu estate — at $750,000 a month, the most expensive rental in the U.S. 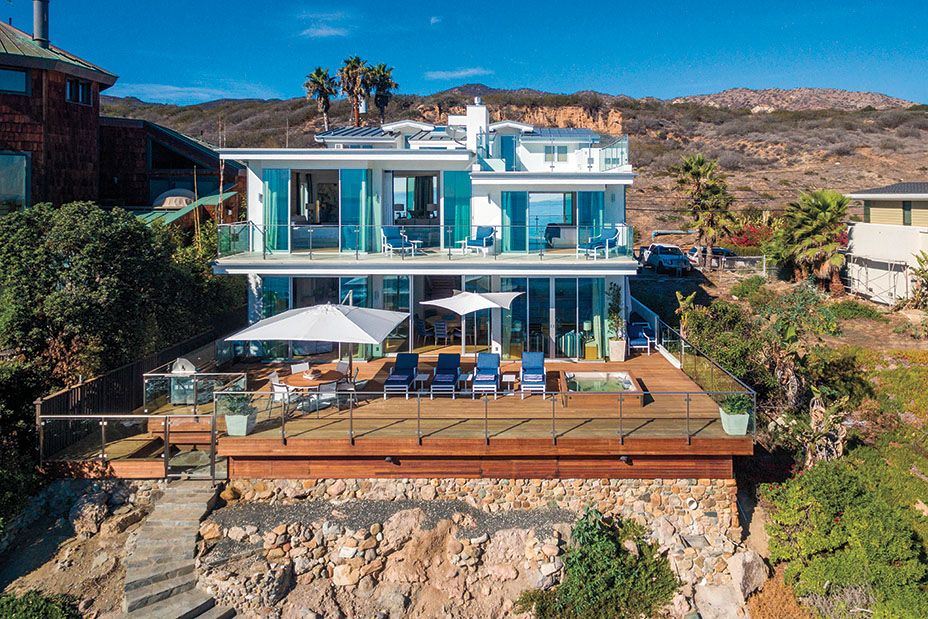 This newly designed, modern four-bedroom home with stunning views, a massive deck and myriad entertaining areas is listed at $150,000 a month by Irene Dazzan-Palmer and Sandro Dazzan of Coldwell Banker. 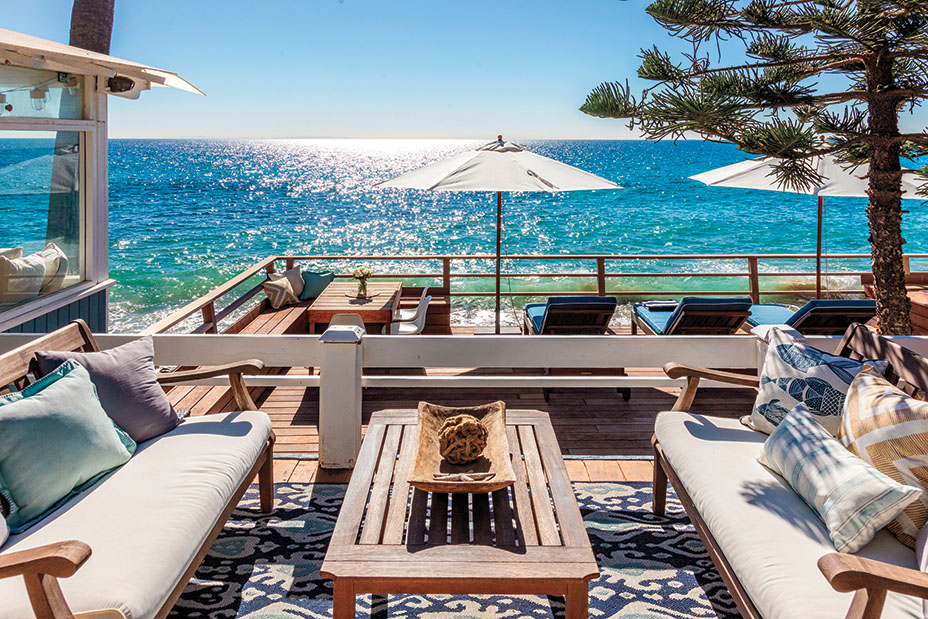 For a mere $30,000 a month, you can call this quaint, newly renovated three-bedroom, situated right on Dog Beach just south of Duke’s restaurant, your home away from home (it’s also listed by Dazzan-Palmer and Dazzan).