Gloria Steinem is so famous she’s achieved first-name-only status. A 2011 HBO documentary was titled Gloria: In Her Own Words. Now comes Emily Mann’s Gloria: A Life, a new off-Broadway bioplay in which Christine Lahti plays the longtime feminist activist. The show doesn’t even attempt to toy with the genre’s conventions, staying in its lane throughout, despite a 20-minute second act that opens up the floor to questions and comments from the audience — it’s referred to as a “talking circle.”

Directed in the round by Diane Paulus (Waitress, Pippin) and put together by an almost entirely female creative team, the production is not as theatrically audacious as its subject was politically daring. What it does is give many audience members a release valve in our tumultuous times.

Decked out in an all-black outfit of flared jeans, fitted top and outsize belt, with large silver rings on her fingers, Lahti channels Steinem’s laidback cool — she looks like a bemused extra in a Cameron Crowe movie about the 1970s L.A. rock scene. (A red scarf in a couple of scenes is a direct reference to the one Steinem wore at the January 2017 Women’s March in Washington, D.C.) Lahti gives an affecting, calmly determined portrayal; it’s hard to think of a better guide than this particular actor through the life of someone who has embodied the fight for women’s rights for half a century.

Mann, who has been the artistic director and resident playwright of the McCarter Theater in Princeton, N.J., since 1991, borrows extensively from Steinem’s writings and follows a straightforward chronological line. The show will be very familiar to viewers of the HBO documentary and readers of Steinem’s 2015 memoir, My Life on the Road — soon to be a movie directed by Julie Taymor and starring Julianne Moore.

After mentions of #MeToo and Time’s Up, Lahti’s Steinem — supported by an ensemble of six women in various male and female roles — travels back to her graduation from Smith College and her early years in journalism, including her notorious 1963 assignment as an undercover Bunny at the New York Playboy Club.

Not that her peers and colleagues were much better than Hugh Hefner’s minions: After rejecting a New York Times editor’s suggestion that they discuss an article in a hotel room, Steinem comments, “Sexual harassment isn’t even a term then. It’s just called life.”

And yet it’s not until she’s 35 that Steinem experiences a complete feminist awakening and throws herself fully into activism. The following scenes, which also act as a 101-level survey of American second-wave feminism, provide the show’s backbone and its most enjoyable moments, though the musical selections are painfully obvious — as great as these songs are, it’s time for directors to take a break from Aretha Franklin’s “Think” and “Respect.”

A particularly awe-inspiring moment is the launch of Ms. magazine in 1972. Imagine that: a publication for women that didn’t bother with fashion, food or beauty articles!

Equally striking, for starkly different reasons, is a clip from The Larry King Show where a female caller berated Steinem, who was a guest, and concluded her intervention with this send-off: “I’ve suspected for the last 15 years that Gloria Steinem should rot in hell.”

Refreshingly, the play doesn’t dwell on Steinem’s romantic life beyond a quick parenthesis about her marriage to David Bale, which happened relatively late in her life and was cut short after just three years by his death. The meaningful connections here are the ones Steinem made with women.

First and foremost there was her mother (Joanna Glushak), who gave up her own journalism career to focus on parenting and ended up having a breakdown. Then there were friends and allies like the feminist and civil rights activist Florynce Kennedy (Patrena Murray), the firebrand New York Representative Bella Abzug (Glushak), and Wilma Mankiller (DeLanna Studi), the first woman to become Principal Chief of the Cherokee Nation. The show eventually circles back to the here and now, with footage of the two activists who cornered Sen. Jeff Flake in an elevator during the Kavanaugh hearings.

That event, almost inevitably, came up in the talking-circle second act, which is where Gloria joins theory and practice by inviting the participation of its (largely female) audience. Steinem herself joined the cast at the Tuesday performance, in effect turning the session into a Q&A — and providing a somewhat spooky mirror image when she stood next to Lahti.

A theatergoer mentioned she had been simmering in anger since the Kavanaugh hearings, to which Steinem replied, in her signature calm voice: “The Supreme Court won’t make us obey any unjust laws.”

“Thank you so much, I needed this,” another woman said.

Amazingly, and infuriatingly, a man spent most of the talking circle texting. This show is in no danger of getting old anytime soon. 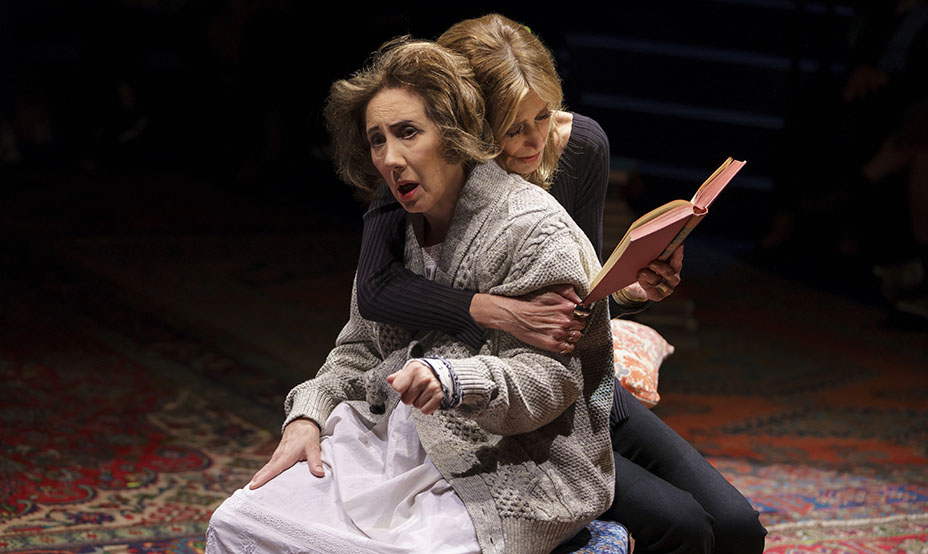