Female leaders across multiple entertainment platforms were honored for their vision and achievements in their respective fields at New York Women in Film & Television’s 2019 Muse Awards on Tuesday. And they shared their advice for all women, in every business.

“It’s extraordinary to be honored by my peers,” Rosenthal told The Hollywood Reporter on the red carpet. “You do so much, you feel like you’re alone, and you’re just pushing a rock up a hill a lot. It’s nice, personally, to be able to take a breath and say, ‘Oh, OK, maybe I have made a difference.'”

Added Harriet director Lemmons, ahead of the New York Hilton luncheon, “This has been such an incredible ride, these honors, especially one like this, [from] an organization that I’ve loved for so long. It’s great.”

Every year, the awards recognize women who are paving the way for change and inspiring people across the country. This year’s honorees stressed the importance of occupying space, never giving up and supporting each other in every aspect of the entertainment industry — in front of the camera, behind it, at the writer’s desk — and in life.

“As a woman, I feel that it’s so difficult to occupy your own space,” Supernatural actress Stern told THR. “We are taught to cross our legs, and that men can leave them open, and I feel like that happens with emotions, as well. Women have to constantly regulate themselves so they’re not too emotional [but also] not too unemotional.”

She received the Loreen Arbus Changemaker Award, named for the disability rights activist.

“I’m not sure if it’s so much change that I’m making, rather than just allowing myself to be all that I am,” Stern said about her honor. “It’s not about making yourself bigger, but don’t make yourself smaller, and I feel like that is how change begins.”

Stern comes from a fourth-generation deaf family, and when she was growing up, she was conditioned to wait around for someone to come and save her or tell her story for her. When she realized neither one of those things were going to happen, she decided to do it for herself and encourages other women and young girls to do the same.

“Don’t wait for permission,” she said. “Just tell your own stories.”

Dowd said she feels like if a woman has hopes and dreams, she cannot fail, especially knowing there are other women who will be there for her. “There is support for you in this world, and you have a right to it,” she told THR.

Dowd also commented on The Handmaid’s Tale not receiving any Golden Globe nominations earlier this week, despite the Hulu series winning the best drama series award in 2018, but she’s not worried. “Let’s spread the wealth,” said Dowd, who hopes the show continues to raise important questions and keep those conversations going.

Rosenthal echoed Dowd’s sentiment and explained that awards cannot be used to judge the impact a TV series or film is making in the world. “As soon as we use any award as the litmus test to our impact, we’re in sad shape,” she said.

At the end of Rosenthal’s acceptance speech for the Career Impact Achievement Award, Robert De Niro came onstage and congratulated all the women who were being honored by NYWIFT. 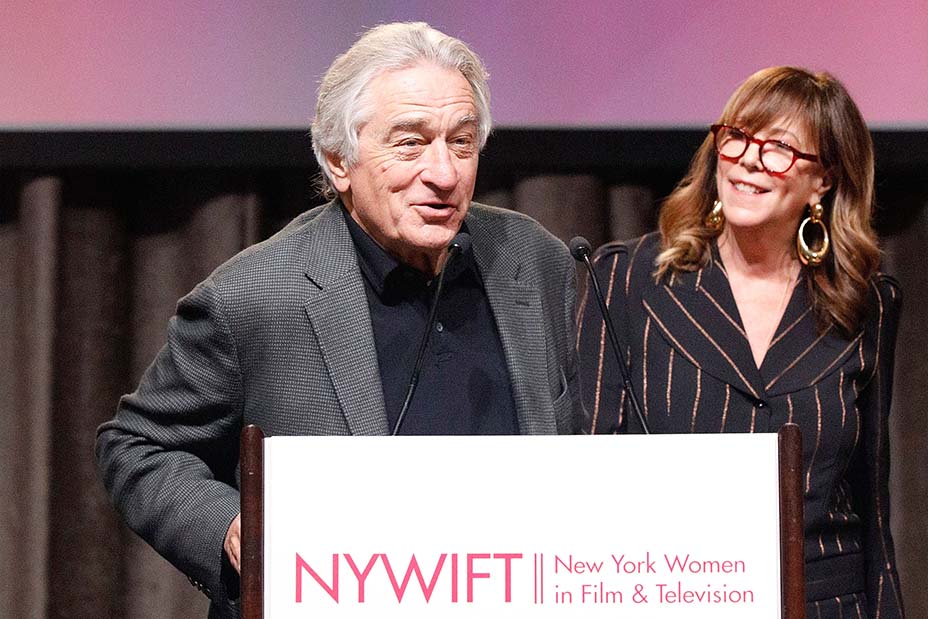 On the carpet, Estefan discussed her upcoming, still-untitled album, which is set for release in the spring. The collection will include five of her older songs with Brazilian rhythms, including a Spanish remake of “Here We Are,” and four entirely new songs. Her inspiration for the album came from a shared heritage with Brazil.

“The Yoruba tribe of Africa went both to Cuba and to Brazil, and because of the European influences in each place, the music that came out of it was different,” she told THR. “If I’d been born in Brazil, conga is now samba.”

Because a lot of Estefan’s fans are older, she said they have indoctrinated their children to be devotees, so she has a lot of young fans as well, which she hopes to continue to inspire through her achievements.

Not only is it important to the honorees that they continue to inspire generations to come, but also not to take NYWIFT’s recognition for granted.

“We need to all take action. We can’t sit idly by,” Rosenthal said. “There’s not one of us that can sit and pat ourselves on the back and say, ‘Job well done,’ and take a nap. You can take a breath, but we’ve got to keep moving.”