There is no shortage of leotards (or female fighters) on Netflix’s GLOW, out today.

The comedy series, starring Alison Brie, is inspired by the professional women’s wrestling TV series of the same name that ran from 1986 to 1989. Brie stars as Ruth Wilder, a struggling actress who finds her last chance at stardom when she auditions for the first-ever women’s wrestling TV show.

Ruth, as well as her fellow wrestlers, are struggling to make ends meet, so her wardrobe is far from glamorous. Costume designer Beth Morgan tells The Hollywood Reporter, “Clothes are not at the top of her list of concerns. She’s more worried about research, her scene study, working hard to get to the next level.”

Morgan, who previously worked on The Last Man on Earth and Key and Peele, shares her research process (awkward family photos were involved), her go-to vintage stores in L.A. and why a Bob Mackie dress makes an appearance in the series.

Where did you start with your research?

Luckily there’s so much great research online, and I went to one of the costume houses out here, Western Costume, that had a beautiful research library and looked at old catalogs, like the JCPenney catalog, dating back to the late ‘70s to mid-’80s, because even though we’re in ’85 in L.A., our girls don’t have a lot of means. A lot of the girls I wanted to be more grounded and have pieces that they would have had for years, so we did a lot of research with family photos.

We had people from the cast send in family photos. Jenji Kohan was in L.A. in the ‘80s, so she was a fountain of memories. On top of that, I watched some of the original GLOW and a lot of Cheers, actually. For me, it’s not about the glamour for these girls. They’re gritty, working-class women, so it’s the everyday look, not the glossy Vogue look. The catalogs were really helpful, and so were the awkward family photos I would find online.

How Alison Brie Got in Fighting Shape for Netflix's 'Glow'

How did you approach Alison Brie’s character, Ruth?

Ali is very grounded in character as well, so the collaboration with her was so amazing — there was no vanity to it. It was more, “Who is Ruth? What would she wear?” That was a great starting point for us — what’s the grit of Ruth? She can’t even pay her bills. She’s not buying anything new. It’s like, what are these things that maybe she bought in Omaha? What did Debbie [played by Betty Gilpin] get rid of and give her?

If she was buying things, what would she identify with? She would go for the soft pastels and earth tones. I really wanted her to have a journey. … In the episodes, she’s the villain. You want to see the soft side of Ruth because she is such a hardworking, determined person. She’s having a really hard time bonding with these women. She wears a dress halfway through that’s this beautiful soft yellow, but then we put a braided brown-leather belt on. She has a masculinity to her in a way that she wants to be seen and heard and feel like she has a voice to make a difference. In this time period, where everyone’s just reading for the secretary, she wants to be more.

Clothes are not at the top of her list of concerns. She’s more worried about research, her scene study, working hard to get to the next level. We thought, “How many pairs of jeans would Ruth really own? One or two.” She has two pairs, but she wears almost one the whole time. She would just have the white socks that you would get at Kmart. Functionality is more important than glamour for Ruth. 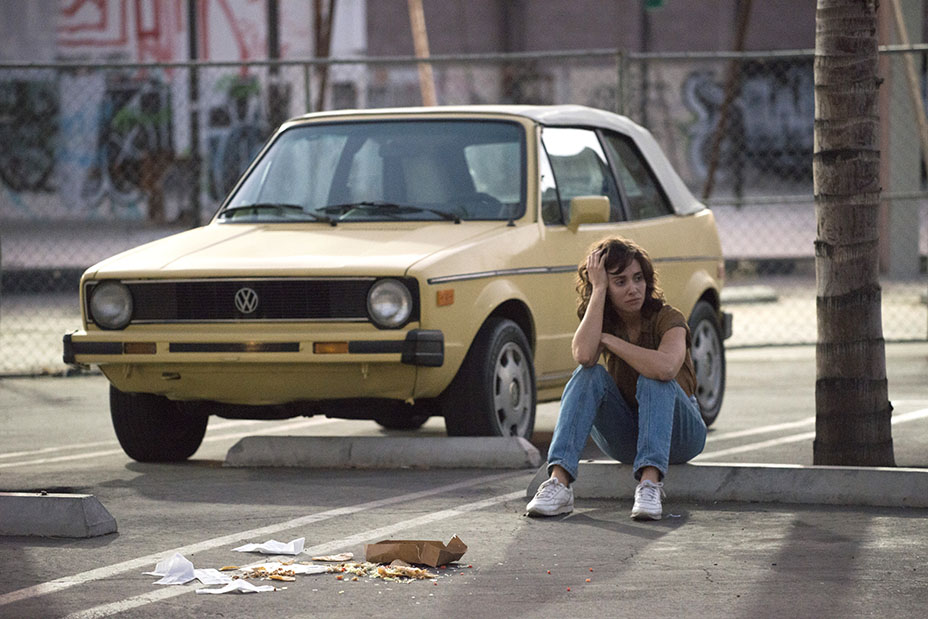 Where did you find Ruth’s wardrobe? What did you design?

A lot of the leotards we had custom-made for her because the ‘80s is such an interesting time for fabric, so I wanted her to feel heavy and be in certain color palettes. A lot of her clothes were from vintage stores, costume houses and vintage dealers that would send me things to look through. We were able to just find the perfect pieces for her that I felt were just calling her name. That Escada mint suit that she wears in the opening is from my favorite vintage store, Recess, on La Brea. It was scripted that it was a black-and-white power suit, and I saw this mint suit, and I thought, “Oh, no.” Even when we first tried it on, nobody was convinced. I was like, “This is our minty dream.” For the pilot, I wanted to do a dusty pastel palette, so when we get to that fantasy sequence at the end, that’s when we pop the color.

Ruth has a tiny apartment and half a rack of clothes, so she does a lot of repeating. Especially when they move into the GLOW-Tel, her concern isn’t, “What am I going to wear?” It’s more, “What do I need to accomplish to be the best in this role?” 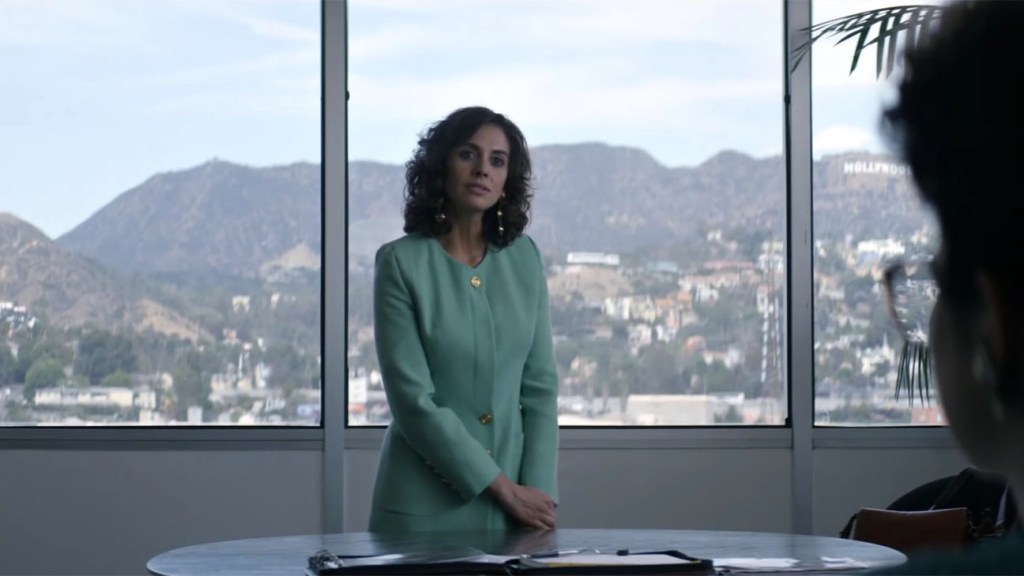 When Ruth goes in for her audition, she’s seen wearing a long denim pencil skirt and has trouble climbing up the bleachers. Was that intentional to show her as someone who is struggling?

No, but as soon as it happened, I told Ali, “This is brilliant.” I don’t know if the director gave her direction or if it was natural because the skirt just made her do that, but it was not the intention when we picked the outfit.

It’s interesting because before the camera test, we had another outfit picked for that scene that was more in the dusty pastels that we were doing, but it just felt too dressy for her. 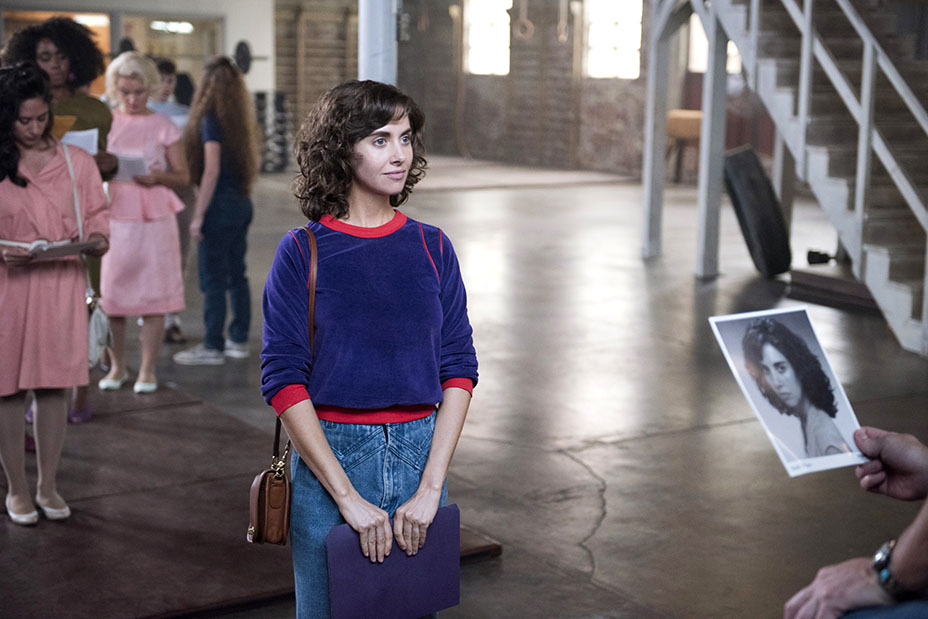 How did you come up with that outfit she wears when she steps back on set after getting cut?

It’s in the script, that montage, that she put together an old leotard. We were like, “What would she have in her house, and why would she make those choices?” She’s watching a bunch of wrestlers and they have belts, so she goes into her closet and looks at what she can use. She sees that the macho man is always wearing a great cape, so we looked at what she could use to give that great sense of entrance. She has a shoelace tied around her head. She cuts the fingers off her dish gloves in the montage scene. She doesn’t have wrestling boots, but she has those really cool white boots with engraved bullets, so she’s putting all these pieces together to make it work. The leotard she wears is actually the leotard she wears earlier in the episode for Jazzercise. She doesn’t necessarily have a full plan for what she’s going to do when she shows up. 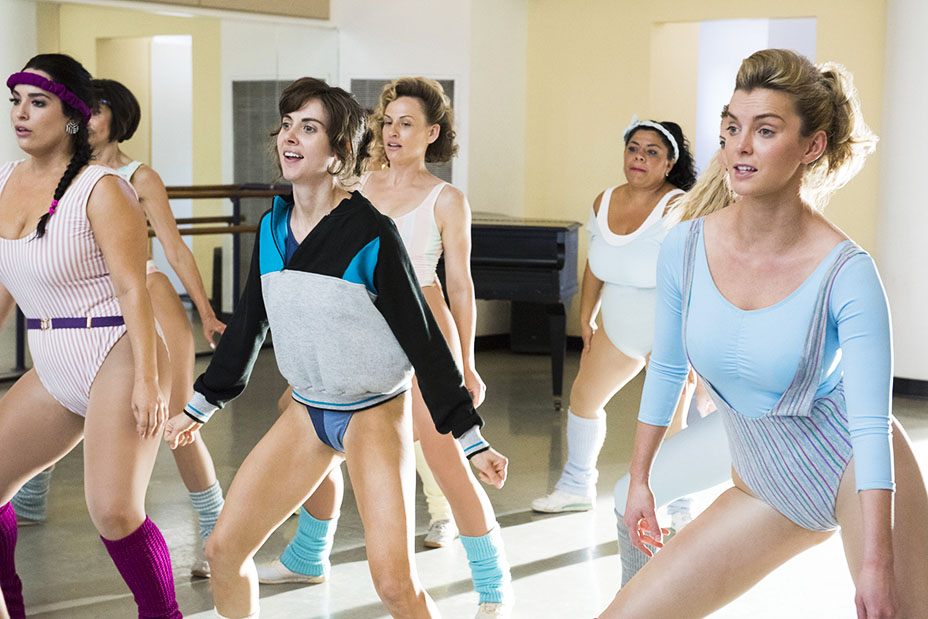 In addition to Recess, where else did you shop for vintage clothes?

There’s a store — they moved to Beverly — that’s called The Kit Vintage and The Way We Wore, which is also on La Brea. All the thrift stores. There’s also a place in Long Beach that’s called Meow, where we got some stuff from. For those leotards, a lot of them were found online — they’re so hard to find because they wear out. These were the yoga pants of the ‘80s. People wore them all the time. The elastic on all of them were totally stretched out. Catwalk is another vintage store I went to on Fairfax — one of the girls who works there used to be an aerobics instructor, so we bought some original pieces that she had from being an instructor. We ended up making a lot of the leotards. It was a fun hunt for sure.

There’s a moment in the series where one of the wrestlers points out a Bob Mackie dress — was it actually a design by him?

It was a Bob Mackie piece. He’s the reason I wanted to be a costume designer, so I was more than happy to showcase his work. He is so prolific in his designs. That was already in the script. There was talks about changing it, but I was like, “You are not changing Bob Mackie.” We reached out to his archives, which were being moved to New York at the time, so we just bought a Bob Mackie dress from one of our vintage dealers. 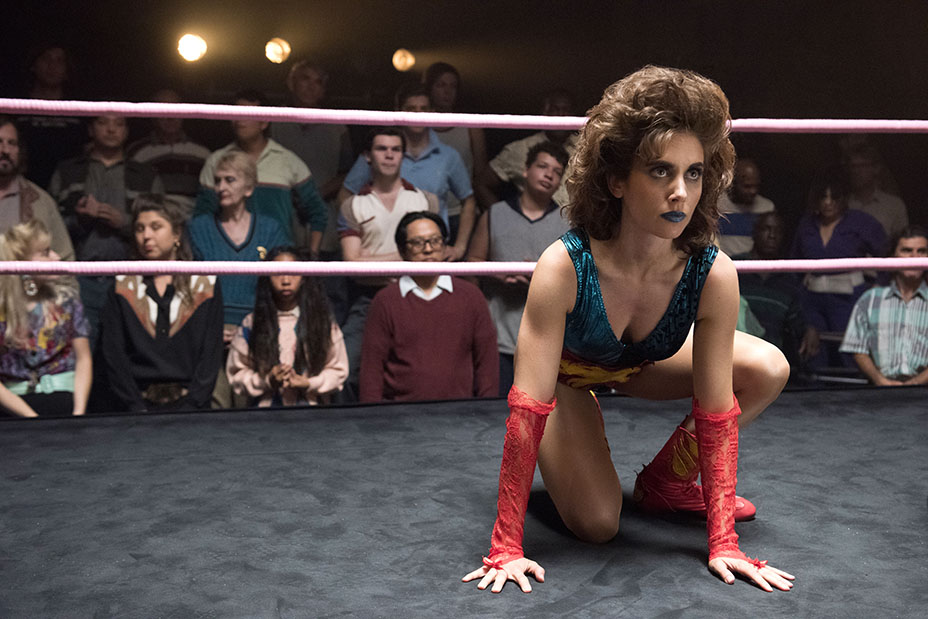 Tell me about the bedazzled leotards that we see both Alison and Betty’s characters wear at the end of episode one.

There’s two different looks — there’s a fantasy look at the end of the first episode, which is a nod to where we’re going to go for episode 10. For episode 10, by the time they get to their wrestling looks, it’s a really grassroots process for them. They don’t have any money for the show, so it’s about really about who can pull what resources. It had to feel realistic, like they made it.

Debbie has more of an income source than some of the other girls, so it felt right that hers would be the most fabulous and that Ruth would be the most grounded in story. Ruth researches what a Russian soldier wears, so her leotard has a banded collar. Debbie is in more sparkle. It came down to their characters and how it lends to the story.

The fantasy look was, what would Sam [played by Marc Maron] picture? What would a man’s perspective of watching two women have a super-emotional fight over real issues of tearing a family apart. The leotards are really tight, really shiny and really sexy. The glitter is more in the fabric there than added on top. Knowing what he knows about wrestling, it was him imagining what he could bring to GLOW. There’s real juxtaposition about what he envisioned GLOW to be and what it turns out to be when women are involved.