For years, NBC executives have tried to recruit Jimmy Fallon to host the Golden Globes, and for years, he has turned them down. But on Jan. 8, the Tonight Show host finally will take The Beverly Hilton stage as emcee of the 74th annual awards. And much to the delight of the Hollywood Foreign Press Association, Fallon, 42, will bring the fanboy enthusiasm that defines his late-show persona — a major departure from the naughty shtick of a predecessor, Ricky Gervais. There will be jabs — he’s looking at you, Trump — but Fallon promises they’ll all be in good fun. “The night should feel like a big party,” he told THR in December, as he prepares for a show that, he hints, will include many of his famous pals.

NBC entertainment chairman Bob Greenblatt has said he’d been asking you to host the Globes for years. Why the hesitation until now?

I wanted to just focus on getting The Tonight Show off the ground and making that work. That’s my job in the first place, and I just want to make sure I have a job. (Laughs.) But I kind of know what I’m doing now, and I thought this would be the perfect year. TV has been on fire, so I was looking forward to it being a great TV season, but you never know about the movies, and I lucked out, because the movie season turned out to be fantastic as well.

Amy Poehler and Tina Fey created a Globes drinking game, which included such rules as “Drink anytime someone says, ‘I didn’t prepare anything.'” What are your rules this year?

I think I’ll let them have the drinking game bit, but I’m sure you’ll see a lot of people like, “I didn’t prepare anything …” and all that. Which is interesting because there are so many more awards shows than there used to be, so it’s like, “You can’t say that anymore. You should be prepared.” I’d be prepared! You have a one in five chance of winning — as opposed to zero in five. Prepare something!

The Stallone Daughters and Other Secrets of Miss Golden Globe: Past Honorees Tell All

Which of your Tonight Show bits best lends itself to an awards show with an open bar?

Most of them do! But we’re not going to bring any of those to this, I don’t think, because there’s not much time for me at the Globes. The host is more like an introducer.

It’s a three-hour telecast. What do you see as the appropriate or ideal amount of time a host should spend onstage?

The Globes host traditionally skewers, but you’ve got that Mr. Nice Guy shtick.

If I hit somebody, it’s a very subtle hit, and everyone’s in on the joke. I want to make sure everyone’s laughing and having a good time. And I’m hopefully going to book the people in this crowd the next week, so I’ll be edgy, but it’s all in good fun, and I know how far I can take it.

So nobody in that room should be nervous?

No, not this year. This should be a party.

Should we expect Trump jokes from you?

Yeah. The whole night won’t focus on that, but it will be a week before the inauguration, so it will be on everyone’s mind. … It’s the first and maybe the last party that we’ll have in 2017. 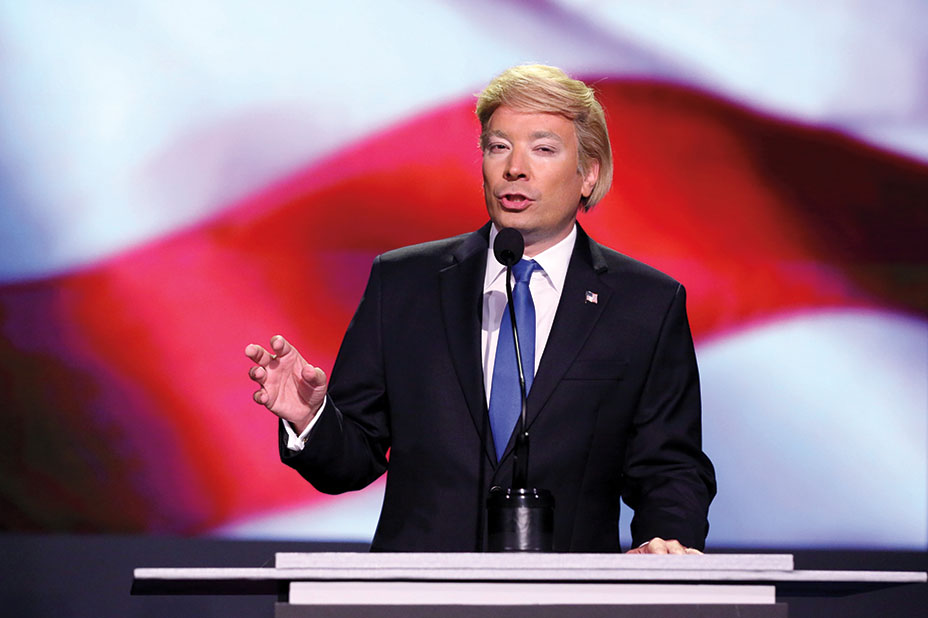 Have you watched any of your screeners? Rooting for anyone?

It would be fun to see Winona Ryder back [for Stranger Things]. And I liked La La Land, the music part obviously lends itself to me and my talents and something I can do there. From that to Westworld, I think it’s going to be different from other award shows in that it’s young and energetic. It’s almost like a mixtape, if you will, of awards shows: the best of movies and the best of TV and great musicians in one show.

Your pal Justin Timberlake is nominated. Have there been discussions about a collaboration?

He was? Whaaaat? I’ve got to send him something. Does he drink champagne? Oh my goodness …

So are you two working on something?

I don’t want to give anything away. … I want to have fun with as many people as I possibly can, but I’d like everyone to be a little surprised going in. We’ll try to be clever. And I think you’ll see a lot of my friends.

Your Emmys hosting was memorable for the big musical numbers, but The Beverly Hilton doesn’t really have a big stage. How do you incorporate performance into the show?

Oh it’s a tiny, tiny stage. But you’ve got to tune in to see. We’ll think of something fun. I like having problems like that to solve. I learned a lot from Lorne [Michaels] on Saturday Night Live, where you go, “Oh, yeah, yeah, yeah, there are ways around all of this stuff.”

Stallone Daughters on Miss Golden Globe Gig: "This Is Our Moment"

What’s the biggest differences between hosting the Globes and the Oscars? And would you agree, if asked in the future, to host the Oscars, too?

TV adds a whole other element to the Globes, so if you haven’t seen the movies, you go, “Well at least I know Game of Thrones is coming up.” There are familiar faces every two seconds, so it’s not like you’ll be out of the loop.

So if asked would you want to host the Oscars?

I think it’s more of an ABC thing than an NBC thing, so I don’t know if that’s on my radar. But if Kimmel did what he did for the Emmys, he’ll be fantastic. He was such a good host. It was funny and smart, and the whole thing moved.

What advice have you gotten from Amy, Tina or Ricky about hosting?

They’re like, “Please, you host a show five nights a week. If you haven’t figured it out by now, I don’t know what to tell you, buddy.”