Just ask any schoolgirl: If there’s one thing that can level the fashion playing field, it’s a uniform. And that’s what Hollywood was asked to wear to the Golden Globes on Sunday night to show solidarity with the Time’s Up initiative to promote gender equality. Except that the all-black dress code ended up being anything but uniform. Instead, it was couture with conviction.

From a fashion perspective, the palette was refreshing, putting an emphasis on silhouette and sumptuous details. It didn’t look like a funeral, but a celebration of individual style gestures and the power of accessories, from Greta Gerwig’s vintage 1980 Tiffany & Co. collar, worn with a superbly sculpted one-shoulder black velvet Oscar de la Renta gown, to Zoe Kravitz’s show-stopping Lorraine Schwartz emerald earrings, worn with her Saint Laurent column dress. 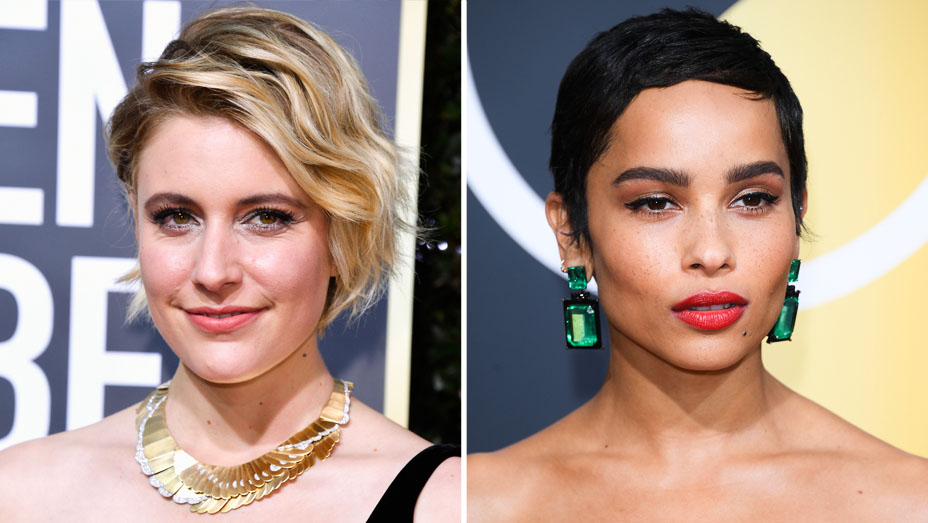 Although it was a bad night for designers looking to have their names dropped on the red carpet (even as an embarrassing “glambot” looked on, E! red-carpet reporters asked “Why are you wearing black?” rather than “What are you wearing?”), actresses were able to communicate something else: the idea that fashion can tell a story.

The move to convey women’s empowerment through clothing followed protests on the fashion runways and in the streets beginning with 2017’s monumental Women’s March. And several brands who dressed people for the red carpet did their part, including Calvin Klein and Prabal Gurung, who announced they were making donations to the Time’s Up legal defense fund. Allison Janney said she chose her Mario Dice butterfly cutout gown because the designer agreed to donate to the group. 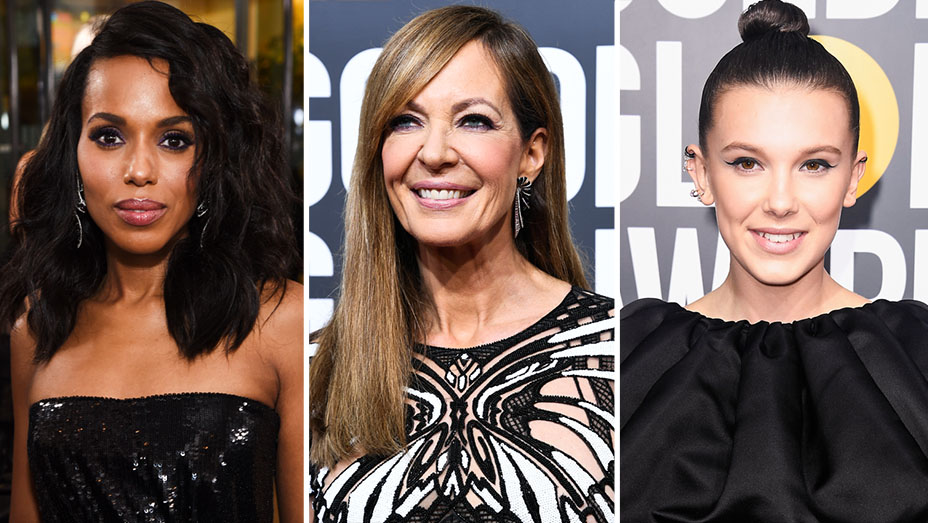 Meryl Streep (in custom, tuxedo-inspired off-shoulder gown by Vera Wang), Shailene Woodley (in a houndstooth check turtleneck and ball skirt by Ralph Lauren), Laura Dern (in an embroidered Armani Prive) and more walked alongside racial justice, farm and restaurant worker activists including the mother of the #MeToo movement, Tarana Burke, challenging the idea that the red carpet is only about female appearance and instead using it as a platform to talk about women from all walks of life making change. 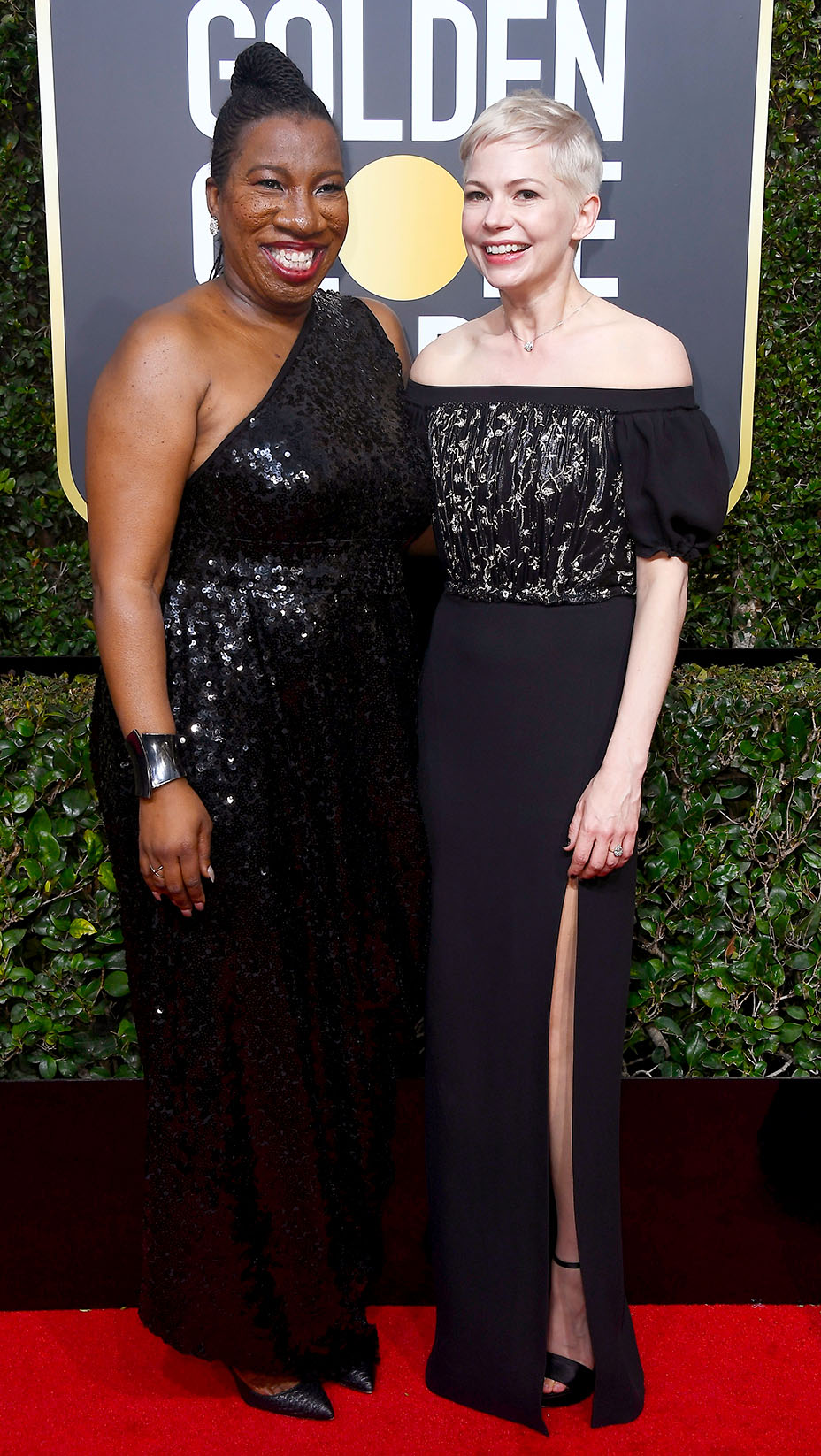 They looked great doing it — and it does not diminish them to say that, because Hollywood, like fashion, is an industry built on image and desire, and the designers who made these all-black gowns and suits as a visual reminder that it is not business as usual in any industry deserve to be recognized for their (largely last-minute) work as well. Let’s hope they do get recognized and their names shared once again in the future, along with both actresses’ and actors’ convictions for change. 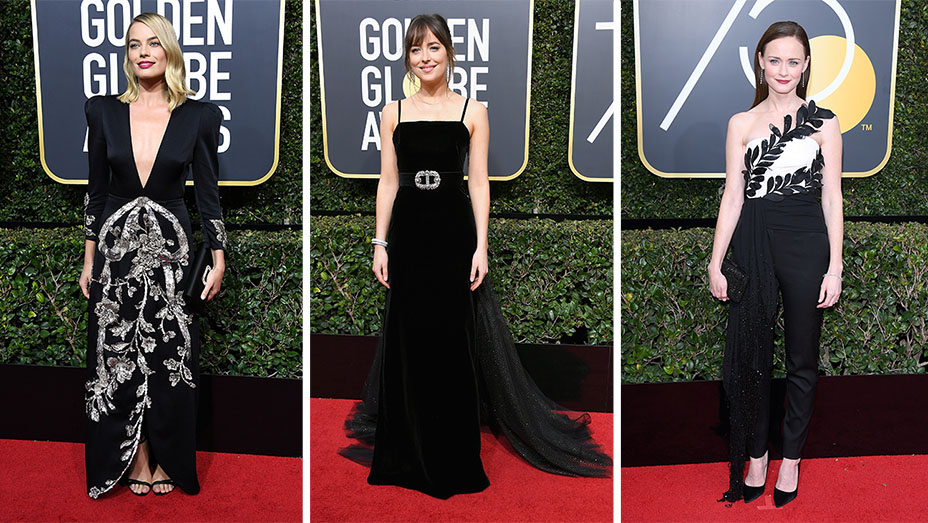 But so did romantic gowns, including Emma Stone’s Louis Vuitton asymmetrical lace confection embroidered with black pearls, crystals and sequins and Nicole Kidman’s Givenchy 3D Chantilly lace “Moth” gown embroidered with tone-on-tone sequins. From Gucci, there were two standouts: Dakota Johnson’s velvet skinny strap gown with a crystal embroidered bow on the train and Margot Robbie’s with a bow on the front. Jennifer Aniston’s Schiaparelli fit her like a glove, and Rachel Brosnahan’s Vionnet gown was an Old Hollywood dream, much like her Golden Globe-winning show The Marvelous Mrs. Maisel.

Millie Bobby Brown’s short Calvin Klein flounce dress was buoyant and fun, and Saoirse Ronan’s Versace gown was futuristic and daring, with a single sleeve and silver accents that shone like thunderbolts when she accepted her best actress Globe. Just the thing for Hollywood’s new superheroes.