Mike Schur says he’ll miss going to the Emmys this year, but the creator and showrunner of best comedy nominee The Good Place looks at the awards more as a barometer of the industry’s collective taste than a big party.

“I’m interested to see what the collection of thousands of people who work in the industry feel is the best work. I disagree with a lot, and I agree with it sometimes, so when you take it that way, it doesn’t really matter to me if it’s in person or over Zoom or whatever,” Schur tells THR. “To me, it’s a kind of check-in of, ‘What did everyone like this year? What did everyone think was worthy of a gold star?’ So it’s a little bit of a bummer that you can’t get all dressed up and go have a big party, but I always think of it as more of you’re licking your finger and holding it up to see which way the wind is blowing in terms of people’s taste and what they thought was good the past 12 months.”

'Field of Dreams' Peacock Series to Film in Iowa (Exclusive)

Schur spoke to THR about the six Emmy noms for the final season of NBC’s The Good Place, the projects he’s working on now and his desire to get back inside a physical writers room.

Was it nice to see other Good Place actors besides Ted Danson get recognized this year?

That was honestly the thing I was happiest about, to have watched Will [Jackson Harper, for playing neurotic Chidi] and D’Arcy [Carden, as Janet] do such good work for so long. And it’s that weird thing where they were previously in the conversation about things like Emmy nominations, but they never seemed to get over whatever that magic hump is. That was really lovely and well deserved. I personally still think Kristen [Bell, as initially morally challenged Eleanor] was criminally overlooked for four years, but I’m biased, I guess. But I was really happy for Will and D’Arcy. That was a nice and unexpected twist in the whole thing.

And you’re sort of carrying the flag for broadcast TV in the comedy series category.

Yeah, I guess so. It’s sad, you know — the world has changed so much. It used to be the headline was HBO blows everybody out of the water. Now it’s Netflix blows everybody out of the water, but the “everybody” they’re talking about isn’t the networks. It’s HBO and FX and Amazon and Hulu. It’s just the way things have gone, and the amount of material they’re putting out is just so enormous, and the amount of good material is enormous. It’s not like it’s not deserved, it’s just a sea change from where the landscape was when I started.

But it does kind of bum me out, because I’m a defender of network TV. I like network TV. It’s now just such an uneven playing field. When it comes to things like the Emmys, the presentation matters so much. And the presentation of shows at places like Netflix and Hulu and HBO is just so much better — there are no commercials and it’s glossier and you can swear and do all those things. It’s a steep uphill battle for the networks to compete at the level of awards presentations. 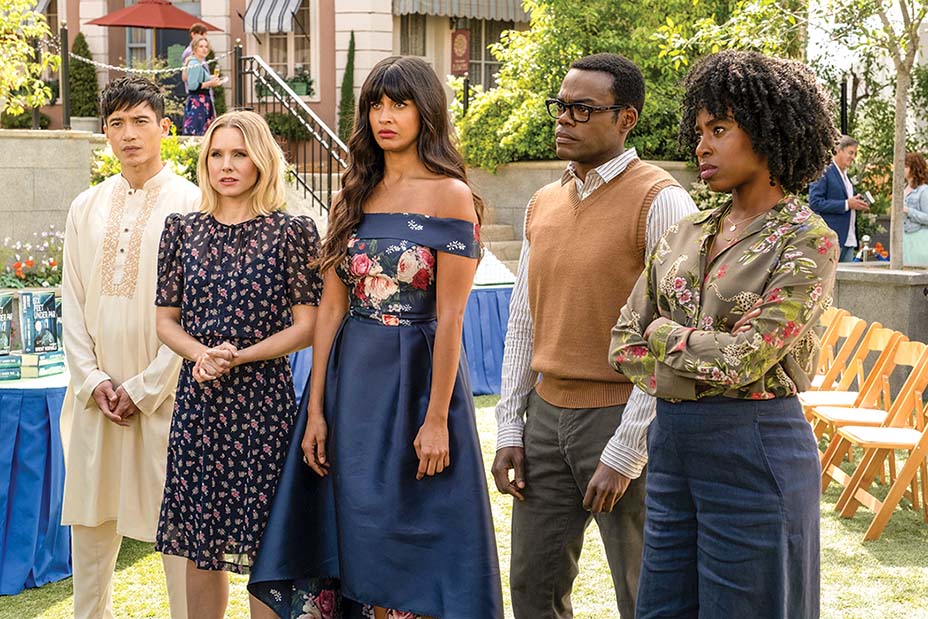 With the shows you’re working on now, how are you feeling about where things stand in terms of being ready to go back onto stages and into writers rooms?

It’s a good question, and the answer is nobody knows. This show I’m making [for Peacock] with Ed Helms and Sierra Ornelas called Rutherford Falls, we were in the production meeting for the pilot when everything got shut down. We were on the verge of shooting it. It’s been almost five months, and we’re gearing back up again and preparing to shoot next month, but it’s just a lot of unknowns. How fast we can go determines how long the scripts can be and how safe is everybody, which is the only thing anybody really cares about. There’s a real concern.

And to their credit, the studios and the lots and the networks are taking this extraordinarily seriously. Nobody is saying, “Don’t worry, it’s fine. Come on back.” Everybody is working around the clock to try to determine safe protocols for people. But then you look at something like my beloved Major League Baseball, and you see what happens when there’s one bit of careless behavior from one small group of people. The whole league is in danger of shutting down again. It’s going to be a really interesting experiment, because I don’t think anybody is unaware of the dangers or the ways things can go awry. 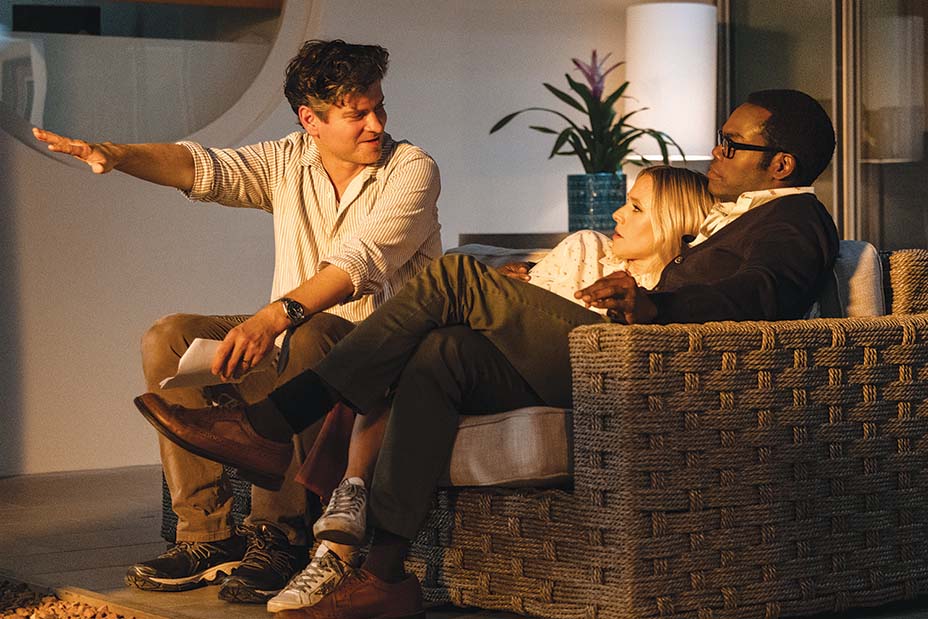 Has the storytelling on any of your shows changed because of the pandemic or other recent events? I would think Brooklyn Nine-Nine in particular might be affected.

Certainly — I think everything does to some extent. Brooklyn is really Dan Goor’s show and has been for a long time, but we’ve had a number of conversations over the past six or eight weeks about the show and how it’s going to address Black Lives Matter and the overall social justice and racial justice issues facing the country right now, especially in relation to police brutality and police justice. So in addition to navigating the COVID era, they have a whole slew of separate issues to tackle.

That show happens to be police officers in New York, but I think every show has to deal with this in some way. Nobody can just straight up ignore the most gigantic thing the country is reckoning with right now. In one way or another, everybody has to deal with that issue. Rutherford Falls has its own very specific set of social and racial justice issues it’s dealing with, so we’ve had conversations about Black Lives Matter within that context. Every show will have a different angle on it.

How has the shutdown affected your creative process and working with people?

We’re finding our way. We had to adjust very quickly — we were in the middle of writing a bunch of stuff and had to shift to doing that remotely. It’s not impossible. You can do rewrites and share your screen with everybody on a Zoom call, so it’s possible. It’s not good. It’s not nearly as good as the old way, and that’s what worries me a little bit. I’ll speak only for comedy writing, but you just kind of have to be in the same place. You need to trap people’s creative energy in a room, and you need to boil it there in order to create what you need to create for a comedy show.

If any broadcast show can manage a series win at the Emmys (and after a six-year drought, no less, since Modern Family won), it would be Mike Schur’s existential meditation on morality. Well, it would have to be. As the only Big Four show in either the comedy or drama race, the NBC program improved its Emmy showing for this fourth and final season after only one previous best comedy nomination and a few years of ignoring everyone but star Ted Danson and recurring guest Maya Rudolph. However, pulling out a victory in the main race would require a groundswell of affection for the show that it seems unlikely to muster. Critics have always been sold on The Good Place. For some reason, Emmy voters haven’t been. — MICHAEL O’CONNELL 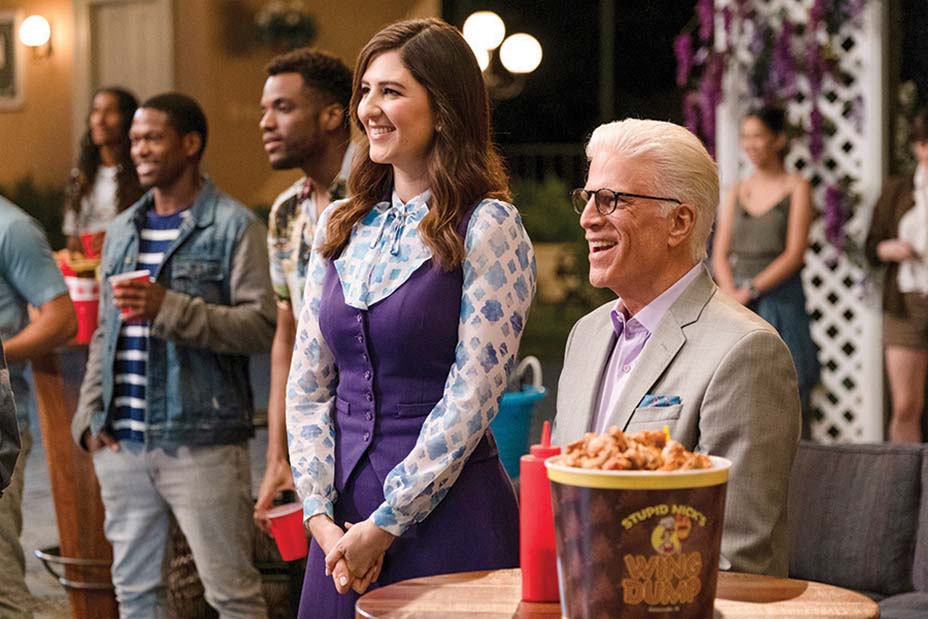 “With the finale, it wasn’t so much about achieving happiness in a preordained couple [as soul mates] and more about finding happiness through any variety of means — self-improvement, altruism, travel, garbage books, whatever — and being able to share it until you didn’t want to anymore and being cool with that. It was half-Cheers finale — with the Good Place as the bar they were leaving one at a time before turning off the lights — and half an inversion of No Exit, only heaven is other people instead of hell? And heaven isn’t other people forever, just other people for as long as you want them?” — DANIEL FIENBERG, JAN. 31