The comedy series category’s lone broadcast nominee boasts a high concept that would raise eyebrows even at a cable network or streamer — a group of misfits (played by Kristen Bell, Ted Danson, William Jackson Harper, Jameela Jamil and Manny Jacinto) grapple with moral philosophy and metaphysics in the afterlife — and yet finds itself oddly resonant in the national discourse (the Peabody Awards honored it as “our favorite contemporary morality play” earlier this year).

Creator and executive producer Michael Schur, 43, took a break from directing the series finale in Los Angeles to talk about the NBC show’s accidental timeliness, the surprising ways it’s been received (it earned five nominations this year, including its first series nom) and his decision to end it all after the fourth season.

Has the story ever evolved to reflect your response to current events?

The show was conceived of and began production in a pre-November 2016 world. Our season one finale, which had the big reveal that they were in the Bad Place, aired the night before the inauguration. It seemed like the whole thing was real-time running commentary. But I don’t think anything changed internally. This is always what we wanted to do and say. Then the world changed, and it maybe gives the show a different feeling as you watch it. I certainly didn’t expect, when we started making a show about moral philosophy, that the idea of ethical behavior would be so prominent in the national discussion.

How does it feel for the show to get its first series nom as it’s wrapping up?

It’s the best [category] because it’s an award that everybody gets to share in. There isn’t an Emmy for writing staff, which is crazy, but it was very nice that Josh Siegal and Dylan Morgan got nominated for writing the “Janet(s)” episode because that was a really, really hard thing to do.

How did D’Arcy Carden pull off playing her character Janet’s version of most of the main characters?

That was a crazy thing to pitch and to write and execute, but I never felt the slightest bit of concern, because I know how good she is. She became like Jane Goodall, taking notes and observing her castmates. She has a line as Eleanor (Kristen Bell) where she says, “I get it.” Kristen, because she’s from Michigan, says the word like “git.” It’s this minuscule observation, and of course she did it exactly the way she should, because she worked harder than anyone’s ever worked. 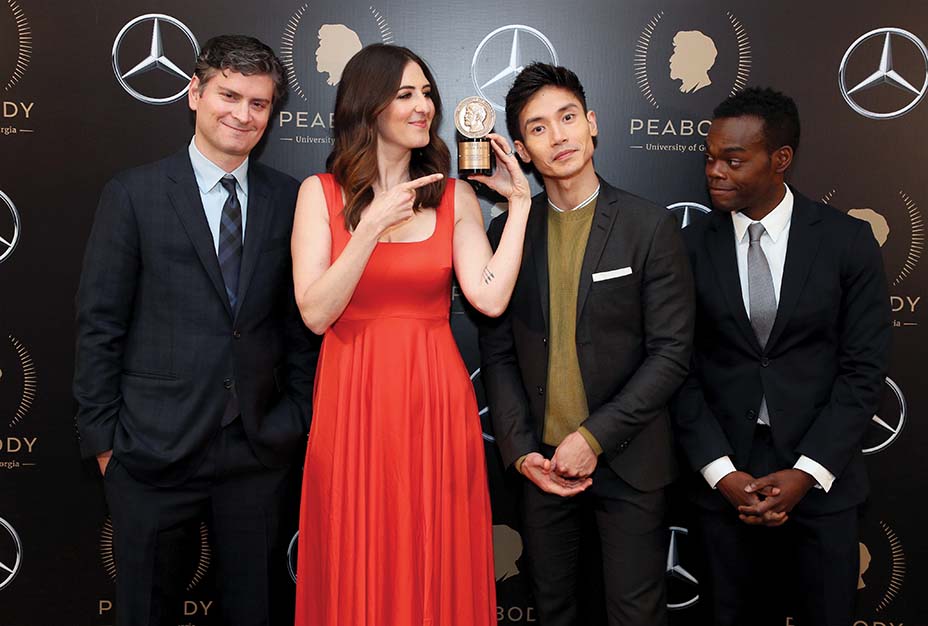 This season, Michael discovered that no one can get into the Good Place because the world has gotten too complex. Is that how you see the world — nobody is truly pure?

That came from intense discussions in the writers room about how the world operates. There are aspects of daily life, especially in a Western industrialized nation, that make it so that you cannot function without running afoul of some moral code. The cars you drive, the cellphones you use, the food you eat or the simple act of turning on your television, everything is so interconnected that no matter how hard you try, you’re doomed. The show’s position, which is I guess mine, is that if you try to be a good person all the time, you’re going to fail. But when there is a chance for you to make a slightly better decision, then you should do it. I don’t know if this is the best answer, but it’s the best one we can come up with as a show. That’s what our characters will continue to do in the last season: All that is required of you is to recognize when you can make a decision that’s better, and try to make that decision instead. That’s the best we can do.

It’s such a rarity on TV nowadays to get to end a story on your own terms. Any temptation to extend it?

It’s an incredible luxury. So often shows don’t end when they should or want to. Sometimes in great success, there’s a massive incentive to draw things out as long as you can. Everyone knows exactly how lucky he or she is, and so everybody wants to keep going. Believe me, there have been a lot of moments where we were like, “Let’s keep coming up with reasons for them to have their memories erased and go back to Earth or Mars or something, and we could just hang out with each other for the rest of time.”

What’s your favorite meme that has come out of the show?

Anytime I’m out with Manny [Jacinto], people yell “Bortles” at him, which is pretty wild. [Jacinto’s character is the world’s biggest fan of then-Jacksonville Jaguars quarterback Blake Bortles.] I love how much Janet there is. The GIF of her giving two thumbs up always makes me smile. Eleanor saying, “This is the Bad Place,” as shorthand for “everything is terrible” is pretty good. The cast is very GIF-able, and it’s always enjoyable any time they pop up on a Twitter feed.

As broadcast’s presence on the Emmy stage shrinks, The Good Place scored a coup in landing the Big Four’s only best comedy nomination — and for its third season at that. In its favor is the populist momentum that comes with airing Thursdays on NBC. (Read: A lot of Emmy voters probably watch.) Against it is the fact that even Emmy icon (and lead comedy actor nominee) Ted Danson hasn’t managed a win for this series yet. And that’s not because it doesn’t deserve the same accolades as Veep or The Marvelous Mrs. Maisel. The truth is, a broadcast show hasn’t won since the Modern Family streak ended in 2015 — so the tide just isn’t with this series. —Michael O’Connell

From Aristotle to Kant, pioneering thinkers and their classic works have been integral to the NBC series since its start.

In a key scene, Michael (Ted Danson) references this father of existentialism to send a hidden message to the humans that they should have faith in him.

GROUNDWORK OF THE METAPHYSICS OF MORALS
BY IMMANUEL KANT

The German philosopher’s work has been featured in the show since season one. William Jackson Harper’s Chidi, a staunch Kantian, firmly believes it’s immoral to lie.

THE NICOMACHEAN ETHICS
BY ARISTOTLE

“Who died and left Aristotle in charge of ethics?” jokes Eleanor (Kristen Bell), to which Chidi (who’s teaching her about philosophy) quips, “Plato!”

NO EXIT
BY JEAN-PAUL SARTRE

The 1944 existentialist French play famously concludes “Hell is other people,” which has a very clear connection to the reveal at the end of season one.

A TREATISE OF HUMAN NATURE
BY DAVID HUME

Chidi’s lessons start off with this classic from the Scottish philosopher, an influential work that tries to apply scientific methods of observation to a study of human nature.

WHAT WE OWE TO EACH OTHER
BY T.M. SCANLON

The show doesn’t just stick to the classics — Scanlon, a contemporary philosopher and professor emeritus at Harvard, explores contractualism in his 1998 work.