It’s beginning to look a lot like Christmas … which means it’s time for Boom! Studios’ Klaus to return once again. The character, from Grant Morrison and artist Dan Mora, is a retooling of the Santa Claus myth that borrows from tradition and contemporary pop culture to create a figure who’s as much superhero as jolly old bearded man who likes to give presents to kids.

This year’s Klaus and the Crisis in Xmasville is the third project featuring the character, taking place in the 1980s and bringing him up against Pola Cola, a corporation that wants to give Christmas a makeover that will result in more profits and a Santa totally under their control. The cost? Oh, merely the souls of a few children. (As you might imagine, Klaus isn’t particularly excited by this idea.)

Heat Vision spoke to Morrison about the origins of Klaus, and just how real Santa Claus is, anyway.

Klaus and the Crisis in Xmasville is your third story with Dan dealing with Santa Klaus, following the 2015 miniseries and last year’s Klaus and the Witch of Winter special issue. Where did the idea of doing a comic book series about Santa Claus come from, originally?

Honestly, it started as me trying to do a superhero story. I was wrapping up all the DC stuff at the time, but I still liked all the freewheeling, crazy Silver Age-y superhero stories. I thought I could have my own character who’s a bit like Superman, a bit like Doctor Who, particularly, and it seemed like Santa Claus was an obvious one. Everyone recognizes him, he has his look, his sled, everything that we associate with that character and suddenly it seemed like, ‘Well, these are superhero tropes.’

But once I got into it, I realized that there’s much more to be said using a figure like that. Having taken from his origin story — where we see that he’s a solitary, shamanic figure doing his best to help people — and then pushing that character through to the present day, with this new one taking place in the ‘80s, to see how that original impulse has reverberated, and how it’s been taken up, and how people have tried to co-opt it and even pervert it … That seemed to be what the story was, here: How does this figure stand up in the multiplicity of the world we live in, where these ideas can be co-opted and changed so far from what their original creators intended?

The Crisis in Xmasville special reminded me in a strange way of Miracle on 34th Street, which argues that Santa is real because people believe in the idea of him enough. You’re dealing with similar concepts here, especially with the Pola Cola executives who essentially want to kill Klaus and replace him with their own version of Santa — one that keeps the idea alive in theory, but twists it, like you say.

Ideas are open to all kinds of shifts and changes. Ideas are very malleable.

In a way, this goes back to something from your Action Comics run at DC, where Superman had to deal with a perversion of the Superman idea. In that case, as with Crisis in Xmasville, you’re suggesting that some ideas are so strong that they ultimately resist attempts to change their meaning.

I think that’s true, but we should always remember that people did come up with these ideas at the same time. To be able to put ideas so big into the world that they do transcend culture is also something that should be recognized. I remember being a kid when I realized that Santa Claus wasn’t real, and then there was a moment when I was a teenager, sitting in my bedroom and I heard sleigh bells. I’m sure it was just someone outside, but it set me to thinking. That’s when I came to that exact same conclusion [as Miracle on 34th Street]: Santa Claus is real. We all have this mutual agreement to pretend that he’s real, and people dress up as Santa Claus, and he becomes as real as Elvis. I’m not sure how real Elvis is now [laughs], probably more real than Elvis was when he was alive, and I think Santa occupies that same bizarre bracket.

There’s a great moment in the issue where Klaus makes a reference to fighting the Martians at some point in the book, which feels like a reference to Santa Claus Conquers the Martians. It’s a nod that follows up on the Witch of Winter issue and suggests that Klaus is, in part, an attempt to collect all the different versions of Father Christmas and create some kind of unifying theory of Santa.

Yeah, it’s doing the same kind of thing I was trying to do with Superman or Batman, to try and do some kind of fusion of all the stories, and create some version that includes everything. I mean, it’s not possible to do something that includes everything, because some are contradictory. But to try and include everything, I think it’s why I’m so excited to find all these international versions of Santa Claus who wear different clothes and have different names like Grandfather Frost, who’s in the story.

You mentioned Doctor Who earlier, and I wanted to go back to that for a second; Crisis in Xmasville feels very much like a superhero story, right down to the name’s call-out to DC’s Crisis tradition —

— but the story also opens with this creepy moment that feels straight out of a Doctor Who story, with a town filled with Santa drones that end up kidnapping children. It’s almost a statement that Klaus, like Doctor Who, can be the anchor for stories in lots of different genres.

Absolutely, and that was the intent, specifically, with these shorter done-in-one stories. It was very much the Doctor Who Christmas Specials that I was taking as a template.

Changing tack for a second, you talked about being a teenager and deciding Santa was real. I take it that you’re a fan of this time of year, then?

I love Christmas Eve. Christmas Eve’s the best, you know? There’s been such a build up and then, once everyone’s done their shopping and everything goes quiet, there’s a couple of hours that feels almost holy before the telly starts up again in the morning with carols and choirs. There is a moment, in that night — to try and capture that, to me, that’s the essence of Christmas and the essence of this childlike idea of Santa Claus. That moment of anticipation, that moment of waiting. Once the toys turn up, it’s not as good, but the moment of waiting — there comes a point in the middle of the night where there’s no presents on the bed, and you wake up and the presents are all there. It’s trying to capture that, the remainder of what’s left of the magic.

But corporations, they’re trying to make it Christmas every day, they’re trying to literalize the Wizzard song, which would be a nightmare. In the real world, I’m watching that happen now: Black Friday, you don’t get to recover from Thanksgiving, and as if that’s not enough, there’s Cyber Monday. You know they’d try and sell every day between now and Christmas with a shopping fest if they possibly could. And that’s what I’m trying to get in here as well, imaging a corporation that’s actually so greedy and rapacious that they would have Christmas every day, a non-stop consumer frenzy.

This is the second one-shot special issue featuring Klaus. Can you see yourself returning to the character on an annual basis, for specials or even a longer run again?

As much as I’ve enjoyed doing the one-offs, I’ve got to the point now that, because of the nature of the one-offs, there’s not much more I can do. Klaus comes in, he’s the medieval knight, he’s the hero, but I’d like to do a longer one where I can get back into the character and do something with more depth and more scope. I find myself wanting to dig really deep into the character again, and to see how he’s changed and what everything has done to him. You just get him as a surface character in these short stories, he’s just the hero. I’m thinking about that not for next year, but the year after that if we’re all still around to do it. 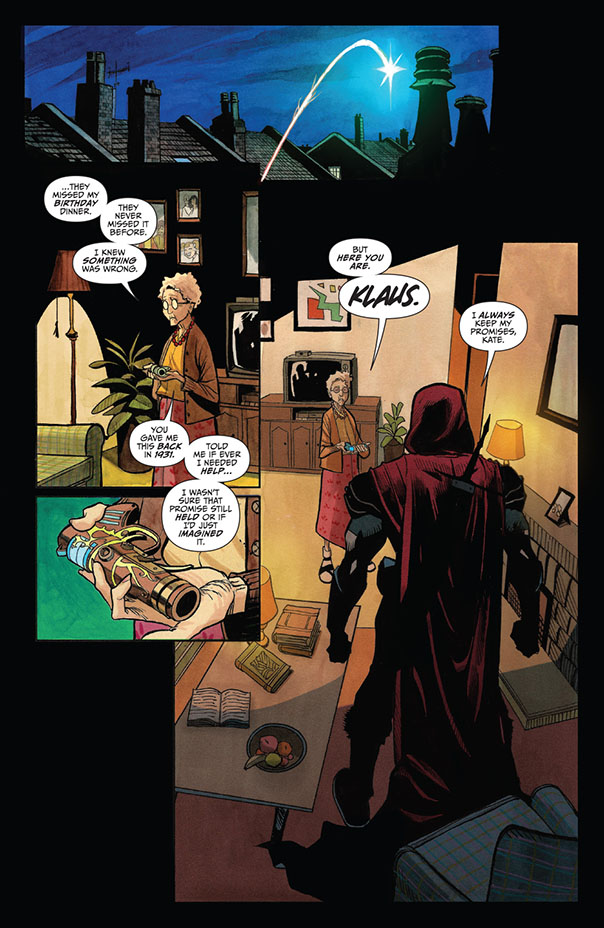 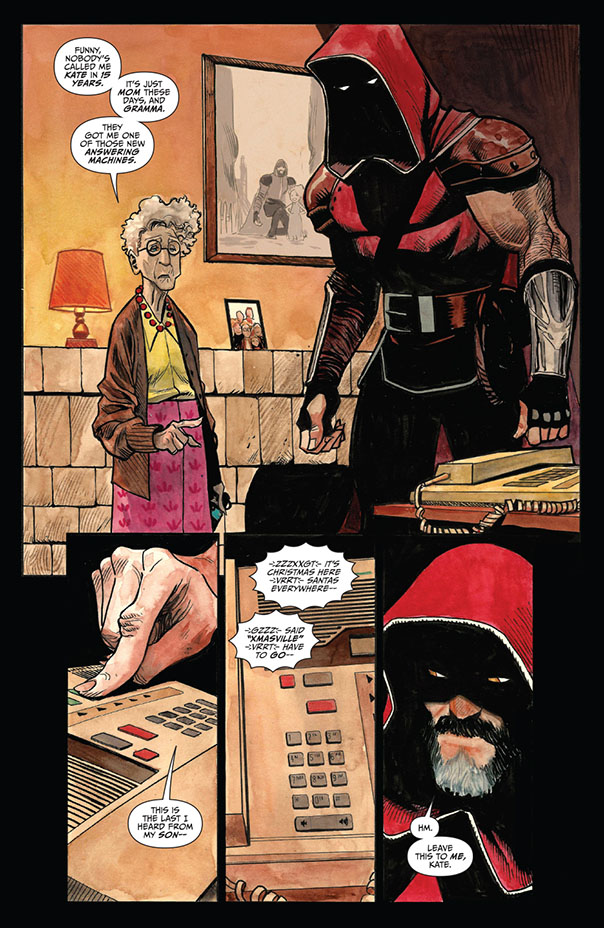 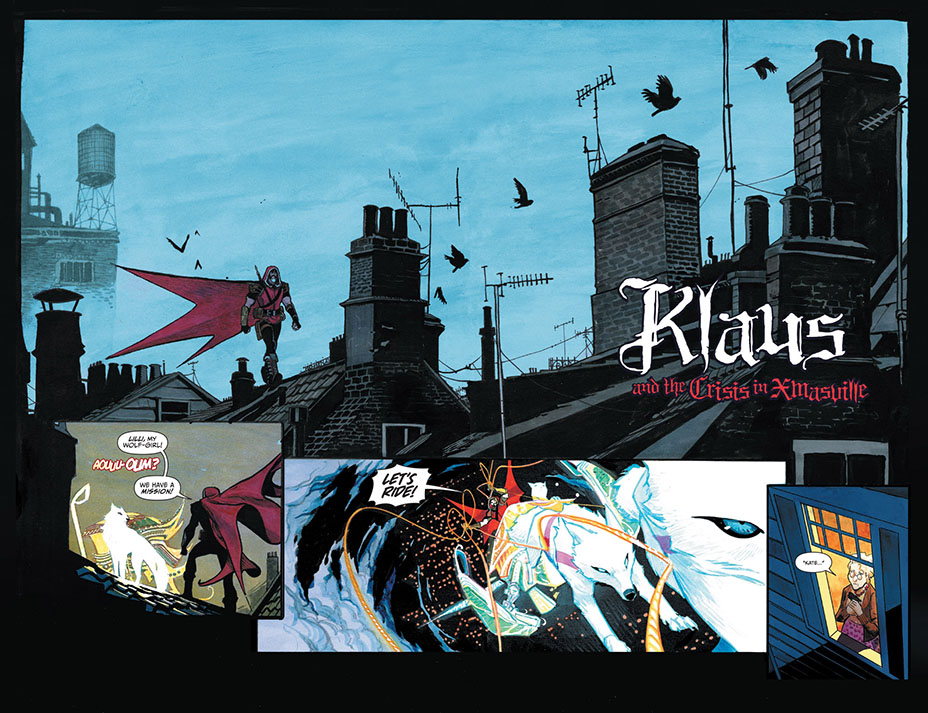 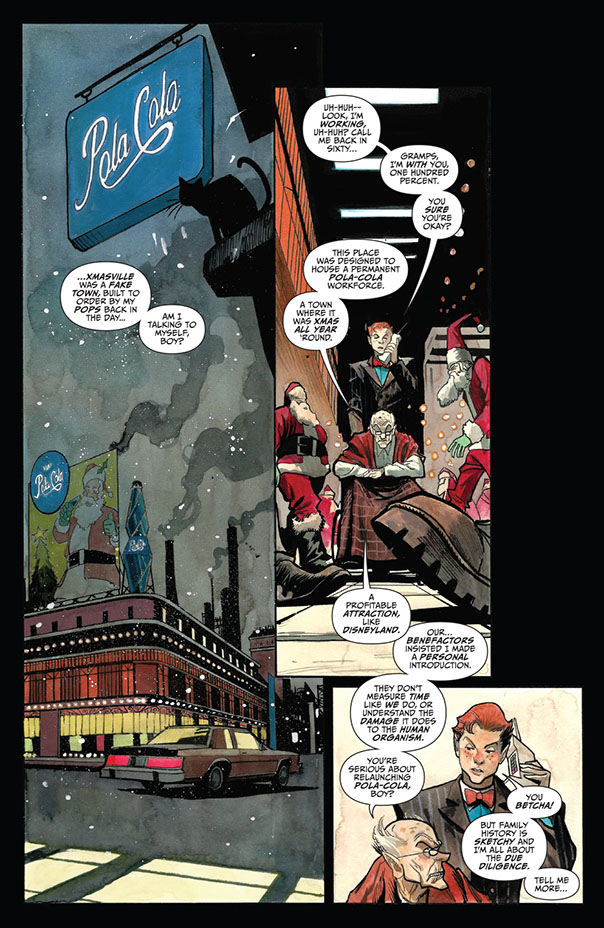 Klaus and the Crisis in Xmasville is available in comic stores and digitally now.