Nothing represents the sad passage from postwar idealism to a culture of political cynicism and chicanery like a newly elected Richard Nixon smugly informing his White House predecessor, “What America wants, Mr. President, is honest government.” That sour closing note carries echoes from 1968 to the present ethical vacuum a half-century later, when Washington, D.C., is now swampier than ever. Playwright Robert Schenkkan picks up where he left off in All the Way to chronicle Lyndon Baines Johnson’s embattled presidency. If The Great Society often feels as much like history homework as drama, it thrums along on the engine of Brian Cox’s unimpeachably magnetic performance as LBJ.

Those of us addicted to HBO’s juicy account of a Murdoch-like media dynasty, Succession, have thrilled to Cox’s ferocious work on that series as a paterfamilias who wields both love and cruelty as different settings of the same human weapon designed to reinforce his power.

As the 36th U.S. president, Cox traces the tragic arc of a growling, bulldog-like man tenaciously grabbing hold of his dream of making a difference only to have it dissolve in his hands, as much due to his own blinkered decisions as to the fragmentation of his party and the cunning of his adversaries.

The actor’s balance of folksiness with gruff authority makes his characterization to some degree a natural extension of Bryan Cranston’s Tony-winning work in All the Way. But the aggressive optimism that defined the character in the earlier installment steadily recedes as setbacks pile up to erode LBJ’s assurance, giving Cox’s turn a more poignant bite. That’s especially apparent in a scene near the conclusion, in which Johnson is alone late at night with his doting wife, Lady Bird (Barbara Garrick). Shaken and sorrowful, he confesses how the accumulation of lies and cover-ups, and the endless stream of personal condolence letters he has written to the families of fallen Vietnam soldiers, have killed the dream. 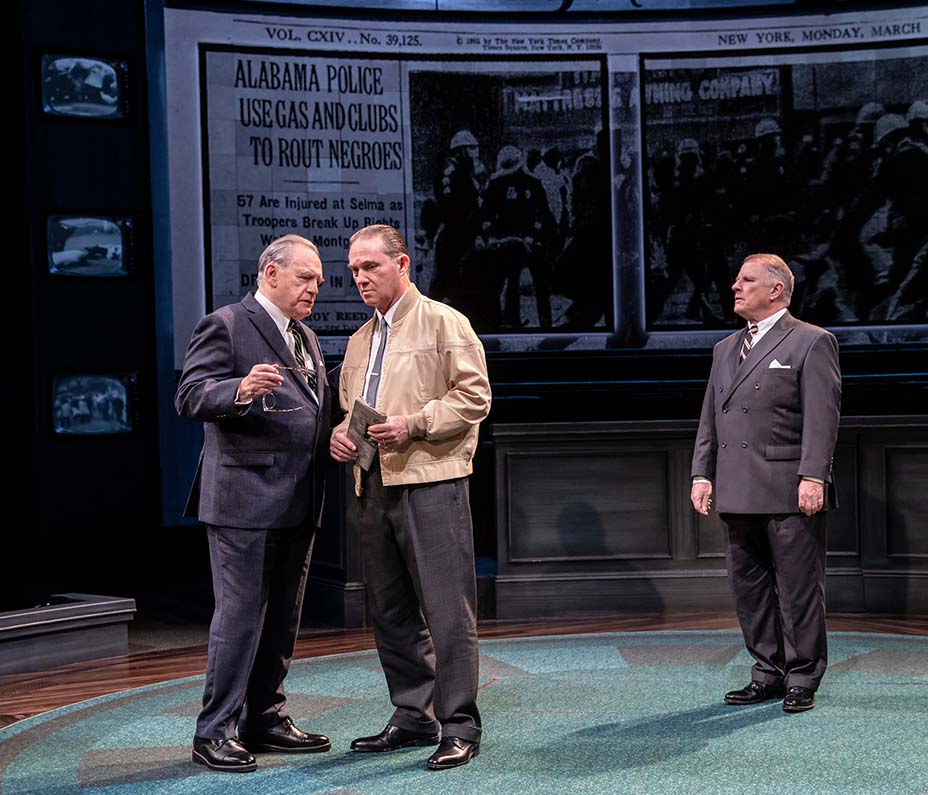 Like the previous installment, Schenkkan’s new documentary drama premiered at the Oregon Shakespeare Festival under the brisk direction of Bill Rauch, capably corralling the large gallery of famous figures and conducting the eventful four-year recap of political and social history.

But the first play had the built-in momentum of a protagonist graduating from the VP spot following John F. Kennedy’s assassination and then setting out to prove himself both before and after a landslide victory running on his own ticket. It also had a sturdy dramatic fulcrum with the passing of the Civil Rights Act. This follow-up is more about the defeat and disillusionment that shaped LBJ’s decision not to run for a second term, so while that arguably gives it greater emotional nuance, it also proves more challenging to theatricalize.

Schenkkan attempts to counter the dense Wikipedia-entry aspect of the material by having LBJ step forward at regular intervals to share down-home anecdotes and analogies, often in direct address. But by the third or fourth time of hearing about bull-riding, catfish and such, this punctuation starts to feel mechanical.

It’s more enlightening watching Johnson work his unique mix of rough-edged Texan charm and strong-arm tactics to get his programs past reluctant opponents, often by cornering them in front of the press. His masterful manipulation of AMA president James Z. Appel (Marc Kudisch) into declaring his support for Medicare while announcing a network of volunteer-staffed free clinics in Vietnam is hilarious, leaving the doctor both helpless and speechless. Likewise, Johnson’s shrewd maneuvering of George Wallace (David Garrison) when the Alabama governor keeps weaseling out of guaranteeing state protection for the Selma-to-Montgomery voting rights marchers. 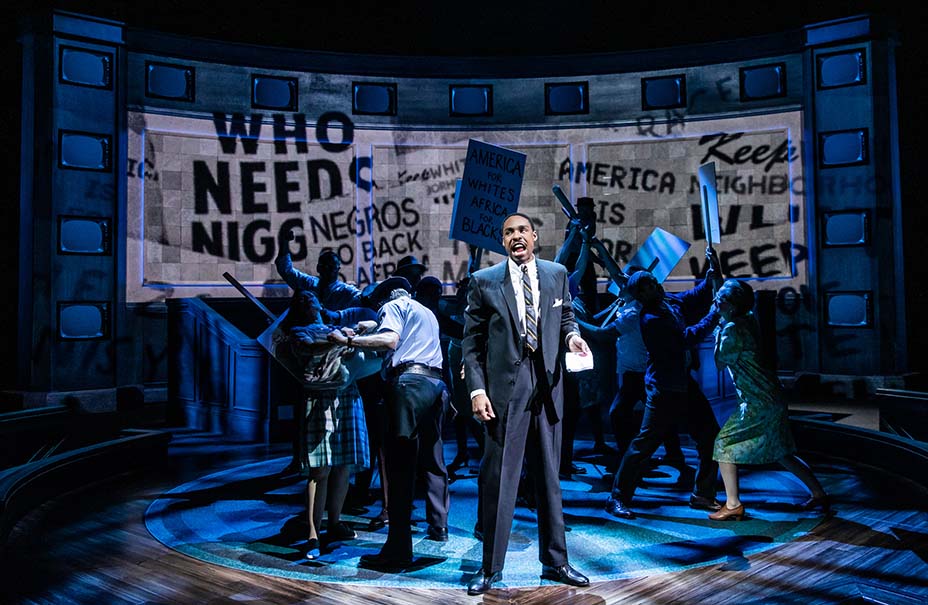 The principal thrust of the play is the gradual process by which LBJ’s progressive agenda to address poverty, education, healthcare, employment and racial injustice got steamrolled by other concerns. It goes without saying that despite Johnson’s advances in those areas, many of the same unresolved issues continue to divide the country today. “Poor people don’t vote and they sure as hell don’t make campaign contributions, so screw ’em!” LBJ tells Lady Bird with bitter sarcasm, anticipating the bloodbath of cuts to his programs. “I understand the economics, but there’s a meanness here that goes beyond the numbers.”

Many scenes in the first act in particular focus on Johnson’s prickly dealings with the Rev. Dr. Martin Luther King Jr. (Grantham Coleman), as the president initially drags his heels on the Voting Rights Act and then fails to provide Federal protection during the first two of three Selma protest marches aimed at overcoming white resistance to that law. Later, when King shifts his attention to inner-city poverty in Chicago, that city’s mayor, Richard J. Daley (Kudisch), grows hostile, reminding the president of the importance of Illinois support in the midterms.

With racially motivated violence and rioting breaking out across the country, divisions within the Civil Rights movement fester, as King’s nonviolent advocacy clashes with the Black Power agitation of Stokely Carmichael (Marchant Davis) and others. Growing unrest at home also makes the continued pouring of billions of tax dollars into the Vietnam War increasingly unpopular. The caginess of defense secretary Robert McNamara (Matthew Rauch) as he lobbies for military budget hikes while making vague promises of an end date to the conflict plays in stark contrast to the rapid escalation of dead and wounded U.S. soldiers, their numbers regularly beamed onto a rear screen. 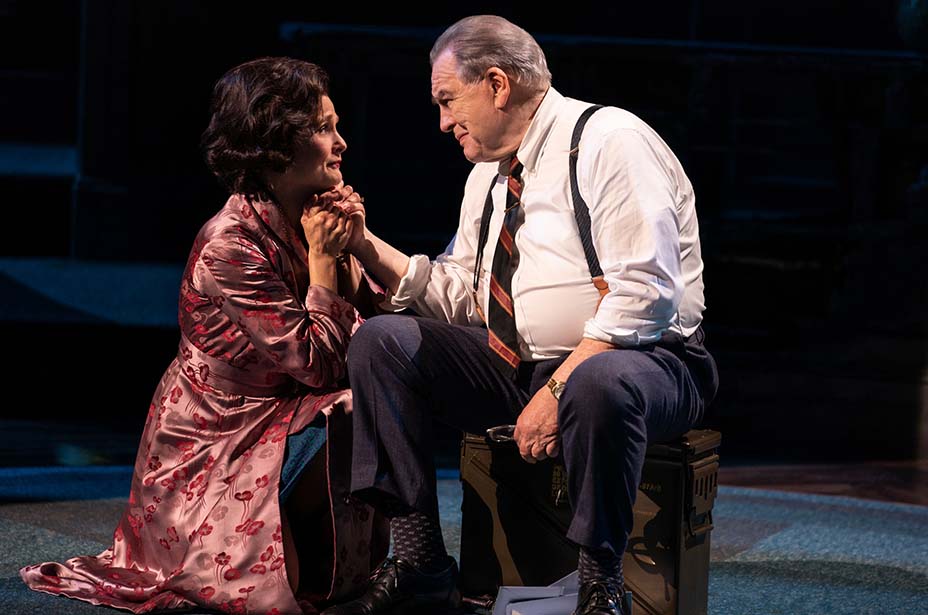 All this is certainly absorbing, either as a reminder for those who lived through the period or a sobering history lesson for those who didn’t, backed by projections of headlines, photographs and news footage. There are many powerful scenes, notably the tense Selma interludes and examples of unprovoked police brutality during peaceful demonstrations, as well as inspiring passages, like LBJ’s “shining moment,” when he finally delivers the Voting Rights Bill to Congress. But at two hours, 40 minutes, The Great Society could have used sharper streamlining to heighten its dramatic potency.

Although the supporting players are given relatively limited scope to shape three-dimensional characters, a handful make vivid impressions. Those include Coleman, who captures King’s physically imposing presence and oratorical command; Kudisch, who remains in touch with the working-class thug beneath Daley’s City Hall suits; and Rauch, who nails the gnawing conflict behind McNamara’s bad-news bulletins and growing sense of hopelessness. Bryce Pinkham has incisive moments as Sen. Robert F. Kennedy, whose blue-blood reserve chafes against LBJ’s farm-boy saltiness as the fellow Democrats become open rivals.

Despite solid contributions from the actors, other key figures like Richard Thomas’ VP Hubert Humphrey and Gordon Clapp’s J. Edgar Hoover tend to blend into the woodwork of David Korins’ mini-congressional chamber set. The FBI director’s use of the COINTELPRO surveillance and dirty tricks program to “expose, disrupt, misdirect, discredit or otherwise neutralize all these Black Nationalist Hate organizations, with special attention to Martin Luther King” is given such rushed handling that the nefariousness of this domestic spying barely registers.

Generally, the writing is too busy sketching in historical detail to spare much attention to character development beyond the central figure, but Schenkkan can be commended for not letting his admiration for LBJ get in the way of a clear-eyed portrait. Cox provides a galvanizing center that keeps you watching, even more so as this driven, passionately civic-minded man begins to acknowledge the fatal flaws in his decision-making. It’s a forceful, ultimately affecting performance that carries the sting of a disenchantment all too pertinent to American political life 51 years later.