The piercing sense of place that Samuel D. Hunter brings to his work, the majority of it set in his home state of Idaho, has perhaps never been accompanied by such plangent notes of sorrow as in his new play, Greater Clements. Anchored by wrenching performances from stage veteran Judith Ivey and phenomenally talented relative newcomer Edmund Donovan, this elegy for people and communities dissolving into a landscape first ravaged and then abandoned by industry eschews political commentary in favor of deeply felt empathy. It’s a bleak but harrowingly beautiful drama that builds to a devastating impact, even with an imperfect third act.

The playwright and his frequent director, Davis McCallum, last worked together in New York on the 2018 Rattlestick production of Lewiston/Clarkston, a diptych of one-acts paired for the first time in an intimate immersive staging for just 51 people per performance. This latest collaboration for Lincoln Center Theater is considerably larger in scale, unfolding in three acts running just under three hours. But it engenders the same haunting feeling of eavesdropping on the fears, frustrations and shattering losses of ordinary people hungering for connection.

McCallum opens the production in darkness, with only the sound of shortened breath and the light of a pit helmet as the voice of a guide talks us through the history of the Dodson Mine. A site yielding primarily silver, lead, zinc and copper, it descends over a mile beneath the earth’s surface, accessing a network of 34 different shafts. The largest mine in Idaho and one of the oldest and deepest in the country, it remained operational until 2005, when the base pay for workers was $9.15 an hour. The guide switches off his helmet and sparks a lighter, which would have been the sole source of illumination until the late 1800s. He then recounts the details of a 1972 fire that started way down at the bottom, in which his grandfather was one of 81 miners burned alive.

The elevators that take workers down into the now-condemned mine are cleverly suggested (albeit with some nagging obstructed-view issues caused by support beams) in Dane Laffrey’s set, which uses hydraulics to shift between the ground floor Dodson Mine Museum, run by 65-year-old Maggie Bunker (Ivey), and the upstairs living quarters, which she shares with her son Joe (Donovan), 27. His voice identifies him as the guide from the opening, and while we learn that his psychological instability gives him the social intelligence of a 15-year-old, Joe’s engagement with all things pertaining to the mine conveys a connection to his family’s history far stronger than that of the more ambivalent Maggie. 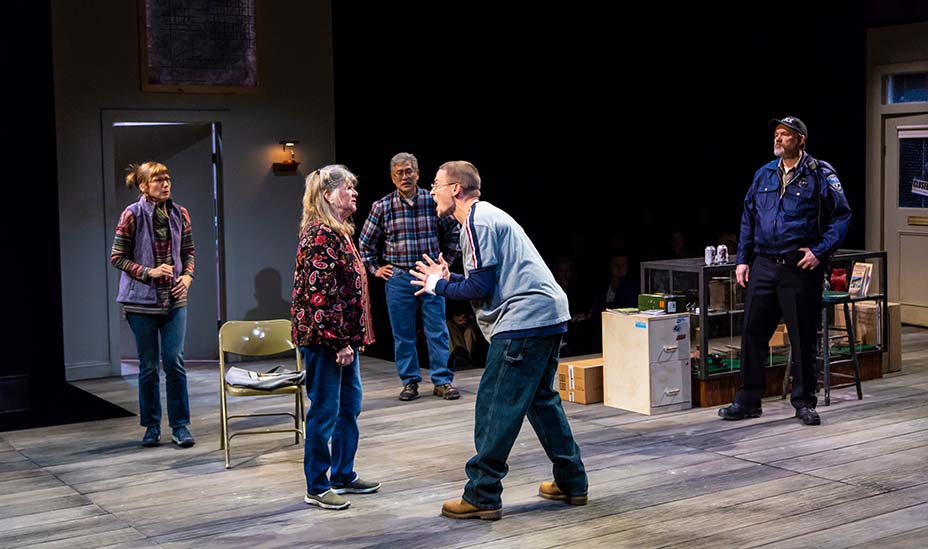 It emerges early on that Maggie, whose husband left her for a man, has recently traveled to Anchorage, Alaska, to bring Joe back home to Clements after becoming justifiably concerned about his ability to survive independently. But the full extent of that punishing trip is revealed only late in the play, in an anguished monologue from Ivey that tears your heart out.

Joe’s return coincides with major changes in Clements, after a dispute between locals and the wealthy Californians who bought up land there to build summer houses and ranches has led to a referendum in which residents voted to “unincorporate” the town, basically sealing their community’s self-destruction. With no more money for city services, streetlights are out, civic ordinances have been all but nullified, and the museum is one of the last remaining local businesses forced to shutter. Despite the efforts of Maggie’s closest friend, good-natured meddler Livvy (Nina Hellman), to have the decision reversed, Clements is already a ghost town.

As Maggie contemplates her future, the chance of a fresh start surfaces with a visit from her high school sweetheart Billy (Ken Narasaki), whose family remained in the area after being relocated by the U.S. government to a Japanese-American internment camp during World War II and losing their property in the Pacific Northwest. Like Maggie, easygoing Billy tends to minimize his family’s painful history, along with his own experiences of racism, while the 14-year-old granddaughter who accompanies him, Kel (Haley Sakamoto), is more vocal in her indignation. Her morbid imagination also makes her fascinated to learn of the famous Dodson fire.

Much of Hunter’s foreshadowing plants a dread that is in large part misdirection, the drama’s tragedy eventually taking different turns while remaining tethered to roots in the past. In the meantime, folksy, down-to-earth Maggie lights up like a schoolgirl around Billy, whose polite reserve doesn’t hide feelings that have only grown over decades of imagining the course his life might have taken with her. The overwhelming tenderness of that long-nurtured love is written all over Narasaki’s gentle performance, not least in the warmth of his eyes as Billy gazes at Maggie. Their romantic history, and the role of Maggie’s WWII-vet father in ending it, folds in another affecting layer of past and present, inextricably intertwined.

As Maggie weighs Billy’s proposal that she come live with him in the town where they went to school, Joe increasingly fights to maintain a calm that clearly doesn’t come easily to him.

In Donovan’s raw, rivetingly combustible performance, he’s tightly wound and uncomfortably intense, staring down at the ground in silence to avoid eye contact or blurting out jagged declarations when pushed for a response. The glimpses he provides of the more thoughtful, sensitive man within the physically imposing yet fragile shell are acutely moving. Even the outer tics of his condition — tugging at his clothing, hunching his body as if to disappear into himself, often keeping a circumspect distance even from his mother — are fully grounded in character, never reading as tricks of actorial technique.

The events that set the play’s despairing climax in motion involve Kel persuading Joe to do something against his better judgment, and while this spreads panic among the other characters, including Livvy and loquacious cop Wayne (Andrew Garman), what really occurred is revealed only near the end of the play. The scene’s non-chronological placement breaks with the rest of the play’s pattern, but it packs a real emotional wallop, thanks to the exquisite work of Donovan and Sakamoto, and evidence of damaged Joe’s innate kindness that deepens the sadness of what we know will follow.

Many will find the epilogue-like closing scene unsatisfying, with its introduction of a minor new character (Kate MacCluggage) who wanders into the museum at an inconvenient moment, making an awkward situation all about her before offering all-purpose platitudes about how, even in scary times, everything will turn out fine. But it amplifies aspects of the drama about changes wrought by coastal incursions into the heartland way of life, and I found the clumsy interaction lingering with me hours afterward, adding to the tragic outcome’s sting. Perhaps more problematically, some will reject the catharsis as blunt melodrama triggered by structural contrivance, but the depth of feeling behind Hunter’s writing argues against that dismissal.

Wherever you land in terms of the final act’s plot turns, Greater Clements remains a poignant and original story about working-class people dealing with the ripple effects of exploitative, dehumanizing industry, economic struggle, mental illness, racism and other quotidian hardships large and small. Its perspective on the disintegration of livelihoods, communities, families and individual lives is one of profound compassion. 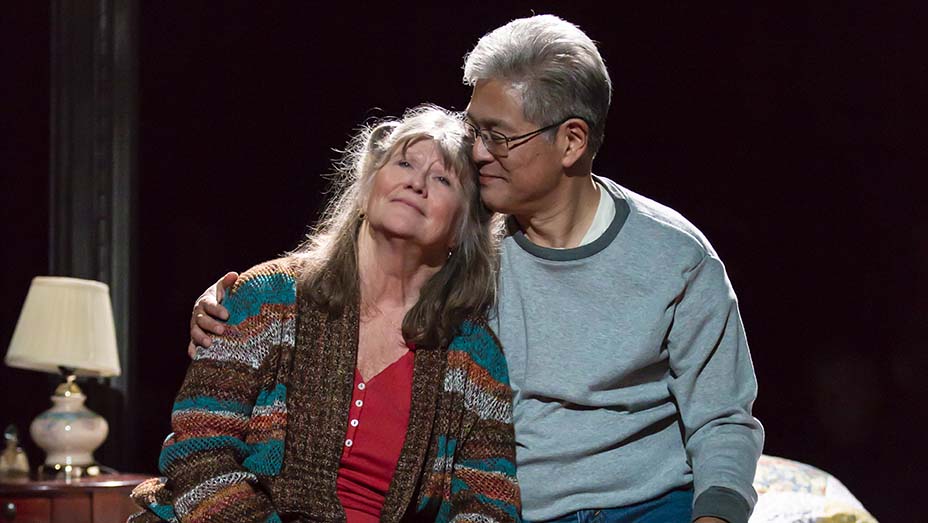 McCallum’s affinity for the aching humanism of the playwright’s work has been evident since Hunter’s breakthrough with A Bright New Boise and The Whale. His direction here combines rigorous naturalism with a quietly symphonic undertow to great effect, echoed in the unsettling strains of Fitz Patton’s transitional music and the somber shades of Yi Zhao’s lighting.

Hunter’s characters seldom take predictable paths, making the play’s three hours go by swiftly in what feels like necessary breathing space. Even Wayne, the cop whose unabashed boyhood crush on Maggie endures in its own goofy way, coloring his disapproving attitude toward Joe, reveals a degree of protectiveness in his warnings to the younger man. Garman brings welcome low-key humor to Wayne’s windy anecdotes — punctuated by him repeating “No but wait for it” every time someone attempts to speed him up. And Livvy’s bitter disappointment and judgment over what she sees as a blind failing on Maggie’s part plays out with touching honesty, perhaps indirectly allowing the playwright to address the ways in which so many Middle Americans could vote against their own interests in the 2016 election.

There’s not a false note in the ensemble’s performances, building on the playwright’s insightful observation of ordinary lives. But it’s the towering work of Ivey and Donovan — the latter already a quiet revelation in Clarkston — that gives the production such rewarding dimensions.

Ivey’s Maggie is a pragmatic, uncomplaining woman who makes light of most difficulties, maintaining a cheery attitude — a kind of willful obliviousness — perhaps as a defense mechanism against the inevitable force of crushing reality. Seeing her ultimately broken by it is tremendously distressing, even more so since her shot at a meaningful connection crumbles too. And Donovan’s performance is made all the more emotionally penetrating by Joe’s guardedness. His naked vulnerability is exposed as he reveals how hard he’s been working since returning just to stay on an even keel, or recalls a childhood compulsion that gave him a sense of purpose but eventually resulted in even his mother making him feel like a freak. I don’t recall more lacerating moments in any performance I’ve seen on a New York stage all year.