A few years back, Robbie Rogers reached out to Greg Berlanti with an invite.

Their status at the time was firmly planted in the friend zone, and the activity — donating old clothes to the L.A. LGBT Center — was really more of a selfless chore and a pretty common one for casual buddies and the like, though it would, according to Berlanti, play a “small but pivotal role” in their relationship. “He showed up with a small bag of clothes and proceeded to empty half of my closet,” Berlanti recalled from the Beverly Hilton’s International Ballroom stage Saturday night during the Center’s annual Vanguard Awards. “Not even my Justice League underwear made the cut.”

To be fair, Rogers quipped, Berlanti had too many “oversized baggies and plaid shirts.” Despite their diverse fashion choices then and now — Rogers showed up to the event in a pale blue Prada suit with a geometric print button-down while Berlanti joked he was wearing “TJ Maxx” — the two grew close, eventually became a couple, had a son and got married last year.

It was not their donations, or any pair of superhero underwear, that led them to the stage as part of the headlining honorees of the L.A. LGBT Center’s Vanguard Awards, however. They shared a bill with Ricky Martin, philanthropist Ariadne Getty and hosts Kelly Ripa and Mark Consuelos (star of Berlanti’s Riverdale) for their respective and impressive accomplishments on behalf of the LGBTQ community in media, entertainment sports and beyond.

But it almost never happened.

“When Greg and I were first asked to be honored together, we were inclined to pass,” Rogers revealed, explaining that they are both very shy. Private, too. They have kept their relationship out of the spotlight and remained relatively mum about romantic details, even going so far as to not allow cellphones inside their December 2017 wedding. That changed Saturday night as the two delivered prepared remarks during which they both had tears rolling out of their eyes as they detailed their mutual respect for each other’s careers, tireless activism and humble hearts.

If anything, stepping out of the shadows to fully embrace a larger platform for the cause proved to be a throughline of the evening. Getty has rarely spoken publicly about the causes she supports, while Martin has not even been out of the closet for a decade.

Getty, who received the Rand Schrader Distinguished Scholar Award, was the first honoree to take the stage following a heartfelt introduction by her gay son and lesbian daughter, August and Nats Getty, in a presentation that marked the first opportunity they have had to publicly acknowledge her life and their gratitude for the woman she is.

“Our mother is much more than a philanthropist,” said August Getty, a noted fashion designer who explained that he never officially came out to his mother. He just told her, “Mom, I’m going on a date with the room service guy,” to which she replied, “Which one?” He added: “My mom celebrates every aspect of my life and being gay is such a huge part of it.”

Nats Getty followed it up by saying that Ariadne is not just a mother to her biological children, she’s a mother to any and everyone who comes into her life. “She has zero judgment and gives with her heart.”

In accepting, Ariadne Getty claimed to be nervous and “shaking like a leaf” but managed to seem cool and collected in speaking without prepared remarks. She praised August for introducing her to the center — and to all of his ex-boyfriends— and name-checked GLAAD chief Sarah Kate Ellis for “prodding and nudging” her to “come out of the shadows” and let the light shine on her philanthropic work and financial contributions to organizations such as GLAAD and the L.A. LGBT Center. 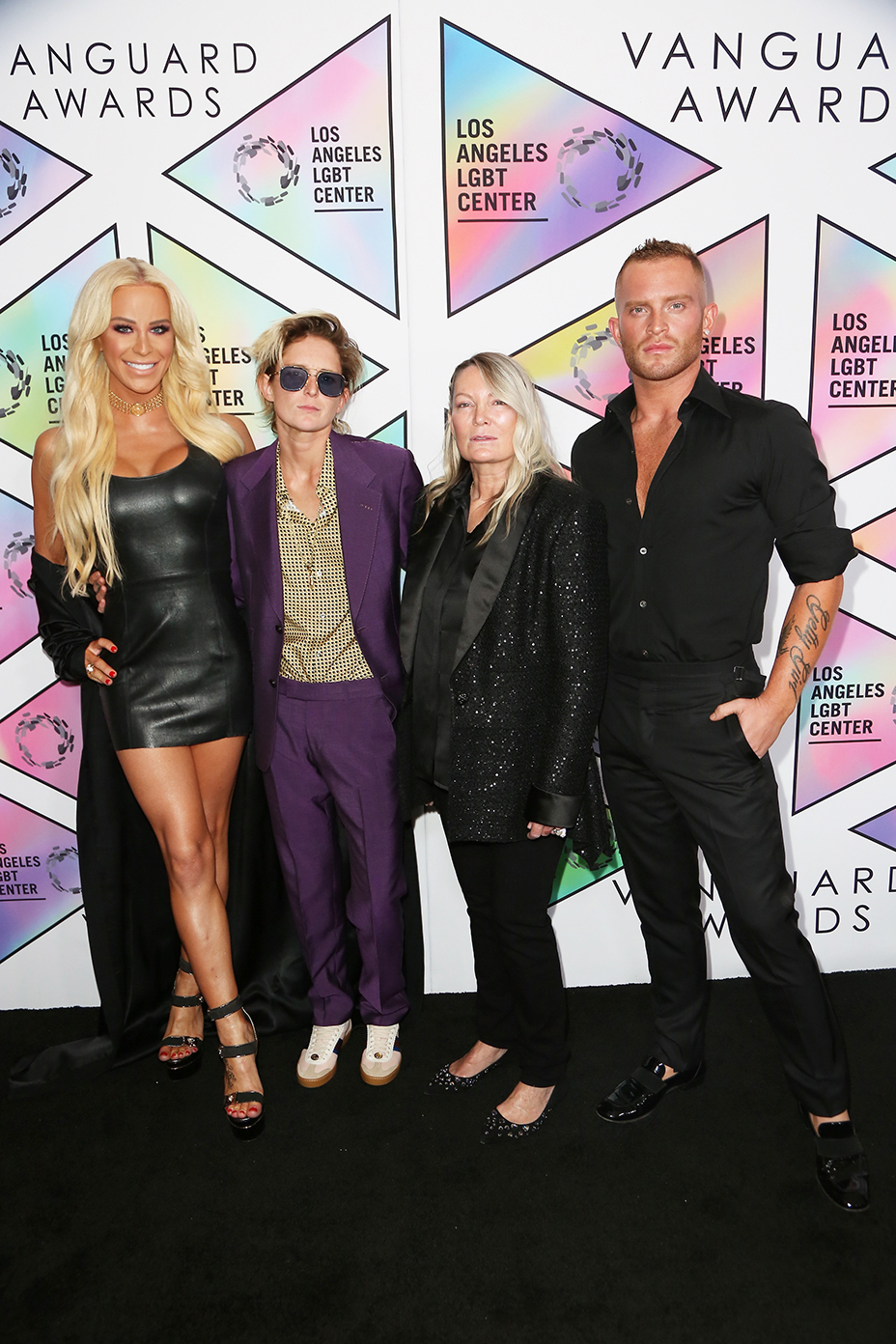 “I encourage everybody to get connected and start being active and don’t be shy like me for all the years I have been,” she said. Ariadne Getty then said that she attended a fundraiser for the Center at filmmaker Roland Emmerich’s house and it changed her life because it was there that she met L.A. LGBT Center CEO Lorri Jean. “A city cannot afford to be without a center. It’s a place where there is so many things to do for every age category. Do your part to support them and take a tour and talk your best friends into going.”

Ariadne Getty’s personal plea and closing was greeted with a standing ovation that saw another installment when Jean took the stage. She not only stressed the importance of the Center’s work during troubling political times, but also praised the Center’s staff, volunteers, regular visitors and multitude of services that have made it what it is for the past 49 years. That means next year will deliver a special anniversary, and Jean announced that the Center and its staff have planned a special dinner and show “worthy of this amazing milestone” to be held at the renowned Greek Theatre. 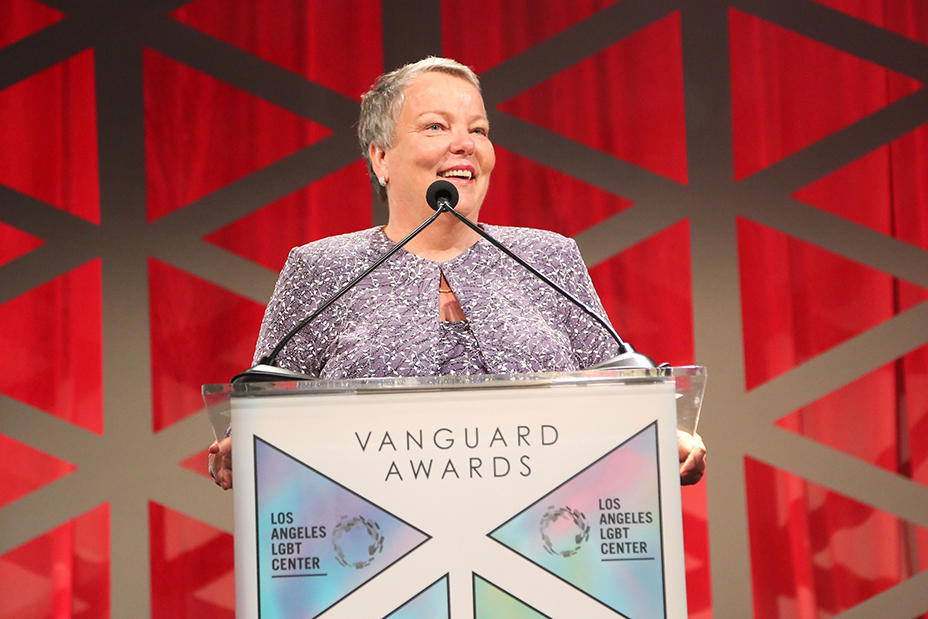 After Jean’s remarks, the program took a brief intermission for dinner service only to kick back up again with a raffle presentation and live auction. Then, back to the awards.

Love, Simon star Nick Robinson showed up to honor his friends, Berlanti and Rogers, whom he got to know while filming the lead role in Berlanti’s film playing a gay high school student in the first major studio romantic comedy to feature such a storyline.

“Sometimes when you shoot a movie, it’s just a job,” Robinson said. “You show up, you do the work and head home and collect a paycheck. On our film, things got very personal.” 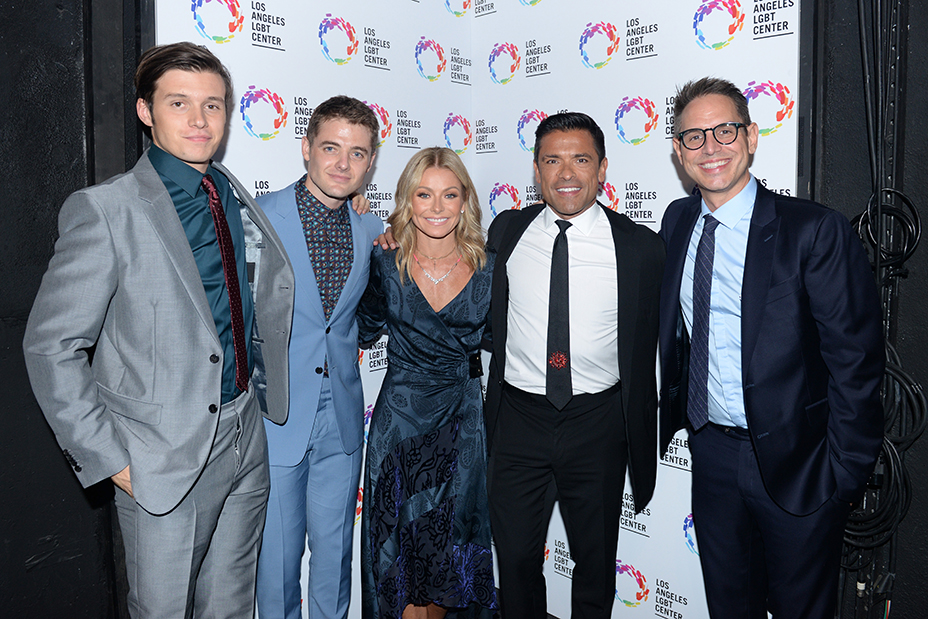 He said Berlanti shared a lot of himself and his experiences and throughout their collaboration, he got to know his boss’ family. Also significant: Robinson’s own brother, Joe Robinson, came out to him during filming. The revelation received a healthy applause and cheers from the sold-out crowd, which included Nicole Scherzinger, Tara Reid, Conrad Ricamora and NBC Entertainment president Bob Greenblatt, who made news over the weekend with plans to step down from his top post at the network. Also in the room: Sarah Jones, whose critically acclaimed one-woman show Sell/Buy/Date opens at the Renberg Theatre on Sept. 27.

Then came a deeper dive into Berlanti’s long-running commitment to inclusive stories, diverse characters and LGBTQ plotlines. He made his directorial debut with the indie film The Broken Hearts Club, starring Dean Cain, Zach Braff, Timothy Olyphant and Ben Weber. He then championed many ground-breaking moments on the small screen with the first gay male kiss on Dawson’s Creek, the first recurring trans character on Dirty, Sexy Money and gay superheroes on Arrow and Black Lightning. More recently, he cast Ruby Rose for the pilot of Catwoman playing a lesbian superhero. He is now the most prolific television creator and producer and recently set a record for the most number of shows on the air with 14 — not to mention that freshly signed $400 million deal with Warner Bros.

That’s when Berlanti and Rogers took to the stage, first thanking Robinson and revealing that he “is exactly the person you want him to be,” as he is kind and thoughtful. “We hope our son grows up to be just like Nick,” Berlanti said. “Except the actor part. Please, God, don’t let our son be an actor.”

Rogers got serious by paying respect to the many LGBTQ individuals who paved the way, not only at the Center but in the culture at large, so that they could have the life and personal freedom they enjoy today. Even if it seems at risk now under uncertain political times. He added: “Our safety and equality and basic liberties are under threat, now more than ever. There are others, many of them elected officials, who not only don’t want to see advancements for the disenfranchised, they want to take us back to a time when our story wasn’t even possible.” 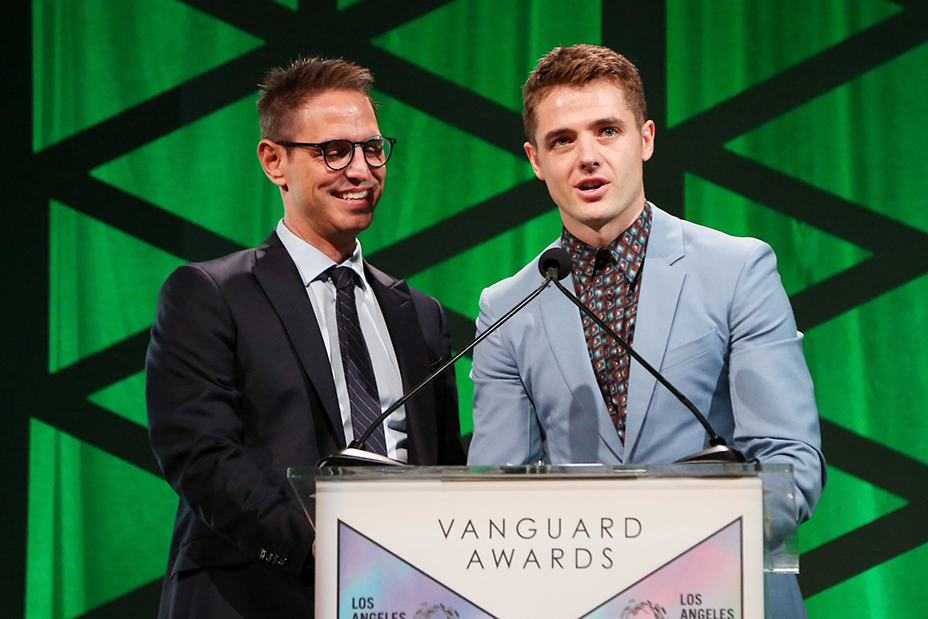 That story got some attention thanks to Berlanti, who detailed how they first met and how he got a front-row seat watching Rogers deal with challenging times as a professional soccer player when he became the first openly gay pro athlete of a major sport. (He also paved the way as the first openly gay athlete to play on a championship team in a major league sport when the L.A. Galaxy won the MLS trophy in 2014.)

“The entire time Robbie was playing, through all of this, you should know, his reason for doing so never wavered. He wanted LGBT kids to have someone to watch that was like them. He knew the power of representation, because he didn’t have it when he was growing up, isolated and alone,” Berlanti said, adding that he fell in love with Rogers for many reasons, including the way he met every hardship with compassion for the soccer community as a whole.

But as if he couldn’t have been more enamored with his talent and skill on the soccer field, Berlanti said watching his husband be a father to their son, Caleb, with all his “tenderness, playfulness and joy” is the “single greatest joy of my life.” (Cute sidenote: Caleb calls them “Daddy G” and “Daddy R,” respectively.)

It was then Rogers turn to test the waterworks by praising his husband’s career accomplishments in building superhero worlds “many times over,” while often going to battle with his bosses who would challenge his inclusive choices. “Greg would say, ‘What good are these heroes if they don’t look like the world they’re saving?’” Rogers said.

“Enough crying and compliments,” Berlanti quipped once they shared their stories through each other.

But it wasn’t done.

A standing ovation arrived at the end of their speeches when Berlanti closed by saying that often, “growing up gay is hardest at times to receive the love that you really deserve. You are your own success story.” 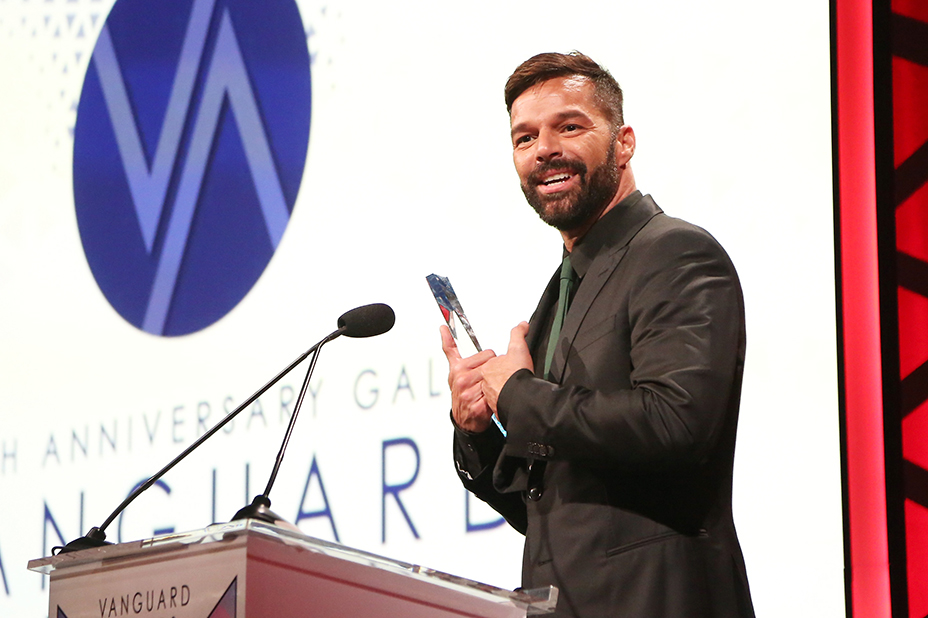 Jon Heder on New Holiday Film, Hosting an Exchange Student and Why He Moved Out of Los Angeles

Nas on Making Directorial Debut With 'Video Music Box': "This Is a Story I’ve Always Wanted to Tell"