Before Barbra Streisand had appeared on the big screen in her first feature role, as Fanny Brice in 1968’s Funny Girl, she was already admitted to the film Academy. At the time, that was enough to warrant skepticism in some quarters. In March 1969, then-Academy president Gregory Peck was asked about Streisand’s membership, and he noted that an exception was made but denied that there was any studio politics behind it: “Impossible!”

Gregory Peck, president of the Academy of Motion Picture Arts and Sciences, emphatically stated yesterday that neither favoritism nor studio politics were involved in admitting Barbra Streisand to Academy membership, even though customary rules of eligibility were waived to permit her to join.

While membership traditionally is bestowed in recognition of achievement in motion pictures, Miss Sreisand was voted in before she was seen in a film. Usual requirements call for an applicant to have appeared with distinction in a minimum of three major features, or to hold an Academy nomination in lieu of three such credits.

Miss Streisand met neither of these criteria at the time.

Presently a best actress nominee for Funny Girl, Miss Streisand was granted membership in late 1967 while she was making that picture at Columbia. Her name appeared in the Academy membership book published in January 1968. Funny Girl was not released until late fall 1968.

Peck said there was nothing irregular about the special treatment accorded Miss Streisand. He acknowledged that the usual guidelines were discarded, but explained that the exception was made in Miss Streisand’s case, under discretionary powers laid down in Academy by-laws, in recognition of her already established stature as a performer entering upon a film career.

“She was a great star of the Broadway stage,” Peck commented. “She was acknowledged universally to be one of the outstanding talents of recent years. There was no question about her ability. It was within the discretion of the actors’ branch to accept her, and we had the privilege of doing that.”

Peck categorically rejected any possible implication that Miss Streisand might have been rushed into membership as a result of studio politics or pressure.

“Impossible!” he stated. “There is no studio pressure in any phase of the Academy’s activities. There are loyalties and advocacies, of course, but pressure, no. It’s impossible. We’re not dependent on the studios. We’re not under any obligation to them. They have no leverage at all on the Academy.”

He granted that some individual Academy members may feel special loyalties, but he insisted that was true in any organization — whether charitable, civic, social or welfare.

“There is no leverage on any selection of members or any other kind of activity,” he said unequivocally.

Moreover, Peck indicated that there was ample precedent not only in the actors’ branch, but in other Academy branches for speeding membership in some cases and relaxing normal standards in other instances where it was felt that circumstances — albeit predicated solely on merit — warranted.

“Exceptions have been made … for outstanding artists and executives,” the Academy head noted. “Charles Bluhdorn (board chairman of Gulf & Western, Paramount’s parent company), who entered motion pictures in a position of prime responsibility, was admitted immediately once an application was made …

“From time to time we accept bit players who have given long service, who have been useful performers over a long period of years. Ordinarily a performer must wait until he has three major films in release, even though the performer is excellent, and we’re quite sure he will fulfill the requirements eventually. But there are exceptions.” — Staff report, originally published on March 27, 1969. 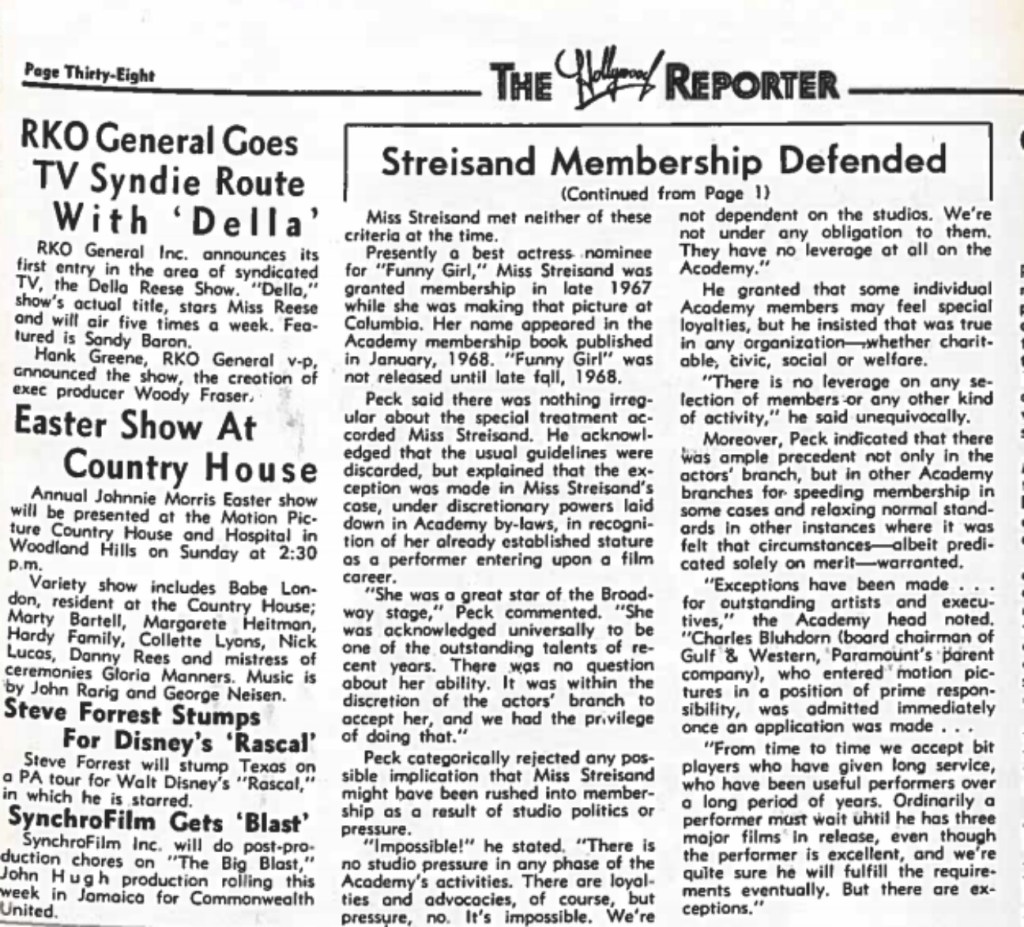