Universal’s new attempt to bring the Grinch — that iconic Dr. Seuss creation who’s as cuddly as a cactus and as charming as an eel — to the big screen is expected to bring in a respectable $55 million-$60 million this weekend. This animated version from Illumination Entertainment has Benedict Cumberbatch voicing the green Christmas-hating Grinch with Rashida Jones, Kenan Thompson and others in co-starring roles.

The story follows the usual beats, with the Grinch living on the outskirts of Whoville. Fed up by the residents’ annual Christmas celebration, he sets out to ruin the festivities by stealing all the presents and decorations. Universal and Illumination have sold the movie with a campaign that has played up the familiar elements of the story and accented some of the character’s grumpier personality traits. Here’s how the studio rolled out the marketing for the holiday film.

A series of outdoor billboards in cities like Los Angeles, Chicago and New York featured the Grinch hurling insults specially suited insults to those cities. In New York, they touched on subjects such as Times Square (“where classy meets subtle“) while in Chicago he poked fun at its nicknames (“You’re the second city? Must stink to not be the first.“) and in L.A. he told everyone to go home and mocked the city’s traffic problems (“Stop moving to Los Angeles, it’s full.“).

Those sorts of ads are fun and meant to encourage sharing, getting the attention of not only the general public but also the local media. They aren’t overtly mean, just somewhere slightly north of Dad Joke territory. They demonstrate some awareness of local issues or traditions to make someone passing by them on the highway or sidewalk chuckle and think fondly about the movie without being actually offensive.

The first teaser poster shows a tiny child standing on his own against a green background with the copy assuming us “He gets meaner.” The second, released at the same time as the first teaser trailer, shows the grown-up Grinch scowling at the camera while his faithful dog, Max, looks much more upbeat.

Another offers a look at what it labels the main character’s “Resting Grinch face.” The Grinch and his faithful dog stand looking out over Whoville on the theatrical one-sheet, with the copy “Scheme big” at the top.

After getting through a Minions-hosted introduction to the official trailer (17.7 million views on YouTube), we swoop into the home of the Grinch and see his morning, including not being able to turn off an alarm clock radio that plays “Happy.” He continues to have breakfast and go about his routine while a new version of the classic song plays. Finally, he makes his way into town where he shuts down the well wishes of passers-by, intentionally causes problems for fellow shoppers and is generally a jerk.

There’s more of that in the next trailer (3 million views on YouTube) from June, as well as some of the Grinch’s childhood backstory to help explain his villainy. Nothing really new here in terms of tone, though there is quite a bit of new footage on display. It looks pretty funny, though, even if it doesn’t exactly add anything to our previous experiences with the character.

The third trailer (7 million views on YouTube) from late September has a few new scenes but otherwise presents the same story we’ve previously seen. That one received an alternate version featuring the Minions watching the trailer MST3K-style, just to reinforce the Illumination connection.

The first look at the character in motion came through a brief TV spot that aired during NBC’s broadcast of the Winter Olympics’ opening ceremonies earlier this year. We see the Grinch watching the Olympics and dreaming of what it would be like to be adored by the masses before he’s pulled back to reality. NBCUniversal got in some solid cross-promotion while not showing much of the actual movie.

? IHOP, which created a movie-themed menu of green pancakes and other items with appropriately Grinch-y names.

? 23andMe, which offered some insights into the DNA and genetics into the Grinch. That site was supported by a TV spot that had the character exploring his genetic history.

? China Glaze, which offered a series of movie-themed and branded nail polishes.

? Wonderful Pistachios, which ran a co-branded TV campaign using the Grinch’s green to accentuate the green shells of its product.

? Chex Mix, which offered a recipe to create a movie-themed holiday snack.

NBC Universal, the studio’s parent company, launched a “Grinch for Good” contest encouraging people to share a story about someone special in their life. A TV commercial featuring Golden State Warriors star Draymond Green and the Cleveland Cavaliers’ J.R. Smith and as well as Joel Embiid from the Philadelphia 76ers receiving taunting phone calls from the Grinch aired in mid-October.

A first look at the title character along with the news he would be voiced by Cumberbatch was revealed at Universal’s CinemaCon 2016 presentation. And just a few weeks ago at the end of October, the lyric video for the theme song, this time covered by Tyler, the Creator, was released.

Special note needs to be made of the movie’s official Twitter account. That profile has been consistently publishing GIFs and short videos of the Grinch reacting to basketball and football games (usually those broadcast on NBC, of course) as well as commenting on #NationalCoffeeDay, pumpkin spice and more. It’s a fun execution that takes what is in reality a limited resource — assets from one feature film — and applies them to a wide range of cultural topics. 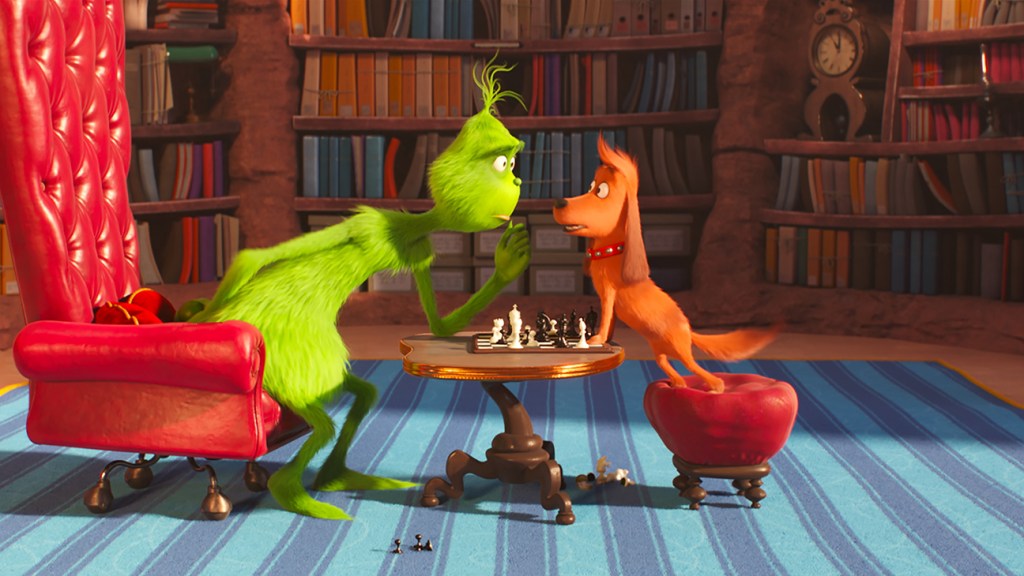 Universal has turned out a campaign focusing on the Grinch and his grinchiness as the central components of the messaging to the audience. From the sarcastic commentary on football games via Twitter to the personalized billboards in various cities, the studio worked hard to make sure he was at the center of the push from beginning to end, positioned as a relatable grump who just wants to be left alone, as do we all.

That focus has come at the expense, to some extent, of the story. The trailers offer the outlines, but we already know basically what’s going to happen and when. So it doesn’t waste time belaboring the obvious and just gets to how the Grinch is going to be cranky, all while tapping into the power of celebrities like NBA stars and others to help spread the word.