Gwyneth Paltrow owns some of the biggest prizes Hollywood has to offer — Oscar, Emmy and Golden Globe trophies to name a few. But when she made her way to the stage Thursday night to accept one more — amfAR’s Award of Courage, presented during the AIDS research foundation’s 10th annual Los Angeles black-tie gala at Milk Studios — the 47-year-old revealed she doesn’t dig the tradition of what comes next.

“I didn’t prepare anything because I don’t think I believe in thank-you speeches,” said Paltrow minutes after 10 p.m. upon taking the stage (in an Adam Lippes dress with Bulgari jewelry) following a humorous presentation by close pals Dan Bucatinsky and Don Roos. Despite her objections, she gave it a go anyway. “I did want to thank amfAR for this. I feel very humbled and very undeserving and very appreciative. Of course, I believe so much of amfAR’s work and have done and will do whatever I can to keep supporting the work until there is a cure for HIV and AIDS, which is especially prescient right now as a mother coming into a time with teenagers, it all hits home in a very different way.”

Paltrow and the other Award of Courage recipient, absentee art world guru Larry Gagosian, were singled out for “their profound commitment” to the cause as well as additional philanthropic endeavors. Paltrow has a relationship with amfAR that dates back a few years, as she hosted the L.A. gala in 2014 for the Tom Ford tribute and emceed a year later for friend and collaborator Ryan Murphy.

“The tireless work amfAR does to make us all a healthy safe planet is incredible,” she continued before revealing that the award is “exceptionally” meaningful at this time in her life. “Courage is something that I strive to have all the time. Really since I’ve turned 40, I’ve sort of found the courage to be really who I am and speak from the truest place.”

She then singled out her table, occupied by “beautiful husband” Brad Falchuk and longtime friends as well as colleagues from Goop “who I love and admire so much and give me the courage every day to keep going and doing what we do and creating this amazing platform.” The entire speech clocked in at two minutes and six seconds, and without Gagosian in the building, it made for a lighter night overall.

No official reason was given for Gagosian’s absence, though he made his presence known during the auction portion of the evening by donating five pieces of art. Auctioneer Simon de Pury handled the bidding, helping amfAR raise north of $1 million with items including a custom-tailored suit by Tom Ford and a front-row seat to an upcoming fashion show, a post-event photo shoot with celebrity photographer Eric Ray Davidson (and Paltrow for a posing partner) and an opportunity to party hop with Prince Albert II of Monaco during next year’s Oscar week.

Back to Gagosian: Musician pal Robbie Robertson showed up to accept the award on his behalf, offering a faux excuse for the fact that he was a no-show. “Larry sends his deep regrets that he couldn’t be here tonight because he is on a hot lead to score a fantastic deal on the Mona Lisa. And as Larry says, ‘Business is business — this could be big.’ So to the wonderful people of amfAR, please don’t stop bringing the life-saving discoveries in the fight to cure AIDS forever,” said Robertson.

Partners and Paltrow insiders Bucatinsky and Roos zeroed in on fight to cure the disease, as well, but only after some good-natured ribbing. “I met Gwyneth in 1999 when I directed her in a movie I wrote with Ben Affleck,” said Roos of their collaborations with her former flame in Bounce. “This is a good chance to actually sort of make amends because I kind of had a talent crush on Ben Affleck. The movie was very dramatic, so the two of them would do these big emotional scenes. I would say ‘cut’ and I would go up to them and say, ‘Ben, you were amazing, such levels, such honesty, just the whole way your face was arranged.’ And Gwyneth would stand there, like, ‘Anything for me?’ I’d say, ‘Sorry, I wasn’t looking at you, I’m sure you were fine.’ This is me saying I’m sorry. It wasn’t intentional, he just kind of pops onscreen. It’s not your fault. You’ll get there.”

Bucatinsky pledged to call Paltrow and apologize the next day “for this entire thing,” but then he got serious. “This is not about me or Don or who likes you more. It’s about you, and if it is a competition, we’ve all won because you’ve charmed us and you’ve moved us and you’ve made us laugh with your luminous Oscar-winning roles in so many wonderful films,” he explained. “AmfAR’s Award of Courage is a particularly apt accolade for Gwyneth, who has never been afraid to step out of her comfort zone to put her love and her energy and her vision towards a new venture, a creative endeavor, a charitable cause.” 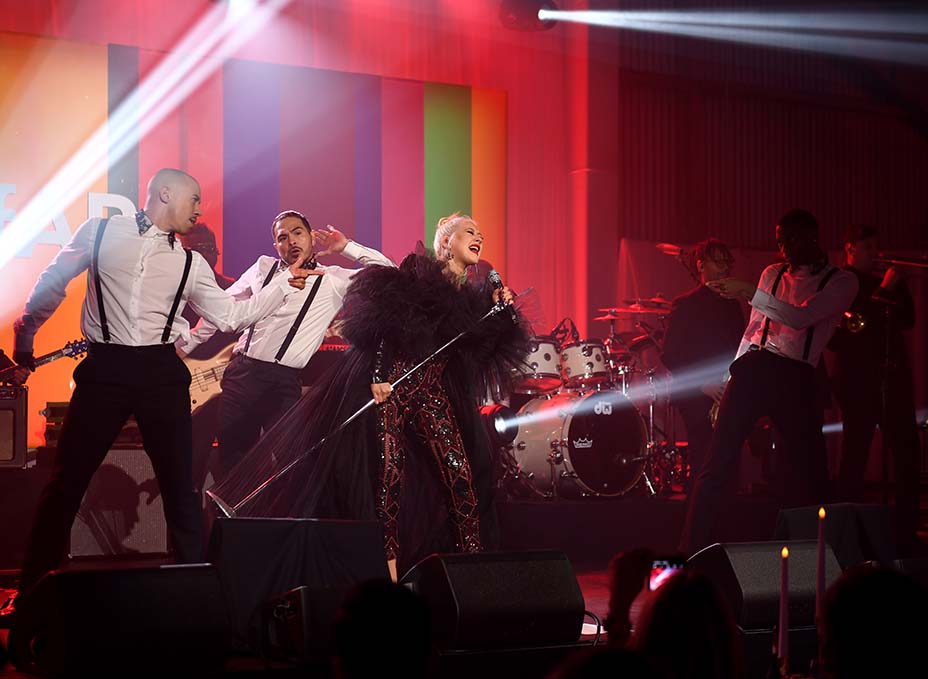 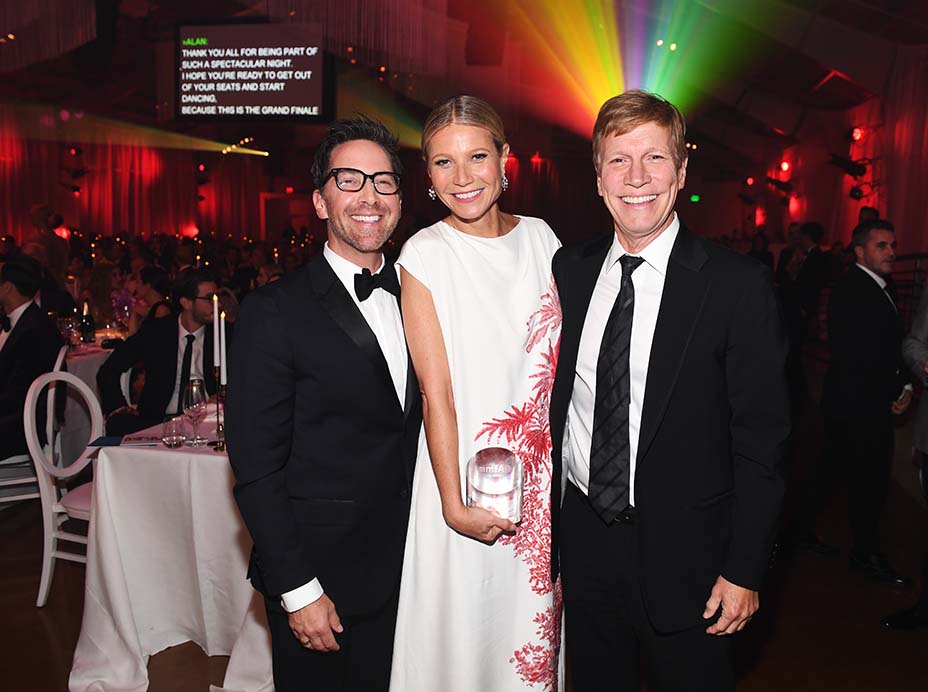 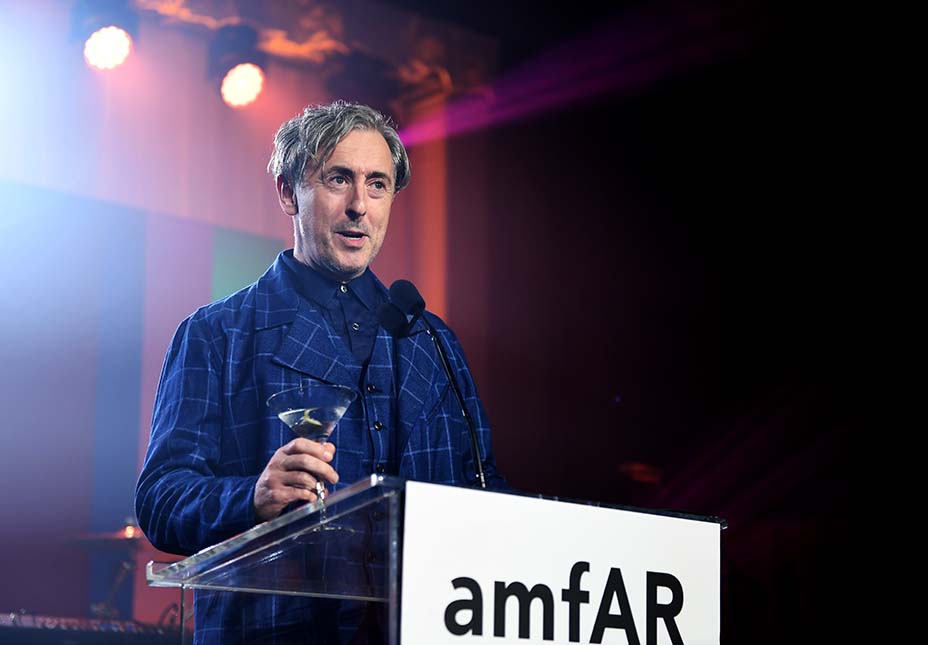