In “Road to Hell,” the exhilarating opening number of the utterly fabulous Hadestown, Hermes, the conductor of souls into the afterlife, invites us to “Ride that train to the end of the line.” He’s played with seductive authority and knowing humor by the eternally elegant Andre De Shields, outfitted like a superfly pimp in a flashy silver suit, and it’s hard to imagine anyone resisting his call. He sells a ticket to a bewitching journey that pays off at every turn.

Spun out of a 2010 concept album by singer-songwriter Anais Mitchell and developed together with director Rachel Chavkin as a seamless theatrical experience, this beguiling, virtually sung-through musical is notable for the expressive beauty of its score, the dark imagination of its stage pictures and the clarity of its storytelling. Performed by a first-rate cast and played with spirited feeling by seven onstage musicians, it arrives on Broadway with a furnace-like blast of creativity.

The Orpheus and Eurydice myth has been a source of inspiration to artists across multiple forms for centuries, in music alone ranging from Monteverdi through Gluck to Offenbach, from Don Shirley to Nick Cave, Arcade Fire and Sara Bareilles. 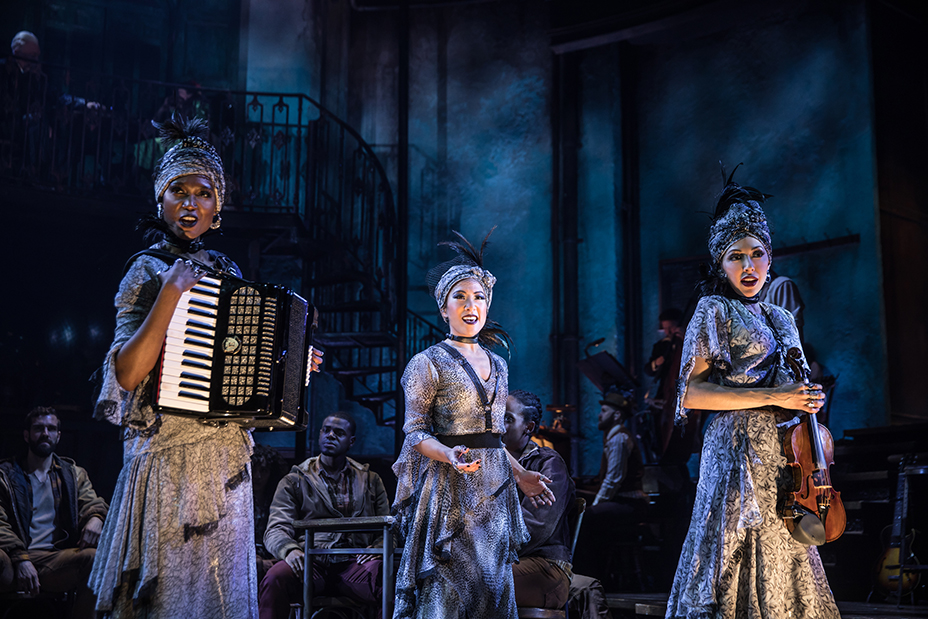 This version bears passing similarities to the 1959 Marcel Camus film Black Orpheus, which is also being developed as a Broadway musical. While Rio de Janeiro, with its carnival atmosphere and bossa nova sounds, provided a vivid backdrop for that retelling, Mitchell’s musical finds corresponding textures in the French Quarter decadence of New Orleans, even if the city is never identified. She punctuates her ethereal folk balladry with invigorating bursts of traditional jazz, blues and gospel in a wide-ranging musical palette whose influences extend from country to Kurt Weill.

The project’s earliest roots were as a community theater production in Mitchell’s home state of Vermont. Following the album release, the singer-songwriter toured with the piece as a folk concert featuring a changing lineup of guest artists before bringing on board Chavkin, the fearlessly innovative director of Natasha, Pierre & the Great Comet of 1812. The show benefits immeasurably from having been built as a collaborative venture, honed in three pre-Broadway engagements over the past three years — at New York Theatre Workshop, in Edmonton, Canada, and at the National Theatre in London.

The messenger of the gods, Hermes, the guide “with feathers on his feet,” is an ideal fit for narrator duties, introducing the main characters — gods and mortals — in his toe-tapping opening song and then providing the connective tissue throughout. His Creole-flavored flamboyance is shared by the Fates (Jewelle Blackman, Yvette Gonzalez-Nacer and Kay Trinidad), three scene-stealing queens dressed in flapper chic who rule the destinies of mortals and harmonize like enchantresses, frequently picking up instruments to join the musicians. 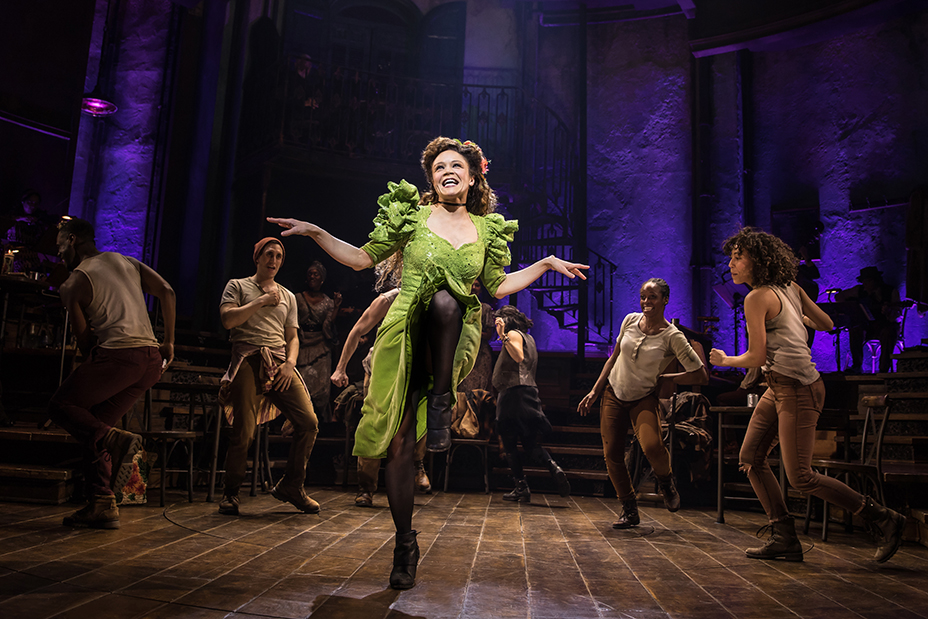 Mitchell relocates the myth to a time that alludes to the Depression era without getting too specific. In this long winter of hardship, the poor, naïve Orpheus (Reeve Carney) takes one look at the more worldly runaway Eurydice (Eva Noblezada) when she blows into town, hungry and cold, and he’s instantly smitten. In the lovely “Wedding Song,” his reckless romantic instincts collide with her more jaded realism as she sings, “Lover tell me if you’re able / Who’s gonna lay the wedding table? / Time’s being what they are / Dark and getting darker all the time.” But being the son of a muse, touched by the gift of music (his lyre here becomes a guitar), Orpheus reassures her that when he completes his beautiful unfinished song, spring will come again, spreading its bounty at their feet.

About those seasons — they are controlled by the goddess Persephone (Amber Gray), who struck an agreement with her well-heeled industrialist husband Hades (Patrick Page) to spend half the year with him in the clanking Underworld he rules, and the other half above ground, allowing nature to flourish. But she grows weary of his grim domain, with its oppressed workers toiling over steel, oil, coal and electricity. So Persephone cuts short her time down below, leaving Hades to seek out a new songbird in Eurydice.

The prodigiously talented Mitchell’s command of eclectic musical styles and ability to make them cohere is impressive, and the poetry and humor of her lyrics no less so. There’s a playfulness in her rhymes that makes you sit up and pay attention, as much as the gorgeous melodies, given full-bodied life in the orchestrations and arrangements of Michael Chorney and Todd Sickafoose, whose involvement dates back to the project’s inception and the 2010 album, respectively.

While anyone with even a basic familiarity with the story will know what’s coming, there’s mystery and suspense in its transfixing developments. Orpheus remains too absorbed in his music to notice that Eurydice’s empty belly leaves her open to temptation, spurred on by the Fates, singing in the back of her mind. And when Hades locks her into a deathly contract, Orpheus is left with no choice but to travel across the River Styx to rescue her.

“It’s a sad tale; it’s a tragedy,” Hermes alerts us from the outset, one that will be sung again and again in an eternal bid to overcome the forces of darkness. The contemporary resonance of those forces will be lost on no one, with a despotic billionaire driving a relentless industrial cycle that has a direct impact on climate change, while building a wall to keep out an enemy he identifies as poverty. The powerful anthem that closes Act I, “Why We Build the Wall,” dates back to Mitchell’s original seed version of the piece, long before Donald Trump started making wild campaign promises. But the thematic currency is uncanny. The political undertones continue when Orpheus eventually makes it to Hadestown and inspires a resistance movement. 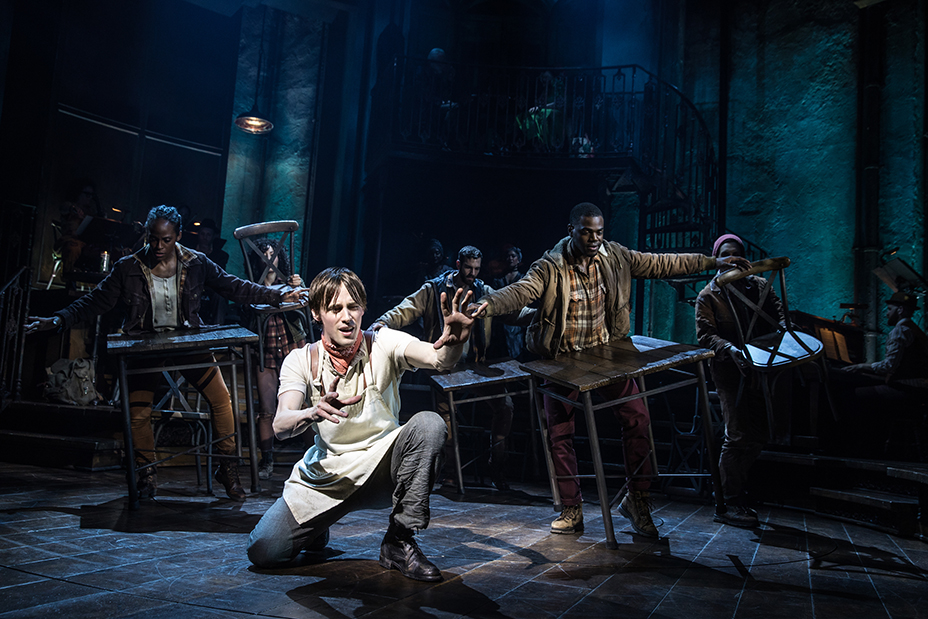 Chavkin and her ingenious design team — sets are by Rachel Hauck, costumes by Michael Krass and the breathtaking lighting by Bradley King — reference Metropolis in their conception of the Underworld. Down below the wrought-iron balcony from which Hades presides, grease-smeared workers in miners’ flashlight helmets and leather overalls trudge around a double turntable with a cylindrical elevator at its center, rising out of and sinking into the smoky depths. Hauck and King pull off a stunning coup de théâtre when the set cracks open to reveal the cavernous industrial hellhole, and then closes again with the return to the world above.

Nowhere is the imagery more emotionally haunting and evocative than in Orpheus’ journey back from Hell, freed by Hades on the condition that he never look behind him to ensure that Eurydice is following. As Orpheus drags himself forward, shoulders slumped with fear, Eurydice and the liberated workers continue to appear and disappear in the smoky haze, while the Fates sing “Doubt Comes In,” a song of such needling dissonance it snakes into your head like an obsession.

Given the show’s bold unconventionality, it’s perhaps not so strange that the romantic leads are less compelling than the shady secondary couple or the storyteller figures of Hermes and the Fates. But those characters are gods, after all, so a mere demigod minstrel and a nymph that struck a bad bargain don’t quite measure up. Still, the contrast between Noblezada’s tough self-possession and Carney’s dreamy delicacy should make young audiences swoon for the lovers. Carney doesn’t have the exquisite, Jeff Buckley-style falsetto of Damon Daunno, who can be heard on the off-Broadway recording. But his lighter pop-rock sound and androgynous prettiness lend poignancy to the tragic hero’s destiny, despite it having been told countless times before. 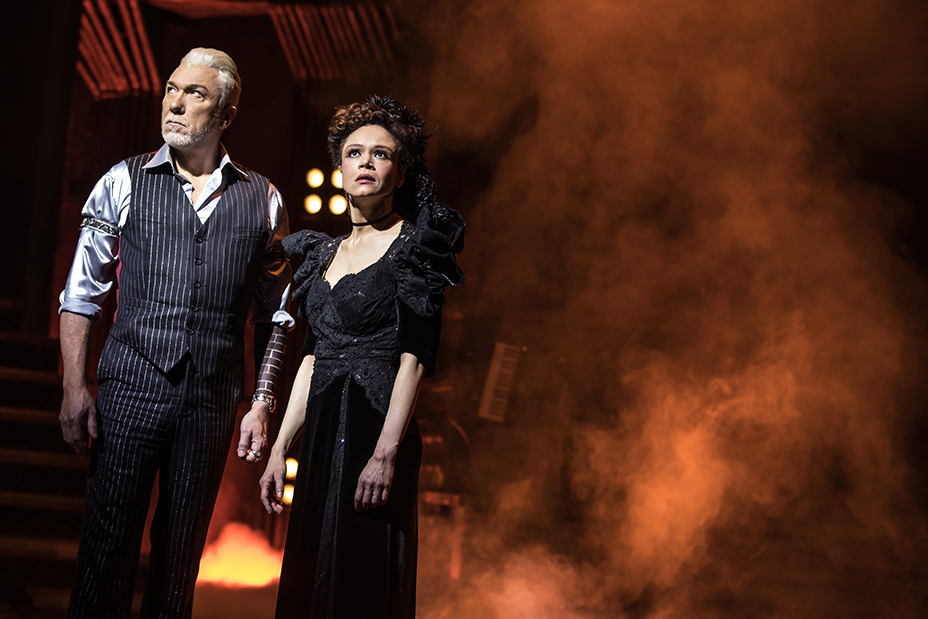 The magnetic stars, however, are Persephone and Hades. The stupendous Gray (so divine in The Great Comet) sashays and shimmies, swigging from her hip flask like a barroom floozy as she revels in the warmth of springtime in “Livin’ It Up on Top.” Or she winks and flirts in “Our Lady of the Underground” like a saucy nightclub entertainer with an insinuating growl, an impression furthered by her introduction of the bandmembers, one by one. And the imposing Page (like Carney, a survivor of Spider-Man: Turn Off the Dark) comes on like a malevolent preacher sharing the gospel of greed — a dapper, silver-haired figure in bespoke pinstripes, cool shades and python boots, intoning Hades’ songs in a basso profondo rumble that recalls Leonard Cohen.

The only feeling that moves Hades is “the music of machinery,” so when Orpheus sings away his hardened cynicism and transports him back to the moment he fell in love with Persephone, we watch this louche pair melt into each other’s arms with a mixture of ecstasy and sorrow — because this is no dewy-eyed fairy tale, and it takes more than a tender moment of rekindled romance to reform a king so corrupted by power.

“It’s a sad song,” Hermes reminds us, reprising his opening number. But even though it ends on a note of desolate loss that lingers through a whimsical coda of folksy fellowship, this spellbinding musical sends you out on a high.