With the Trammps‘ 1976 hit, “Disco Inferno” blaring in the background, London-based but U.S.-born designer Michael Halpern was standing amid racks of his signature sparkly and colorful Halpern creations, which have made him the latest designer everyone has their eyes on as Hollywood’s award season beckons.

Just last week, two of the red carpet’s reigning fashionistas, Lupita Nyong’o and Diane Kruger, donned Halpern’s sizzling glam looks for, respectively, the Los Angles premiere of Star Wars: The Last Jedi and the Manhattan premiere of In the Fade. Both are clients of stylist Micaela Erlanger, whom Halpern mentions he has not even had a chance to meet yet. And earlier this year, no less than Marion Cotillard brought down the Croisette at Cannes, when she was the first to debut one of Halpern‘s designs.

“I think Halpern is one of the most exciting designers of the moment,” Erlanger tells The Hollywood Reporter via email. “He isn’t afraid, and he is pushing the envelope but in a thoughtful and fashion-forward way. His designs are daring, incredibly flattering and all-around cool. Plus, who doesn’t love sparkle.”

Adds Erlanger: “Two other stylist friends have already reached out for his PR contact, I am certain we will be seeing more!” 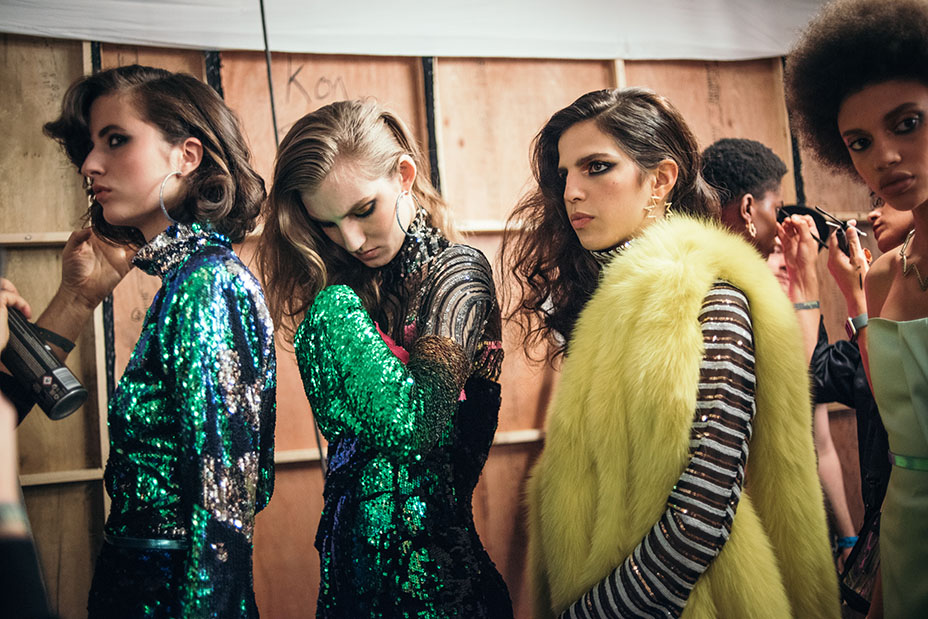 Touching down in New York for a celebratory cocktail party Tuesday evening at Bergdorf Goodman, the designer, 29, was also coming off his double coup at the recent Fashion Awards in London. With a win as British Emerging Talent in Womenswear, he also outfitted model Adwoa Aboah, who picked up the Model of the Year award that night in one of his sequined minis.

Clad in all-black with his cap firmly set on his head, Halpern reflects on that “amazing night” and how happy he was to have dressed Aboah as well, “because she’s so lovely and beautiful.” He’s also friends with some of the other nominees, like Matty Bovan and Natalia Alaverdian from A.W.A.K.E., so it was a warm evening all around. And, he adds, “I’m also a huge Pamela Anderson fan so just to meet her was amazing.”

“He’s kind of a phenom and it happens so rarely,” she says. “There wasn’t even a question about going for it and picking it up. He’s fully resolved already in his aesthetic — it’s playful, it’s jazzy, it’s upbeat.” 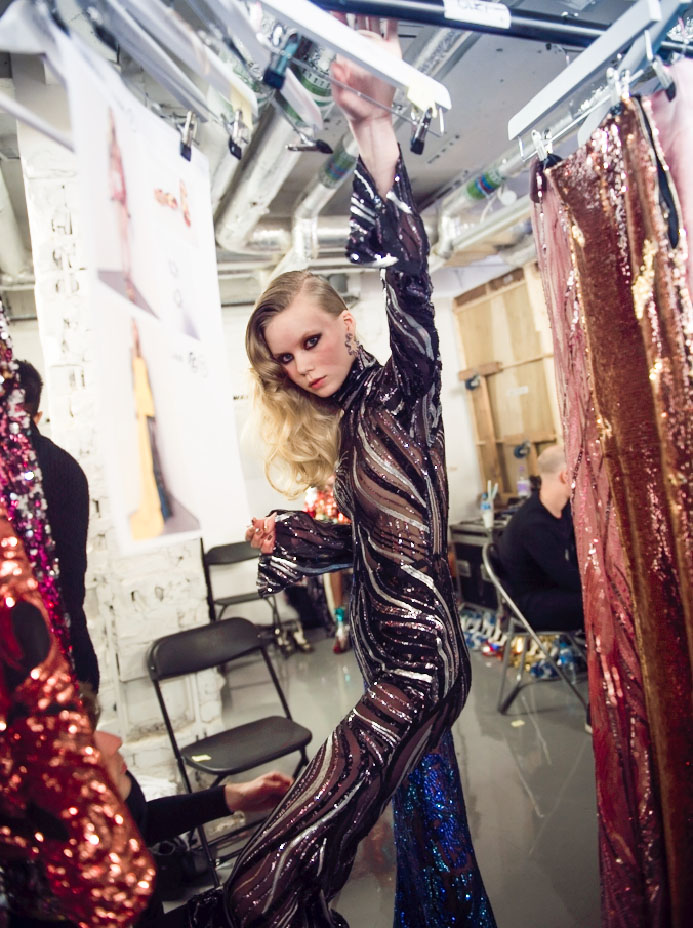 Only in his second season for spring 2018, the Parsons and Central St. Martin’s grad says his inspiration comes from the disco era, when his “super-glamorous” mother, a banker by day, hung out at Studio 54 by night.

“It started with that and hearing her and her friends reminisce about that time and going out and how it was so free and there were no restrictions,” he says. “I think it sort of rubbed off on me and rang true. And I think it’s really appropriate for these days.”

Fargo observes that Halpern’s oft-draped silhouettes, while they touch on the ‘70s, are definitely not any kind of a retread.

“It isn’t retro at all,” she says. “It’s really quite eclectic and kind of wakes up your senses. The shapes — the sculpture — are quite remarkable.” 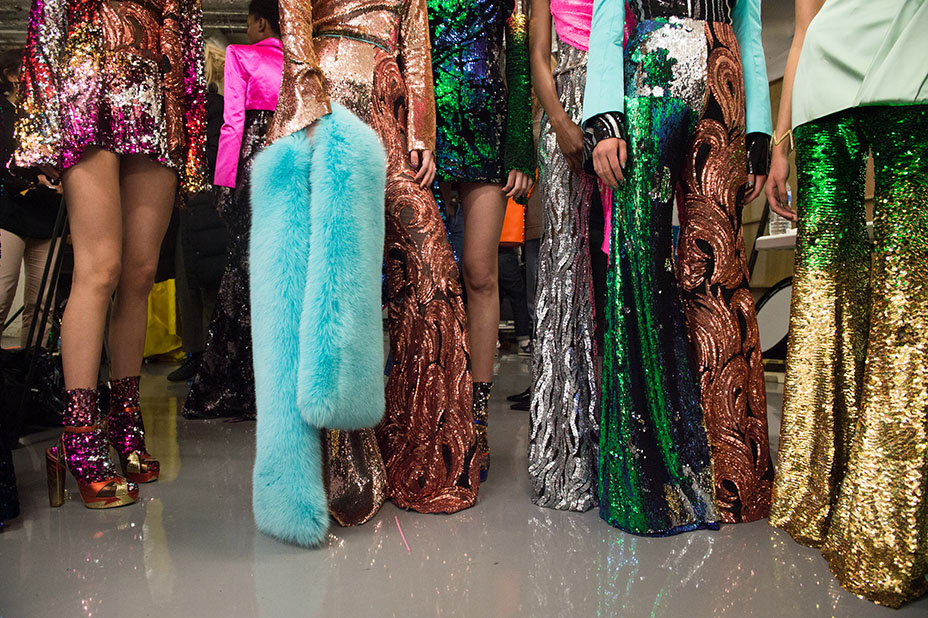 With the announcement of nominations for the Golden Globes and Screen Actors Guild Awards this week, Halpern’s publicist interjects that emails have been flying back and forth already from Los Angeles stylists. Halpern, a native New Yorker who now lives in west London with his Brussels Griffon, Rupert, hasn’t even been to the West Coast, though his wares are also carried at Maxfield.

“We were talking about this, that I’ve actually never been to Los Angeles,” Halpern says. “I think we might have to, maybe not this time. But we might do something for the season, even if I don’t go.”

Fargo muses that Halpern’s designs have also struck a chord because they’re a bit of an antidote to the state of the world right now, a thought that Halpern himself acknowledges.

“I think so much now is really somber and dark and that’s not how I would react to current events,” he says. “I would go in the exact opposite direction and try to do something really colorful and glamorous and shiny. A little bit of escapism to deal with all the sad things that are happening.” 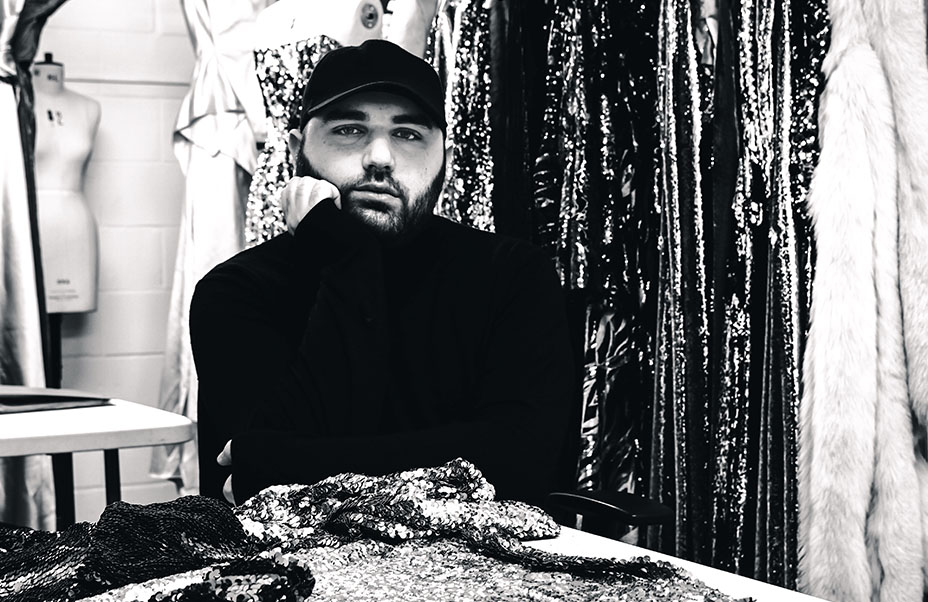