David Korins once spent $149 on a lever doorknob.

It was 2004 and the Tony-nominated set designer — one of the most in-demand talents on Broadway and beyond through his David Korins Design — was mounting a new production at his then-fledgling “off, off, off Broadway” Edge Theatre Company. The play included a hospital room and he knew, even back then, how necessary authenticity was onstage. Despite a thirsty wallet, Korins broke the budget and bought the piece. “I couldn’t believe that we were buying a $149 doorknob. I felt like I arrived as a designer to put that kind of detail in,” he remembered. “No one ever knew or cared. It didn’t matter.” Until it did.

One night during an intermission, an audience member exclaimed, “Doorknob!” to Korins, who was slinging drinks behind the bar. (As a principal in a DIY company, he often found himself selling tickets and bartending while managing the entire production with his partner Carolyn Canter.) “The one guy got the doorknob, and for him it was an amazingly specific detail,” Korins noted. “There are obvious and overt things that we do in design in creating an environment…. It’s about trying to curate individual experiences that probably no one will ever see except for that one guy.”

Korins recalled the vintage tale while seated front and center of a NeueHouse Hollywood screening room Wednesday night, alongside Hamilton director Thomas Kail. Throughout the chat, which comes just days before Hamilton opens at L.A.’s Pantages Theatre on Aug. 16 and was also attended by Hamilton‘s musical guru Alex Lacamoire, the two recalled many of the intimate discussions they had with Miranda and others involved in bringing Hamilton to the Richard Rodgers Theatre. While not all their stories included doorknobs, the sentiment was always the same: in set design, details translate to authenticity and authenticity creates an unforgettable experience.

But who could forget all of the details that never quite made it to the stage? Fortunately, not Kail and Korins. Part of the fun of Wednesday’s NeueHouse event — part of NeueHouse’s programming for its members and presented with an introduction by Casey Dolkas — was hearing the juicy tidbits about the many potential designs of Hamilton that they “threw against the wall but didn’t stick,” according to Korins. Below is a recap.

• “We designed a whole version of Hamilton that was like a slick, gloss black floor and a metal structure. It was as modern as the music sounded, and the cast was in high-tops. And Lin showed up and was like, ‘I could see how you would get there.’ ” But, no.

• “We did one where the stage was a full piece of parchment and there was a huge quill and I remember talking about the quill being a nautical crow’s nest and the actors would climb up it,” said Korins. “Tommy (Kail) said, ‘Yeah, that’s great but that’s one moment in the show.’ ” With too many moments to mount, they moved on.

• “We also had a version where the whole entire floor was dirt. We knew that the song ‘Burn’ was in the show and I went down the rabbit hole of the four elements. We had earth, water and ‘Burn’ was going to be fire.” That didn’t work, either.

• “There was one version I pitched to Tommy that was a massive footer of a column; a column that was so big and profound in its scale that all you could see was one bump and another curve and potentially the very bottom footing all the way up as if it were a 600-foot column…built as if to say that this is the building of a monument or the building of our country and here we are looking at the scaffolding. (Tommy) did say that our story is not about the people who built our country it’s about the people who built the scaffolding from which the country was built.” Makes sense.

But what did make the final version — which went on to win 11 Tony Awards in 2016 — are many, many details that, like that doorknob, are crucial for an authentic experience, they said.

Said Kail: “There are details in this set that only the actors will see, that only the actors will feel. There are places on this set that one actor might never go, but for someone else that becomes a touchstone. That is all throughout the set. One of the other things I think is indicative of that, if you’ve seen the show…in the top of the second act, the construction has continued from Act One to Act Two. The columns are higher. We have flown in a wall to show that it’s continuing to progress. There is scaffolding on the upstage left wall that was not there (in Act One). I don’t know what the percentage of the audience has ever noticed it, but I what I do know is that they feel it.”

L.A. audiences will have the opportunity to feel what they’re selling through the holidays as Hamilton will run through Dec. 30 at Pantages. 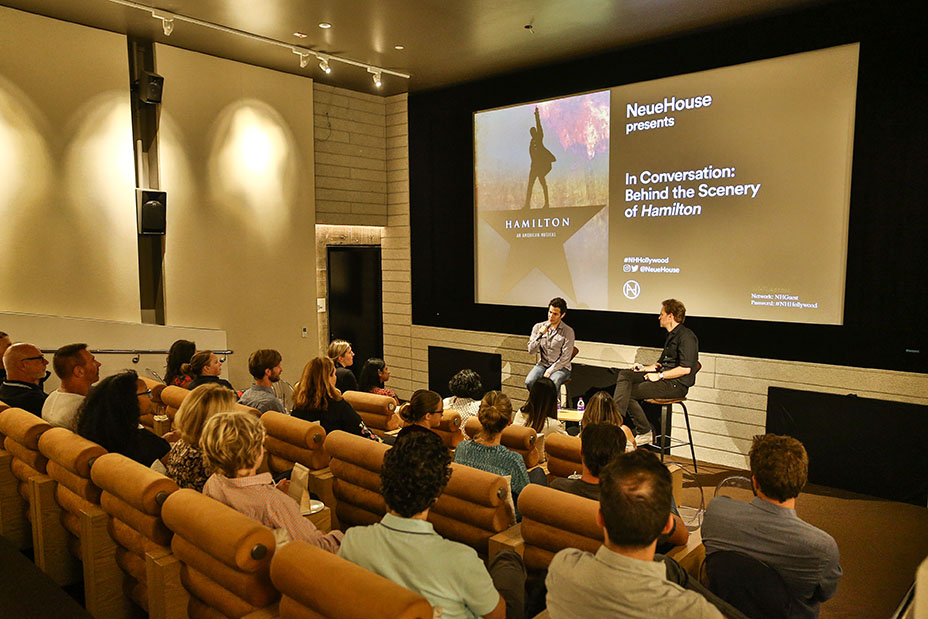