A large part of what makes Ruth Negga such a distinctive screen presence, in films like Loving and Ad Astra, is the emotional transparency she brings to characterizations notable for their meticulous physical composure. There’s no such stillness in her bristling American stage debut, a thrilling plunge into the title role in South African director Yaël Farber’s probing reinvestigation of Hamlet, which skips the expected gender dissection to focus instead on the corrosive anguish of a protagonist torn between the primal urge for vengeance and the intense contemplation that his fierce intelligence demands. The take-home here is not that of a female actor playing Hamlet but simply an extraordinary actor.

Without betraying the stymied essence of Shakespeare’s prince of procrastination, Negga animates his inaction with impassioned feeling that amplifies the tragedy. The incandescent Ethiopian-Irish actress leads an impressive ensemble that is her equal in terms of their natural command of the language and supple modulation of vividly drawn character arcs. That makes this forceful, mesmerizingly atmospheric staging — first seen at the Gate Theatre Dublin in 2018 and now playing a sold-out engagement through March 8 at St. Ann’s Warehouse in Brooklyn — a blistering portrayal of ill-gotten power.

In this new dark age of flagrant misrule, with unscrupulous world leaders surrounded by spineless enablers in decaying institutions, Farber’s lucid interpretation taps into a rich vein of current despair without the need to clobber us over the head by forcing contemporary parallels. 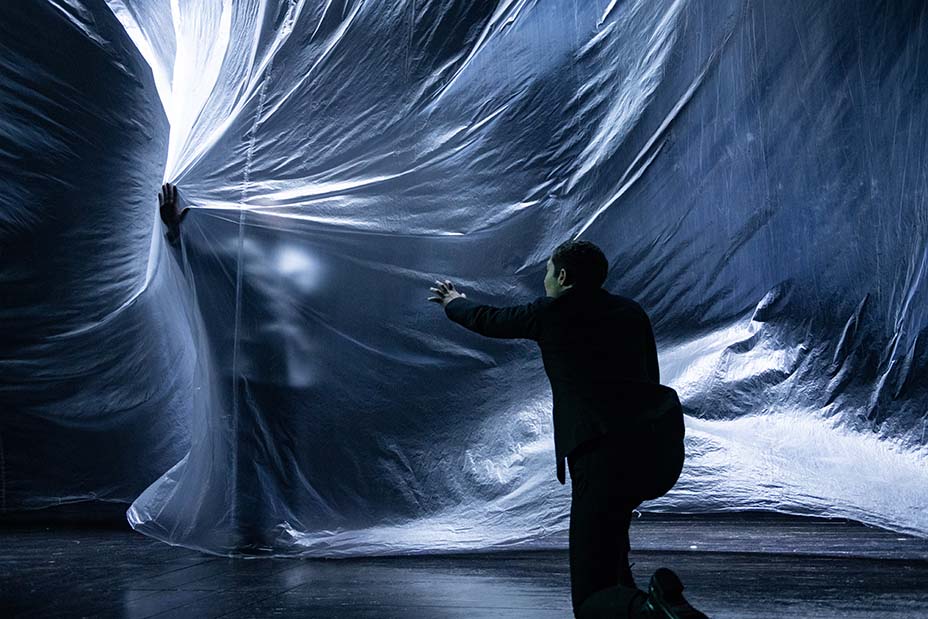 Designer Susan Hilferty’s modern, period-nonspecific costumes evoke an unsettling sense of our own times while her set is a Kafkaesque chamber of heavy black doors upon doors. That airless environment of secrecy and subterfuge is thick with smoke that emanates first from a censer hanging center stage before the play begins and then clogs the sepulchral shafts of John Torres’ expressive lighting throughout. The tightening stranglehold of tension is heightened further still by Tom Lane’s ambient soundscape and cinematic underscoring.

The first impression of Negga’s Hamlet is of a figure of androgynous beauty and boyish vulnerability, his diminutive size compared to all the strapping men around him made more evident in Hilferty’s snug-fitting, cropped-trouser suits. But that physical difference becomes secondary to the prince’s deliberate apartness, maintaining the distance of a solitary young man, raw pain emblazoned in his eyes, but also one who is guarded by nature. That wary isolation makes him automatically a threat to his uncle, Claudius (Owen Roe), who usurped the throne that was rightfully Hamlet’s and married his dead brother’s queen, Gertrude (Fiona Bell), to solidify his power grab.

Farber conveys the fresh wound of Hamlet’s grief by bringing out the corpse of his father draped in a diaphanous shroud. The gurney is wheeled on by three bowler-hatted stagehands, Beckettian figures who echo Ireland’s deep historic connection to Shakespeare. They multitask as the itinerant players performing the play-within-the-play, the gravediggers, and in the case of the lofty Ger Kelly, who sings laments under several scenes, as Death itself, carrying off Aoife Duffin’s heart-wrenching Ophelia. 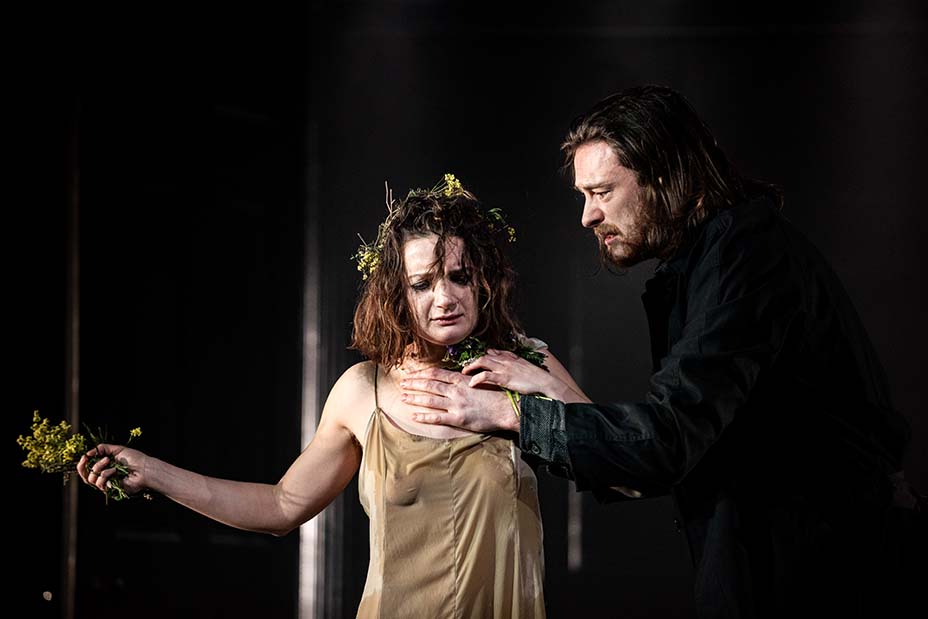 The same material that covers the body of the deceased king serves, in an effect both simple and ethereally beautiful, as an other-worldly curtain between the living and the dead when his Ghost (Steve Hartland) appears to Hamlet on the castle ramparts, revealing how he was poisoned by Claudius. The apparition plants the seed of vengeful justice but also cements the production’s abiding fascination with death, “the undiscovered country,” which lingers in the air like a low-hanging cloud. It’s most chilling in the edited final scene, as the dead re-emerge out of the smoke and Hamlet meets his own demise with a smile as he speaks the closing line: “The rest is silence.” His resistance finally transformed into action, Hamlet appears to welcome his death as the only possible deliverance left to him.

Over the production’s unrelentingly tense, nearly three-and-a-half-hour duration, Negga brings febrile urgency to depressed Hamlet’s existential agony, folding even the most famous speeches into a fluid interrogation of himself as he puzzles over his choices to oppose the treachery making the state of Denmark such a prison. Never losing sight of the prince’s humanity, the actress traces his path from grief to anger, from paralyzing outrage through bitter irony, ingenious plotting and feigned madness to new, more searing desolation when he learns the sad fate of Ophelia.

There’s nothing gimmicky about the casting, and despite some homoerotic flirting between Hamlet and the opportunistic Rosencrantz and Guildernstern (Barry McKiernan, Shane O’Reilly), Negga’s gender becomes mostly immaterial to the performance. Yet the tenderness between Hamlet and Ophelia is more exquisitely wrought than I’ve ever seen it. Their mutual intoxication in early scenes makes them seem like college sweethearts, and Duffin is tremendously moving as she conveys Ophelia’s mounting anxiety over Hamlet’s torment, her hands gently framing his face as he drifts further away from her. 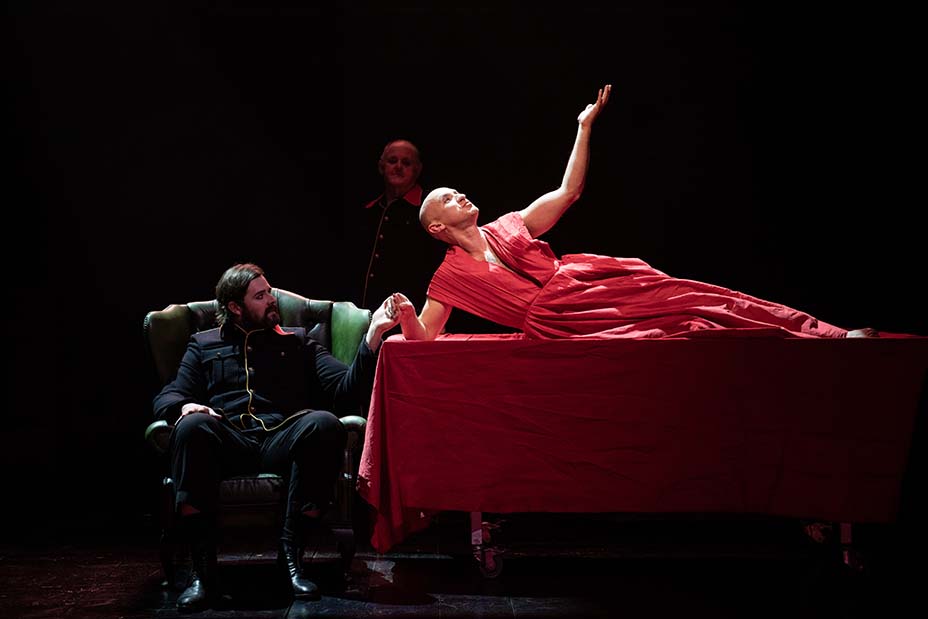 When she’s coerced by her meddling father Polonius (Nick Dunning) into acting as the bait to confirm Hamlet’s suspected insanity, her sorrow is palpable. That continues to reverberate through her genuinely disturbing mad scene, witnessed with lacerating pain by her brother Laertes (Gavin Drea), and on through Gertrude’s haunted account of her drowning. Affectionate family bonds are drawn in the early scenes with Duffin, Drea and the dryly humorous Dunning, all three of them breathing a vaguely contemporary air into their performances that adds poignancy to their inexorable slide into the royal muck.

Farber and her excellent cast ensure that the stakes are always clear, as are the conflicts cleaving many of the characters in two. This is true especially of Bell’s Gertrude, who initially comes off as a frosty power player, a survivor willfully blind to her tough-talking new husband’s corruption and indifferent to her son’s suffering. Her slow, agonized awakening, even as her loyalties remain torn, packs real pathos.

Roe is a formidable Claudius, a scowling bulldog of a man, terrified into a moment of guilty remorse when Hamlet has the traveling players confront him with a dramatized version of his misdeeds (a sometimes snoozy scene that’s both funny and sinister here), but reverting swiftly after to single-minded ruthlessness.

In her lauded Strindberg adaptation set in post-apartheid South Africa, Mies Julie, Farber demonstrated her skill at cranking the kinetic energy until it felt like your viscera were being tied in knots. In her Hamlet, the escalation is quieter but just as deadly. It’s a dark tale unfolding in brooding shadow, beautifully spoken by a cast versed in classical drama but never lured into declamatory stiffness. The casting of a female actor as Hamlet in itself is not all that radical, going as far back as Sarah Siddons and Sarah Bernhardt in the 18th and 19th centuries in what no doubt otherwise were traditional productions. But traditional Shakespeare done well can be riveting, and with Negga’s boldly inhabited protagonist at its molten core, even revelatory. 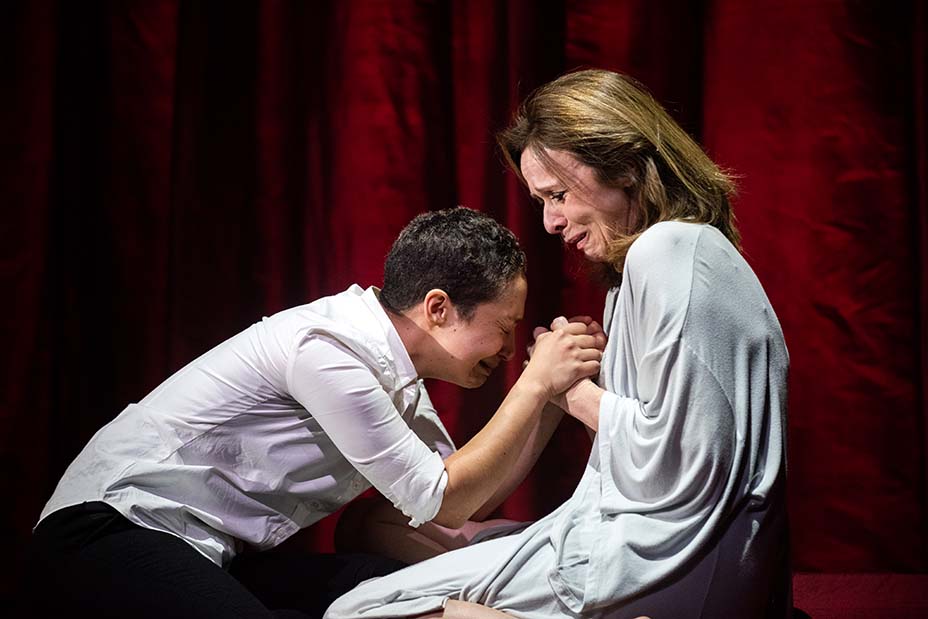