It was kismet that brought together Happy Socks and The Hoff. On top of debuting its first swimwear collection and campaign starring David Hasselhoff in April, the Stockholm-born, newly Los Angeles-based accessories brand has also debuted its first U.S. office and second L.A. outpost within the same colorful space in Silver Lake.

Hasselhoff was in the U.K. in December when he got Happy Socks’ call. “When he got the message, he didn’t really know who we were,” co-founder and creative director Viktor Tell tells The Hollywood Reporter. “There was a big Christmas tree of Happy Socks within Selfridges in London and he [realized], ‘Oh, OK, this is a thing.’ He called us up and he was the greatest. He’s so fun and so nice.”

The nearly one-minute “The Hoff’s Day Off” features the former Baywatch actor and executive producer swapping his infamous red swim trunks for a pair of polka-dotted ones, while washing a bright red vintage Ferrari and sporting a retro “Happy Hoff” tee.

“I was intrigued by the concept and loved the quirkiness of it all,” Hasselhoff says in a statement. “It all just clicked — the location, the set. I’ve spent a lot of time at the beach; being in the sun and by the water is home to me.” As for his favorite Happy Socks swimwear pattern? “The dots are the best.”

Of Hasselhoff’s campy performance, the end result was a mix of “some scripted one-liners” and improvisation. “He came up with all of these crazy lines and he just kept on going,” says Tell. “We had the best time on shoot. We want to have fun with what we do all the time, and this was really one of the fun ones.”

After spending nearly half their time in the U.S. over the last five years, Tell and co-founder-president Mikael Söderlindh relocated from their native Sweden to L.A. last summer, bringing part of the company with them. Tell settled in not far from the Silver Lake shop, while Söderlindh and his family laid down roots along the coast. (The brand’s design atelier is still based in Stockholm.) 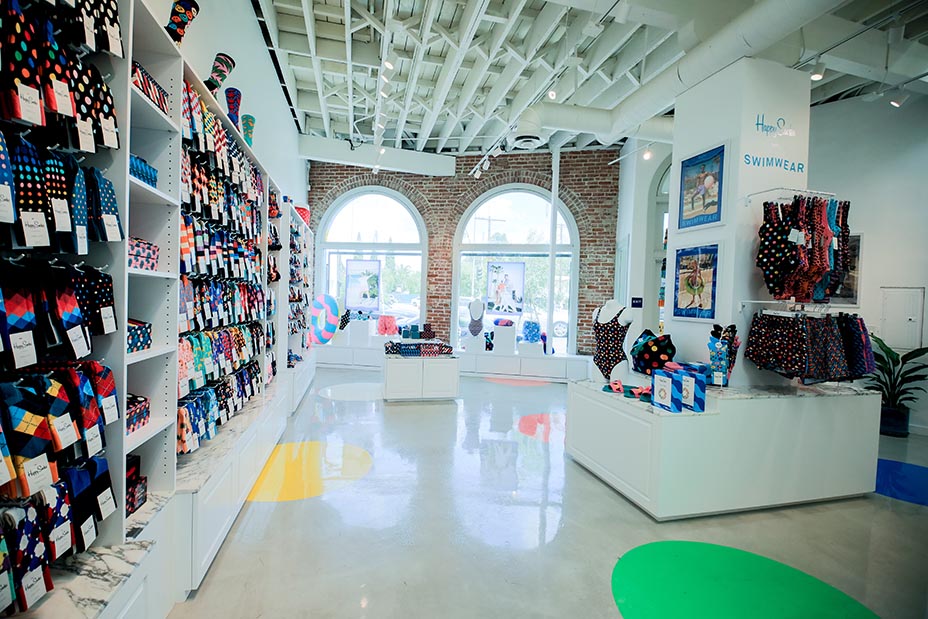 The playful brand’s 1,500-square-foot boutique officially opened last Wednesday in Silver Lake at the hipster haven’s buzzing intersection of Sunset Junction. Painted on the bricked façade is an eye-popping mural inspired by Happy Socks’ signature quirky prints, while the inside stocks the brand’s entire range of socks for women, men and kids ($6 to $22 and up) as well as its recent Rolling Stones collaboration and an exclusive L.A. gift box set. Also on offer is women’s and men’s underwear alongside the just-launched collection of one-piece swimsuits ($75), swim trunks ($65) and beach accessories ($28 to $65), including print-tastic towels, pool sliders and inflatable floats.

Tucked away behind a bright pink off-kilter door is the Scandinavian company’s first Stateside creative hub, dubbed “The Rabbit Hole” for its Alice in Wonderland-inspired entrance. On top of hosting brainstorming sessions, the office will serve a convenient West Coast meeting spot with collaborators, says Tell. (The company’s first L.A. store opened in Venice on Abbot Kinney Boulevard in 2015; it also has three locations in New York.) 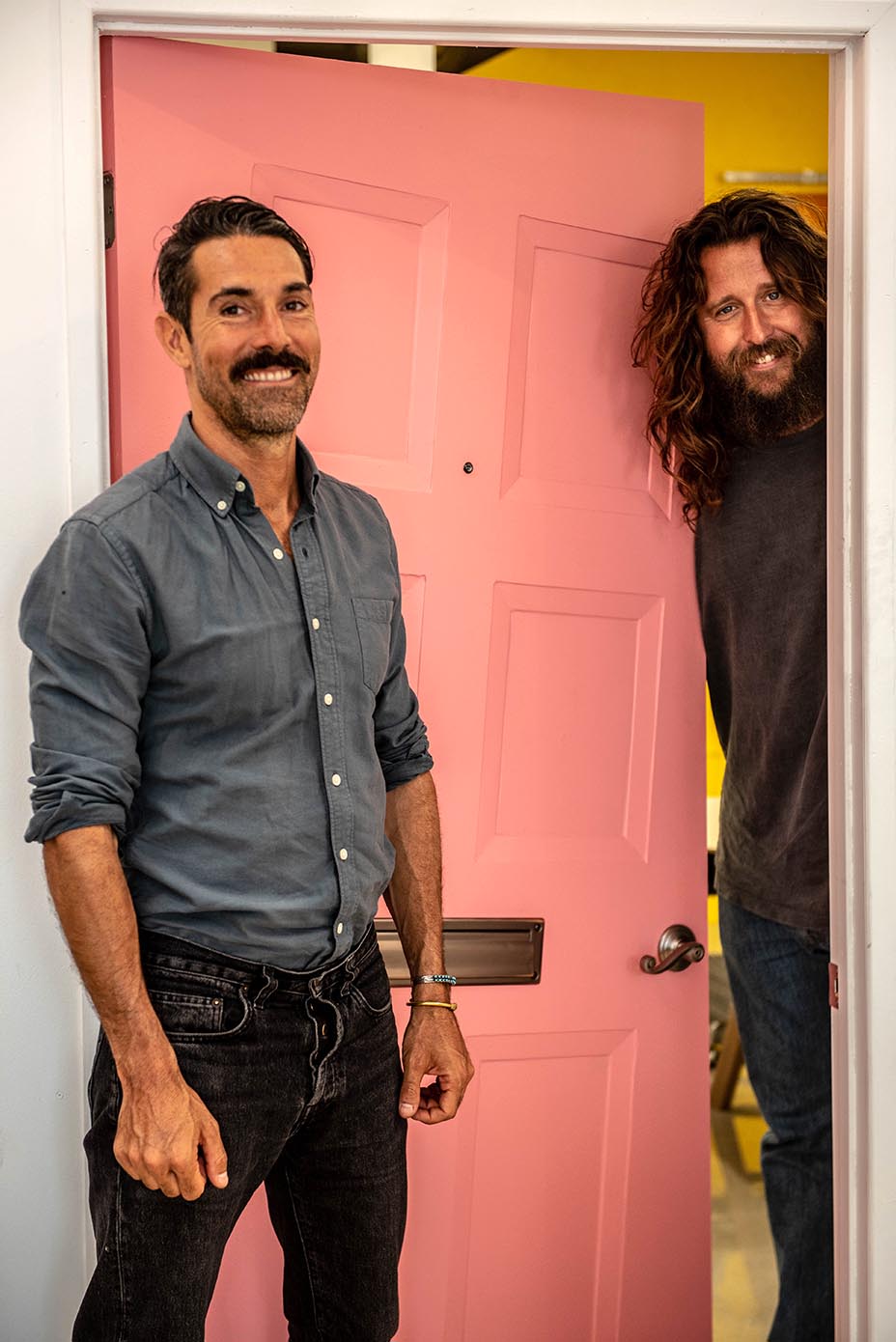 “We’ve been coming here quite often to do different photo shoots or collaborations. There’s really been a change in the last five years that I’ve been coming here,” says Tell, citing L.A.’s rising status in the worlds of fashion and art. “A lot of work we do were with people who were here already, so [the move] made a lot of sense. We really want to focus on the U.S. because it’s a big market for us, and also it’s just sunny L.A. — so [we’re a bit] selfish.”

While the brand’s splash into water-ready apparel won’t be sparking a name change, Happy Socks does plan on stepping foot into more L.A. neighborhoods. A store at Westfield Century City is in the works, and Tell says that he and Söderlindh are also eyeing potential spaces for a fourth L.A. store.

Another reason why the cheerful company is happy to have its feet firmly planted in the City of Angels? “With us being here, we can do more local collaborations as well. If we meet someone today and say, ‘Wanna do something together?,’ we can make it happen. I think the Silver Lake store will be a place for many exclusive things in the coming year.”