Talk about a fashion bombshell. Hedi Slimane, the designer who helped shift the industry’s sphere of influence to Los Angeles in 2012 by setting up his studio there during his time leading the famed French fashion house of Saint Laurent, has a new gig: He’s been appointed the artistic, creative and image director of the French house of Celine, and will direct all collections, including introducing launching men’s wear, couture and fragrances.

He replaces the influential female designer Phoebe Philo, who in her 10 years at the house of Celine put Joan Didion and other brainy women in ad campaigns, helped kick off the comfy shoe revolution by showing Vans-like slip-ons and furry Birkenstock-style sandals on the runway, and made must-have, minimalist and no-nonsense handbags, jackets and coats beloved by everyone from executives to stars, from Veep’s Selena Meyer to Zoe Kravitz.

The move comes two years after Slimane parted ways with Saint Laurent (and parent company Kering in 2016), where he managed to bottle the rock ‘n’ roll vibe of Chateau Marmont-haunting Hollywood denizens into an edgy aesthetic that sent profits soaring. Before he left, Slimane presented his fall 2016 Saint Laurent runway show at the Hollywood Palladium, a love song to Los Angeles, his adopted home, and a swan song for his adoring L.A. fan club (with Justin Bieber, Lady Gaga and Ellen DeGeneres in the front row). 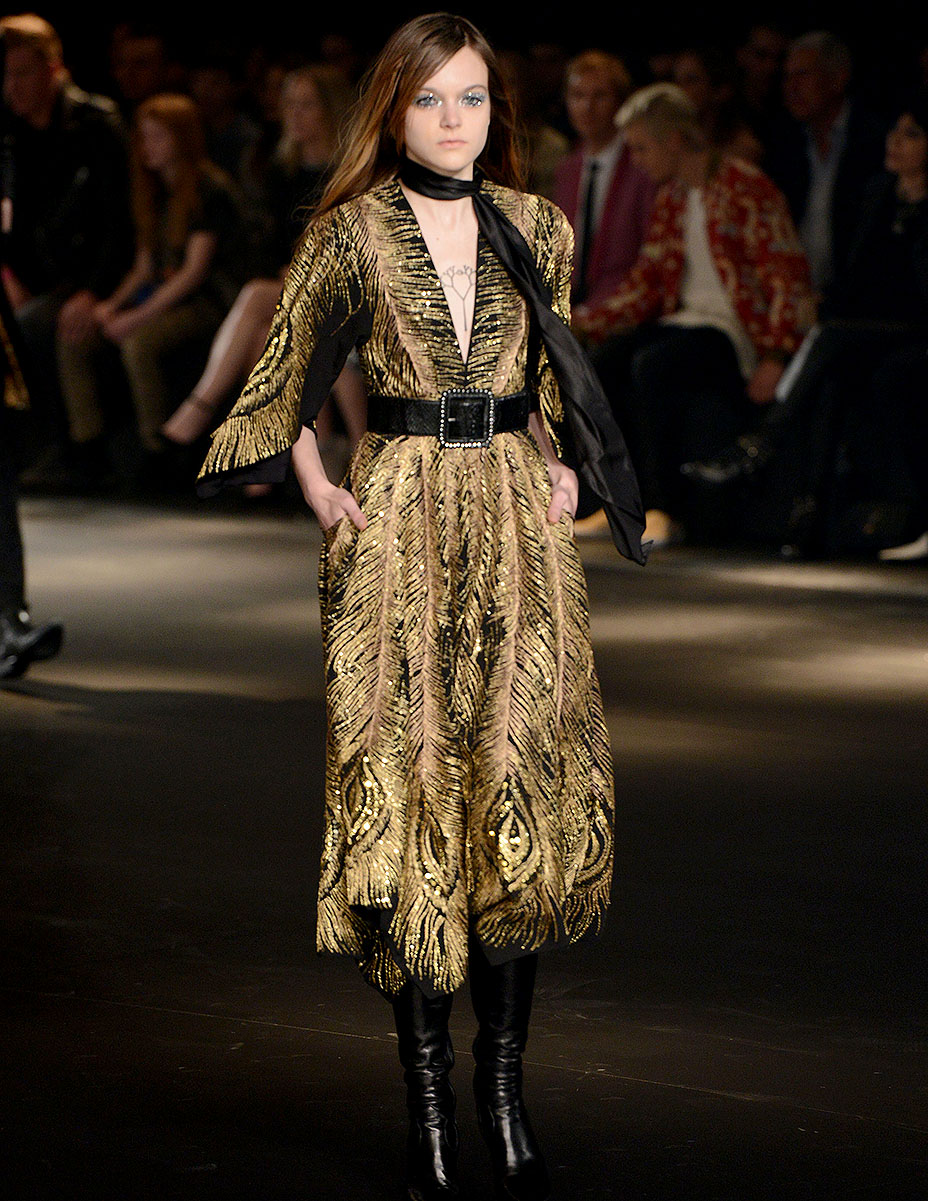 As a creative at Saint Laurent from 2012 to 2016, Slimane wrapped his arms around Los Angeles, drawing inspiration from surf and skate culture and rock ‘n’ roll grit in equal measure. (He regularly cast models himself off the streets and boardwalks, often photographing them for ad campaigns himself.) And even when critics questioned his designs, including floaty ladies-of-the-canyon maxi dresses, fringed boots and sunset-printed sneakers, L.A.’s stylish set including Cindy Crawford, florist Eric Buterbaugh, jewelry designer Jennifer Meyer, handbag designer Clare Vivier and more ate them up. One would assume at Celine, Slimane will continue to be influenced by L.A., where he still lives.

Slimane also embraced young Hollywood in his work at Saint Laurent, including next-gen celebs Dylan Brosnan (son of Keely Shaye Smith and Pierce Brosnan), Dylan Lee (son of Pamela Anderson and Tommy Lee), Jack Kilmer (son of Joanne Whalley and Val Kilmer) and Lucia Santina Ribisi (daughter of Giovanni Ribisi), all of whom modeled in his shows and campaigns. Before that, from 2000 to 2007, Slimane was creative director of LVMH-owned Dior Homme, where he created a new slim-line aesthetic for men’s wear that was embraced by pop stars David Bowie, Mick Jagger and Justin Timberlake. 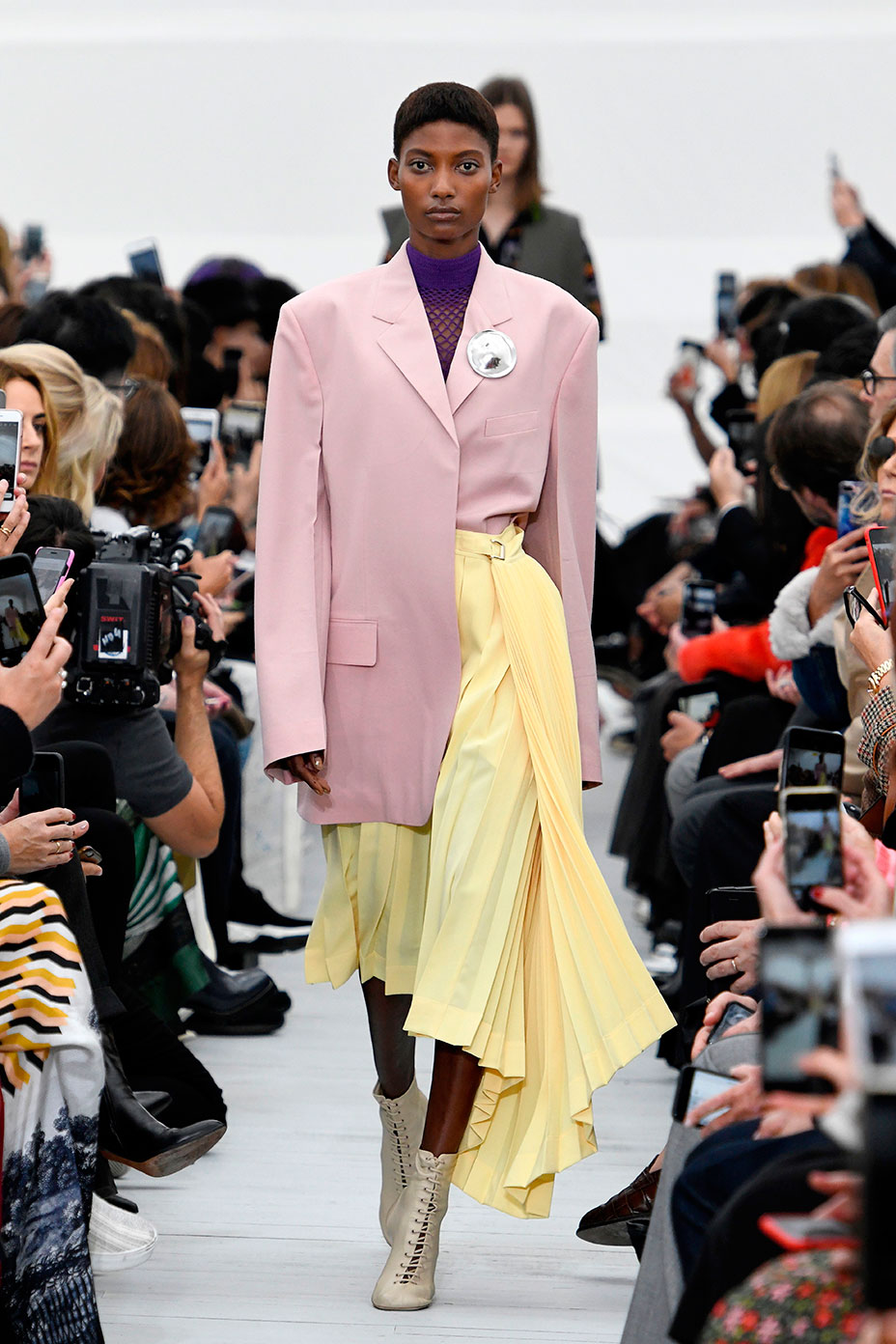 Slimane’s appointment at Celine — a house revived under a fiercely female designer who seemed to be cheering for women even before the dawn of the #MeToo movement (Philo showed nipple brooches for spring 2018, for God’s sake) — may seem a bit of an about-face. But where Slimane goes, the Hollywood spotlight follows, and no doubt his bosses at LVMH are thrilled, especially to be taking him after rival luxury conglomerate Kering let him go, and to be giving Kering’s Hollywood-loved Gucci brand a run for its money.

“I am particularly happy that Hedi is back within the LVMH Group and taking the reins of our Céline Maison,” LVMH CEO Bernard Arnault said in a statement. “He is one of the most talented designers of our time. I have been a great admirer of his work since we collaborated on Dior Homme, which he launched to global critical acclaim in the 2000s. His arrival at Celine reinforces the great ambitions that LVMH has for this Maison. Hedi will oversee and develop all creativity for both women’s and men’s fashion, but also for leather goods, accessories and fragrances. He will leverage his global vision and unique aesthetic virtuosity in further building an iconic French Maison.”

Said Slimane: “I am delighted to join Bernard Arnault in this all-embracing and fascinating mission for Celine. I greatly look forward to returning to the exciting world of fashion and the dynamism of the ateliers.”

Added Sidney Toledano, chairman and CEO of LVMH Fashion Group: “Hedi Slimane is an exceptional designer, complete artist and passionate about his work. I am certain that he will bring his renowned creative energy and discipline to lead Celine to ever greater success.”

Slimane’s first show for Celine will be in September in Paris.