The merciless forces of dementia, anxiety and depression, respectively, torment the protagonists of Florian Zeller’s family trilogy, The Father, The Mother and The Son, intricate dramatic puzzles in which the French playwright deftly drops the audience inside the confusion of his characters’ heads. All those states of psychological distress exert their cruel influence in The Height of the Storm. If the author’s bag of tricks is becoming familiar and the wispy drama is too fragmented to be fully satisfying, the commanding performances of Jonathan Pryce and Eileen Atkins and the meticulous direction of Jonathan Kent nonetheless make this an affecting elegy.

Like all of Zeller’s recent works that have found success in London and New York, this one is translated into English by Christopher Hampton, who again shows a firm grasp of the writer’s disorienting rhythms, with his nervy shifts in time and reality. The dialogue is full of broken sentences, incomplete thoughts and cryptic allusions that reveal a debt to Pinter, as does the artful use of misdirection to keep the audience on its toes. From the start, it’s clear that one half of the elderly couple on stage has died recently, but clarity as to which of them is withheld until well into the play.

The new drama is something of a companion piece to The Father, which won Frank Langella his fourth Tony Award in its 2016 Broadway production. Both works revolve around a once-formidable intellectual named Andre with two adult daughters, whose mind is steadily surrendering to cognitive failure. In the case of Pryce’s character, he’s a celebrated author who relocated from Paris to the French provinces with his wife of 50 years, Madeleine (Atkins).

The troubled look etched across Andre’s face speaks volumes in the opening scene as he gazes out the kitchen window of designer Anthony Ward’s high-ceilinged, book-lined home, with Hugh Vanstone’s exquisitely natural semblance of soft morning light washing over the room. Dressed in the baggy cords, cardigan and linen shirt that are the standard uniform of the man of letters in decline, Pryce is often shattering, his hands trembling as he lurches from forced joviality into sputtering displays of rage or abject panic. “What is my position?” he shouts bitterly, over and over again, in one particularly anguished moment; the sense of a man who no longer recognizes his place in the world cuts deep. 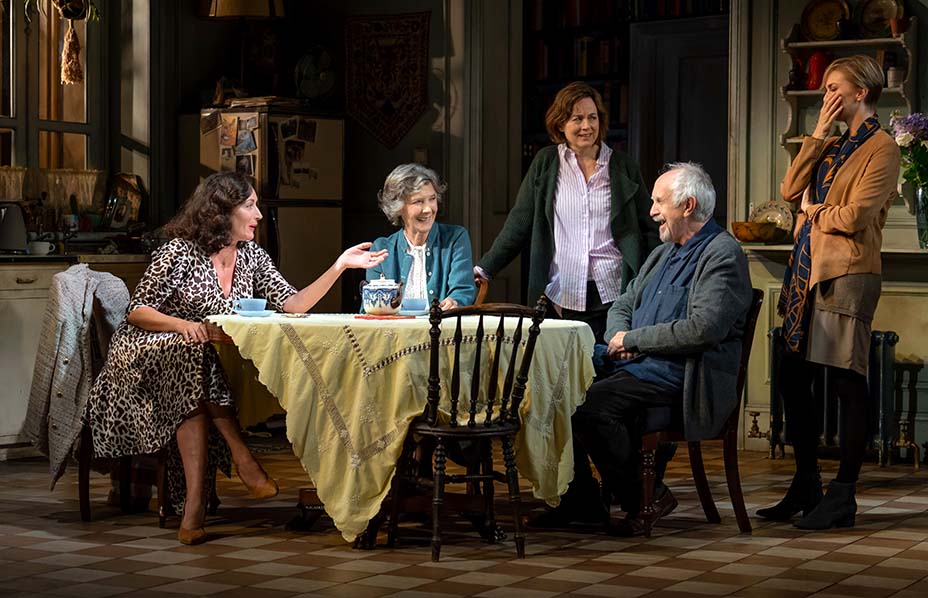 But if Zeller’s family triptych is dominated by the singular figure in each title, his new play is most profoundly moving in its portrait of marriage as a two-person fortress, a safe harbor from the ravages of age and incapacity in which any outside intrusion is a threat.

Even before Andre’s mind began slipping, it’s clear from Atkins’ ineffably grounded characterization that Madeleine was always the backbone of the couple. “I’m not going to let you down,” she says reassuringly, as Andre frets over the prospect of her predeceasing him. “You know very well I’m not the kind of person who doesn’t keep her promises.”

Watching Atkins’ shoulders tense as Andre and Madeleine’s concerned daughter Anne (Amanda Drew) dances around the idea of “other solutions” for her father, the older woman’s hyper-protective sense of violation is ferocious. It’s an aggressive response that many people with aging parents who cling to their independence will recognize. “When I need you, I’ll send for you!” Madeleine snaps at her. “In the meantime, fuck off!”

With brisk economy, the invaluable Atkins layers sharp character insights into Madeleine’s acerbic comment that she finds flowers “sinister,” causing her to throw out all their vases, or her casual dismissal of the taste in men of her flightier, more self-absorbed daughter, Elise (Lisa O’Hare): “I wonder where she digs them up…”

Anne’s seemingly well-intentioned efforts to be helpful cause Andre to bristle for other reasons as she starts sifting through his papers at the urging of his editor, with a view to publishing his diaries and unfinished pieces. She mentions inviting around a real estate broker to look at possibly selling the house, an unwelcome idea that festers when Elise introduces her new boyfriend (James Hillier), who happens to be in that profession. 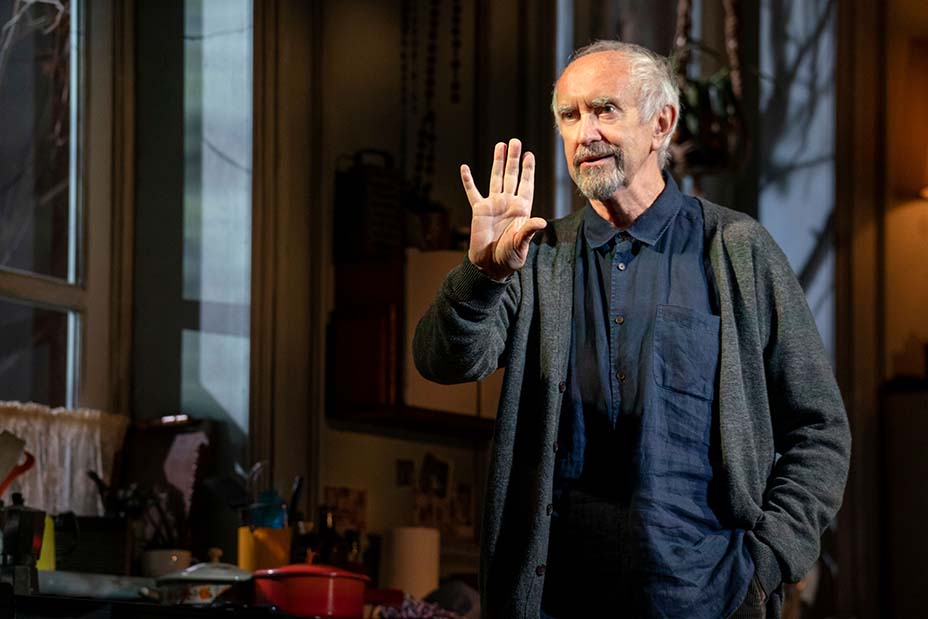 Zeller is a dexterous writer who subtly blurs Andre’s uncertainty with the audience’s throughout, planting seeds of paranoia invariably rooted in truths. Fragments of the past surface also through the appearance of a woman (Lucy Cohu) from Andre’s younger years, whose recollections of a sexual relationship that continued after he was married, and an illegitimate son, prove quite confronting for the family — or whichever of its members are present at the time, depending how you read the playwright’s obfuscation.

The enigmatic woman, whose name nobody can ever quite nail down, is a quintessential Zeller figure, an unreliable narrator within a play about an unreliable narrator, whose motives remain tantalizingly unclear. Cohu gives her a self-assured sophistication but also offsets her warmth with intriguing hints of malicious score-settling, the latter aspect amplified by the silent, lurking presence of Hillier in her scenes, presumably representing the unnamed son.

Pryce makes Andre’s mounting dismay, as he struggles to comprehend who this woman is and what she’s talking about, quite wrenching. He plays the precariousness of a man lost in fog, but not so lost he can escape the feeling of his secrets being exposed.

Without giving too much away, the play is at its most emotionally piercing when it explores the ways in which death rips the ground out from under the surviving partner in a marriage. That sorrow resonates in the mournful strings of Gary Yershon’s scene-transition music and in the shadowy veils of Vanstone’s lighting, which can instantaneously shroud characters with uncanny precision. The compassionate yet pragmatic Madeleine says of the end: “It can only be a deliverance.” But in Zeller’s intimate observation, mortality is also a gateway to memory becoming a final consoling companion.