You feel a distinct sense of occasion stepping into the Shubert Theatre these days, evident in the buzzing sound of the audience before the plush red velvet curtain rises, and then turned up a few notches in the effusive round of applause as the orchestra strikes up the first notes of the title song in the brassy overture to Hello, Dolly! But that’s nothing compared to the show-stopping outpouring of ecstasy that greets the inimitable star, Bette Midler, when she makes her sly surprise entrance on a trolley car.

The rapture reaches its zenith midway through the second act, when Midler descends the staircase of the Harmonia Gardens restaurant, resplendent in red, an arrival celebrated by the waiters and kitchen staff onstage with a jubilation that directly corresponds to the feeling in the auditorium. As for the curtain call, it brings a roar of approval that warms the heart.

I can’t recall the last time I felt a crowd so frothed up with excitement at a Broadway show, and certainly in those terms, no production currently playing in New York can touch this perfectly upholstered revival of the indestructible 1964 musical chestnut. What’s more astonishing is that the enthusiasm never wanes, sending wave upon wave of love across the footlights for two and a half vigorously entertaining hours. And in a testament to the spirit of the veteran showbiz troupers who are now a vanishing breed, Midler soaks it up like a heat-seeking beacon and then beams it right back out into the house.

As Miss M.’s first musical-theater role on Broadway since playing Tzeitel in Fiddler on the Roof in the late ‘60s, she couldn’t have made a better choice than Dolly Gallagher Levi. This is a part that demands an outsize force of nature, and anyone who complains that there’s as much self-caricature as character is missing the point. Every legendary stage Dolly, whether it’s Ethel Merman or Pearl Bailey, was essentially playing herself playing Dolly, and the woman most indelibly associated with the role, Carol Channing, never really played anyone but Carol Channing.

So sure, there’s a lot of Midler in the characterization, along with an echo of her longtime alter ego Sophie Tucker. But there’s also a twinkly eyed, big-hearted, shamelessly crafty matchmaker in late 19th-century New York, whose tenderness is right there for all the world — or all the world inside the Shubert Theatre that could snag a ticket — to see when Dolly steps downstage center to ask her late husband Ephraim to let her go. Midler’s voice remains full of light and warmth and personality, and when she wraps her pipes around “Before the Parade Passes By,” you’re drawn right into this spirited widow’s need to take another shot at life and love. That’s partly the gift of a great musical role but also the singular ability of Midler to sustain an intimate rapport with her audience.

The good news is that director Jerry Zaks‘ production, in which he and choreographer Warren Carlyle pay adoring homage to Gower Champion’s original staging, matches Midler’s life-giving work every step of the way. That goes for the gorgeous designs of Santo Loquasto, with their quaint painted backcloths conjuring yesteryear in New York and suburban Yonkers, and period costumes full of wit and fantasy; to the candy kiss of Natasha Katz’s lighting; and the lush sounds of Larry Hochman’s orchestrations, doing full justice to a Jerry Herman score stuffed to the gills with great songs. 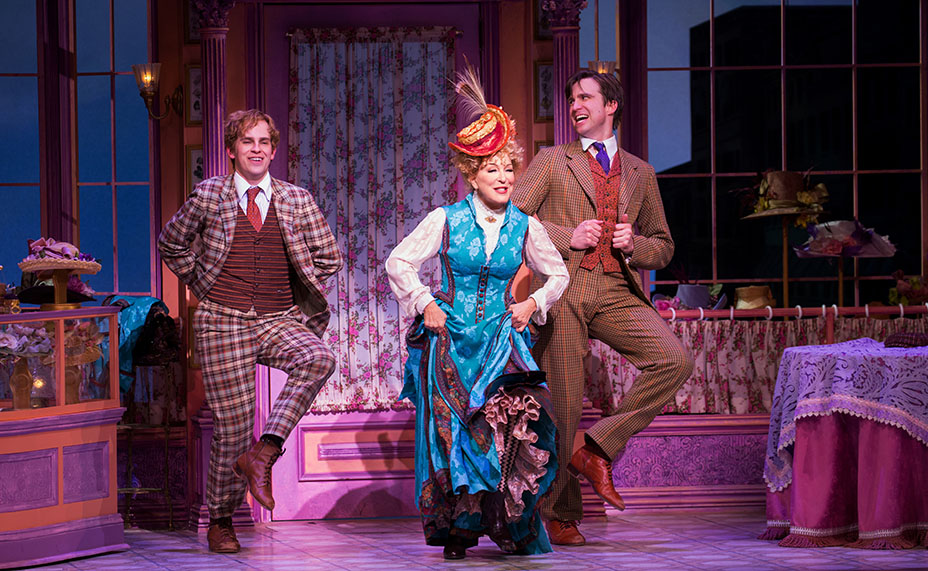 It applies even more to the first-rate cast, with principals and chorus all performing at the top of their game. Among the richest pleasures is the robust comic characterization of David Hyde Pierce as Horace Vandergelder, the curmudgeonly Yonkers hay-and-feed-store owner for whom the ring of the cash register provides soothing relief from the constant stream of fools he’s forced to abide.

There’s an element of homage both to original star David Burns and to Walter Matthau, who played the role in the 1969 movie, in Pierce’s grouchy demeanor and cartoonish, old-timey accent. (“I wouldn’t marry you Dolly Levi if you were the last woman on Oith!”) But there’s also a lovely suppleness to his performance as Horace sputters with flabbergasted disbelief every time Dolly — whose services he has retained to find him a suitable wife, when what he really wants is a housekeeper — commits some fresh outrage. Of course, she’s merely playing him like a wind-up toy, biding her time before reeling him in for herself.

In neither the stage nor the screen version, Michael Stewart’s book, based on the Thornton Wilder play The Matchmaker, makes a particularly convincing case for the sharp pivot in Horace’s feelings, from exasperation to head-over-heels love. But there’s a genuine spark between Midler and Pierce in their wonderful scenes together that helps sell the inevitability of their blissful union. Besides, resistance to Dolly’s chutzpah is futile. It helps, too, that Horace is humanized by the addition of “Penny in My Pocket,” a clever ditty cut during the show’s original out-of-town run, in which he reveals the humble beginnings that preceded his present stature as a “half-millionaire.”

As Horace’s under-appreciated store clerks, Cornelius Hackl and Barnaby Tucker, Gavin Creel and Taylor Trensch make a superb comedic pair, their yearning for excitement and romance quite touching. They’re beautifully matched, respectively, with Kate Baldwin as widowed New York milliner Irene Molloy, and bright newcomer Beanie Feldstein as her shopgirl Minnie Fay. The exploits of this quartet carry as much weight in the plot as Dolly’s scheme to win Horace, and their scenes are a constant delight.

More peripheral to the main action but adding to the fun is Melanie Moore as Horace’s ear-shatteringly unhappy niece Ermengarde; and as Ambrose Kemper, the artist sweetheart her uncle forbids her to marry, Will Burton makes droll use of a beanpole physique that recalls the lanky Tommy Tune in the movie. Rounding out the principals, Jennifer Simard (a comic revelation in the otherwise forgettable Disaster!) is an over-the-top hoot as Ernestina, a trashy friend recruited by Dolly to bamboozle Horace; and Kevin Ligon is suitably pompous as the Harmonia Gardens maitre d’ Rudolph, melting like butter when his favorite customer ends her long absence. 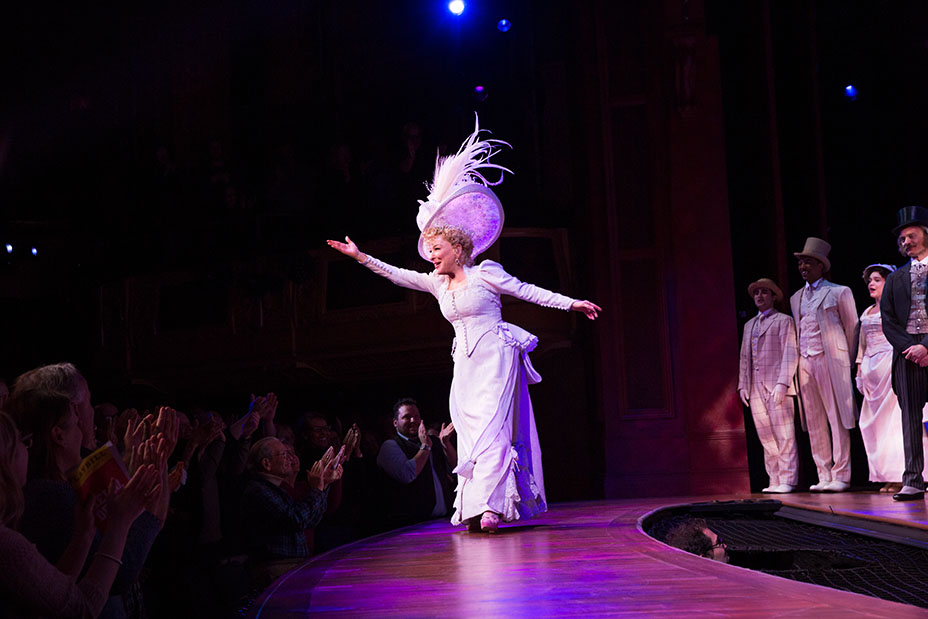 The various romantic pursuits and comic adventures are the stuff of sheer escapism, veering into the farcical when everyone converges at the restaurant and then lands in court following some hoary Keystone Cops-style chaos. But this romp makes an ideal light-hearted frame on which to tack Herman’s hummable numbers — classically styled show-tunes that convey simple ideas in catchy lyrics expressing rousing, relatable sentiments.

The show starts with Dolly’s playful advertisement for her professional meddling, “I Put My Hand In,” during which Midler hikes up her skirts in a frisky sidestep that reveals the first in a series of riotously patterned stockings above her ankle boots. Horace’s “It Takes a Woman” is a funny backhanded tribute that shows the depths of his male chauvinism, performed with marvelous self-serious conviction by Pierce. Creel and Trensch give such a buoyant liftoff to “Put On Your Sunday Clothes” that by the time the gentlefolk start promenading in their finery, flooding the stage with an explosion of Easter-egg color, we’re all airborne.

It wouldn’t be a Jerry Herman musical without a big blustery showstopper or two, and this one has “Before the Parade Passes By,” which builds from Midler’s wistful opening into a citywide salute, with representative groups of firemen, merchants, athletes, opera stars and suffragettes. Then there’s the roof-raising title song, in which Midler and the male ensemble circuit the stage’s passerelle with such exuberance I kept waiting for someone to take a tumble into the orchestra pit. In a show designed for its protagonist repeatedly to break the fourth wall, Midler gets huge laughs with her self-dramatizing displays of exhaustion.

Herman’s quieter numbers are equally winning. The romantic longing and optimism that Baldwin pours with her creamy voice into “Ribbons Down My Back” gives that song a new depth of feeling, making Irene a second-chance soul sister to Dolly. And Creel’s voice has never sounded sweeter than in “It Only Takes a Moment,” a song that, like “Sunday Clothes,” was used to enchanting effect in Pixar’s Wall-E.

Zaks‘ direction is more an act of loving restoration with modifications than an overhaul, but it benefits immeasurably from a cast that takes its cue from the two leads’ expert timing. And Carlyle’s feel for vintage dance numbers finds infectious pleasure in the cheerful strut of “Sunday Clothes” or “Elegance,” as well as the synchronized flurry of “The Waiters’ Gallop.” The debt to Champion is readily acknowledged throughout. It’s a joy to see a book musical with so much fluidly integrated dancing, even if, paradoxically, “Dancing,” in which Dolly conducts an impromptu polka class in Irene’s pretty pink hat shop, is the one number whose staging feels cramped and tentative.

Still, as a shot of sparkling, old-fashioned popular entertainment of a kind largely erased by the age of cynicism, this deluxe revival of Hello, Dolly! is about as good as it gets, crowned by star casting that fits like a glove. If Midler perhaps makes more than a meal out of Dolly’s turkey dinner at the Harmonia Gardens, milking her shtick for all it’s worth, the uproarious response of the audience suggests nobody’s complaining. By the time she vamps and camps through Dolly’s faux-farewell to Horace, “So Long Dearie,” we’re all lifted up on a cloud, begging her to stay.