For the past few years, cannabis has been creeping beyond the tchotchke merch sold at Venice Beach (or the eccentric red cannabis socks that Kristen Stewart donned in 2015). Brands from Bulgari to Viktor & Rolf are now implementing marijuana motifs into their designs, and Moschino’s creative director Jeremy Scott even passed out Sakara Life hemp chocolates to the front row of his New York Fashion Week Show on Friday. So will we soon see weed on the red carpet? 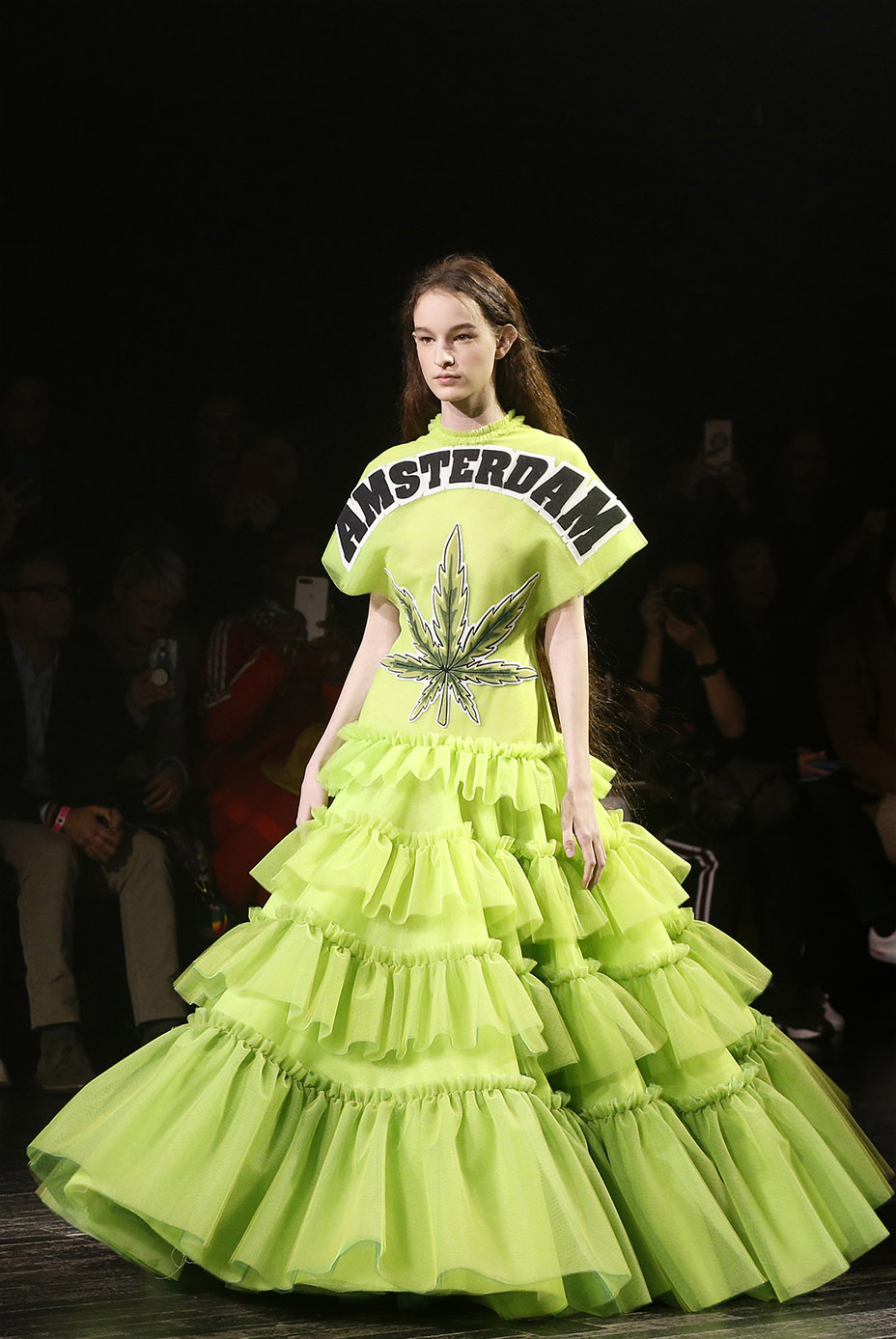 And Bulgari got in the game with an ’80s-inspired necklace, introduced as part of the brand’s Wild Pop High Jewelry collection, crafted of 18-karat gold with marijuana leaves set with pave diamonds. Their website says, “inspired by the recreational use of cannabis, the necklace is a piece of jewelry with a high rate of addiction.”

“The unconventional necklace is an ironic, elegantly risque way to depict the magical effects that enchanted the generation of the ’80s with dreams of escapism,” commentary on the site continues. Bulgari’s more sober jewelry has been seen recently on Lupita Nyong’o, Charlize Theron and KiKi Layne at the Golden Globes.

In September, model Bella Hadid sported another “Happy Leaves” Bulgari necklace set with rubies to a dinner hosted by the jeweler (an emerald version is available to shop).

Last night at my @bulgariofficial family dinner Wearing the newest, my most favorite, “happy leaves” necklace set with rubies too this time around… Bravaaaa @lucia_silvestri

The trend has been evolving for years: Scott turned Adidas’ logo green in 2012 for a sweatshirt worn by rapper A$AP Rocky, and in 2016 Alexander Wang added black-and-white pot designs to mohair skirts and coats. Off the runway, stars such as Miley Cyrus have touted weed merch since the 2010s, including her wild performance in Vancouver, B.C. in 2014 for which she donned a bedazzled cannabis onesie. 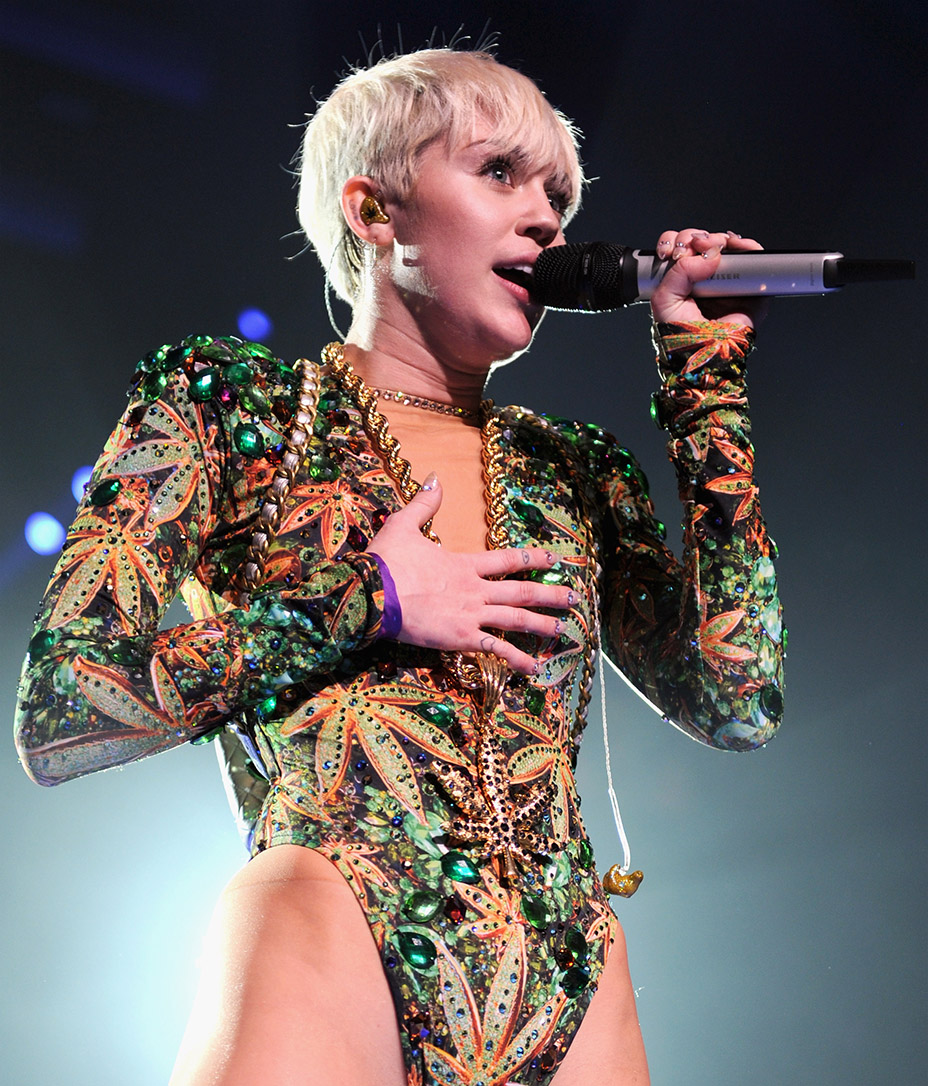 Flash forward to 2018, when recreational cannabis was legalized in California and around $2.5 billion of legal cannabis was sold, according to The New York Times. Stars from Busy Philipps to Sarah Paulson rely on luxe cannabis vendors like Lord Jones, Dosist or Beboe for their high-quality highs. 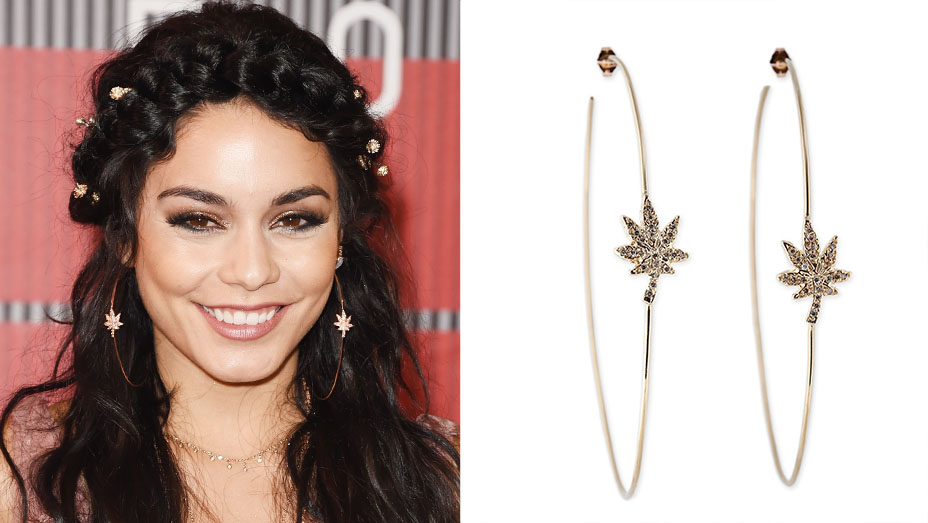 “The marijuana leaf is such a botanical beauty. I see cannabis more as a symbol of happiness and freedom than anything else, and so many people are beginning to see it this way too,” Aiche tells The Hollywood Reporter. “When worn on the red carpet, the glamour of Hollywood gives it an entirely new energy. It gives off this rebellious allure that’s irresistible.”

Though it’s unlikely reigning red carpet queen Lady Gaga — who smokes marijuana in her documentary Five Foot Two — would go so far as to wear the large Viktor & Rolf gown to the Oscars this year, it’s possible cannabis couture could be coming to the red carpet.

Stylist duo Jill and Jordan (clients include Rachel Brosnahan, Kathryn Hahn and Anna Kendrick) posted a photo of Bulgari’s weed necklace on Jan. 30 with the caption, “We wanted to start your day off on a high note w Bulgari.” Star stylist Karla Welch is a fan of both Lord Jones and Viktor & Rolf’s latest couture collection, so will she dare to put a client in their green gown? If Chanel designed a pot line, Stewart might sport it, as a fan of the French house.

As for those concerned parents wondering if Hollywood stars promoting marijuana will send the right message, a new study in the American Psychological Association’s journal Psychology of Popular Media Culture actually reports that surveys did not find clear connections between actors smoking onscreen and teens smoking.

“The correlation between teens watching movies with smoking in them and the actual smoking behaviors is near zero with very little impact,” said Chris Ferguson, professor of psychology at Stetson University, in a statement.

So what’s the harm of wearing a love for cannabis on your sleeve?

Now You Can Buy Designer Cannabis and Creams Alongside Designer Clothing