Continue to The Hollywood Reporter SKIP AD
You will be redirected back to your article in seconds
Skip to main content
February 13, 2019 9:00am

The Feb. 3 death of 1950s screen gem Julie Adams, 92, had obituary writers remembering her greatest film role: playing the love interest of the scaly fish-man who climbed out of a slimy pool in the 1954 horror classic Creature From the Black Lagoon. But what’s been lost to history, until now, is that the makeup artist who created that original creature ­— which, 64 years later, would inspire Guillermo del Toro to make his Oscar-winning The Shape of Water — was Milicent Patrick, the first and still only female to design an iconic movie monster. Infuriatingly, her name was left off the film’s credits, and she never received acknowledgment for her work.

“I was so surprised that she wasn’t mad,” says Mallory O’Meara, 28, whose book on Patrick, The Lady From the Black Lagoon, will be published March 5 by HarperCollins imprint Hanover Square Press. “It took me a long time to forgive her for not being mad. If it had happened to me, my head would have burst into flames. But Milicent took it in stride. In the 1950s, you didn’t say no to men. You didn’t fight back. But I just couldn’t believe she didn’t put up a stink.”

No stinks were raised when The Hollywood Reporter caught up with O’Meara by phone to discuss her debut book, how she tracked down long-buried intel on her heroine, and what she thinks of current cinema — from wolves to Boots Riley. 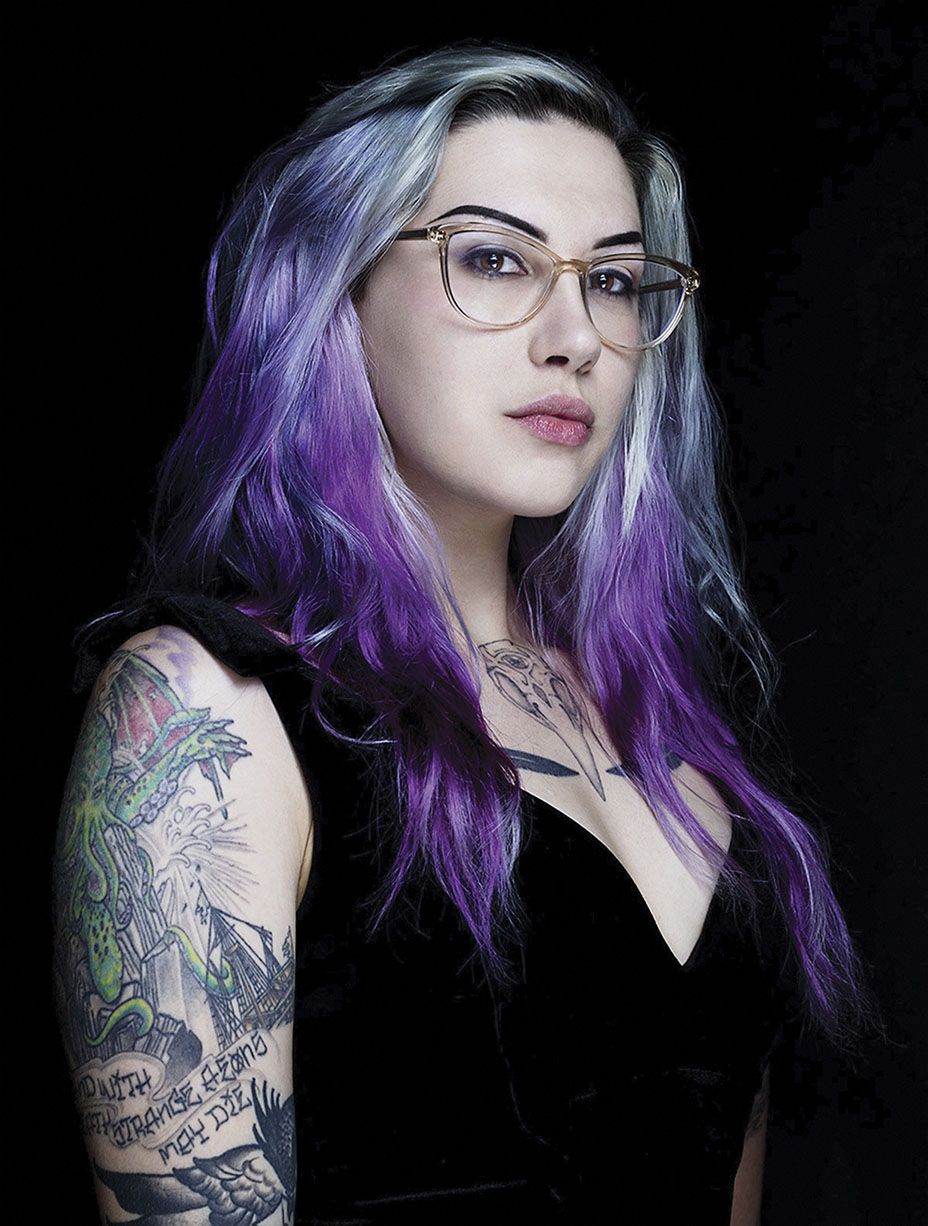 How did you set about researching Milicent Patrick? That couldn’t have been an easy task.

Oh, it was a big combination of nerds and librarians. When you work in the genre community, it’s very, very small. And we all know each other, so I immediately put the word out to a bunch of friends of mine that work at horror production companies and are historians and have been in the genre for a really long time. I also just started going to the library. Little do most people know if you don’t know how to do something, you can ask a librarian. I had to look so many places, but I just sort of started throwing things up against a wall cause I had no idea how to find her. She lived in a time before the internet. The year she died is when IMDb got super-powered by Jeff Bezos. She really existed before any databases, and back then film credits were not what they are now. You couldn’t just look up somebody. I just had to teach myself how to research with the help of the Los Angeles Public Library — and watch lots of nerds.

What was the best source?

Very weird, but the Mormons. I went to the Mormon Temple in Los Angeles on the advice of a friend. In exchange for giving them my information they gave me access to their archives. Geneology.com, Family Tree and Ancestry.com — all these genealogical, family-research websites — are all Mormon. They are so interested in that, and that was how I was able to track down so much of her life. I got her birth certificate. I got her father’s draft papers. All kinds of stuff that I couldn’t even believe. It was like sliding down a rainbow into a bucket of gold coins. It just completely broke my brain open, and I definitely recommend that for anyone who is doing this kind of research.

Both my favorite and least favorite part of this entire endeavor was the research. I am a big reader; I love to read. You essentially have to turn into sort of a research-material wood chipper when you do a project like this. There was a lot of time where I was just going through articles and books, and reading, and reading, and reading, and I hated it at the same time because it was so tedious and it took so long cause Milicent’s life sort of intersects with so much California history and Hollywood history and art history that I had to read up on everything from William Randolph Hearst to Walt Disney. But I loved it at the same because I had this moment where I said, “Wow, reading is finally my job. I have one life. This is great.”

You also have a side gig that is focused on reading, as well, right?

I have a podcast. I do a literary podcast with my friend, actress and filmmaker Brea Grant, every week. We’re on the Maximum Fun podcast network. Every week we talk about reading and reader culture. It is still my favorite thing in the entire world to do, and it is such a big part of my life.

Back to Milicent. It’s still a pretty shocking fact that she was the only woman to have ever designed an iconic movie monster and remains the only one …

Well, it’s so interesting to me because when Milicent worked there weren’t a lot of women working, but if you look now, the percentages haven’t changed that much. The conversation has shifted so dramatically because of #MeToo, and while the conversation has changed, the women who are getting hired hasn’t budged very much in terms of numbers. The problem with a lot of women getting into horror specifically is that you can’t be it unless you see it. Even now, most of the directors are men — white men, specifically. Most of the protagonists are men, most of the people making [movies] are men. So when you’re a teenager like I was, unless you see someone like Milicent, you don’t even think that you can be a director or that you can be a writer, let alone a myriad of other unseen jobs like being a cinematographer or production designer, unless you see it.

How was Milicent able to break down that door?

When she was working at Universal was one of the best times of her life. She worked as an actress for many years, but she also always loved loved loved being a visual artist, and it was something that she got a lot of joy from. Milicent was a person who was always struggling to identify herself, to solidify her identity, to sort of create this persona around herself to give her more confidence and strength. She was estranged from her family, she had a very rocky romantic relationship history, so all she ever really had was herself. So when she was working at Universal, she just had the time of her life — even though she was in a boys’ club, she was super unapologetically feminine. She would march into that very masculine space in her high heels and gorgeous dresses and makeup and pearl earrings and she just absolutely loved it.

Yeah, she was the best. I’m obviously biased but she was just so — it was a big thing for me too because I went through this. When you are a woman who is getting into an industry like the horror industry or even the fandom, you almost try to blend in. You see that it’s all men so you’re like, “Maybe if I act enough like a guy and dress enough like a guy, no one will notice that I’m a woman.” So for a long time when I was a teenager, I was like, “Ugh, Milicent Patrick, she’s great but she’s always dressing like a girl.” Now, I’m like, “How badass is that?”

You also invested your own money into research and writing. How much?

I mean, I’m glad that I did but it definitely, it’s in the thousands. I probably spent at least $5,000 to write this book, maybe more just between all the trips. I had to go up to Hearst Castle twice, all of the research materials, it all really adds up. It was a decision that I had to make because I had to do the research before I could even sell the book, so I just had to do it. I’m glad that I did because even if no one buys a copy of this book, I know what happened to her and that makes it worth it.

You also produce films. What are you working on now in that world?

I have a movie coming out next month actually. We’re hopefully going to make the announcement [soon]. I am a producer for a film company called Dark Dunes Productions and we do all practical special effects movies and we have this live-action puppet movie that coming out. It’s a crystal-y Princess Mononoke kind of film. It has Nathan Fillion, Whoopi Goldberg, George Takei, Abigail Breslin, it has some great voice talent but it’s all live-action puppetry and it’s sort of a sci-fi/fantasy kind of thing, family friendly movie. If that does well, fingers crossed, we do have another live-action monster puppet movie in the works.

What’s your favorite genre of movies?

I’m such a big creature fan but my heart really belongs to werewolves. I’m a big fan of The Wolf Man. I love any werewolf movie. There was a recent one called What Animals Dream that I love. The ’50s were not a super strong time for werewolf movies, that was really the era of, like, sci-fi stuff because we went from being afraid of Europe to being afraid of space and Russians so it was an interesting cultural shift. The Mole People was really, really fun — even some of the sci-fi ones are fun. The Silent Earth is great. But definitely if I had to say my favorite monster movie, my heart belongs to The Wolf Man.

What about more current movies? Favorite film of 2018?

Oh boy, last year was a crazy year for movies. I would have to say, at least horror-wise, my two favorites were probably Hereditary and Sorry to Bother You. When you see the trailer for Sorry to Bother You you don’t realize that it’s a horror movie, but it quickly becomes one and it is one of the most innovative, incredible movies of the past few years.

Are there more books you want to write?

I promised myself I would never write another biography just because I feel like I am the living external hard drive for Milicent Patrick. I’m always carrying her around in my head. But there is a woman who worked on another very famous monster movie that I am putting together a proposal for. I’m working on that, and there’s another feminine and female history subject that I can’t announce — but they’re both in the works. I also have a young adult project that I’m working on that’s about making movies for young girls as well.