It’s very hard for Christian Bale to talk about his 1892-set movie Hostiles without also talking about America under Donald Trump.

“This movie is more relevant than ever, in terms of the absolute, disgusting nature of political whims and taking care of the elite rather than the masses — it’s just frankly stunning in this day and age that we’re having to deal with this.” Bale told The Hollywood Reporter at the movie’s screening on Thursday. “This tax bill, etcetera, this is not what America was built on. I adore this country, it’s my adopted home — I moved here, I left my own country because I love this country so much; my children speak with an American accent. Hopefully we’ll come through this for something far better, but we’re going through real trial right now.”

Directed by Scott Cooper, the Entertainment Studios drama stars Bale as an army captain who reluctantly agrees to escort a dying Cheyenne chief back to tribal lands. During the perilous journey from New Mexico to Montana, the two leaders put each of their racist worldviews aside to overcome common enemies and reach a place of mutual empathy.

“The majority of America is shocked at what it has become,” Bale, who gained weight and dyed his eyebrows to portray Dick Cheney in Adam McKay’s Backseat, explained to reporters. “They’re shocked to see the hatred and division that has occurred within America — that attitudes towards people of different opinions, attitudes towards refugees. … It’s a genuine tragedy. But we have been here before; we can learn from that.”

Echoed Wes Studi, who also stars as the escorted Chief Yellow Hawk, “We must admit that we are in such dire straits here that we have to forget about our adversarial roles against one another, come together and defeat whatever it is that’s our problem.” 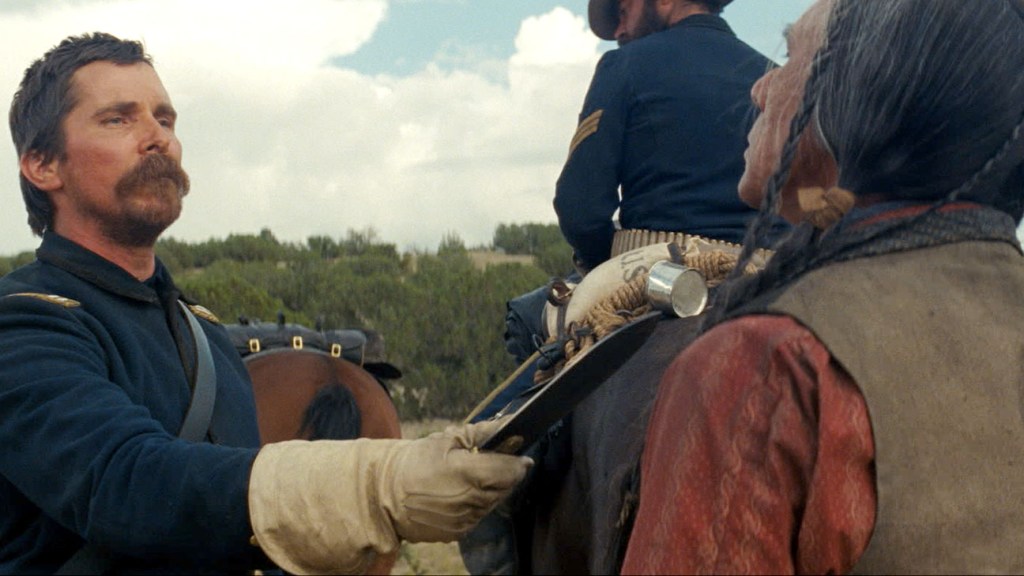 Cooper, who also directed Bale in the 2013 movie Out of the Furnace, shot Hostiles in summer 2016 and was editing the film when Trump was elected. He’s currently writing the script for Hellhound on His Trail, the drama recounting the FBI’s manhunt to capture Martin Luther King Jr.’s killer. “It deals with the rise of George Wallace, a demagogue who is running for president and gives permission for people to enact their bigotry and hate,” he told THR, shrugging, “1968 and 2018 are quite similar.”

The screening of Hostiles — which also includes Rosamund Pike, Jesse Plemons, Ben Foster and Timothee Chalamet in the cast — was prefaced with a Native American blessing at the Samuel Goldwyn Theater, as well as remarks from Entertainment Studios’ Byron Allen and Cooper. “This is a tough movie — it isn’t like the superhero movies that people always go out to see every weekend,” Cooper told the audience, which included Jerry Bruckheimer, Robert Pattinson, John Savage and Toby Kebbell. “Although, we do have Batman!”