“It’s not all runways, lipstick and fishtail gowns,” designer Zac Posen muses in the new documentary House of Z, which launches for rent Sept. 6 exclusively at Vogue.com. Much more than a look at the quintessential glamour of fashion, the debut film from Canadian journalist and producer Sandy Chronopoulos is also the story of a fractured family.

The doc traces Posen’s growing up in an creative-leaning household in the original New York artist enclave of downtown Soho. There’s adorable footage of the toddler Zac using scraps of fabric to clothe his handmade figures, and of his precocious teenage years when he started dressing classmates who would become notable figures in their own right, like Lola Schnabel and Paz de la Huerta.

Posen’s meteoric rise in the fashion world seems like a fairy tale: At 18, he was accepted to the prestigious Central St Martin’s School of Art and Design in London, after three years of apprenticing at the Metropolitan Museum of Art’s Costume Institute. As soon as he showed his first runway collection in New York in 2001, he was championed by influential store buyers and courted by industry titans from LVMH.

But from the beginning, the house of Zac Posen was also a family affair, with his mother Susan and older sister Alexandra helping run the company and his original atelier set up in the family’s apartment. Fast-forward more than a decade, to 2013, when Chronopoulos first crossed paths with Posen. His business was teetering, his sister had left the company in frustration and his mother had been replaced as CEO with new management. 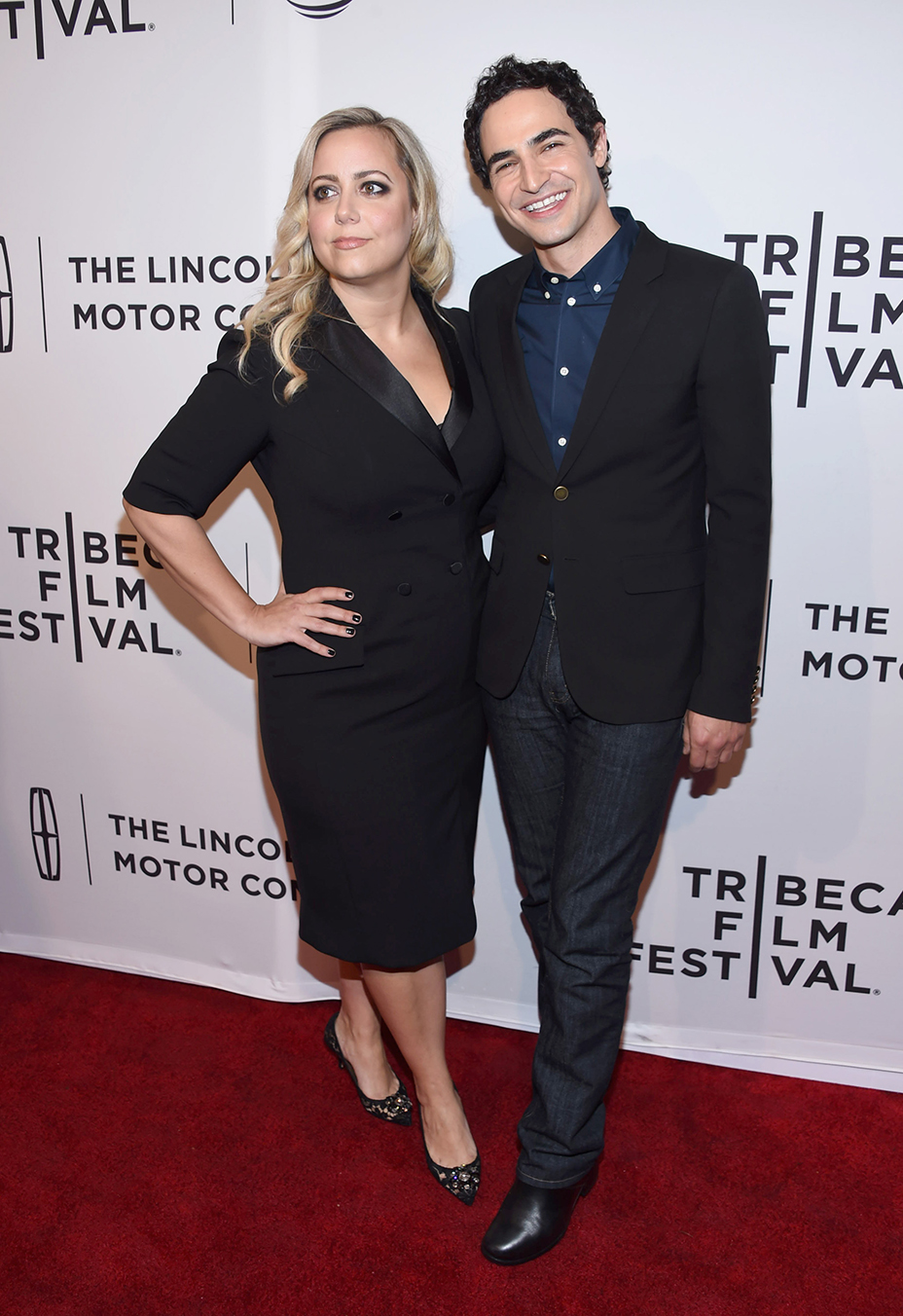 “It started as a television special, just following the making of a collection,” Chronopoulos said at a panel discussion following a Tribeca Film Festival screening, moderated by irrepressible fashion editor Andre Leon Talley in front of an overflow audience that included Posen’s celebrity friends Uma Thurman and legendary model Iman. “I started to get to know him,” she added. “I always thought of him before as the guy from Project Runway, very charismatic but guarded.”

Chronopoulos probed further. Zac’s sister, Alexandra, “said something to me that hit me in the gut. It wasn’t the words, it was how she said it and it was off-camera. I went back to him and asked what she meant and he kind of brushed it off very quickly. But it was the look in his eyes…” Clearly, feelings were hurt.

Zac’s sister had told the filmmaker not to forget that “our family is part of Zac’s journey.” Here his mother and sister — who had nurtured his entire career from the startup days, managed the business and even helped to negotiate an investment from Sean “Puffy” Combs and his business partner Ron Burkle — had been cast aside. The drama highlights how difficult the fashion industry can be, especially when family is involved.

For Posen, the dilemma was whether to hand over his life story, and that of his family, to a journalist when he wasn’t sure what story she wanted to tell. But with a little prodding from Talley, it all worked out for the best.

“They’re very happy with it,” he said of his family’s reaction, with his mother and sister along with artist father Stephen in the audience at the panel discussion. “I think if you’re going to make a movie today, especially about the creative process, then you‘ve got to tell an honest story. I wouldn’t have been interested in putting myself into a puff piece.”

It went deeper than that, Posen said during a recent interview. The making of the film was a healing process for a wounded family relationship that definitely needed acknowledgement and repair. “That’s something that I value, and thank Sandy for the rest of my life beyond my career in fashion, beyond the documentary,” he said.

The centerpiece of the film is Posen’s fall 2014 runway show, when he pulled back from the fantastical New York and Paris shows of seasons past to a tightly edited 25 looks, unveiled before a select audience in his own atelier. Along with the will-it-or-won’t-it-make-it to-the-runway suspense of crafting one particularly intricately constructed gown with an enormous paneled skirt, it highlights Posen’s craftsmanship and devotion to his atelier. 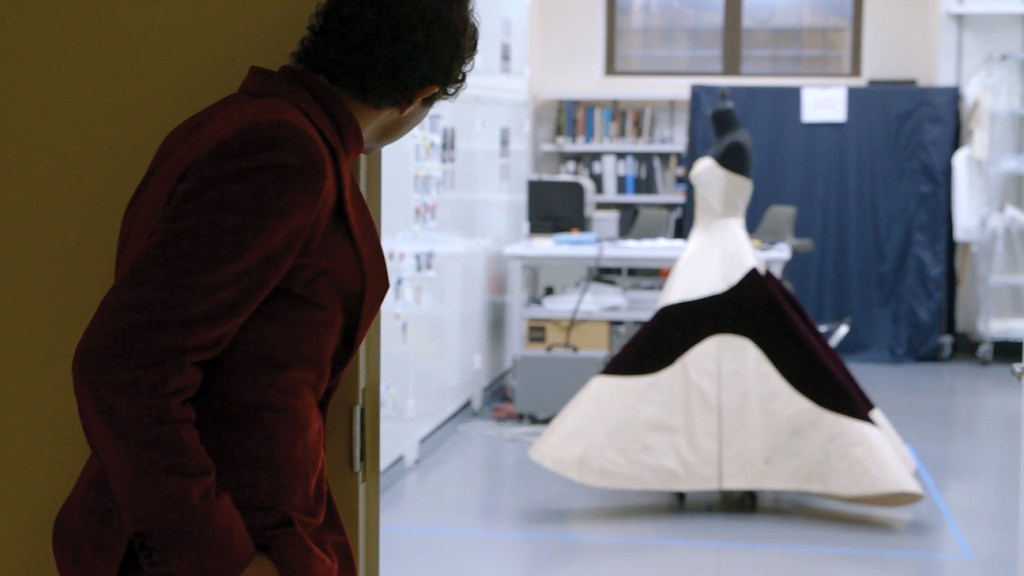 “You’re like the Charles James of today,” Talley exclaimed, referencing the mid-century American couturier famed for dramatic styles such as the “cloverleaf” gown. “You’re very much like Charles James in the way you touch the fabric, in finding the seams on the body, and really cutting the fabric and the craft and construction.”

Yet, Talley hilariously wondered, where can a client wear a “frigate” of a ball gown like that today? Posen replied that today his clients are looking to him for the special piece, not the ordinary number they can buy at any price. As an example, he pointed to the Claire Danes’ glow-in-the-dark gown created last year in fiber-optic faille for the Met Gala, which has drawn orders “from around the world.”

Posen obviously is enjoying his current secure footing in the industry, what with both a namesake and secondary collection and commensurate accessories, as well as heading up design for women’s at Brooks Brothers, six seasons on Project Runway under his belt and assorted side ventures like a cookbook due out in October and airline uniforms designed for Delta Airlines (“That’s not the one that’s in trouble,” Talley jibed, to uproarious laughter).

House of Z is available on Vogue.com.