Named for the spaceship adopted by the story’s protagonist, Tee — a teenage bounty hunter accompanied by a support team that includes her grandmother and a pet cat that may or may not have unusual abilities — Full Tilt Boogie is the creation of Alex De Campi (Image Comics’ No Mercy and the upcoming Madi with Duncan Jones) and artist Eduardo Ocaña.

The debut of the serial in 2000 AD Prog 2184 is actually the second appearance of the property in 2000 AD; Full Tilt Boogie first appeared as a one-off strip in last year’s 2000 AD Regened special issue, with reader reaction leading to this new extension, building out the galaxy the space opera exists in, and the many wonders (and threats) to be found inside.

THR talked to De Campi about the origins and influences behind the series, as well as the benefits of writing for the long-running British comic book title.

Even in just its first two outings, Full Tilt Boogie feels very expansive — like Saga meets Avatar the Last Airbender, to give it the immediate high concept pitch. I hate to be so cliched, but where did the series come from — both in terms of the narrative, but also, how did you end up writing an all-ages series for 2000 AD?

Full Tilt Boogie is a love letter to the space operas I grew up watching: Gatchaman and Space Battle Cruiser Yamato, in their bad US dubs / recuts as Battle of the Planets and Star Blazers. I was never a Star Trek or Star Wars kid; these were what I loved best.

I’d been playing with the idea of Full Tilt Boogie for a long time, and it existed as a pile of notes and part-completed scripts across notebooks and Word files for years. Tee, the Black Dog, everyone already existed.  Then, Tharg [2000 AD’s resident fictional editor] called, and asked if I had anything that would work for an all-ages issue of 2000 AD.

I’d previously done a bunch of stuff for 2000 AD, including several Dredd stories — a couple with Arthur Wyatt, a couple more on my own; even got to have ol’ Joe sticking up Santa Claus for the Dredd Christmas Specal story — and a Rogue Trooper story, so Tharg and I were in regular contact. I’m doing a Vietnam war story in the upcoming Battle special with Glenn Fabry, too.

2000 AD have always been wonderful. Whereas in the U.S. mainstream comics, you’d have to prove yourself as a woman writer toiling away for ages on C-list female character miniseries to maybe have the chance to do, like, a 10-page Iron Man one-shot in a special issue, 2000 AD just looked at what I’d done in comics and said, “yeah, you can write Dredd.” It’s the equivalent of an experienced woman writer walking into DC Comics for their debut gig and just being given an arc of Batman or, I dunno, Captain America straight off, which… I can’t even imagine a situation at DC or Marvel where that could happen.

Anyhow, 2000 AD are wonderful, and really forwards-looking, and so when Tharg called asking about an all-ages one-shot I said sure, and pitched him Full Tilt Boogie, with Ed as the artist. He said sure, it came out, and then — honestly, to my complete surprise — folks wrote into 2000 AD and asked for more of it. We have more Full Tilt Boogie because readers asked for it, and I’m still stunned and very thankful to the readership of 2000 AD for supporting our story.

Did the positive response to last year’s 2000 AD Regened pilot affect how you approached the series as a whole? Were there things that you felt you needed to lean into more, as a result of the feedback?

The difficulty with FTB was never expanding it; it was containing a 10-page chunk of it into a good standalone for the first Regened issue. While the reader response was incredibly flattering and wondrous, it didn’t really influence how Ed and I rolled the story out. I sent draft breakdowns to Tharg, they were approved, I wrote all 10 episodes in one go — which was good, as invariably I finish Episode 10 and then go change a bunch of stuff in Episodes 2 and 5, and you can’t do that if Ed’s already drawing them. Well, you can, but it’s a shitty thing to do to the artist. It was always a series with a huge concept and complex, already-thought-through world. We had the map for where we wanted to go with this from the jump.

The new episode, the start of the series proper acts as an introduction for the Black Dog, who cameoed at the end of the Regened episode, but also feels as if it provides a greater context for the series as a whole, and hints at the scope of the wider narrative — but the focus of the strip remains Tee and her team. It’s a set-up that feels unusual for 2000 AD, in the best way. I’m wondering if you’re intentionally starting with a space opera that might be more familiar to regular readers before transitioning into the main story…?

You’re absolutely right about us going back to provide some context to the universe and series as a whole in that episode, context which becomes very important later in the arc. Tee and her ship is the consistent focus of the arc — a Black teen with her own spaceship who travels the galaxy collecting bounties with her Grandma and her possibly inter-dimensional cat, and who just wants to get paid and go to the beach — but it is an ensemble story. There is a mystery about the Black Dog that we’re parcelling out very, very slowly, and we also meet the teen super-sentai team who are tasked with hunting down and getting rid of the Black Dog and Horus and all who ally themselves with those two “ancient evils.”

Please know, from the bottom of my heart, I never think about making things easier for the reader. They keep up or they don’t; they like it or they don’t. I just try to write the story that most surprises and delights me.

You’ve mentioned him a few times already, but Eduardo Ocaña’s art really helps build the impression that FTB is a fully-complete universe in and of itself immediately; what kind of direction did you give him when you both started work on the strip?

Very little! I’ve known Ed for ages — he drew a Humanoids series for me called Messiah Complex way, way back in the day, our then-editor matched us up and we’ve stayed in touch [and] been friends ever since. I was delighted that Tharg was willing to bring him on too to do his first 2000 AD work, especially as he’d done a lot of concept work for FTB already.

Ed doesn’t need direction. He’s very experienced and has an amazing imagination, and it helped that we share a lot of the same influences — Urasawa, Bilal, Moebius. My collab with Ed is the same on most of my creator-owned work, it’s very calm and friendly and we have a lot of fun.

You already touched on this, but I’m wondering what the 2000 AD experience has been like for you, especially because you’re known for work for U.S. publishers from Archie to Z2 Comics.

I said a lot of it before. They’re good, they’re very supportive, and they give me the exact same choices as they do their male creators and that is actually very fucking rare. I love Archie, and I get a ton of creative control there, but would they offer a woman an arc of the main Archie title? Doubtful. Editors tend to hire people who look like them to write stories about characters that look like them, and throughout monthly comics, most senior editors / department heads are straight white males.

Everywhere else I’ve worked, I’ve been doing creator-owned comics, and I generally choose who I work for based on whether the editor is someone I know and who is good at their job, and can I / the creative team retain all secondary rights to our work, as I can at Z2, Image, and Dark Horse, plus all the bookstore publishers.

This automatically rules out a whole bunch of American comic companies, and that’s fine. Strangely, the folks who let you keep secondaries tend to be significantly better at actually marketing the book than the folks who are just doing this as a way of farming IP. For work-for-hire [or] licensed property stuff, I’m always open to approaches but again, it’s got to be an editor who has a strong reputation for being good at their job — and I will ask behind the scenes with friends who have worked for them — and they need to afford my page rate, which is not a beginner rate. I don’t actively look for work for hire because honestly, I’m booked solid for like the next two years, but I’m on the speed-dial of a few good editors.

I’m also old enough and tired enough that I don’t have the bit in my teeth any more to be The First Woman To Write _____. Someone else can do that. 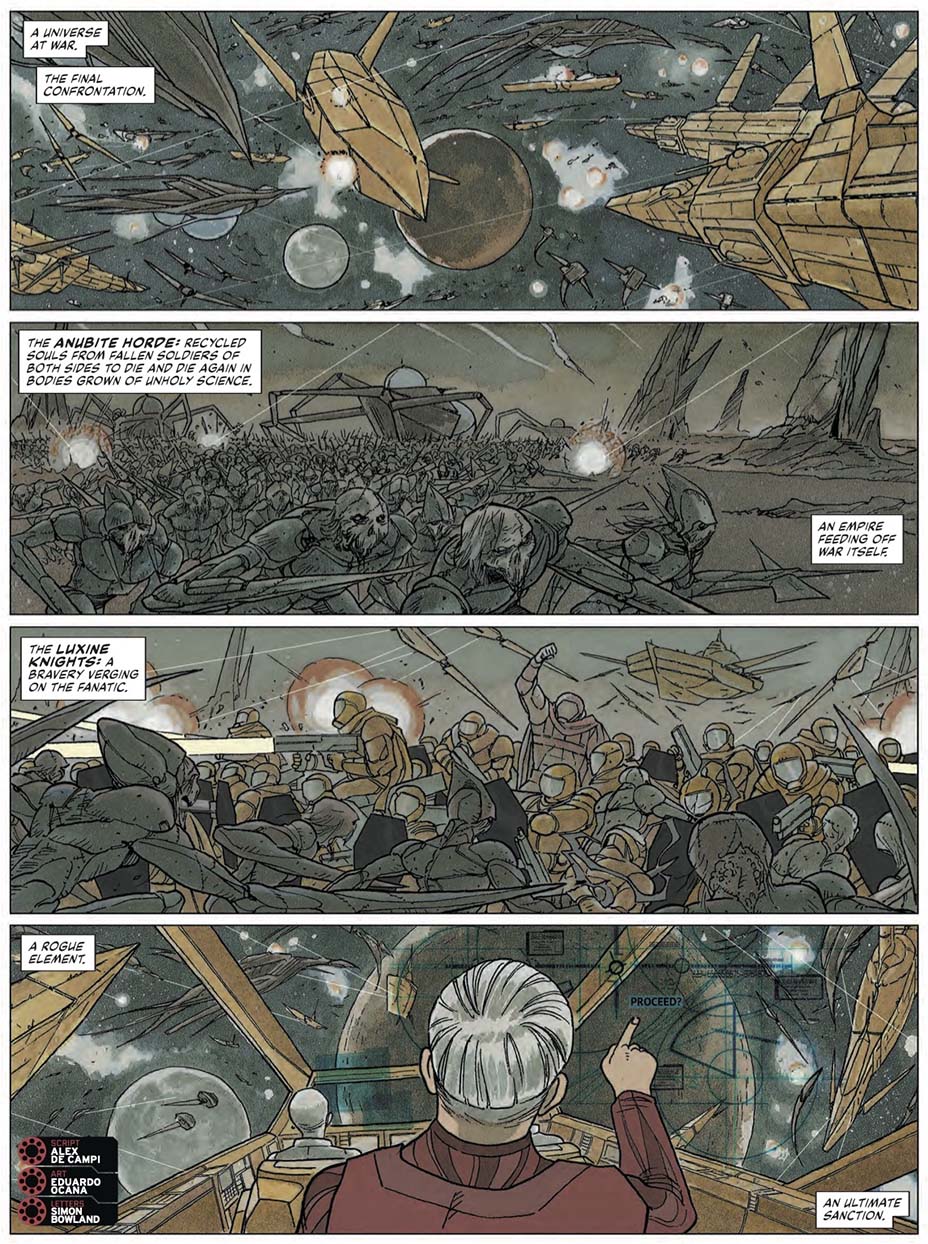