Launching online next month, She Kills is a historical comic book series that almost defies description, and certainly defies expectation. For one thing, She Kills isn’t just the title of the series, or even a descriptor of the activities of its main character, a Tongva Native American woman in the Wild West of the early part of the 19th century — it’s also the name of that character, who’s a mother trying to keep herself and her soon-to-be teenage daughter safe in a world that’s anything but kind.

As the story unfolds, the relationship between She Kills and her daughter — and both women with the city around them, which will one day become Los Angeles — becomes more complicated, and more essential to who and what each is. In case that isn’t enticing enough to convince the curious into checking it out, there’s also the fact that each issue of the digital series by Patrick Meighan and Gabo will be released for free on a monthly basis, starting April 8.

The Hollywood Reporter talked to Meighan, better known as a writer and executive producer on Fox’s Family Guy, about the series, and the women at the center of it all.

I have to be honest, She Kills is unlike anything I’ve read before, both in terms of tone, character and then that great last page reveal. The obvious first question is, where did this come from? What made you think, “Oh, this is the story I need to tell next?”

She Kills started out as a love letter to my town, and an acknowledgement of the insane amount of blood upon which it was constructed. But as I started to piece the project together, my daughter hit her teens, and that kind of changed everything. She became so fierce and strong and complicated, and so did our relationship, to match. I knew I had to write about it, and so that initial love letter ended up expanding — or contracting, I guess, depending on your perspective.

She Kills, the character, is wonderfully hard to read; at times, the reader can cheer for her or at least understand her anger at a world that really does seem just as bad as she says it is, but at others, she seems almost too surly and aggressive in her attempts to keep everyone from getting close. It makes her a great protagonist — that she’s funny, too, helps — but … she’s not the only protagonist. Her daughter is her opposite: Quiet versus her mother’s volume, kind when compared with the hard-heartedness of her mother, and so on. The tension between the two feels like it’s going to be the driving force of the series as it goes forward.

Without the dynamic between She Kills and her daughter, the series would be a joyless cavalcade of historical stabbings and lynchings, and that’d get old pretty fast. The mother-daughter conflict is absolutely what drives She Kills.

This woman has a lot of reasons to keep the world far from herself and from her daughter. She has a lot of reasons not to relinquish control … some of ‘em are good, and some not-so-good. But now Joaquin Dos is hitting that age where parental control is what you rebel against. Unfortunately, it’s just a very dangerous place and time for her to rebel. And She Kills is a very dangerous mom to rebel against. Everything that follows — all the blood that’s shed over the 14 parts of the series — is a direct consequence of this problem.

Gabo’s artwork really brings a lot to the story, it feels evocative of She Kills’ experience and worldview in a way that’s hard to fully explain. What was the collaborative process like? What has it been like, seeing these pages come in?

Thank God for Gabo, who’s brought so much more to She Kills than I could possibly have thought to ask for. He’s of course very talented at line art, and his work has this grittiness to it that’s so perfect for this story, but he also lays a lot of warmth in there. He really wants to do right by these characters! The few times I’ve ever had to go back to Gabo and ask for more from him, it’s usually been when I’ve wanted him to up the violence. Like, “can we please make this grislier? Can we really lay some punishment on these characters?” And he does, but it’s rarely Gabo’s first impulse. He’s so big-hearted — he wants to protect these characters!

So if — as the series plays out — anything ends up striking you as excessively cold or gratuitous, that’s 100 percent my fault. I think I’m just more sadistic than Gabo.

What’s the thinking behind the release of the series: Why self-publish digitally, and why for free?

Honestly, I just want it to be accessible to as many people as possible. I’ve invested so much of myself into this: about a decade’s worth of historical research, not to mention the learning curve involved in navigating what for me is a whole new medium. After all of that, the only thing I really care about now is finally sharing the story. I want to put it in front of every single reader that I can find.

Finally, and I’m sure you’ve been asked this a lot of times already, but … how do you pitch this story? What’s the elevator pitch for She Kills that fully explains everything that it’s about beyond simply plot?

I stink at elevator pitches, and this one is probably harder than most, but here’s the best I’ve come up with so far: it’s basically if Lady Bird were a bonus chapter in The Ballad of Buster Scruggs.

She Kills will debut online at She Kills Comic.com April 8, with subsequent releases timed for May 13 and June 10. Each release will be free. Covers for the three releases, by Adam Gotham, can be seen below. 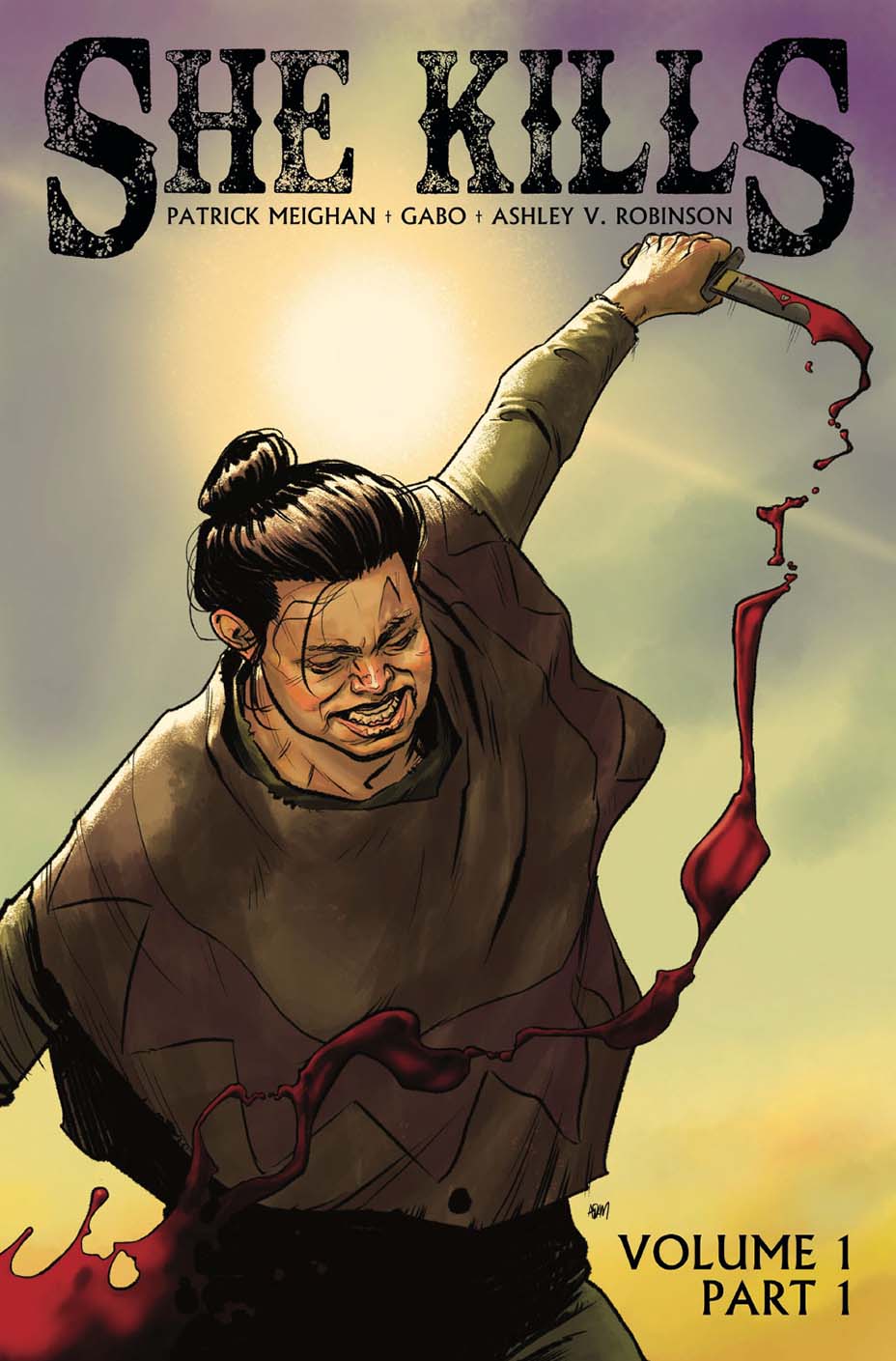 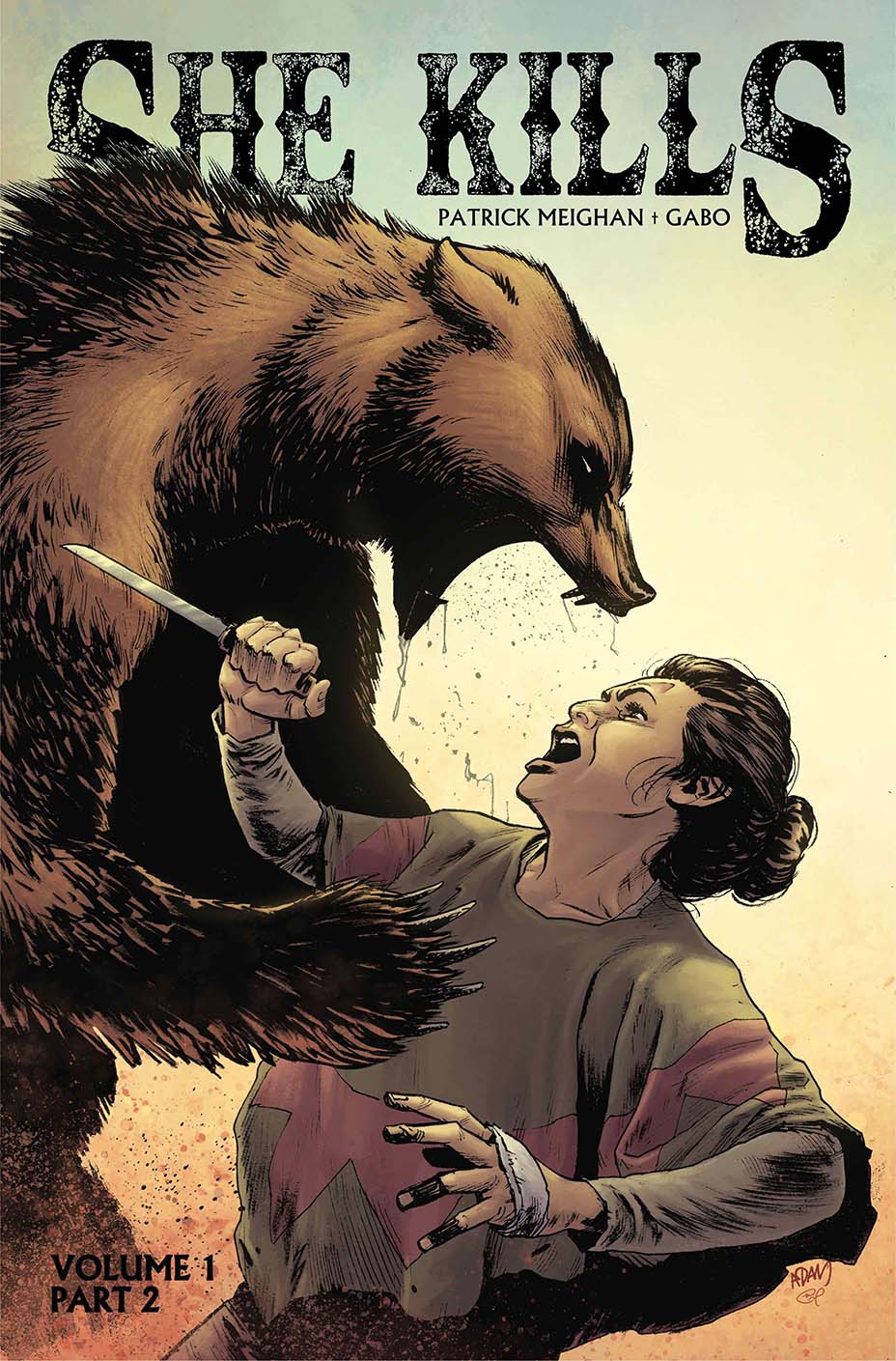 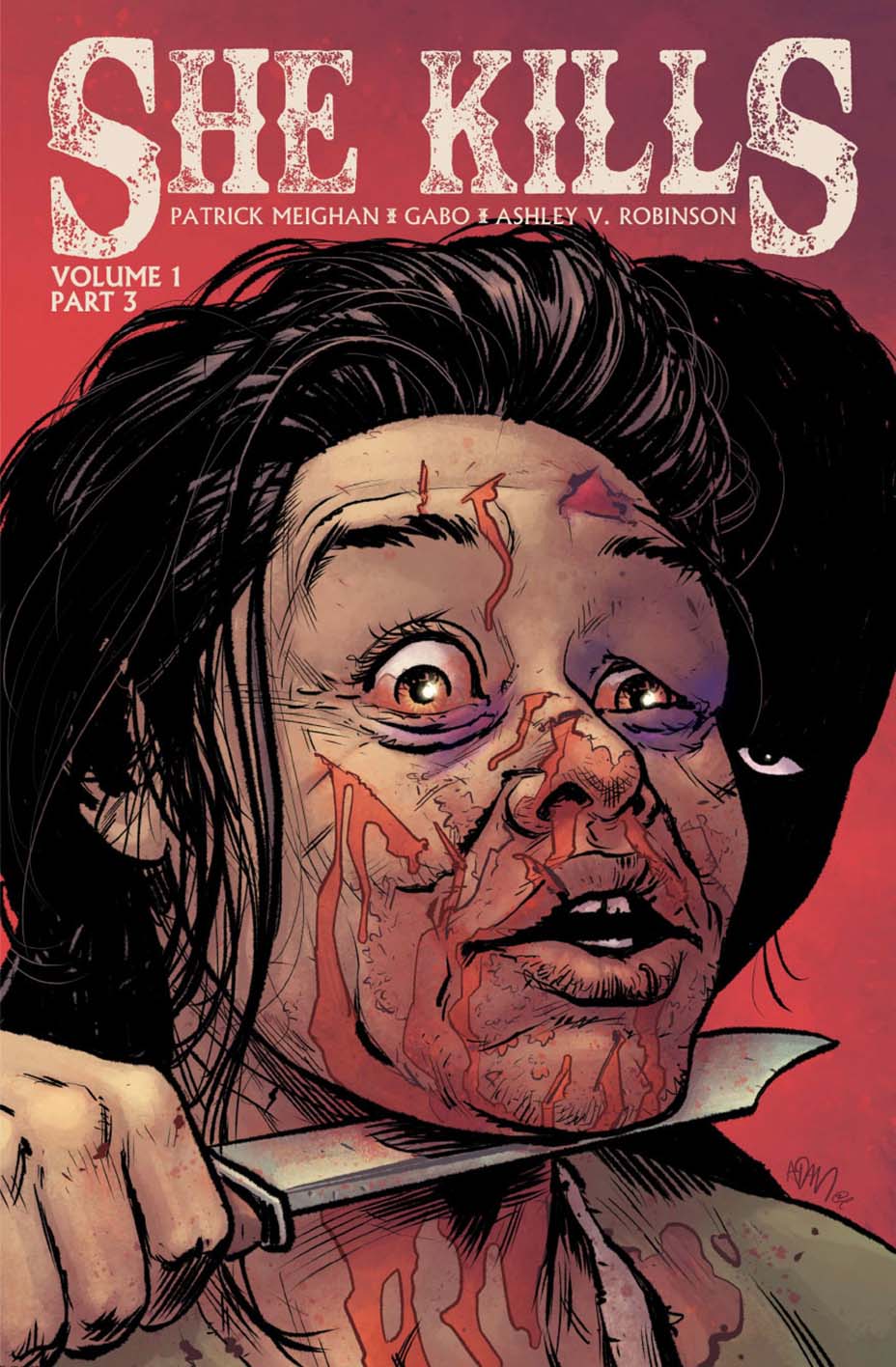