“I was editing pretty much anywhere I could sit down for more than 30 minutes,” Phillip Youmans tells THR of the drama feature that went on to garner two Independent Spirit Awards nominations. Shot over the summer of his junior year in high school in New Orleans, Burning Cane is set in the sugar cane fields of rural Louisiana and follows Helen Wayne (Karen Kaia Livers), who is navigating her religious convictions and the addictions of her son and pastor.

In April, Youmans — by then a student at NYU film school — became the youngest director to screen a film at the Tribeca Film Festival and the first black director to win the festival’s top prize, the Founders Award. The filmmaker, now 19, is nominated for the John Cassavetes Award at Feb. 8’s Indie Spirit Awards, bestowed upon films made for less than $500,000.

Youmans talked to THR about the inspiration behind his film and finding distribution via Ava DuVernay’s Array Releasing.

The root of the inspiration came from my upbringing in the Southern Baptist church. It came from the questions, the hypocrisies, the fallacies that I recognized in the church. Now with that being said, that was the seed of the concept, and then from that point on the story of the actual film then started to pour out. I started to look at other people in my life, like my grandmother, my mother, the pastors I have known, the people who have worked in the church around me — all those kinds of people who were important in my life, and a lot of them who actually lived in Lowcountry South Carolina.

How long did it take you to write the script?

The writing process started in December of my junior year. I wrote this short script called The Glory, which at the time was about the same Helen that we see in Burning Cane. It was something that I just did on my own. … I really went to two high schools. I started in the morning at Ben Franklin High School until 11:30 a.m. and then I went to the New Orleans Center for Creative Arts. The truth: The bulk of my actual writing came when I was at Ben Franklin because I was, for some reason, far more productive in classes, when I wasn’t supposed to be working on it. I started turning out drafts of the script literally during class, whether it was English class or social studies. 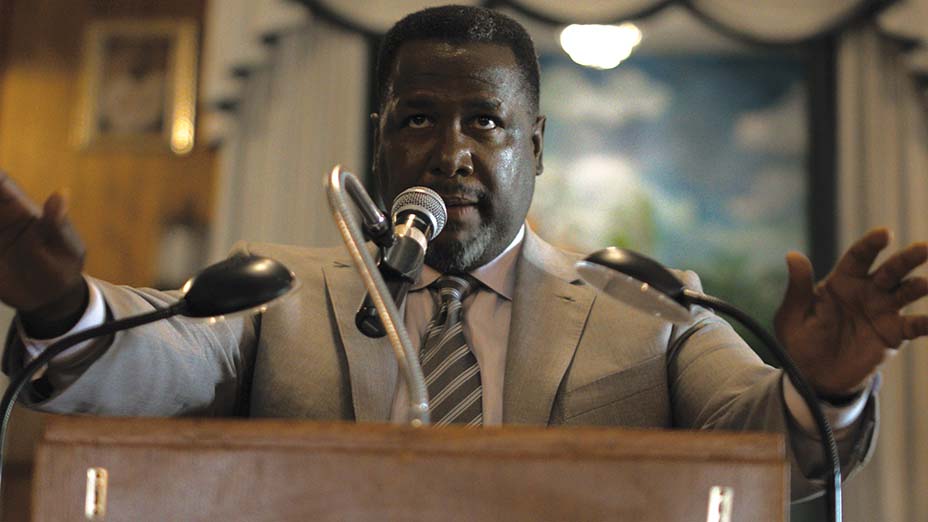 At what point did you and your producers, who were your classmates, decide that Burning Cane was something that could be made?

The first moment that we said we were doing it honestly came earlier on than we really had the on-paper ability to say that we were going to do it. We started shooting in July 2017. It was just the summer was really the only full block of time that we could do it without all of us having to go to class. I started getting people to put money into our Indiegogo, raising more and more money through my job, through whatever money I had, and put some of that aside for the production. In terms of what you would think it would take to actually make a feature, it was nothing that seemed like it would be enough, from a lot of people’s standards. We were relying so much on the community to pull off shooting locations for free and using gear that none of us was able to afford. I got a grant from Louisiana through the help of my executive producer, Benh Zeitlin [director of Beasts of the Southern Wild]. So I got an editing suite.

Was there an obstacle that came up during filming that sticks out to you?

I think the biggest obstacle — or at least the scariest one — probably was just shooting on the Laurel Valley Sugar Plantation. There is an overseer at the Laurel Valley Planation that called the cops on us twice. It was when we were shooting that sequence of Wendell [Pierce] driving in the cane fields, and he turns into a driveway that was adjacent to the slave quarters.

But when Wendell pulling in and pulling out, that guy called the cops and said that Wendell was trespassing. So literally 30 minutes later, a platoon of Lafourche Parish sheriff’s officers were swarming us. It was horrifying. It was OK because I had applied for a permit and we weren’t trespassing, but they only really wanted to listen to [producer] Mose [Mayer]’s father. He came to set and spoke to them. He had to come to set. I’m gonna be real: Mose and his father were the only white people there — the rest of us were all black. It was rural Louisiana, Laurel Valley, and it was very, very clear that there was a reason why that overseer felt so — it wasn’t in any way a welcoming environment.

How did Array come to distribute?

After the festival, Array seemed to be the most interested. Array works within the spaces of filmmakers of color and women filmmakers. It is just a grassroots distributor, and Burning Cane, in a way, was made through a very, very, very grassroots level of filmmaking, so there are tons of ways, tons of parallels where I felt it was going to be the perfect film. I wrote an email to Ava and Tilane Jones, the president of Array, and then a week or so later I was in the [NYU] library just studying, and I got a call from Ava and I freaked out. That’s when she told me they were going to make an offer on the film.

This film has been out for several months now. What has been your favorite screening experience?

My favorite ones were at [historically black] Spelman [College] and at the National African American History Museum in Washington, D.C. I mean the was the first time I had ever really shown the film to a predominantly black audience through and through. And the questions that came from those screenings were unlike any others in terms of honestly being able to have both the conversations about cultural consequences of stories like this.