In the age of Black Lives Matter and the Me Too movement, with the Charlottesville trial making headlines, the themes of Harper Lee’s seminal novel To Kill a Mockingbird ring eerily as true as they did back in the 1950s, when she penned the story about a 1930s lawyer in the Deep South defending a black man against a white woman’s rape allegation.

So when Aaron Sorkin started adapting the book for the stage, he knew he needed to develop a fresh take for 2018 and tackle some of the story’s topics in a contemporary light.

“I can find those relevancies, so that now when I read the book and I hear Atticus talking about how there’s goodness in everyone it starts to sound troubling to me, like ‘there were fine people on both sides,'” Sorkin tells The Hollywood Reporter. “That’s why I want to ask these questions.”

The play is now doing sellout business in previews in a Scott Rudin production officially opening Dec. 13 at the Shubert Theatre. When Lee approved Sorkin to adapt the novel before she died in 2016, he was excited and daunted by the task. Many of the cast and director Bartlett Sher have been involved with all three workshops of the play, which began in October 2017, and the script has changed significantly in that time.

“I made the mistake of going into it with timidity with the first draft,” Sorkin admits. “The first draft I did took all our favorite scenes, all the scenes that you need to do to tell the story, and stood them up and dramatized them. And the best you can say about it is that it was harmless. With the second draft, I just pushed all that aside — the book, the movie, everything — and I started over again and I wrote a play.”

While a lawsuit with Lee’s estate over whether the stage treatment remains true to the novel was settled out of court, Sorkin insists, “There isn’t an event that occurs in the play that doesn’t occur in the book.”

“Here’s the biggest difference,” Sorkin explains. “In the book and in the movie too, Atticus believes that there’s fundamental goodness in everyone, that you’ve got to crawl around in someone else’s skin to really get to know them. And he insists his kids, Scout and Jem, understand terrible people like Bob Ewell and Mrs. Dubose and the 12 jurors who found Tom Robinson guilty. And we were taught, when we learned the book in school, that those were virtues, and they’re presented as virtues in the book, they’re presented as virtues in the movie. In the play, that belief system is questioned.” 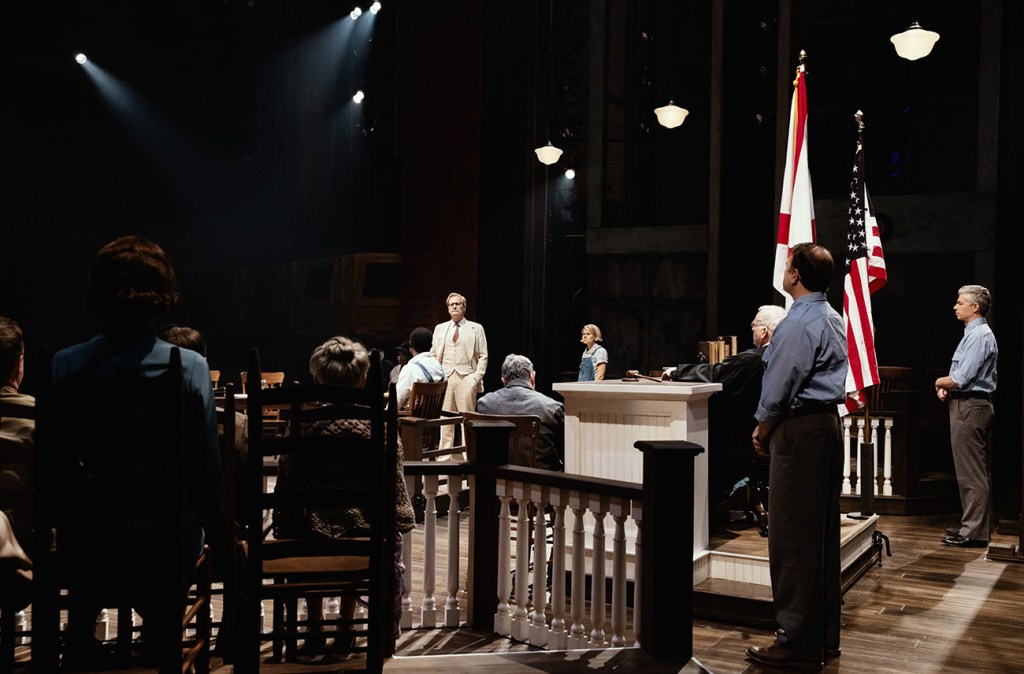 To ask those questions, Sorkin built a nonlinear timeline for the play, weaving Tom Robinson’s trial throughout the narrative so the events around it carry a weightier significance. He also has adult actors playing the child roles — Scout (Celia Keenan-Bolger), Jem (Will Pullen) and Dill (Gideon Glick). In the play, the children look back at the time as grownups, whereas in the book, Scout is recounting the events of her childhood from a more innocent perspective.

“When I did the very first reading, if you told me that they were doing To Kill a Mockingbird with adults, I would tell you, ‘I don’t want to see that’,” says Keenan-Bolger. “And now as I’ve worked at it, trying to navigate Aaron Sorkin’s writing, there’s no way a kid could do this, because this 40-year-old is struggling with the density and the complexity of his ideas.”

Keenan-Bolger feels the pressure of expectation, calling Scout “the greatest American literary heroine of our time.” But on stage, Sorkin has shifted the focus to Atticus as the protagonist. Scout is the narrator in the book and the movie, and Keenan-Bolger relishes the device in theater where she’s able to play both parts of the character’s perspective.

“Scout is the one who is really trying to parse through this little town — what is happening, what it means for a town to serve justice and what is right and what is wrong,” Keenan-Bolger says. “And that’s a really nice place to live every night.”

One thing that has remained constant since Sorkin started writing the stage adaptation is that Jeff Daniels would play the iconic role of Southern lawyer Atticus Finch, immortalized by Gregory Peck in the 1962 film.

“There was never any discussion of anyone else,” says Sorkin. “It’s not quite like tailoring a suit for someone. The first job was to write the play and to write this character, but it’s a great relief knowing that you know who’s going to play the part and you know that they can.”

Daniels and Sorkin had worked together previously on The Newsroom and Steve Jobs, and Daniels is putting aside people’s expectations of who Atticus should be, approaching the character from a fresh place.

“He’ll be untouchable to some. I can’t do anything about that,” Daniels says, noting that he can’t escape the comparisons to Peck. “You don’t go into this thing with any timidity. You have to go into it with guns blazing and take a big swing.”

However, for Daniels, the task was not to bring the story into the present day. “I just can’t go there,” he says. “I’m in 1934 Alabama. I’m trying to convince a white jury of Christian farmers that this African-American guy is 100 percent innocent. That’s all I’m focused on.” 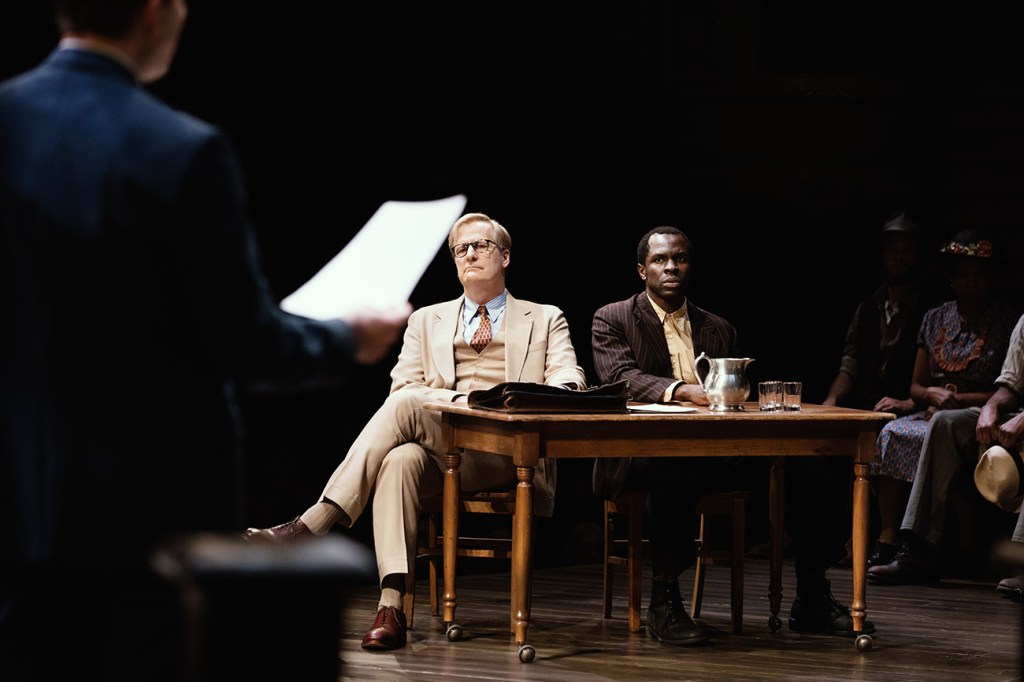 Sorkin has expanded the African-American characters for the stage, which is one of the main reasons LaTanya Richardson Jackson agreed to take on the role of Finch family maid Calpurnia.

“Black women are constantly playing the maid or the cook or whatever,” she says. “I just knew that for me to come do this, it had to be interesting enough for me to feel like I was doing something other than what had been done. And it is.”

Jackson says the book was banned in her school system in Atlanta, and she was only able to read it through a weekend program at Morehouse College. “In our public school system, that book was not in there and it was by design,” she explains. “It was still the South, and I think they took umbrage at how some of the people were portrayed in it.”

She calls the play “manna for us right now,” but adds that she has to be careful not to let her own politics get in the way of creating an authentic portrayal of a black maid in the 1930s.

“Who she was [in the book], I recognized because I know those women, which is why it’s so important to me now to make sure that I am truthfully showing who they really were,” says Jackson. “These people were just like you and me. They were part of the community and were not supposed to talk. They were supposed be in the background, but they were an integral part of the nurturing of how people were evolving, how they were being raised… I’m cognizant of that and I’m trying to focus on that and keep the politics of who I am sort of calm enough so that I can deliver her in an honest manner.”

For Gbenga Akinnagbe, who plays Tom Robinson, portraying the character is political, and he recognizes Robinson’s journey and suffering in himself.

“I live through this every day, being a black man in America,” says Akinnagbe, who is making his Broadway debut in the play. He hopes the lessons of the characters and story are able to plant seeds of change in the country.

“There’s a line in the book and the play that talks about how someone chooses to start something, knowing that they are licked before they even start, knowing that they are not going to win this, and they do the right thing anyway,” Akinnagbe says. “If we aspire to that level of action, we wouldn’t be able to do anything but change our nation.”