With All-America Comix, comic book creator Joe Casey is returning to territory some fans may find familiar. The Image Comics title was announced way back in 2016, and centers on a superhero similar to one of Casey’s best known works: Marvel’s America Chavez.

The new book from Man at Arms’ Casey and artist Dustin Nguyen introduces America Vasquez — a character who for legal reasons definitely isn’t America Chavez, a character Casey co-created for Marvel Entertainment in 2011. America Comix, scheduled for a mid-June release, asks how someone from a different, younger, generation might go about the everyday duties asked of a superhero.

As created by Casey and Nick Dragotta, America Chavez was an updated take on the classic Marvel character “Miss America,” who debuted in 1943’s Marvel Mystery Comics No. 49. She was a headstrong, invulnerable, superfast and superstrong Latinx hero whose brusque demeanor put her at odds with many of the longer-serving superheroes of the Marvel Universe. She was at the center of 2011’s six-part Vengeance series, written by Casey, before becoming a member of the Young Avengers in the 2013 reboot of that team under the creative control of Kieron Gillen and Jamie McKelvie, a series that firmly transformed the character into a fan favorite.

From there, America Chavez appeared in 2015’s The Ultimates and its follow-up series, 2016’s Ultimates 2, but despite repeated requests from fans on social media, the character appeared destined to remain a team player instead of being granted a solo project — which was the state of play when Casey and Image Comics first announced All-America Comix, almost four years ago, with the writer apparently returning to a character he hadn’t been associated with in five years in order to give audiences what they wanted. (Marvel eventually gave Chavez her own series, 2017’s America, which lasted 12 issues with YA novelist Gabby Rivera writing.)

The America Vasquez of All-America Comix is, to all intents and purposes, America Chavez as she appeared in Vengeance — she even wears a T-shirt that’s similar to the costume of the 1940s Miss America costume — without the changes made by the creators who handled the character post-Casey. Oddly enough, this makes the characters different enough, to the point where readers who discovered America Chavez after Casey’s original story might not necessarily see the parallels. Nonetheless, All-America Comix is a bold move, and potentially an argument in favor of writers and artists maintaining control over the characters they create.

THR has the debut of the preview for the title (below), and talked to Casey about the project, its connections to Marvel’s America and more.

Let’s start with the obvious question: This project was announced way back in 2016, and a lot has happened since then. Is the All-America Comix that is going to be in stores this June essentially the same comic that you had in mind back then, or is this something altogether different?

Things tend to work out for a reason. At least, that’s what I like to tell myself when I’m trying to reconcile things that happen, as they say, in their own time. But the basic story is still the one I worked out way back when it was first announced. Having said that, there are certain…I dunno…conceptual nuances that exist now in the book that absolutely came into better focus in the last year or so. Needless to say, the final book is way better now than it would’ve been had it come out three years ago.

America Vasquez isn’t America Chavez, except where she is; did you have plans for the Marvel character that never came to fruition, and is this what you’re delivering in All-America Comix? The opening pages of the issue have a kind of Savage Dragon/Destroyer Duck vibe in terms of reclaiming the character from Marvel…

[An explanation for the uninitiated: 1996’s Savage Dragon/Destroyer Duck is an infamous comic book in which Howard the Duck creator Steve Gerber wrote a story where an unnamed duck — clearly Howard, a character Gerber had fought Marvel for the ownership of — left the Marvel Universe and was placed in witness protection, while being replaced by a soulless clone. To make matters more complicated, the issue was an unofficial crossover with Marvel’s own Spider-Man Team-Up No. 5, meaning that the switch arguably “counted” in Marvel comic canon.]

First of all, I don’t know what you mean.

Second of all, what we’re delivering in our book is a character and a direction that we have complete control over. In other words, there’s a strong creative hand at work here. A definite vision being executed. It would appear to me that certain other characters, ones that you may or may not find at other publishers, have ended up, in one way or another, as “open-source” characters, where subsequent writers and artists seem to take their cues more from fandom’s wants and desires — or, God help us, their Tweets — rather than their own creative instincts. And that generally produces mixed results at best — see Marvel’s Origin miniseries from ’01-’02 for an example from back in the day.

There ends up being a lack of consistency in the depiction of…certain other characters. Things that were incredibly important in the beginning, like cultural identity, can sometimes get lost in the shuffle. But, y’know, that’s the risk you take when you create things that you don’t end up owning or even properly shepherding. Most creators have probably gone through similar experiences. All-America Comix is one way to ensure that kind of thing doesn’t happen.

Along similar lines: What is it about America that brought you back to the character? What makes her the one character you’ve written for Marvel — or DC, for that matter — in particular that you ended up rescuing in this way?

Well, the character that stars in All-America Comix is a new character. In addition to what I said in the previous answer above, I generally have my own point of view on who and what certain characters are and how they should be depicted. Especially the ones that I created.

Having said that, I would never use the word “rescuing,” because I’m grateful when anything I’ve created (or co-created) goes on to have any kind of life of its own. The way that certain characters have connected with certain fans is a really special, beautiful thing. But I’m also grateful that I’m in a position to be able to travel down my own creative avenues when I feel like it…and that’s all we’re doing here. It’s not meant to diminish what anyone else happens to like. This is “comicbooks.” There’s room for all of us.

But, in that spirit, one thing I do know: this new character we’re introducing — who she is, what she represents — needs to exist.

The solicit teases that America discovers the hidden secret of the universe, and a cosmic truth, which makes me think of previous projects of yours, not least of which being Godland, and also Dynamite’s Captain Victory reboot; beyond, simply, that there’s a history of “cosmic comics” that are so compelling and, honestly, so fun, what is it about questioning the nature of comic book reality that keeps bringing you back to pushing at the idea to see what happens next??

I think comicbooks are a medium tailor-made to explore those big ideas, because you can explore them on multiple levels simultaneously. Conceptually, visually, viscerally, subtextually…you can dig in on this stuff and make an impression that can both engage and inspire the reader. That’s what the best ones do for me. It’s pop psychology at its poppiest, and I like that.

Now, as a writer, I obviously don’t profess to have any deeper insights about this stuff than anyone else. I just like asking the questions. Any answers — on my part, on the readers’ part — are completely subjective. For me, it’s comicbooks at their most interactive.

For that matter, America feels perfectly placed to be the character to do this with; she can travel between dimensions, and she’s of a generation that is outside of the traditional audience for such cosmic truths in comics — and her no-bullshit attitude puts her at odds with the somewhat hippie-ish mind-set that has figured into cosmic comics since the heyday of writers like Jim Starlin, Steve Englehart et al. Is there some excitement in the idea of approaching these ideas with this kind of character?

The generational thing is a huge factor in wanting to tell this story. In fact, it might be the angle I was most interested in exploring. And someone of this new, emerging generation — one that has their own, unique take on this thing we call life — confronting some of those tried-and-true “cosmic questions” presented a unique narrative challenge. Not to mention, this cosmic truth is particularly cosmic, if I do say so myself. But I’d like to think it’s also somewhat relevant. I guess we’ll see….

I’m excited to see you team back up with Dustin Nguyen for the first time in, what, 15 years or so? What does he bring to a project like this? The preview pages are a great mix of dynamism and subtly, especially when it comes to the character acting.

As events unfolded with this project over the past few years, it became painfully clear to me that Dustin was the right man for the job. Thank God he said yes when I asked him. Interesting enough, this might be the first full-on superhero comicbook that he’s drawn in quite some time…the kind packed with four-color characters flying around and hitting giant robots and causing big explosions and penetrating the membrane of the known universe. Y’know, all that cool stuff.

He’s one of the most accomplished artists in our industry and, for me, his work on this book alone is worth the price of admission.

Last, purposefully leading, question: What should readers expect from All-America Comix that might take them by surprise? Actually, I’ll throw in another: What won’t they expect and is central to the entire thing…?

I think what any reader takes from All-America Comix depends entirely on where they happen to be coming from, in terms of preexisting knowledge. If they’re at all aware of the meta-levels this book contains, and there are many, they’re definitely going to have a certain type of experience.

However — and this is way more exciting to me — if a reader is coming to this thing completely cold, what we’re hoping for is that they experience a superhero comicbook in a manner that’s become more and more rare. Look at something like Amazing Fantasy No. 15. It’s all there. A perfect superhero story told in only 11 pages. If the 50 years of Spider-Man stories that came after had never happened, that first comicbook would still be a classic.

Or look at Superman Annual No. 11. Or Daredevil No. 191. Or Iron Man No. 128. Or Animal Man No. 5. Not that what we’re doing is anywhere near those seminal issues, but that’s what we’re going for. The point is…the raw power of the single-issue superhero comicbook should never be forgotten. Or ever underestimated, for that matter. 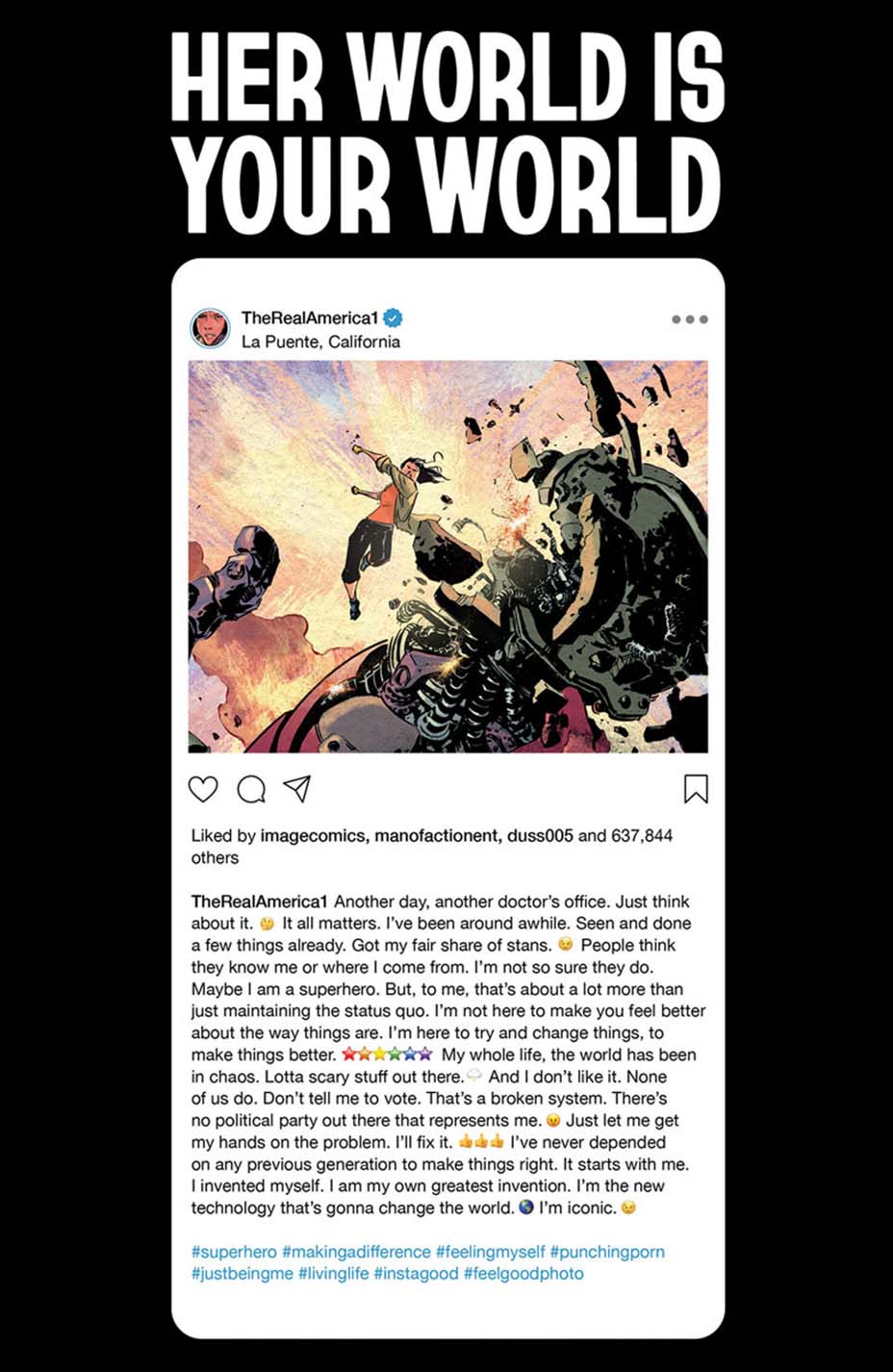 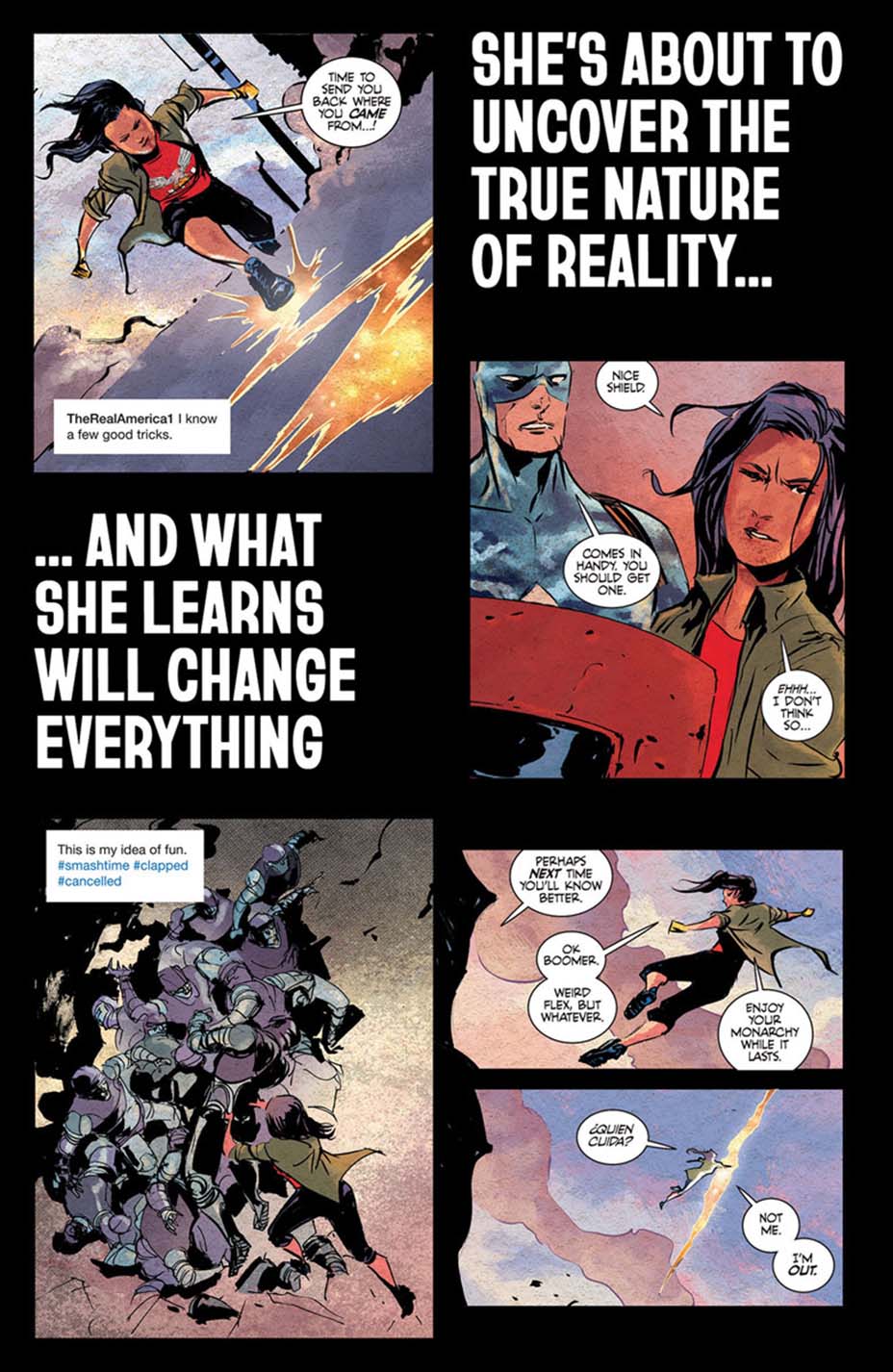 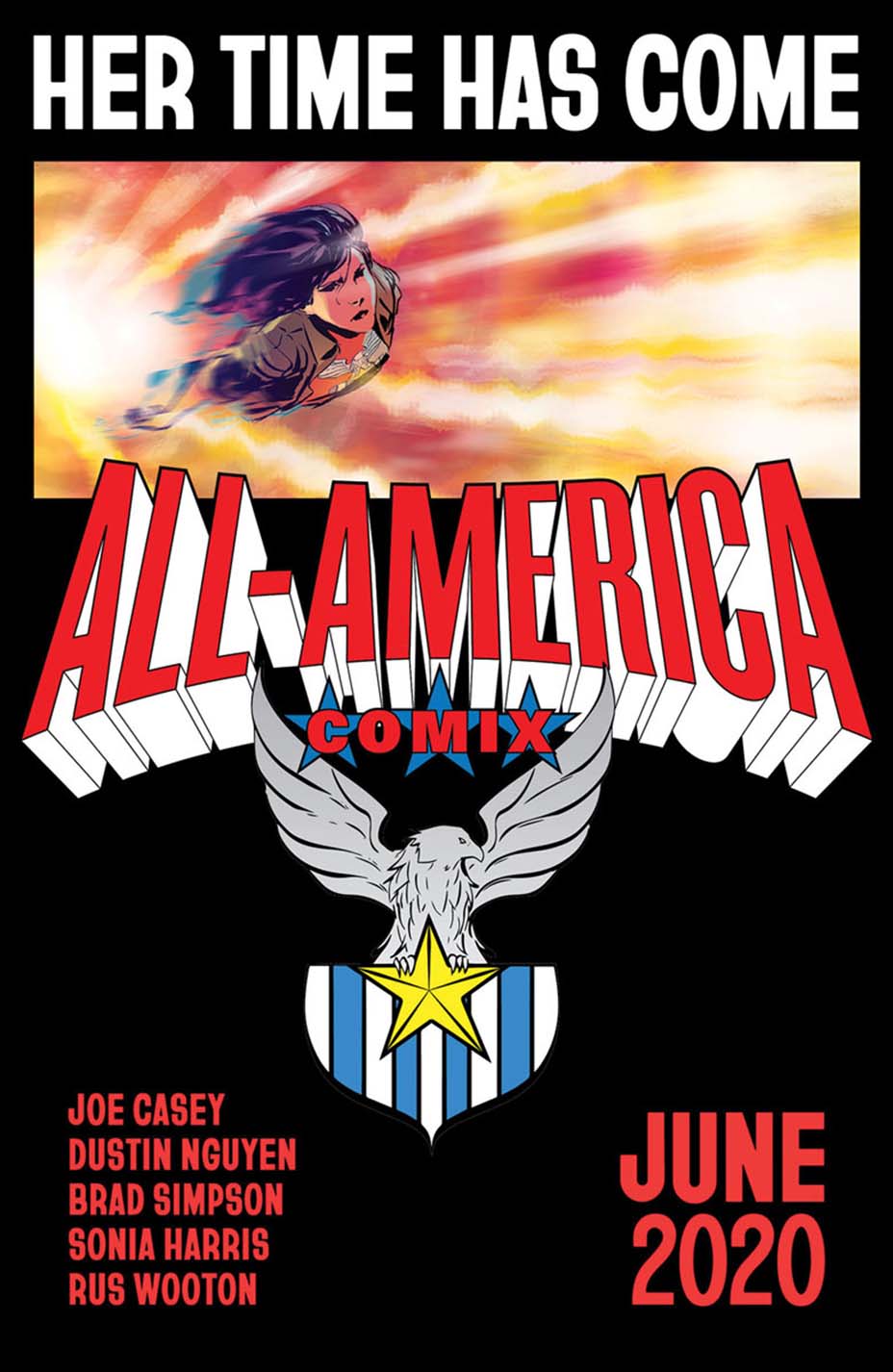 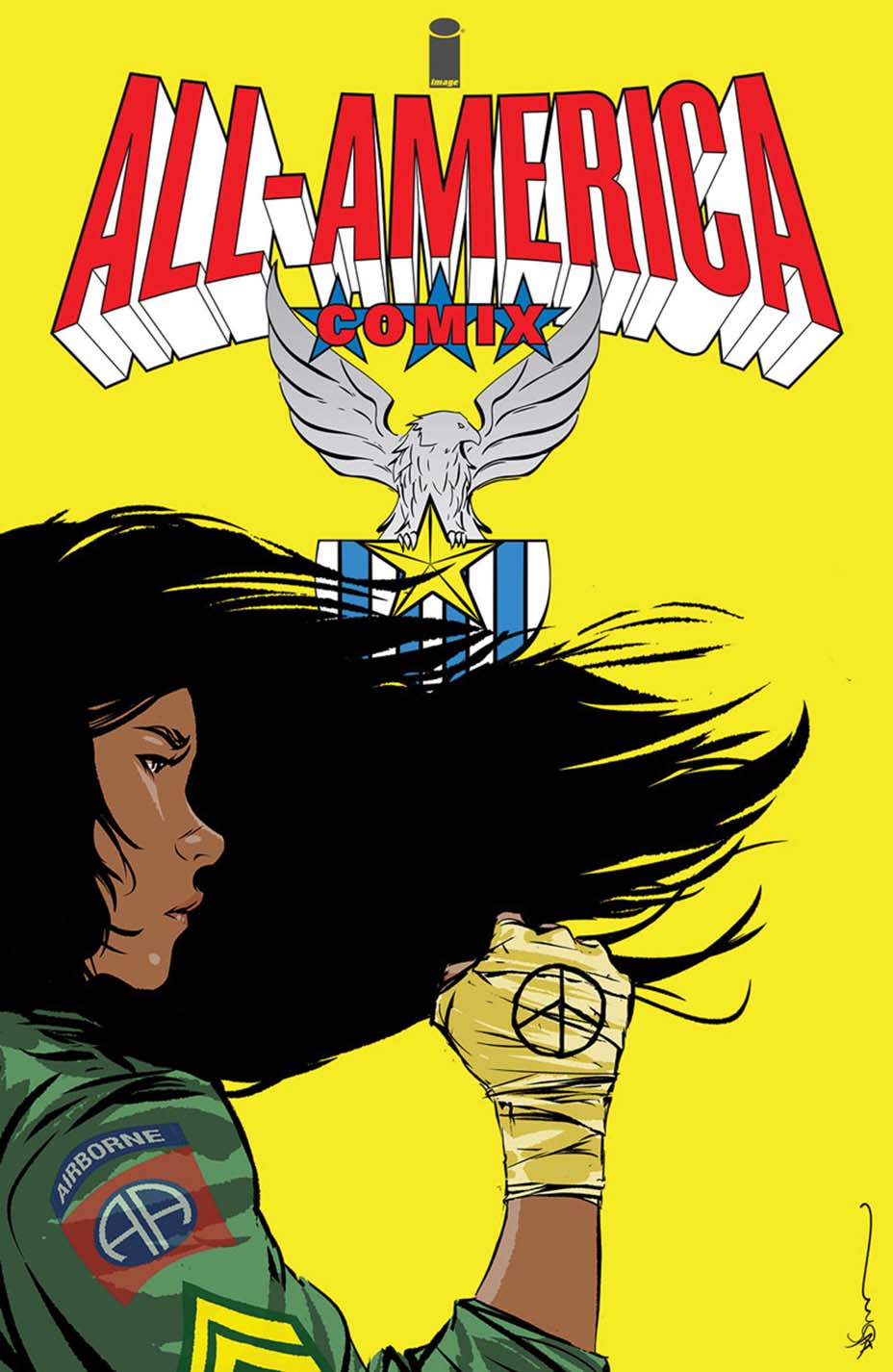 All-America Comix No. 1 will fly into stores June 17.