Satirical versions of Adolf Hitler have been on the big screen since the ’40s, as parodied in Charlie Chaplin’s Great Dictator (1940), Ernst Lubitsch’s To Be or Not to Be and Mel Brooks’ The Producers (1967). In Jojo Rabbit, currently in theaters, Hitler returns to the big screen as a 10-year-old’s imaginary friend in writer-director Taika Waititi’s World War II coming-of-age anti-hate satire Jojo Rabbit. Dressing the characters that populate the film’s Nazi Germany setting was the task of costume designer Mayes C. Rubeo, best known for her fantasy and otherworldly designs for Avatar and Thor: Ragnarok.

“Waititi was the driving force on the costumes. He was very specific in what he wanted the costumes to be, and we had long intensive conversations about the looks,” says the designer. “We wanted it to look like wartime through the eyes of a child and do something unexpected.” Referencing the wartime aesthetics of Italian Neorealist ’40s films, her goal was that “the movie should be World War II in the summertime with a brightness as seen through JoJo’s eyes. We did not want this to be a [black-and-white] documentary, we wanted to do something different in a respectful way.” 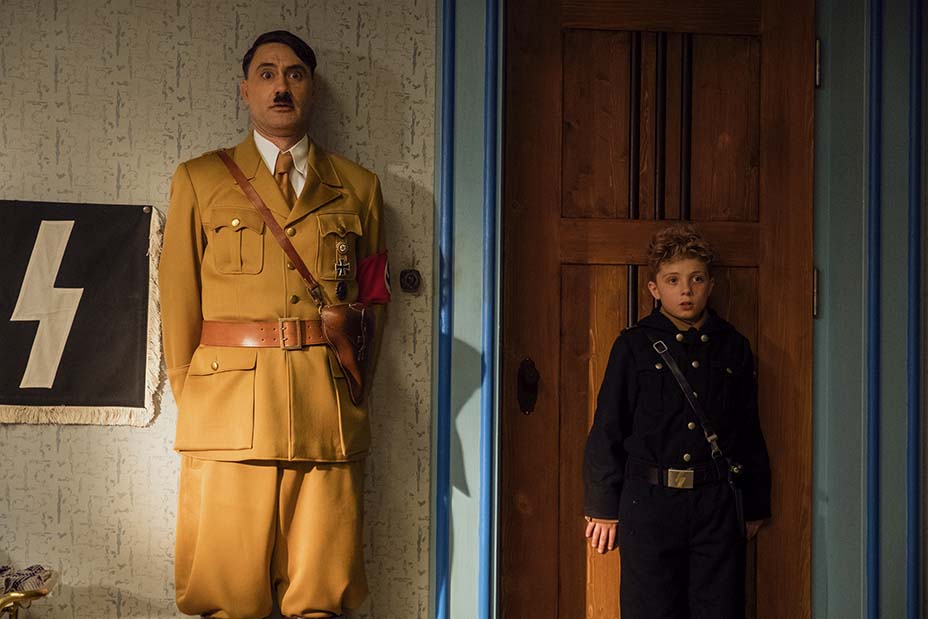 As for the clothes worn by Waititi’s scatterbrained clownish Hitler, Rubeo says, “while this Hitler was just a suggestion only, we had to get his suits right because it’s historical.” This translated into his brown paper bag-colored uniform made up of a khaki shirt, safari-style belted jacket and “a voluminous pair of riding pants” with a swastika patch.

Uniforms were also needed for JoJo (Roman Griffin Davis) and his fellow “Jungvolk” comrades (the film’s version of The Hitler Youth). Rubeo based those clothes on original designs she found in Berlin and made in multiple sizes for the cast. “The idea behind the look was that JoJo was trying to be the little policeman of his household,” the designer says. 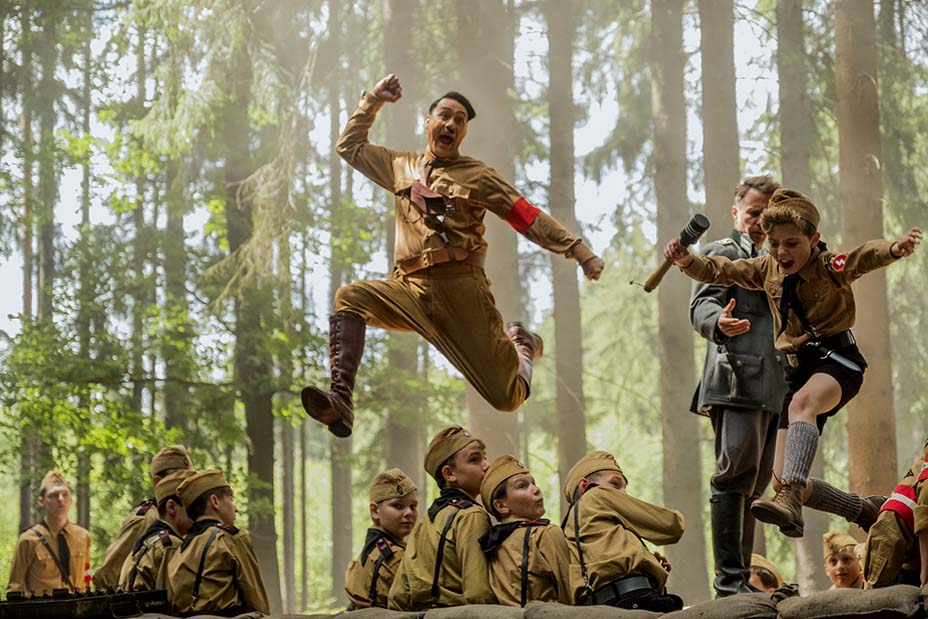 Sam Rockwell, whose Captain Klenzendorf portrays the Jungvolk’s flamboyant leader, first approached Rubeo with a simple request, as the designer reflects, “He came into my wardrobe trailer with a picture of Bill Murray from Saturday Night Live and said, ‘This is who I want to look like.'” The look for the character, who goes for a more unorthodox and heroic departure from the regimented military uniforms (think “colorful and homemade”) as the end of the Third Reich is on the horizon, was conceived by the designer as “a uniform made by someone who knows almost nothing about the rules of design.”

In designing the wardrobe for JoJo’s mom, Rosie Betzler (Scarlett Johansson), Rubeo went for a chic look. Historically women of the period wanted to be fashionable and more formally dressed amidst all the pending gloom and doom. Researching the looks of the era, the designer first created mood boards with everything from smart, architecturally inspired hats and tweed, plaid and zigzag Missoni-style patterns to high-waisted baggy pants and colorful short-sleeve sweaters. 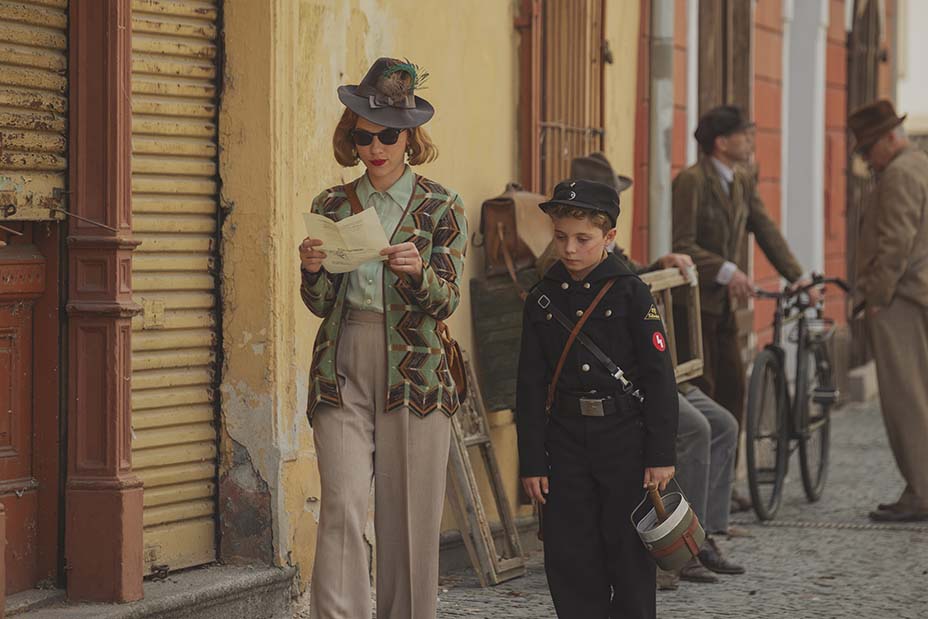 The majority of the clothes were custom made, along with a few vintage pieces from Italian costume houses. “Rosie had class and taste, and I wanted to portray her in a way that she might have been a friend of Elsa Schiaparelli who would have had the designer do something for her in better times,” says Rubeo. “I flew to New York to meet with Scarlett, and she is such an artist and knew exactly who her character was. We decided she should wear pants as this was an era when pants came into fashion but [were] not accessible to many people.”

Since Johansson’s character had an artistic background and hides a young German girl in her house, the designer dressed her in lots of color, detailing, “Color was important in the movie and I wanted to show that part of the ‘heart’ there was during wartime and the sacrifice for a good cause.”

Accessories also played a part in portraying Rosie, particularly a pair of single lace-up red and white spectators with butterfly accents made by the Toronto shoemaker Jitterbug that serve as an integral plot point in the film. Other accessories included hats — snoods, turbans, cloche and felt bowlers with feathers — and, as Rubeo notes, they didn’t have the proper head blocks at the time to make them. “Two things during wartime a lady would have were hats and, of course, stockings.” 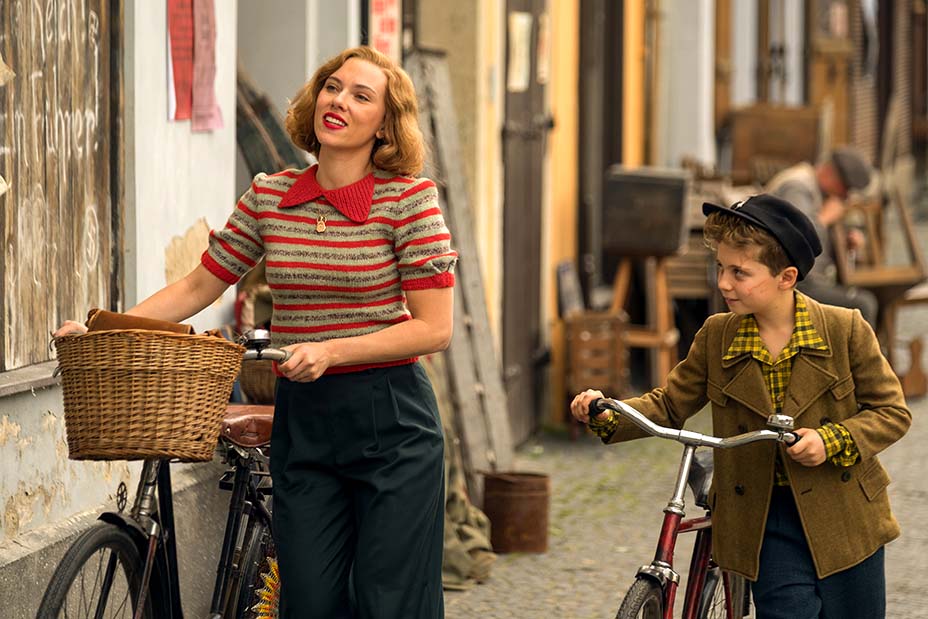 Taika Waititi on Playing Hitler for Laughs in 'Jojo Rabbit': "I Felt Weird About It"