Venice is locked in a love-hate relationship with its tourists.

The hordes of foreign visitors that flood into the picturesque Italian port city — an estimated 30 million each and every year — are the lifeblood of the Venetian economy, financing everything from hotels, restaurants and bars to the city’s craft and souvenir shops and its iconic gondoliers.

But the combination of low-cost flights, Airbnbs and flotillas of giant cruise ships, is “killing Venice,” according to Marco Gasparinetti, 55, a spokesman for Gruppo 25 Aprile, an advocacy group representing 2,000 citizens of the city. He notes that tourists outnumber residents in Venice 140 to 1, with peak days seeing cruise ships dropping upward of 44,000 onto the city’s narrow, cobbled streets.

“When I was a child we could play football in the streets. The air quality was amazing,” says Gasparinetti. “Now because of the cruise ships, we have the same air quality and noise pollution of any major city, yet have to live with the difficulties of a pedestrian city. Our unique way of life has been lost. We can no longer take our children to school or go shopping by boat. All the waterway space is taken up by cruise ships and hotels bringing in supplies. Residents aren’t even allowed to use the canals until midday.”

Even the 900-year-old fish market is at risk of closing down as tourists happily snapping Instagram photos of the incredible architecture are replacing actual customers. “Venice without Venetians is not Venice anymore,” he says. “You’re killing a civilization, the civilization of people living in the water, for more than 1,500 years.”

Gasparinetti blames the day-trippers who cruise in or fly in for a few hours, “take a couple of selfies and they leave again. They leave garbage. They don’t buy anything. The government is making an easy profit, but the city is dying. 1,000 craftsmen have lost their jobs,” he says.

The local population has collapsed. Right after World War II, there were 175,000 year-round residents in Venice. Today, that’s down to about 50,000. Most locals cannot afford to live in the city, unless they have inherited property. They refer to the city as “Venezialand,” a Disneyland at sea, commuting in from the industrial Mestre, to service tourists.

In response, the City of Venice took the unusual step of trying to rein in the most gauche day-tripper behavior. The #EnjoyRespectVenezia campaign includes fines for riding or even pushing a bicycle, lying down on a city bench, feeding the pigeons or walking around in a bathing suit. Dare to swim in the canals, a major Venetian no-no, and you could be slapped with a $510 (450 euros) ticket.

Venice has also announced plans to ban cruise ships entering the Giudecca Canal, partially in response to a threat by world heritage body UNESCO, which said it would put Venice on its list of endangered sites unless the city took action. But the ban, which will take four years to implement, will only apply to the giant ships, weighing over 100,000 tons.

Smaller cruise ships, or 55,000 tons or less (“small” is relative here, the Titanic weighed 52,000 tons) will continue to enter the Giudecca Canal, and locals have attacked the plan as simply opening another route for the ships. The giant ships will come via the neighboring town of Marghera, which even if slightly further away, still poses huge threats to the city’s pollution and seawater levels. 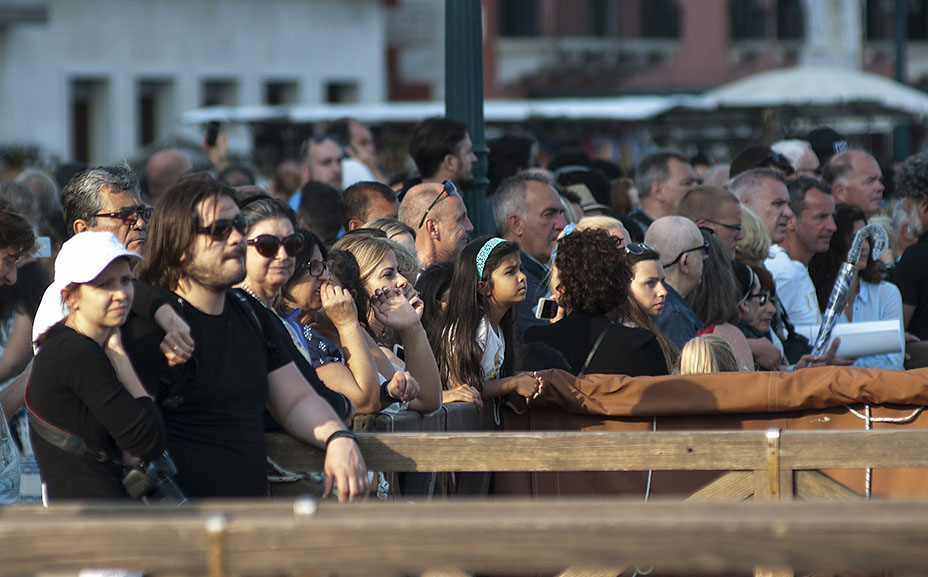 Tourists line up in Venice.

“We’ve created a development agency to act as a catalyst for new investments and new jobs in the city,” says Venice’s tourism chief Paola Mar, who says measures to restore and rent hundreds of city-owned apartments to young couples and residents are aimed at keeping young people in the city.

“Words, only words,” sniffs Gasparinetti, noting that there hasn’t been a single apartment allotted since the city announced the plan three years ago. And that during the current mandate of Mayor Luigi Brugnaro, Venice has so far lost 5,000 residents. Gasparinetti blames the mayor for selling off public buildings, including the former police headquarters, to be converted into hotels. “He’s unable to understand our way of life. He’s nouveau riche and thinks money is everything. In Venice we have a different set of values,” he says. “In the old days dignity was everything. Today there’s a real clash.”

If the cruise ships and tourism don’t destroy Venice, the rising seas might.

La Serenissima, as Venice is traditionally known, is sinking by an average of 2 millimeters (about one-twelfth of an inch) per year. Add to that rising sea levels of another 2 millimeters annually, and you can see why locals fear the waves almost as much as they do the cruise ships. Venice has a grand plan, called MOSE, to install an underwater system of retractable gates and flood barriers. Various scandals covered up bad designs and government officials, including the mayor overseeing the project, skimming millions off the project budget. And worse, if it does end up working, the system will only work against very high tides and not the far more common “medium” tides.

As of today the structures are eroded by mold, seawater and even mussels, preventing the gates from functioning. Originally meant to launch in 2011 at a cost of $1.8 billion, the project is hoping to function by 2022 at the earliest, with a current price tag of $6.2 billion and rising.

The island of Lido, home to the Venice Film Festival, could actually help steer over-tourism away from Venice’s crowded centers as it tries to rebrand itself as the upscale beach resort town it once was. The rundown Excelsior hotel and the abandoned Hotel des Bains are both scheduled for renovations, along with new beach cabins lining the coast. And unlike in the historic center proper, bikes can roam freely along the Lido coast.

Many hotels and restaurants on the Lido are already trending toward ecotourism, but they are unlikely to sway the day-trippers away from their cruising lifestyles. If the film festival hopes to have a home in 50 years, it will take much more than an alternate cruise route to save the Floating City.

The Blessing and the Curse of Filming in Venice