In 2013, Quentin Tarantino said Bong Joon-ho was like “Steven Spielberg in his prime.” And with each new release from the South Korean director, the compliment seems less like hyperbole.

Several other South Korean filmmakers will be in attendance at Cannes this year, including 2017 jury member Park Chan-wook, who will be judging your film opposite Hong Sang-soo’s latest, The Day After. Some Korean titles were also selected for Midnight Screenings. What does this mean to you?

A film festival is not like the Olympics, so nationality doesn’t really matter. But an assortment of Korean films will undoubtedly add to the diverse menu that is Cannes’ lineup, and this is very exciting. I’m also actually really happy that two of the three Midnight Screenings are Korean movies. As a genre film director myself, I see this as a sign that Korean genre films are doing well.

Netflix invested $50 million in Okja. What was it like to work with the streaming giant?

Well, if I were an investor-producer, I think even I would have found Okja difficult. The storyline is quite unusual, yet it requires a big budget. Major studios with money would be uncertain about the unique plot, while smaller film companies that like the script would hesitate over the cost. Netflix, however, was enthusiastic and fully supportive. I was happy to be guaranteed 100 percent creative control, including final edit. I am very, very fortunate to have had such artistic freedom with a $50 million-plus project.

While offering amazing opportunities to some creators, Netflix also has brought some disruption to the traditional film distribution and exhibition landscape. There was conflict between French exhibitors and Cannes over the selection of Okja and other Netflix titles. How do you feel about this?

I’m not deeply knowledgeable about these things since I’m not a distributor, but the disputes are interesting. I must say, things have been settled in a promising way. Back in the 1960s, people were saying the introduction of television meant the end of cinema. I see today as an era of co-existence, between cinemas, TVs and smartphones/tablets. I bet many of the French distributors also watch Netflix at home.

There are those like Park Chan-wook who insist that cinemas are still the best place to watch movies. Others think this is rather conservative. What’s your take?

I don’t agree with the notion that prioritizing cinemas is conservative. But movies that are beautiful on the big screen are good to watch on tablets as well. When I first began talking with Netflix, I was aware that it would be for an online streaming platform, but I entered the deal under the condition that Okja would also receive a theatrical release. I then filmed Okja in the same way that I worked on my other movies. 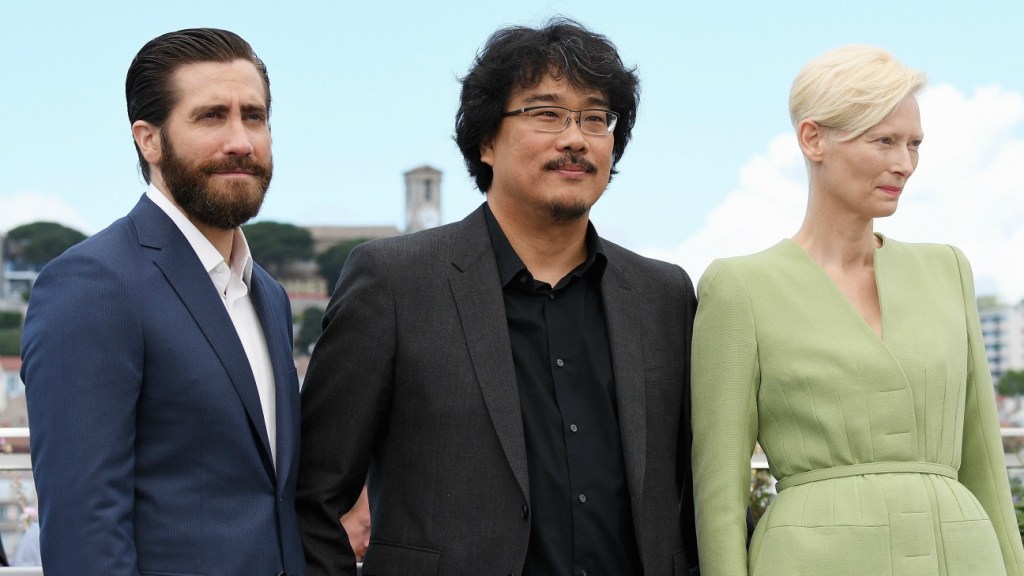 Back when Snowpiercer came out, you said you no longer wished to work on big-budget projects. What changed?

CJ Entertainment invested and distributed Snowpiercer and was very supportive in terms of creative freedom. Later on, there was a bit of tug-of-war with The Weinstein Company [which handled North American rights] over the editing. But companies have their own style just like how filmmakers have their own approach to things — and in this case, Weinstein has been known for re-edits. In the end, however, Weinstein also released a director’s cut version of Snowpiercer. I am among the rare filmmakers out there who has had director’s cut releases of their entire filmography.

Any nervousness over the Cannes premiere?

It’s a bit heart-fluttering and nerve-racking for sure, but I want to show it as soon as possible. That way I can talk about the film and share thoughts and feelings about it with more people. There are so many rumors about the film right now, but mostly concerning extraneous factors like money matters, distribution issues, and so on. Once it’s out, people will be talking about the story itself — and probably controversies as well, but in the most positive sense.

Your films tend to elicit a response of strong like and dislike, and this kind of reaction seems louder and more immediate in the age of social media.

I’m reading a book on Stanley Kubrick right now, and even he was subject to lots of criticism every time his films hit theaters. And this was a time without the internet. His legendary works were a topic of controversy and debate. I believe this is the essence of the medium that is film, and I think it’s quite fun and intriguing. I’ve also become rather equanimous about these things more than anything else. 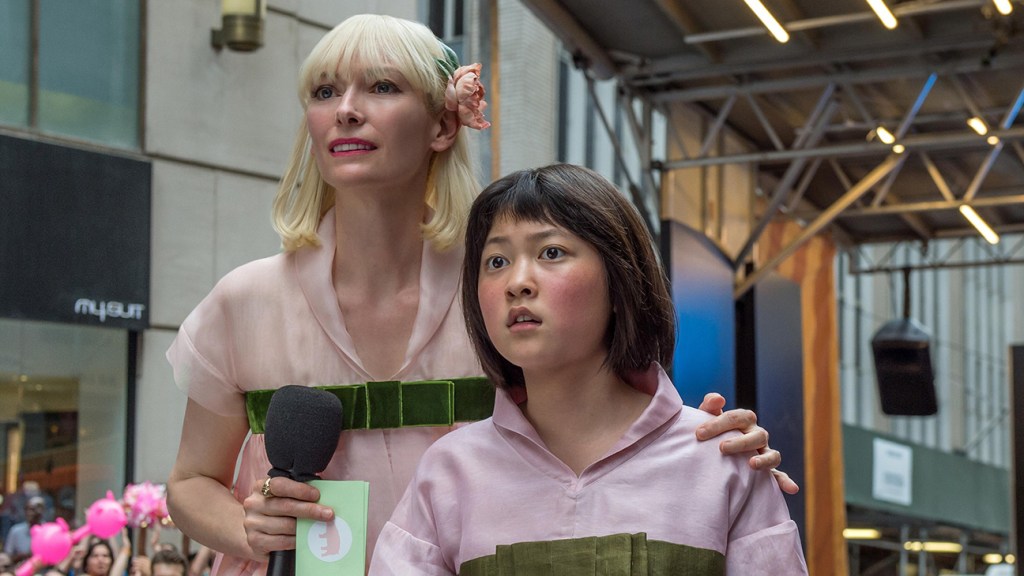 This is your second consecutive time working with Tilda Swinton after Snowpiercer. How did it go this time?

It was such a fun collaboration. For Snowpiercer, Tilda was cast after the script had been completed and we changed what was initially a middle-aged man into a woman. We became very close friends through Snowpiercer, and she became deeply involved in the making of Okja even before I wrote the script, when I showed her my illustrations. We have become each other’s muses in a way, and Tilda truly is the spinal cord of the film. She plays the CEO of a bio food company — similar to Wilford of Wilford Industries in Snowpiercer.

And how about Jake Gyllenhaal? What can we expect from him in your film?

Jake has been following a surprising path in recent years and has been building an incredible filmography. … I think he deserved an Oscar nomination for Nightcrawler. He again plays a very odd role in Okja. I first met him in L.A. in 2007 because we were represented by the same agency, so we’ve conversed from time to time. He watches a lot of Asian movies, including Korean ones, and he’s also worked with Asian directors like Ang Lee. He said yes not long after receiving the script for Okja, so I was very happy. He can do the eyes of a crazy person, and I’ll just say that he shows a lot of this in my film.

Any more hints about Tilda’s performance?

Okja will show just how much an actor is capable of dominating the texture and structure of a film. Tilda doesn’t appear in all of the scenes. But she rules over the whole thing. The film will show what screen presence is.

How would you describe the titular animal in Okja?

Okja is sort of like a manatee hailing from Miami, Florida, but also a mix of a pig, hippo and elephant. Basically, big and super kind; a gentle giant who is very introverted. I started writing the script because of [her]. I first envisioned this animal while driving around back in 2010. It was one afternoon in Seoul.

You’re no stranger to metaphoric creatures/animals, such as the monster in The Host. What did you want to convey through Okja?

I wanted to talk about the relationship between animals and humans. To sound rather grandiose: we co-exist in this age of capitalism. If you think about it, animals are also experiencing capitalism along with us. There are many layers to this, but in the end, Okja is really a love story. It’s a love story between a young girl and her dear animal friend, and in love stories there are almost always obstacles. In Okja, Tilda Swinton is that impediment.

You seem to be fond of animals. Do you have any pets?

I have a pup named Jjun. He was an abandoned dog. He’s 3 and is very eccentric. I think anyone who raises animals will be able to watch Okja in a heartfelt way. 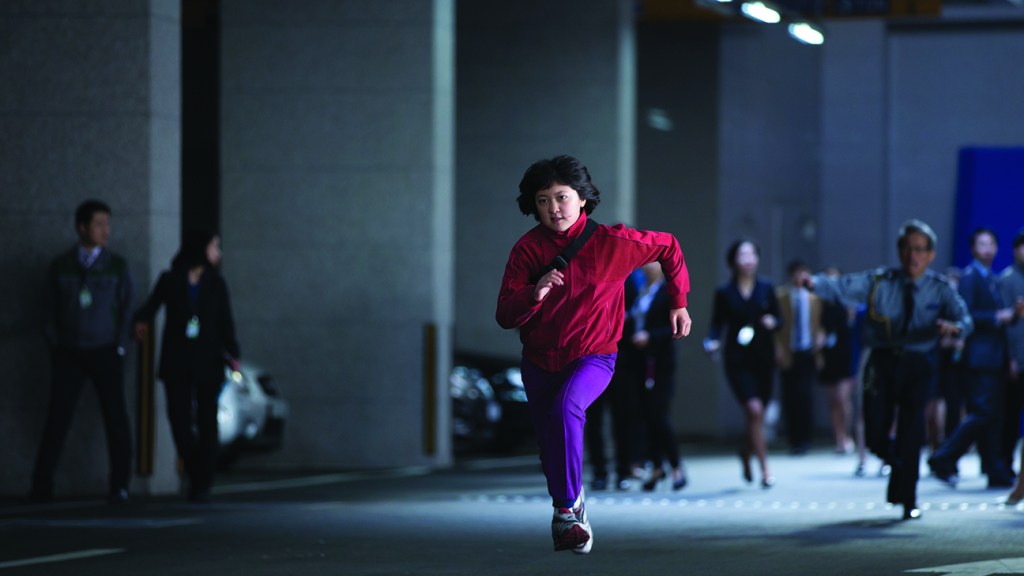 Your film features unique female characters, from Tilda Swinton serving as the ‘spinal cord’ of the story to Ahn Seo-hyun as the young girl protagonist. This certainly is welcome for Korean cinema, which lacks female-driven films.

Okja herself is female. [Okja is a common, if slightly outdated, Korean female name.] I didn’t go into the film really thinking about [gender issues], and I don’t know if I remotely qualify as a feminist. But it is true that Okja is female and that I had a young girl in mind since the beginning. I honestly don’t know why, but I just liked the idea of this stone-hard young girl going against all odds in a larger-than-life journey.

Women are usually much smarter, you know. Men are pretty stupid, I think. We’re a combination of idiocy and pretentiousness. [Laughs] But in any case, I think it’s more accurate to say the film presents the perspectives of a child and an animal, rather than a female per se.

You are known for drawing storyboards yourself. Do you feel that you were able to realize what you had envisioned?

I tried my best to re-create everything. I’ve been talking to Netflix about publishing a book of illustrations featuring the artwork I created together with conceptual artists and storyboard artists. There are a lot of books like this in the U.S. but not Korea, so I really hope it happens.

This story first appeared in the May 21 Cannes daily issue of The Hollywood Reporter magazine.