He’s a bespectacled English boy with a destiny that teases his magical powers, and he sometimes has a best friend who’s an owl. But DC Vertigo’s Tim Hunter isn’t Harry Potter, as his return in the new Books of Magic series this week will make clear. The Hollywood Reporter talked to writer Kat Howard about the new series, and also has an exclusive preview of this week’s debut issue.

For all the similarities between Hunter, a creation of Sandman writer Neil Gaiman and artist John Bolton, and J.K. Rowling’s massively successful Hogwarts student, the two are ultimately very different characters in very different stories. Tim Hunter actually preceded Harry by four years (he debuted in 1993’s first The Books of Magic series) and has been at the center of a number of different comic book series across the years that have illustrated his search for identity, belonging and, of course, understanding about the magical abilities he has.

In the new Books of Magic series — one of four series that make up DC Vertigo’s Sandman Universe imprint — Hunter returns to basics, as a high school student who understands almost nothing about what he’s capable of, and has only the slightest inkling of how strange and wonderful the world really is. Illustrated by Tom Fowler, the series is written by fantasy author Kat Howard (Roses and Rot, An Unkindness of Magicians).

THR talked to Howard about what lies ahead for Tim Hunter, and some familiar faces to longtime Gaiman fans that populate the new title.

How did you get involved with the Sandman Universe, in the first place? I know that you’ve appeared in an anthology edited by Neil Gaiman before, so clearly he was aware of your work…

Yes, Neil and Al Sarrantonio bought the first short story I sold, “A Life in Fictions,” for their anthology, Stories. I’ve known Neil since I attended the Clarion Writers Workshop in 2008 — he was one of the instructors that year, and he’s been a friend and mentor ever since. Still, I was completely surprised when Molly Mahan, who is now my editor, contacted me about whether I’d be interested in writing comics for DC Vertigo — yes! — and then even more so when she told me what the project I’d be pitching for was — Very yes! I’m utterly thrilled at being part of the Sandman Universe, and I’m having the best time writing Books of Magic.

What kind of research did you do ahead of writing the series? There are the obvious Gaiman influences, of course, but what else did you look at, or are still looking at? What else feeds into the new series?

One of the pieces of the “what else” that I’m really having fun with is researching books as physical objects. I’ve been spending a lot of time thinking about things like medieval illuminated manuscripts, and chained libraries, and all sorts of cool and strange book facts. I’ve also been reading a lot on the history of magic (stage magic, sleight of hand, that sort of thing). And yes, obviously, things like comics and storytelling of all sorts are present there — in a way, my whole history of reading is a foundation for anything I write — but those are a couple of pieces where I’m making specific effort to find things for this story.

There was some surprise amongst the audience at the de-aging of Tim Hnuter from the earlier Books of Magic series and spinoffs for the new run; he’d grown from an adolescent into an adult in prior runs. What was the thinking behind that?

I think it allows us to focus on different aspects of Tim’s life. By beginning early in his involvement with magic, we can see the way that gift affected him, and we can also see the consequences of the responsibility that came with his ability. For me, one of the most interesting parts of Tim’s character is that there are two possible ways the prophecy can go, for good or for ill. And so seeing from the beginning his reaction to that, and the choices he makes, I think it gives us something really powerful to build on as we continue to tell his story.

Something that will appeal to longtime Gaiman fans about the first issue is how you’re underscoring the idea of the Sandman Universe, intentionally or otherwise, by using characters from other Sandman-related works: Mad Hettie, who initially debuted in Gaiman’s first Death miniseries, makes an appearance. Her friendship with Tim was at once a surprise and something that makes complete sense, helping illustrate another side to Tim.

Thank you! Mad Hettie has always been one of my favorite characters, and getting to write her is such a joy. And one of the things that I always loved about reading Sandman was the way there were these characters that would show up on occasion, and play key minor roles. For me as a reader, that was one thing that made me really feel like I was reading a world, and so I’m trying to bring some of that into my own storytelling.

Spinning out of that, in a way — the first issue of Books of Magic establishes itself very much as its own thing, both in the wider Sandman Universe line, but also inside the magical boy genre, if there is such a thing; there’s no chance a reader could get to the end of this issue and continue to mistake Tim for Harry Potter. What makes him unique to you?

So, like many millions of people, I’m a huge Harry Potter fan. I’ve read and reread the books, went to a midnight release party for the last one. They’re great. And one of my favorite things about those books is the very immersive magical world that Rowling created, and that the series focuses on. For me, one major difference, and one important thing that I’m focusing on in Books of Magic, is that Tim lives in the mundane world, not a magical one. He still has to deal with things like algebra, and there are definitely problems that he can’t solve with magic.

So, what kind of problems are coming up, either magic or otherwise? Are there more elements from earlier incarnations of Books of Magic that you’ll be bringing in for longtime fans?

One thing I am extremely excited about is that we’re actually going to get to see what the Books of Magic are. We’ll see Tim learn how to use them, and use his magic. Unfortunately for Tim, the Cult of the Cold Flame is very much present and determined to make things difficult for him. Readers will see other familiar characters from Books of Magic and Sandman, and new characters who have agendas of their own. We’ll see other parts of the Sandman Universe, and we’ll see the power of what can happen on Tim’s own street.

Books of Magic No. 1 will be released digitally and in comic book stores Wednesday. Read on for a preview from the issue. 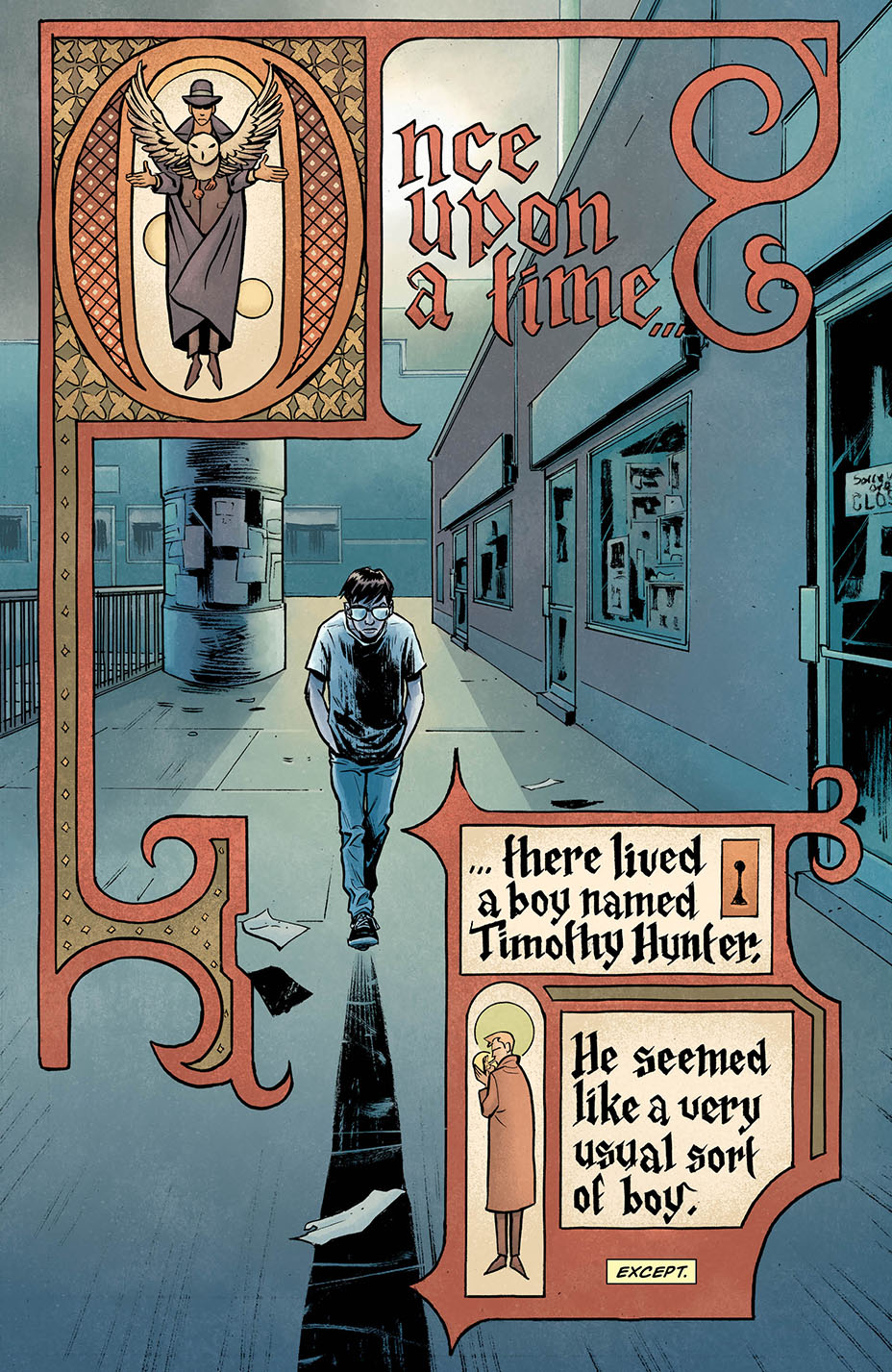 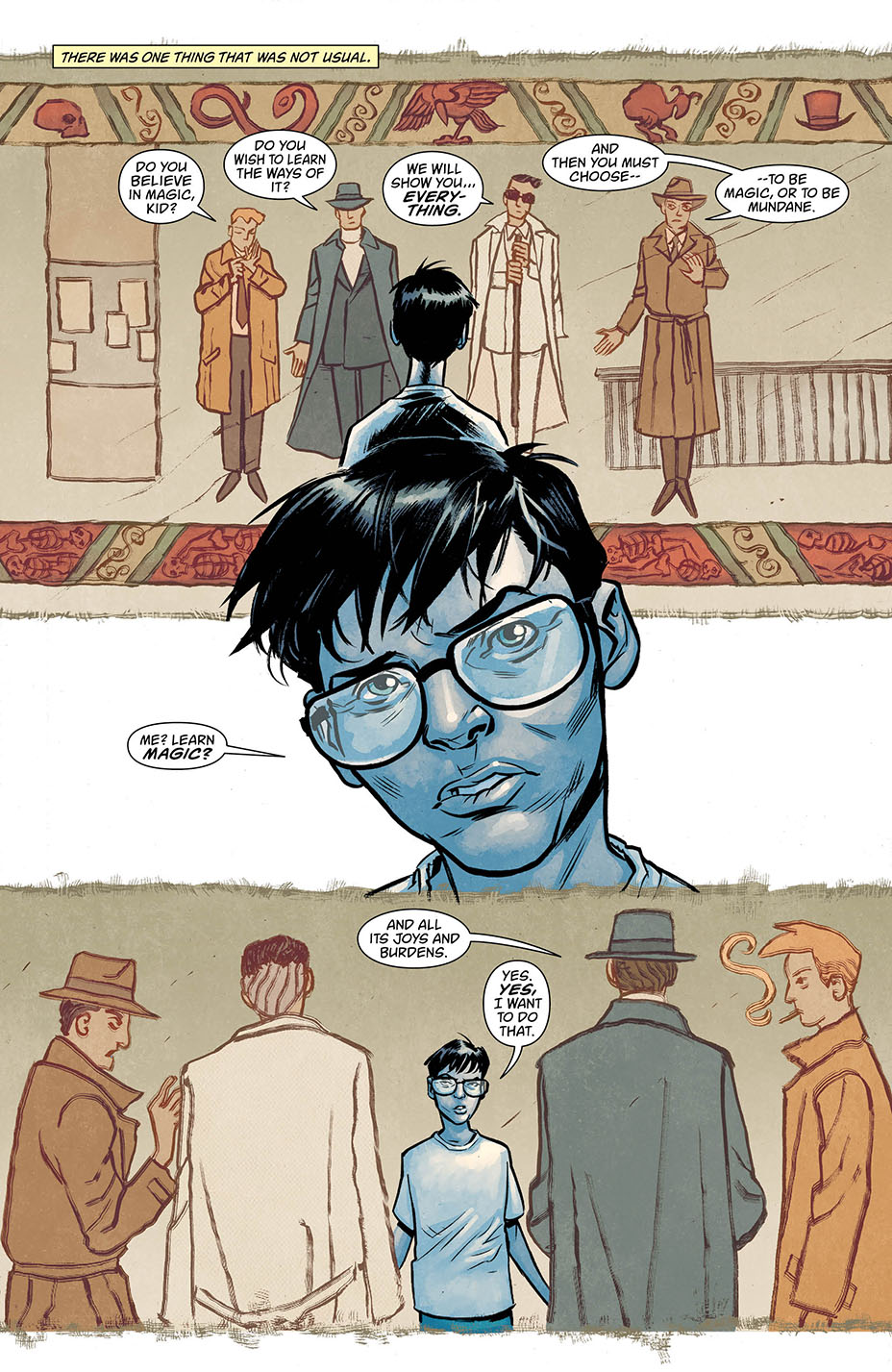 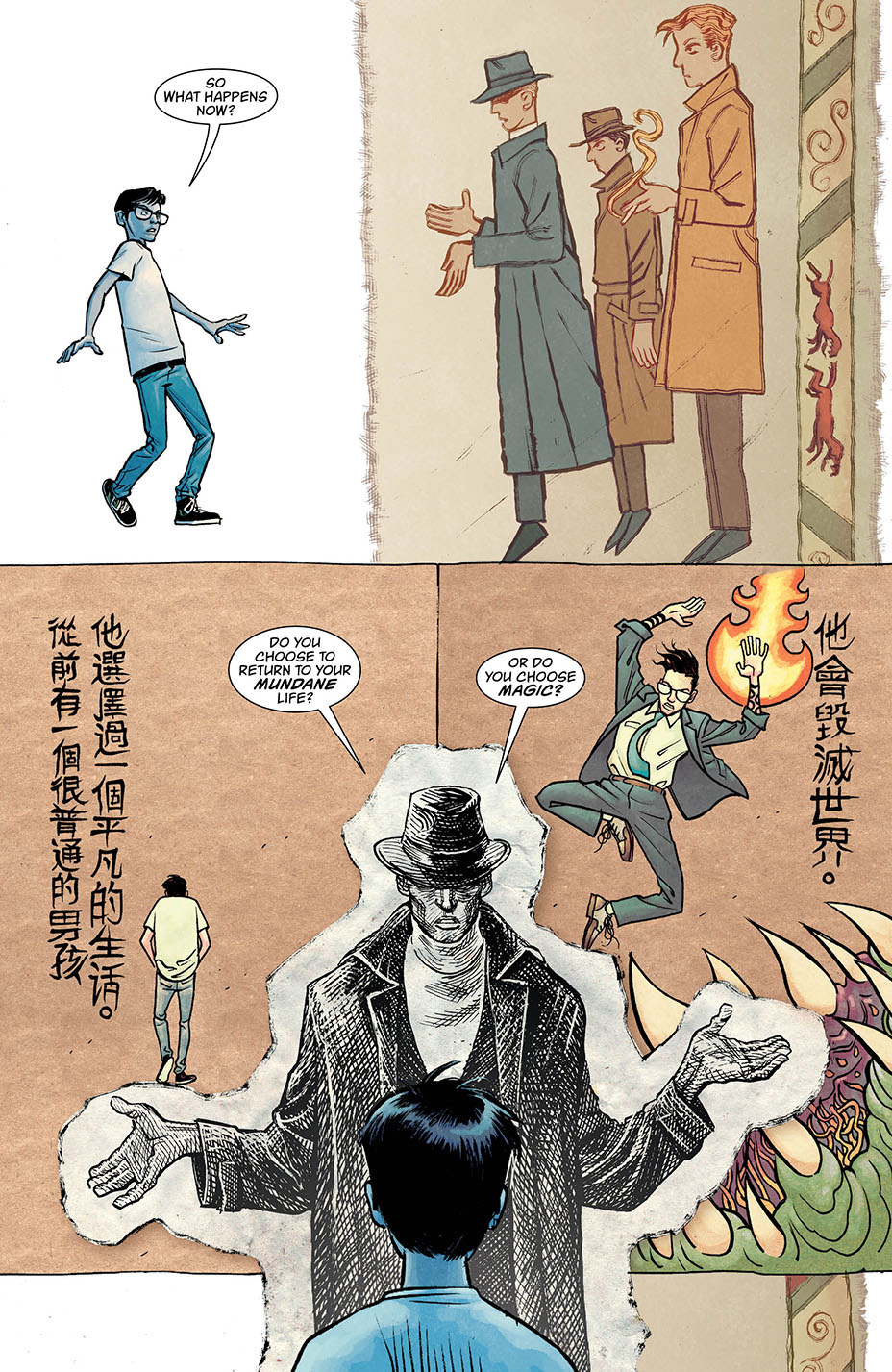 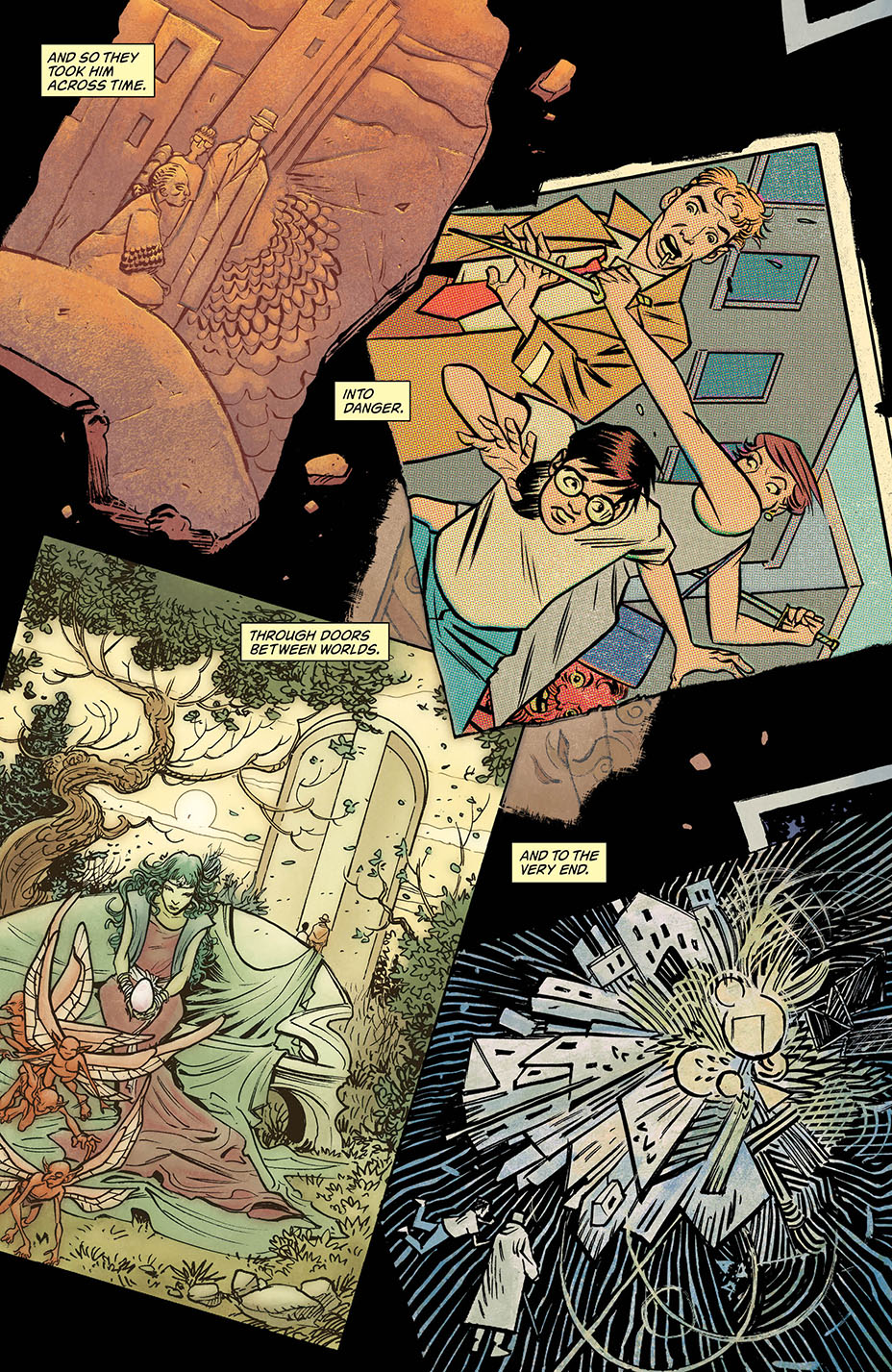 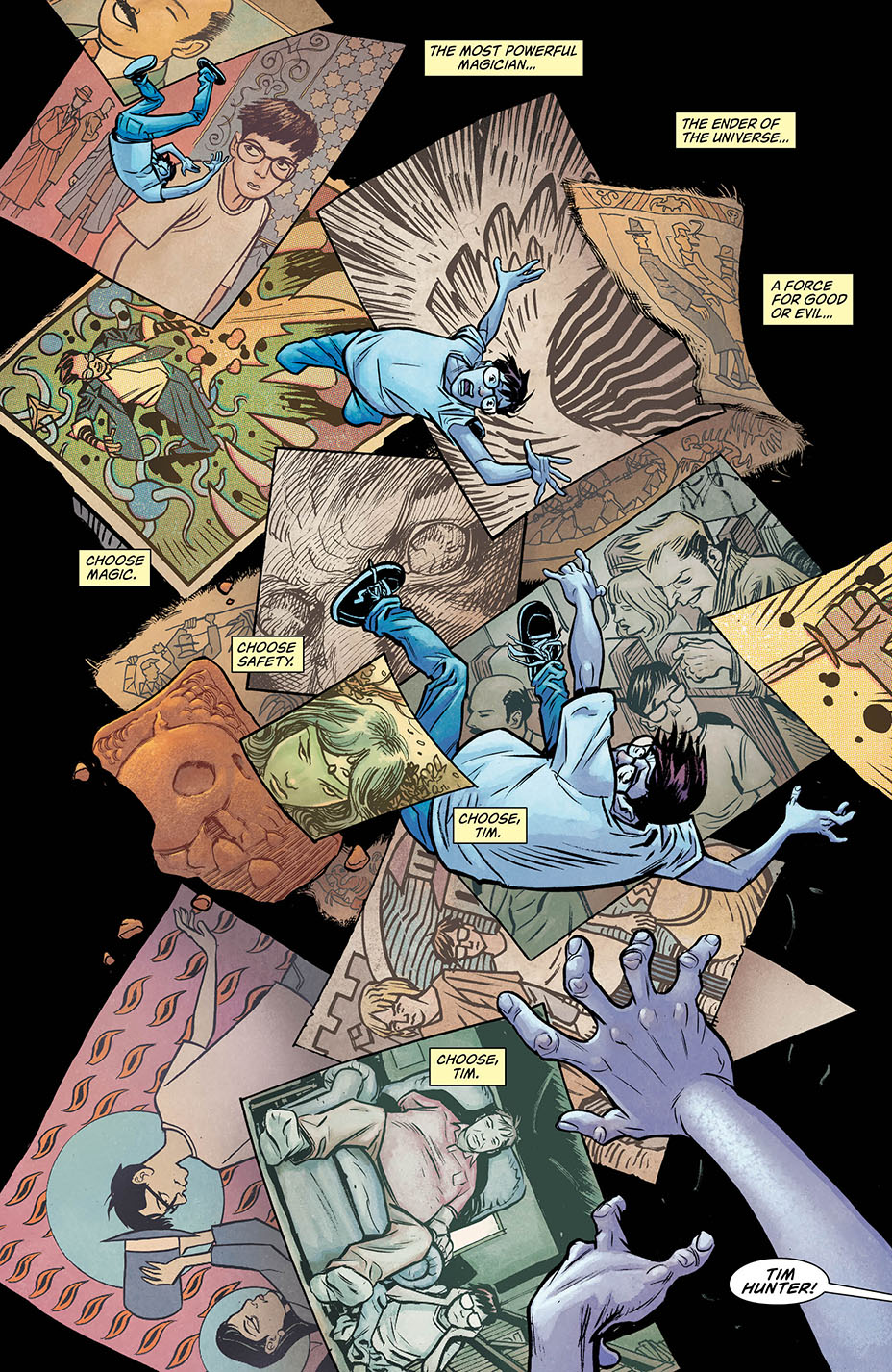 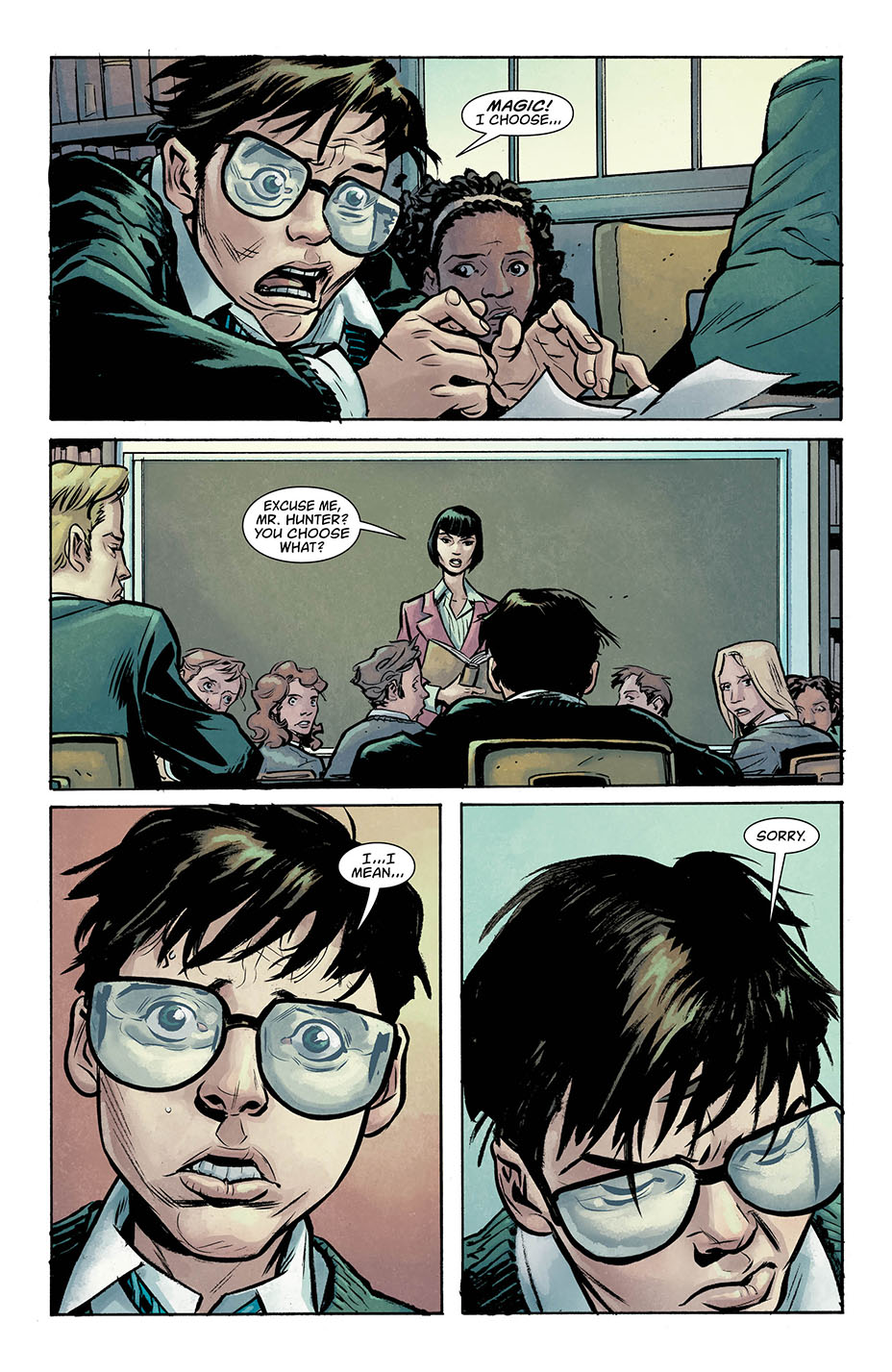 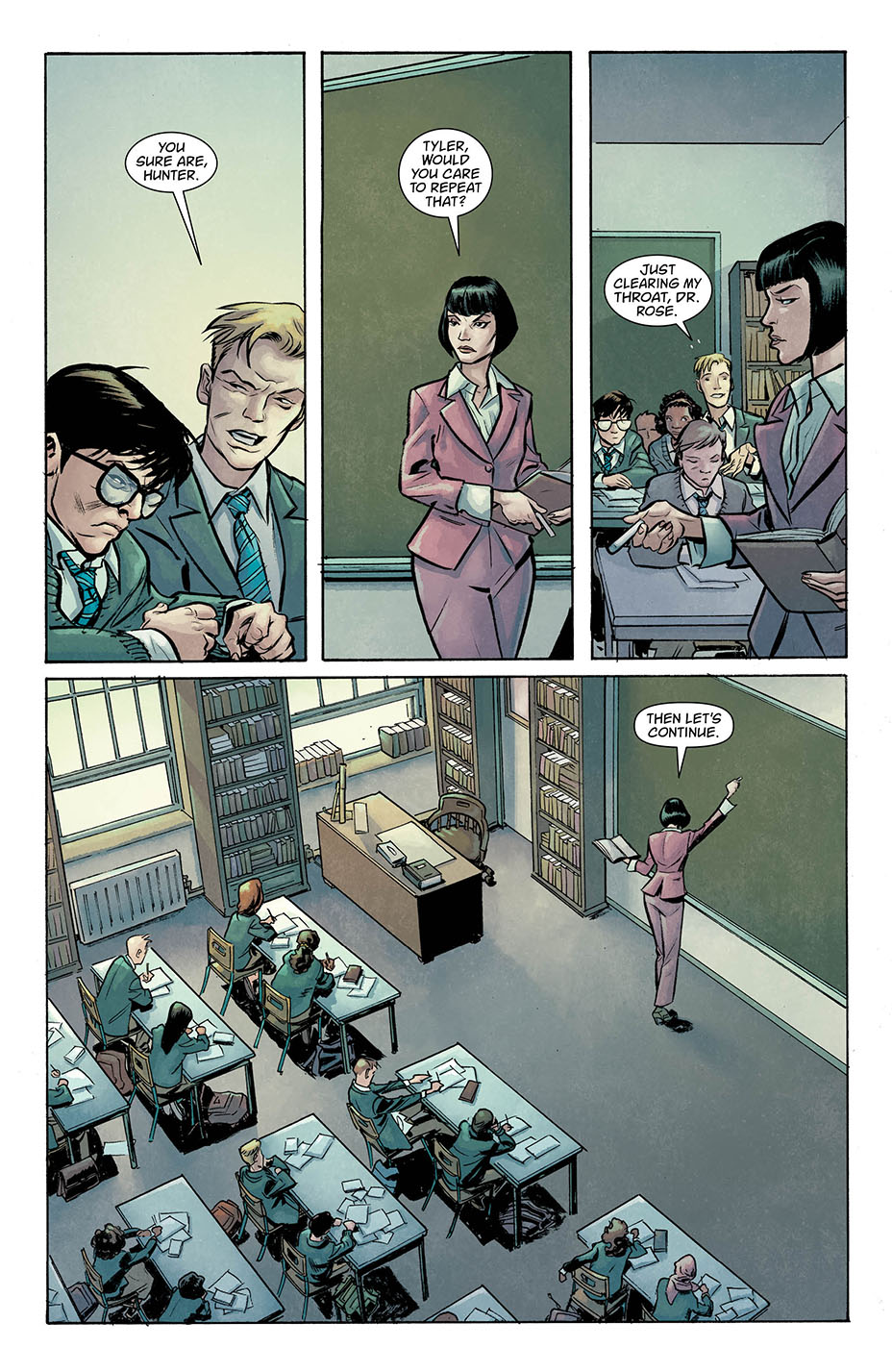 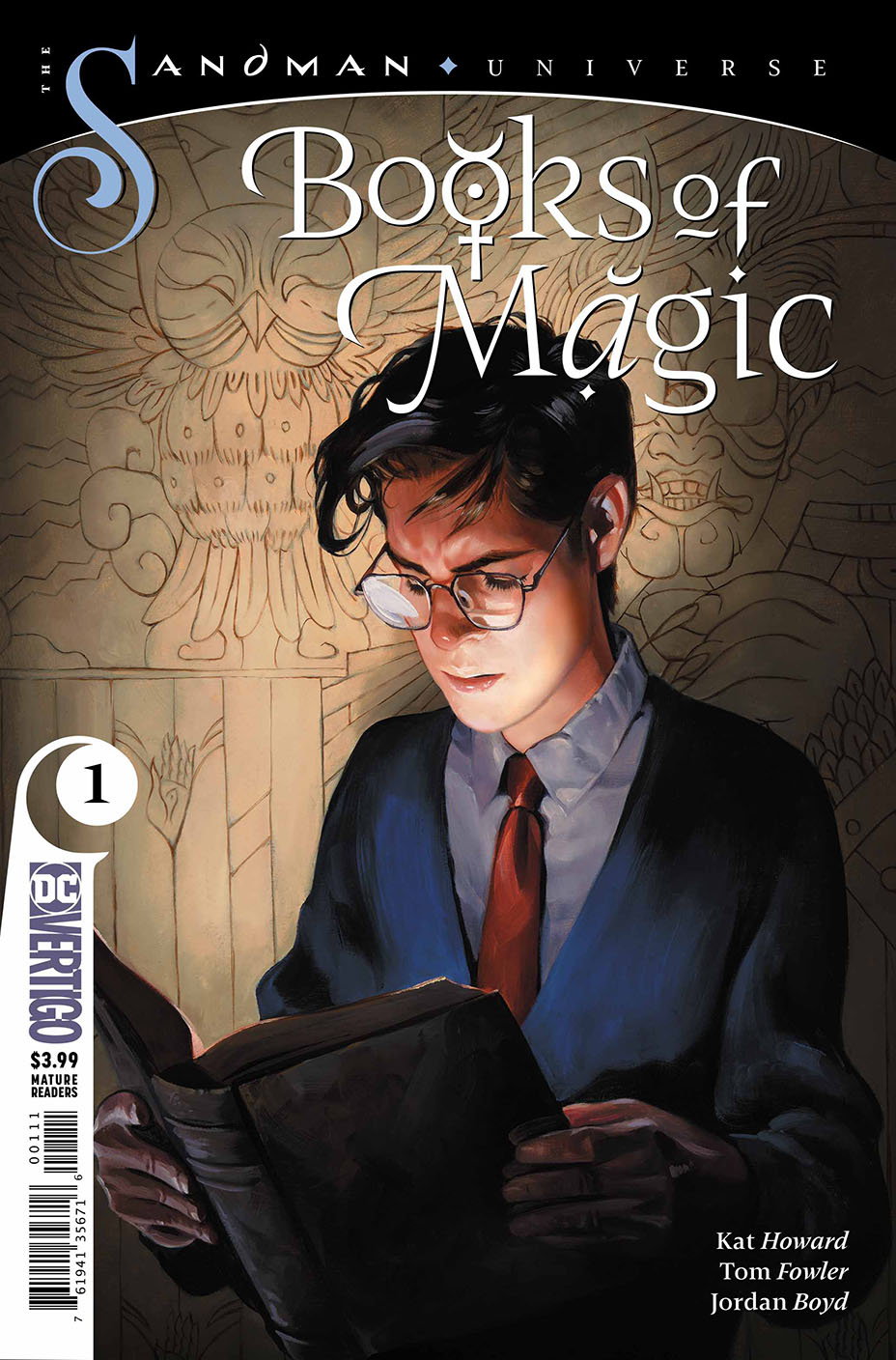