Canadian Prime Minister Justin Trudeau proudly displayed his progressive bona fides three years ago when he announced that his 30-member Cabinet would be the country’s first to represent men and women equally, 50- 50. When asked by a journalist why, he made global headlines with his blunt reply: “Because it’s 2015.”

Roughly a year later — and well before the #MeToo and Time’s Up movements — Telefilm Canada, the powerful, well-funded film financing arm of the Canadian government, followed Trudeau’s lead and unveiled its own ambitious drive to achieve gender parity in the film sector by 2020. The goal was clear: The agency would choose which films to finance based on whether projects were directed by, or revolved around, women (among other criteria).

The initiative already is having an effect: A 2017 Telefilm study shows a 27 percent increase in agency-backed projects directed by women since 2015. And it’s not just Telefilm: The National Film Board of Canada, the Canadian Broadcasting Corp. and the Canada Media Fund also have unveiled plans to achieve gender parity by 2020. But with its deep pockets — the agency invests around $100 million annually in homegrown filmmaking — Telefilm is leading the way.

“There are systemic barriers to funding,” says Federal Heritage Minister Melanie Joly, a close ally of Trudeau. “We believe that we should, as a feminist government, have a clear commitment to overcome these barriers.”

The practical initiatives from Telefilm include its Talent to Watch program, formerly the Micro-Budget Production Program. Telefilm renamed and revamped the 5-year-old micro-budget program in November with a mandate to back 50 first-time and, where possible, female-led features annually, with investments capped at $120,000 for each movie.

That in turn led organizers to consider how they could help maintain a young filmmaker’s momentum in the industry after completion of that all-important first project. So, also in late 2017, Telefilm unveiled its Fast Track program, which assures $500,000 in second-feature financing for filmmakers producing internationally recognized first features.

To promote female voices and visions, Telefilm, when considering funding for projects of equal value — determined by such factors as the script, talent attached and the production team — between a male or female applicant, is favoring projects directed and/or written by women. “We want to create a path to success,” says Telefilm executive director Carolle Brabant. “We want to reward the success of the first features by having emerging directors make their second film.”

Take Werewolf, writer-director Ashley McKenzie’s debut feature about youth and drug addiction in a small Nova Scotia mining town. The indie received microbudget financing from Telefilm and became a critical hit on the film festival circuit after bowing at Toronto and screening at Berlin.

Now McKenzie is eyeing possible Fast Track financing as she develops her second feature. “There’s a gap for filmmakers to take the next step after their first feature,” she says, adding that Telefilm has helped to shorten the time she and her producer Nelson MacDonald need to secure financing for their sophomore effort.

6 Canadian Directors to Watch: "Making Unsettling Films Which Challenge Ourselves"

Brabant says Canada’s push for gender parity has helped alter long-standing perceptions in an industry where female filmmakers have become accustomed to discouraging barriers to the industry. “It has made women realize, ‘Well, it can happen,’ ” she says. “It’s comforting to know you can get your foot in the door,” adds Sonia Boileau, who leveraged Telefilm investment for her debut feature, Le Dep, to develop her second film, Rustic Oracle, about an 8-year-old Mohawk girl searching for a missing sister.

The push for gender parity has implications beyond Canada. Jordan Canning, who directed more than a dozen short films before completing her first and second features, We Were Wolves and Suck It Up, respectively, says Telefilm’s Talent to Watch and Fast Track programs can help open doors in the U.S. and other foreign markets.

“Once you have two features, you’re hopefully at a level where you can access funding in different countries and team up with international co-producers,” she says.

With the various gender-parity initiatives gaining steam, insiders say the lure of financing is also leading filmmakers to rethink projects from the conception point. “In the general community at large, people are just hungry to attach women to projects and slates, because it’s smart from a tactical viewpoint. I’d do the same,” says Molly McGlynn, whose debut feature, Mary Goes Round, was produced through Telefilm’s Talent to Watch program.

The Canadian film sector is also focusing on hiring more women in key positions throughout the industry. Jane Tattersall, senior vp at Sim Post Toronto, who supervised the sound editing on Hulu’s The Handmaid’s Tale, says she’s hiring more women as mixers and editors in a traditionally male-dominated business. 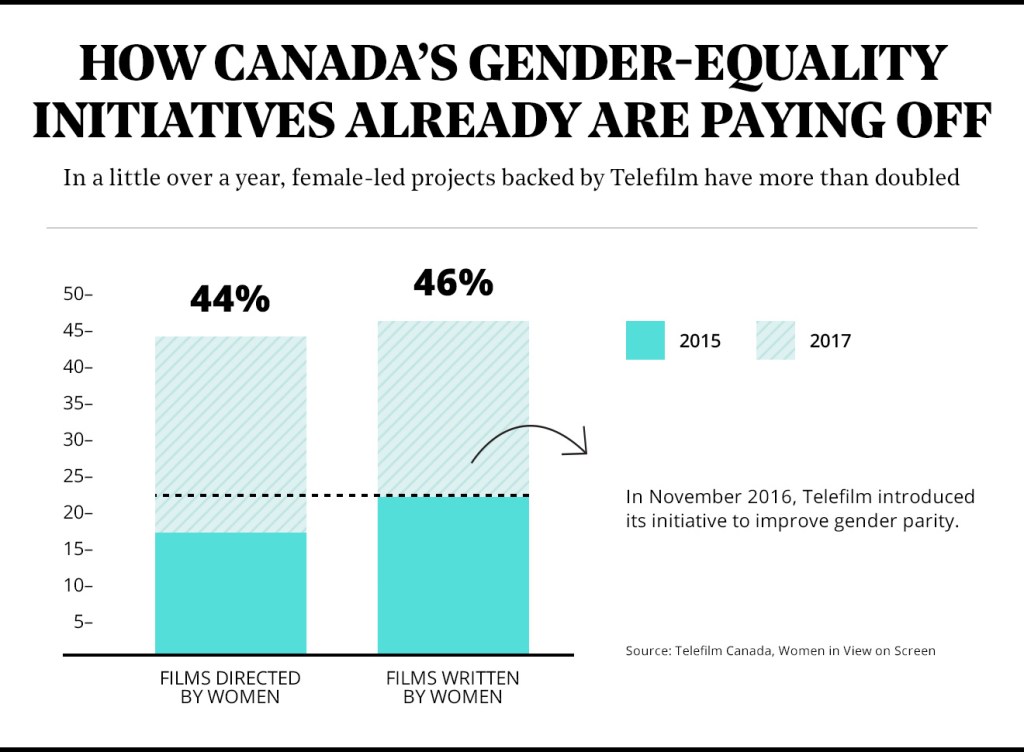 “I’m not being idealistic or doing favors,” she says. “It’s much more selfish — the workplace is more interesting and more normal when you have a mix of women and men.”

Marjolaine Tremblay, VFX producer and supervisor at Rodeo FX, insists that the Canadian industry needs to allow women to move from management and backroom jobs to active creative roles, including overcoming technical VFX challenges. “I have a great employer now that believes in all of my skill sets and supports me all the way,” says Tremblay.

Another point of emphasis for Minister Joly is creating a healthy environment in the Time’s Up era. To that end, she says the Canadian industry now has a zero-tolerance policy for workplace harassment.

“The #MeToo movement for us is clearly a fundamental change of culture,” she says. “It’s changing the way people will interact with each other and make sure there’s more respect between men and women, and ensuring the entertainment-sector workplace, as all workplaces, is much safer.”