There’s a lot of mystery and speculation about the new direction of the filmed entertainment unit of The Walt Disney Co. The largest of the traditional Hollywood studios is in the process of switching from a wholesale producer and distributor of content to a direct-to-consumer (call it “DTC,” or “Disney Play”) model.

Disney’s CEO, Bob Iger, revealed certain changes publicly in an earnings call in August. For example, numerous original projects currently in production — including the first live-action Star Wars series and, on the film side, a live-action version of the classic Lady and the Tramp — will be accessible via a new over-the-top streaming service, scheduled to launch late next year. By the end of 2019, all of the Disney features, TV and new-media programs that are not encumbered by existing distribution deals will be available for release under the new plan on a service designed both to rival the SVOD operators like Netflix and Amazon Prime Video and to deprive them of licensed content from the Disney empire.

So what is the sequential distribution plan likely to be? Let’s delve into the morass and make some educated guesses.

At the present time, Disney has four prominent labels for its features: Disney (both live-action and animation studios), Pixar Animation Studios, Marvel Studios and Lucasfilm. Those will undoubtedly continue, and (once its acquisition of 21st Century Fox assets is finalized) Fox’s major features that fit under the applicable Disney label (e.g., X-Men movies will move to Marvel) will be released in theaters for the usual initial run of three or four months worldwide. The midrange features normally produced by Fox 2000 or Fox Searchlight are likely to begin on Hulu if R-rated, or Disney Play if not, although my guess is that a few of them will have their first window theatrically. The pictures will then be available for sale or rent over currently existing electronic sell-through (iTunes) or VOD (Amazon) outlets, or physical devices (DVD, Blu-ray) for another three or four months. So for the first two windows, a Disney movie will be licensed on a wholesale basis, just as it is today. No changes in the existing model, although the time periods may be compressed.

But then, instead of licensing to premium pay or ad-supported services, a Disney movie will go to Disney Play (or, if it has an R rating, to Hulu — assuming Disney retains control at 60 percent when it absorbs Fox’s stake in the streamer). This will be on an exclusive basis subject only to pre-existing encumbrances to distribution outlets, such as the second premium pay license period of Starz or Netflix for Disney pictures, or to HBO for Fox pictures, both in the initial and second license periods. The same concept will apply internationally, subject to existing output deals with pay or ad-supported outlets.

This is a radical change from the current practice of all the major studios as well as the mini-majors in the U.S. On a worldwide basis today — given the phenomenal success of Disney pictures in recent years — a hit movie like Black Panther or Incredibles 2 probably generates more than $150 million from licensing to premium pay and ad-supported linear television over roughly nine years, commencing seven or eight months after its initial theatrical release. Disney will be giving that up in exchange for a hoped-for profit margin on subscription revenue that domestically will run around $6 to $8 per subscriber per month (and roughly the same internationally). This is betting the ranch! On the other hand, Nielsen research reveals that two affinity groups — family movie watchers and superhero franchise fans — overindex at 94 percent and 89 percent, respectively, in weekly viewing of streaming video. Both are Disney specialties.

The switch to DTC also raises an intriguing question for profit participants and guilds. In the wholesale transactional model of today, a studio reports “gross receipts” based on how much it receives from third-party pay TV services and ad-supported outlets (or, when the licensee is affiliated with the studio, there is a negotiation over the “imputed” license fee paid to the studio by its sister unit). What’s going to happen when all the features produced or acquired by Disney (and Fox, whether labeled or not) go into an in-house subscription pay service? Presumably, as is now the case with Netflix and Amazon, Disney Play will establish a rate card that will “impute” gross receipts. But will this be based on theatrical receipts (box office or film rentals), on home entertainment income or on some other criteria? Oh my!

Presently, both the Disney and Fox television arms produce in-house and for unaffiliated distributors/exhibitors worldwide. One would imagine that third-party wholesale distribution will gradually disappear in favor of in-house, using popular IP or original scripts as the base, whether live action or animation.

Currently, Disney’s owned linear entertainment television outlets are ABC (over-the-air network) and basic-tier cable channels (Freeform, Disney Channel and other kids’ channels). Sports are captured by the ESPN channels. The Murdoch family will retain its Fox broadcast network but will merge its cable operations (NatGeo, FX) into Disney’s. On the international front, Fox will convey its 39 percent interest (or greater) in Europe’s Sky Television and its wholly owned Star unit in India for Disney to control as part of the merger. Right now, the battle between Disney and Comcast/NBCU over control of Sky is undecided.

How will Disney executives make the decision whether its TV productions will initially appear on Disney Play or on its “traditional” outlets like ABC, NatGeo or FX? Unlike Netflix or Amazon, Disney has well-known and specialized brands as opposed to an “all you can eat buffet.” My guess, to copy a phrase, is, “If the shoe fits, wear it.” So the genre of the shows will be the predominant factor in determining the original exhibition window, which fits Disney’s “multiple app” branding to a T.

Today, regardless of the original exhibition window for a show (broadcast network, ad-supported cable, premium cable or SVOD), its owner can choose from a variety of outlets after its exclusive run; for example, an original ABC or FX program will next be exhibited on an internet site (with zero or reduced ad exposure) shortly after its initial network run and/or during gaps in the network schedule. After it has run for several seasons and is no longer in production, it will likely travel into syndication on television stations, on basic cable outlets and/or to SVOD outlets like Netflix or Amazon, depending on its earning capacity, genre or other factors. By contrast, it now would seem that a program originating on a Disney-controlled outlet would not be licensed to a third party but rather would move for its second and subsequent windows to Disney Play or Hulu for the rest of its existence. I would estimate that Disney is presently earning well over $2 billion annually from its wholesale television activities; again, the company is putting this revenue at risk against the potential profits to be derived from the new DTC activities. Keep in mind that the essence of a successful streaming offering is that it is exclusive and worldwide. It will take several years before this is the case with Disney Play.

Any TV programs or series now in production (whether Disney or soon to be Fox) will of course be subject to outstanding distribution agreements, which may delay the switch to exclusive DTC exploitation for years. And, similar to the challenges facing Disney on the theatrical side, Disney will have to find ways of convincing or forcing the traditional cable and satellite distributors and broadcasters worldwide to carry the owned programs and channels on its app or “bolted on” to the carrier; it’s likely the outlets will object that content now exhibited on their networks will be shifted over time to a new streaming service. What happens to the high retrans or affiliate pricing that Disney is now able to negotiate? Netflix has been able to get carriage from traditional MVPDs (and Amazon), where HBO Now has not, as yet. With the popularity that the Disney brands now enjoy, adding in ESPN+, another nascent streaming service, I’d vote for Disney to win most of the battles.

Just as with movies, for its in-house television activities, Disney will have to devise rate cards or imputed license fees to deal with profit participants and guilds. It seems likely that its first-run syndication activities will go away over time in favor of the in-house approach. And after the original exhibition window on ABC or its cable channels, there’s a serious question of whether or how much advertising will be featured. Will Disney Play offer a subscriber the choice of no ads for a higher price (like Hulu) or a reduced ad load limited to pre-rolls and the like? A lot to ponder! 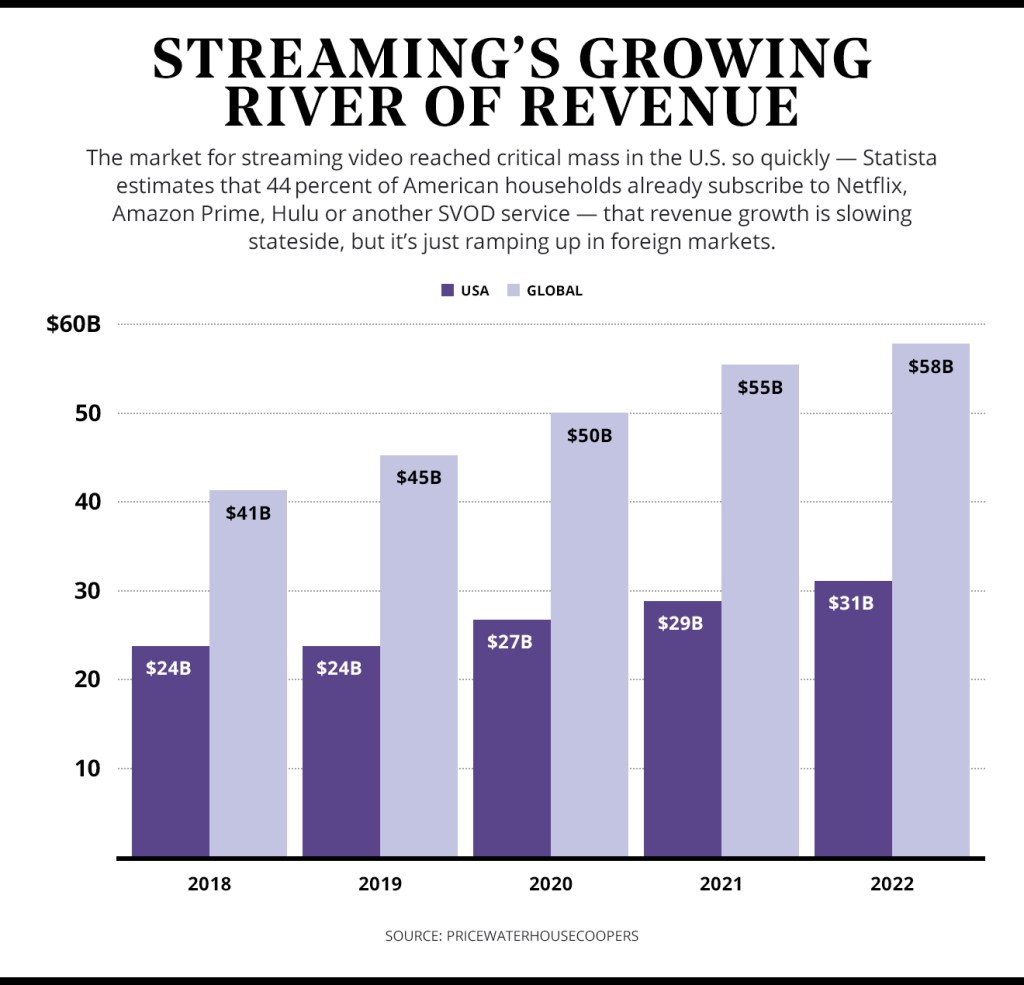 Why Bob Iger's Disney Success Comes With Some Awkwardness