It was November 1988 when a few dozen filmmakers came together in Berlin to present the first-ever European Film Awards. Film journalists would later label the EFAs the “European Oscars,” and indeed the nominees for the 30th EFAs, which will be held in Berlin on Dec. 9, include several titles — among them Ruben Ostlund’s art satire The Square, Robin Campillo’s AIDS drama BPM (Beats Per Minute) and Yorgos Lanthimos‘ surreal family tale The Killing of a Sacred Deer — that are likely to turn up at the Academy Awards in 2018.

But in the beginning, the 40-odd filmmakers who founded the European Film Academy (then called, simply, the European Cinema Society) better resembled a group of naturalists who were concerned with the preservation of an endangered species — in this case, European film.

“You have to remember, this was 1988: The Berlin Wall was still standing. Germany was still divided, Europe was still divided,” says Marion Doring, director of the European Film Academy — the group that votes on the EFAs — and, since 2004, the producer of the televised EFA ceremony. “At the time, European cinema seemed under threat: European films had almost vanished from European screens.”

Official figures, from the European Audiovisual Observatory, tell the story. While European cinema was once dominant at home, accounting for around 65 percent of the overall theatrical market in 1965, by 1988 Hollywood had taken over. In Western Europe in 1988, U.S. films accounted for close to 80 percent of ticket sales. The European film industry seemed to be falling into a kind of parochialism, with a handful of local-language comedies the only alternative to the main diet of imported U.S.-made entertainment. Europe’s grand cinematic tradition — films inspired by the works of Ingmar Bergman or Federico Fellini, Jean-Luc Godard, Francois Truffaut or Rainer Werner Fassbinder — was fading, or so it seemed to the filmmakers from across the continent that gathered in Berlin in November 1998 to hand out the first EFAs. Bergman, appropriately, oversaw the event as the association’s first president.

From the start, the EFAs wanted to be something different. Europe already had its own national film awards shows. Britain’s BAFTAs had been running since 1947, France’s Cesars since 1974. Even the Goyas, Spain’s national cinema awards, were founded a year earlier. But there was nothing to honor “European cinema” — works that reflected a common history and culture distinct from the films being produced in Hollywood.

“There was a lot of debate, at the start, as to what European film was, if it even existed,” recalls Doring. “We don’t have those debates anymore. It seems clear now that there is a distinct kind of European cinema. When you see it on the screen, you know immediately when you are watching a European film — whether it’s from North, South, East or West — and not something from Hollywood.”

That first awards set the tone. A Short Film About Killing, Krzysztof Kieslowski’s searing attack on the institution of capital punishment, won best film. Wim Wenders won best director for Wings of Desire, his multilingual drama set in no-man’s land between East and West Berlin that amounts to a spiritual lament for the political and economic conditions dividing Europe. It was clear: At the European Film Awards, commerce would take a back seat to politics.

In the three decades of the EFAs, there have been a few commercial hits among best film winners — Peter Cattaneo’s The Full Monty, Roberto Benigni’s Life Is Beautiful or Jean-Pierre Jeunet’s Amelie spring to mind — but the awards have been dominated by the kind of auteur cinema exemplified by the likes of Austria’s Michael Haneke and Denmark’s Lars von Trier (with five best film nominations and three wins each) or Spanish director Pedro Almodovar (six EFA nominations for best film, with two wins to date). When betting on the European Film Awards, the smart money is always on the somber over the superficial.

This year’s nominees are unusual for having quite a few laughs. Ostlund’s The Square is arguably the funniest EFA best film contender since Wolfgang Becker’s Good Bye, Lenin! won in 2003. Aki Kaurismaki’s The Other Side of Hope has plenty of laugh-out-loud moments, and even Lanthimos’ The Killing of a Sacred Deer and Ildiko Enyedi’s twisted love story On Body and Soul have doses of (dark) humor. But what unites them is a social conscience and a willingness to address serious subjects, whether it’s the plight of Syrian refugees in The Other Side of Hope, the battles of French AIDS activists in BPM or, in Andrey Zvyagintsev’s Loveless, the state of despair in Vladimir Putin’s Russia.

“It’s not about the sizzle, it’s about the steak,” says EFA deputy chairman Mike Downey.

But if culture, not commerce, are again in focus at the 2017 EFAs, the awards also have a commercial impact. When Maren Ade’s German dramedy Toni Erdmann took home five EFAs in 2016 — including best film and best director — it “really helped the film’s release, particularly in Europe,” says Erdmann producer Janine Jackowski. “It was the first major award we won, and it definitely got things rolling.” 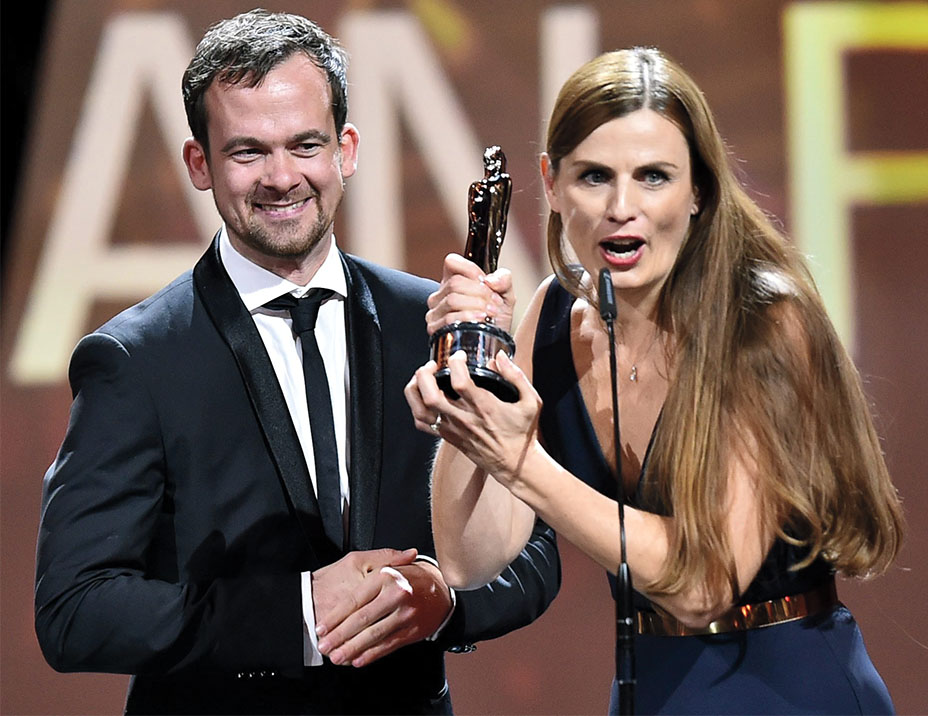 Toni Erdmann would go on to pick up a trophy case of honors, including an Oscar nomination for best foreign-language film. Toni Erdmann missed out on Oscar glory, losing to Asghar Farhadi’s Iranian drama The Salesman, but, over the years, the EFAs have proven remarkably adept at picking Oscar winners. Films that followed up an EFA best film nod with an Academy Award include Pawel Pawlikowski’s Ida, Paolo Sorrentino’s The Great Beauty, Almodovar’s All About My Mother, Benigni’s Life Is Beautiful, Haneke’s Amour and The Lives of Others from German director Florian Henckel von Donnersmarck.

One thing that distinguishes the EFAs from the Oscars, however, is politics. On stage at the EFAs, overt political statements are the rule, not the exception. Last year, EFA chairwoman, and Oscar-nominated director, Agnieszka Holland opened the awards with a mock video of herself sitting at the desk in the Oval Office. Flanked by security guards holding machine guns aloft, Holland said she would not leave the White House until “democracy and tolerance” were restored, an obvious dig at the recent election of Donald Trump. Pussy Riot’s Maria Alyokhina got a standing ovation from the EFA crowd when she called on Russia to release Oleg Senstov, the Ukrainian director currently serving a 20 year prison sentence on dubious charges of supporting terrorism.

Over the decades, the politics of the EFAs has been remarkably consistent.

“The EFAs were always for openness, for artistic freedom and always for a united Europe,” says Doring. She recalls the second awards, which took place just a week after the fall of the Berlin Wall on Nov. 9, 1989. “Everyone came together; it was euphoric,” she says. “I remember Krzysztof Kieslowski saying, ‘I’ve got to go back home to Poland, everything is going to change now.’ Jiri Menzel [Closely Watched Trains, Larks on a String] said the same thing: “I have to go to Prague.” They were so full of hope. And so much did change. Europe united. Which makes it so sad now to see how Europe is moving in the opposite director, with new boarders going up and with Britain leaving.”

The subject of Brexit will hang over this year’s EFAs, even if the U.K.’s decision to leave the European Union won’t impact the awards. The European Film Awards have always had a broader vision of Europe than the 28 countries that make up the EU. Filmmakers from Russia, Turkey, Israel and Palestine all qualify for the EFAs, and Brit directors, post Brexit, will continue to do so too.

“[We made] it clear to all our British members, colleagues and friends from the U.K. industry that they are still very much a part of our European family of cinema and that they remain a crucial part of the creative cultural lifeblood of the European film experience,” says Downey.

Along with Brexit, the European Film Awards face the challenge of an increasingly insular Europe, with many countries — particularly in the former East — seeing a rise in xenophobia and anti-EU nationalism. But don’t expect a more right-wing EFAs. The European project might be under attack, but the European Film Awards are holding to their vision of an open, multicultural European cinema.

“This is just the reality of our business,” says Doring. “Every European film these days is a multicultural experience. Most of them are co-productions between several European countries and the crews are mainly multilingual and multinational. For Europe, that’s absolutely normal. And that’s what makes our award, and the academy, so important, particularly these days when the achievements of the last 30 years seem under threat.”