Host or no host? Truncated run time or let it play? Boot some categories to the commercials? The Academy’s various controversies this season all have stemmed from its attempt to boost steadily declining ratings, which bottomed out last year in every key demographic.

Among the all-important 18-to-49 demo, the show notched a 6.8 rating, down a whopping 25 percent from a year earlier, while the even more precious 18-to-34 set dipped 29 percent. But as younger viewers continue to opt out of the live telecast (and linear television in general), it seems the mad dash to stop the hemorrhage may have the Academy and host network ABC putting effort in the wrong places.

An informal THR survey of Hollywood millennials — a sampling of dozens of budding executives, writers and reps in that blessed 18-to-34 demo — suggests that these viewers are less interested in a host than they are in a fresh, entertaining show. “The format is so predictable,” says one 31-year-old production executive. “It’s a celebration of entertainment, so shouldn’t it be entertaining?”

Veteran producer Casey Patterson, who courts younger viewers with the MTV Movie and TV Awards and Lip Sync Battle, notes that the value proposition of awards shows has significantly shifted. The Oscars have long offered entree to the medium’s biggest stars, but in a social media age, fans no longer need a telecast to catch a glimpse.

“When you think about the fact that you have access to celebrities at any given time ­— their hobbies, passions, even their animals — tuning in to awards shows to [hear them] read predetermined copy for two minutes is less valuable to audiences,” says Patterson.

The Politics of Oscar: Inside the Academy's Long, Hard Road to a Hostless Show

Per THR‘s survey, suggestions ranged from abolishing movie clips (“watch the trailer if you want”) to integrating ads into the show instead of commercial breaks to reduce the run time (“like baseball!”). But, overwhelmingly, the younger viewers said they’re interested in off-the-cuff moments — ones that don’t involve politics or inside Hollywood jokes. “[The bloat] is all these forced bits and unfunny takes on the industry. Cut those and show the presenters having a good time,” offers a 29-year-old writer and development exec. “If you get to watch The Rock and, like, Diane Keaton present, it’s, ‘Wow, that’s weird and fun.’ Just let them riff for 30 seconds.”

The 2018 ceremony’s “weird and fun” moment belonged to presenters Tiffany Haddish and Maya Rudolph: High heels in hand, they talked awards fashion and Hollywood diversity. More than 11,000 people signed a petition for the duo to host this year. (Sources say they weren’t approached.)

But if the Academy had stumbled onto a standout moment, it seemed incapable of capitalizing on it. In fact, video of the duo is buried on the Academy’s YouTube page, where it’s titled “Heaven Is a Traffic Jam on the 405 wins Best Documentary Short Subject,” and a thumbnail image features the film’s little-known director, Frank Stiefel. A paltry 17,000 have found it. By comparison, a shaky bootleg YouTube supercut of Rudolph and Haddish has garnered nearly 780,000 views.

At Den of Thieves, the outfit behind MTV’s recent run of Video Music Awards, Evan Prager and Jesse Ignjatovic recognize the value of such moments and try to pair talent accordingly. The partners equally prioritize the nonlinear audience, whose GIFs, YouTube clips and Instagram videos live on to mass impressions long after a theater clears out and the red carpet is rolled up.

“You create a moment that they can all engage with and curate themselves,” says Prager, who notes that they are consciously producing for “conversation pieces that light up social.” Everything from the planned (an epic Beyonce musical performance) to the unplannable (Kanye West announcing a presidential bid). “You gotta put the right people in the room. Give them the space to create the magic.”

“[Younger viewers] consume these shows. They just do it in a different way,” adds Ignjatovic. “Hopefully the people that need to justify putting on these shows can find a way to monetize the way people are viewing.”

The Academy’s if-we-build-it-they-will-come attempt at attracting a younger viewership to the 2019 show has proven, thus far, problematic. Maybe it’s time the Academy goes to the viewers, wherever they may be. 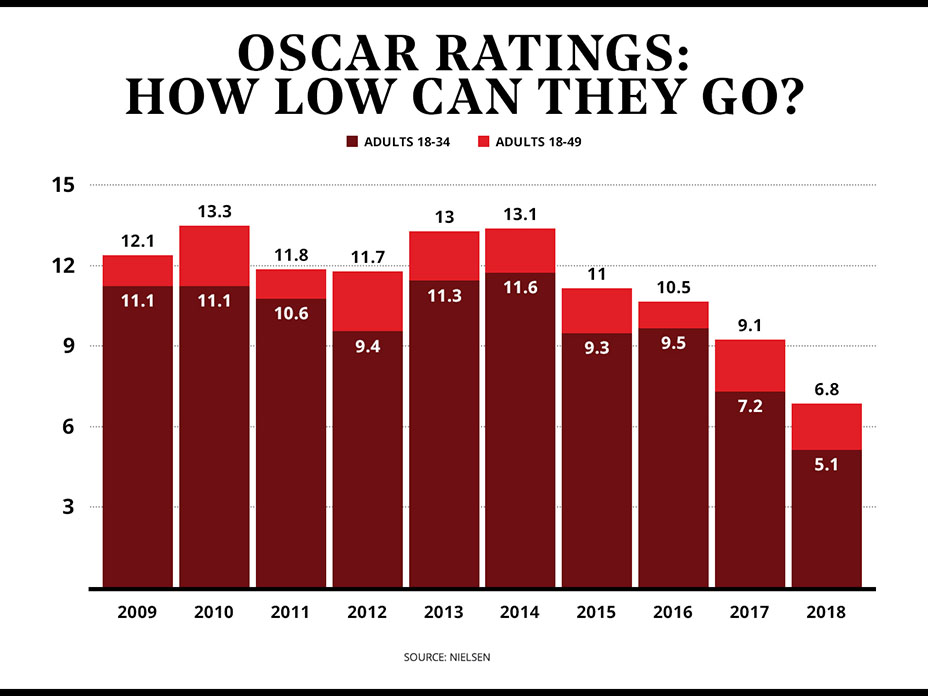